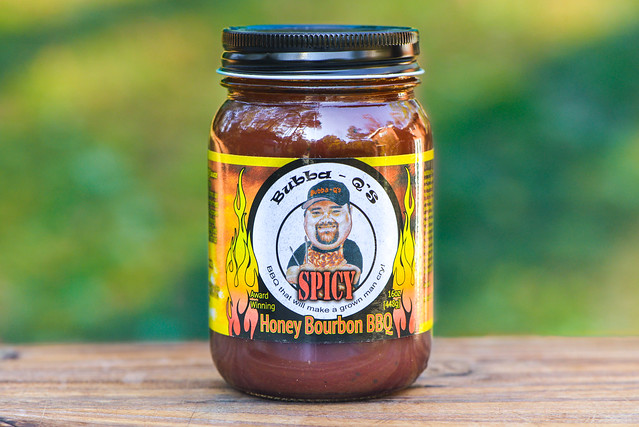 A sauce packing a lot of complexity and great punch of heat, Bubba-Q's Spicy is ready to handle just about any meat you want to slather it on. 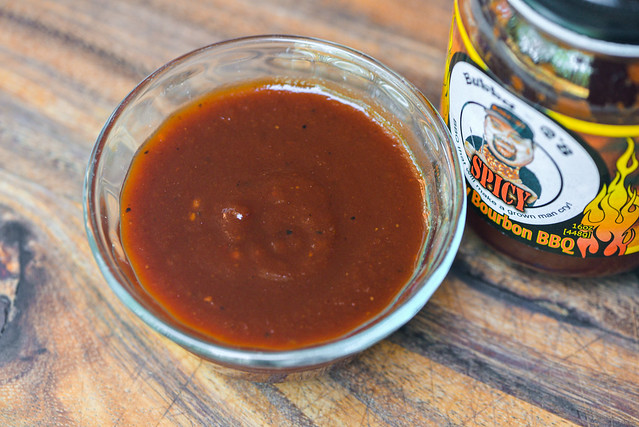 Bubba Knapp started out his barbecue career in 2004 when he opened a small, family-owned catering business. He then began getting into competition barbecue where he perfected his craft and developed his own unique rubs and sauces that helped with his success on the circuit. In 2010 he took the next step by opening his own restaurant, aptly named Bubba-Q's, which featured his signature barbecue, as well as steak. Bubba continues to operate his restaurant with his wife, Sabrina, in their home base of Ottumwa, Iowa. Bubba also sells two sauces and one rub, both his own secret recipes.

A strong tangy tomato aroma fills the nose on first whiff of this sauce. That acidic profile has a bit of contrasting sweetness behind it which does smell uniquely like honey. Adding to the barbecue complexity are the common Worcestershire and molasses as well as a dash of onion. There's a faint smokiness in there as well along with a more prominent pepper layer that smells both earthy and spicy, adding a little tickle to the nose.

This rusty red sauce is semi-glossy and has a fair amount of texture to it from spices and veggie pieces. While the sauce is opaque, you can still see a lot of spices that come in small, medium, and large red, white, orange, and black specs. The sauce's thickness hits right in the center of the scale and its consistency is slightly syrupy. From a suspended spoon, the sauce first falls in one large drip followed by a lot of a smaller, quick drips. When the sauce slows down, two or three more drips release before ceasing and leaving a medium coating of sauce left clinging to the silverware.

A sweet honey start quickly gains a sugary ketchup flavor on first taste of this sauce. This sweetness is short lived as vinegar quickly overtakes it and Worcestershire comes in and adds its strong complexity. There's undertones of molasses, onion, and garlic next, but those are soon drowned out by the flavor of the peppers that start with a medium spiciness and end in a mouth burning crescendo. In the aftertaste, there's still remnants of things that came before, primarily an acidic tomato, mellow molasses, and medium hit of Worcestershire. 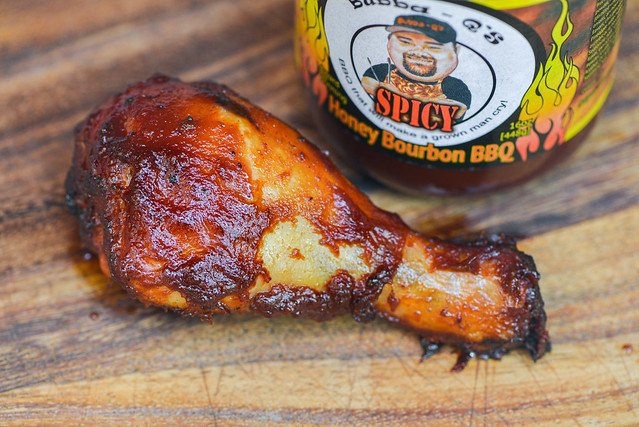 This sauce coated the chicken in a medium, uneven layer that then baked down in a patchy manner over indirect heat. The sauce not fully adhering to the chicken led to higher than normal sauce loss when moved to direct heat and just little spots of caramelization here and there. While the sauce may not have had totally ideal grilling properties, the flavor was very well rounded and balanced. The sweetness gained a little prominence, while the spiciness mellowed, leading to more equally distributed layers of flavor that still had all the complexity from the vinegar, Worcestershire, and spices still intact. The heat did continue to build up more and more upon subsequent bites, eventually leading to a nice lip tingle by the time the chicken leg was done. The little bits of sauce that did caramelize tasted especially good with their more concentrated sweetness and spices.

I was really digging this sauce out of the jar, then felt a little let down when I saw it not performing great on the grill. Often when this happens, the sauce doesn't hold up that well after being cooked and I end up recommending it mainly for finishing applications, but Bubba-Q's surprised me when that somewhat spotty layer of sauce on the chicken tasted even better than it did out of the jar. So I can endorse this as an all around versatile product for use both on and off the grill, the only thing to note is you may not get that picture perfect sauce coating, although in the backyard, tastes reigns supreme over looks in my mind. That makes Bubba-Q's Spicy sauce a good choice if you like a nice wave of heat backed by a full flavored, complex barbecue profile that will taste great on probably just about any meat type you want to spread it on.