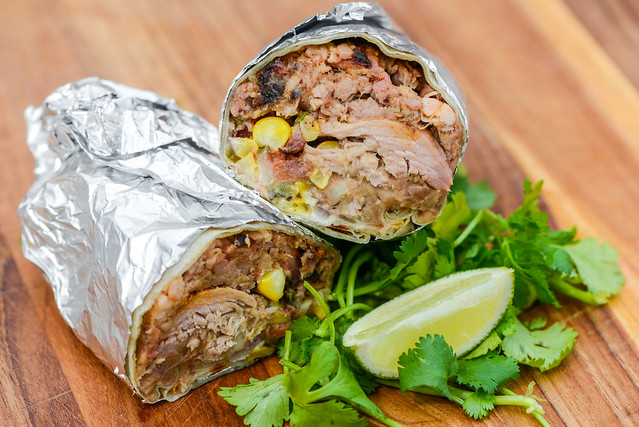 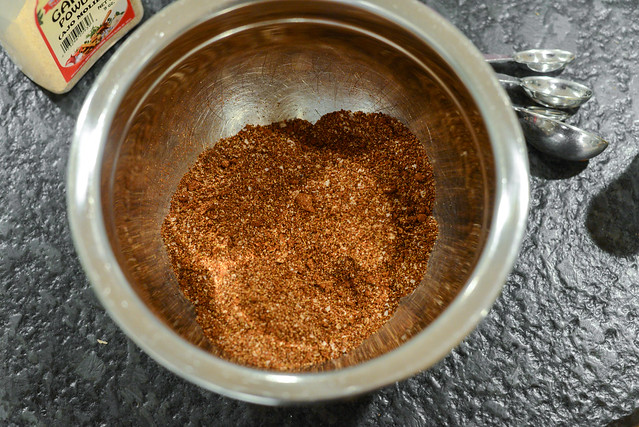 Like normal barbecue, I started this recipe with a rub, but where I would usually try to strike a balance between sweet, earthy, and spicy with my spice mixture, I let the sugar component take a back seat in this one. The idea was to really feature the flavors of the chilies, of which I used combo of homemade chili powder comprised of anchos, guajillos, and arbols, and then also chipotle powder. This formed a smoky, earthy, and slightly fruity base that I built upon with salt, oregano, garlic powder, onion powder, cinnamon, and a small amount of brown sugar. I felt this had a clearly Mexican slant with a bit of American barbecue mixed in, which seemed like the right initial direction. 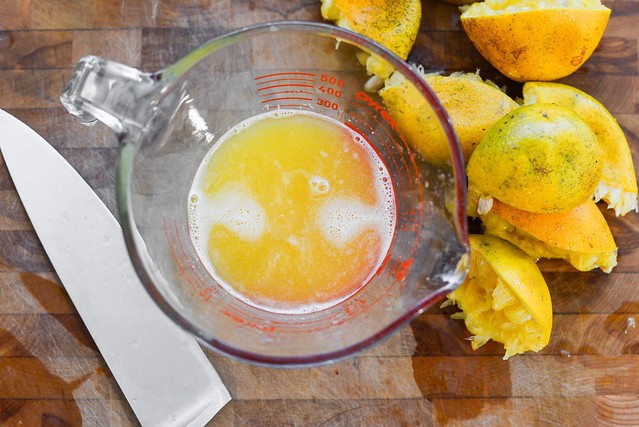 Next, for the injection that I usually start with apple juice, I began by using freshly squeezed orange juice instead. I got the idea from carnitas, which tend to be marinated and/or cooked with oranges. I also added sugar and salt, which would help with seasoning and moisture retention, and then brown sugar and cider vinegar as well to add extra sweetness to contrast against the earthy rub along with some tanginess. 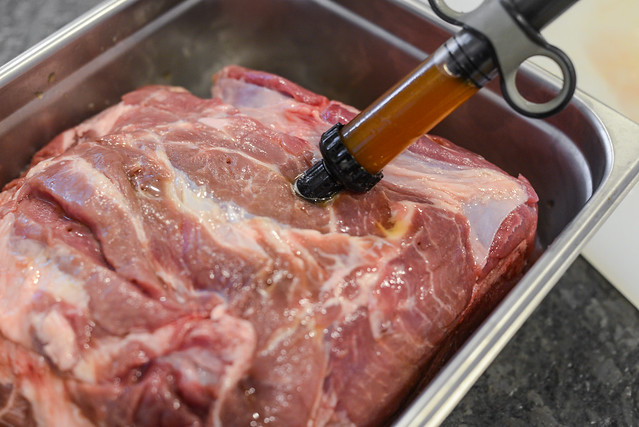 Once done, I injected the pork butt with about half of the liquid. I personally like to do this the night before I smoke the butt, thinking the salt and sugar will act as a brine and, with some time to rest, will result in juicier end results. I have never done a side-by-side comparison though against a freshly injected butt, so I can't say for sure yet that my intuition is correct here. 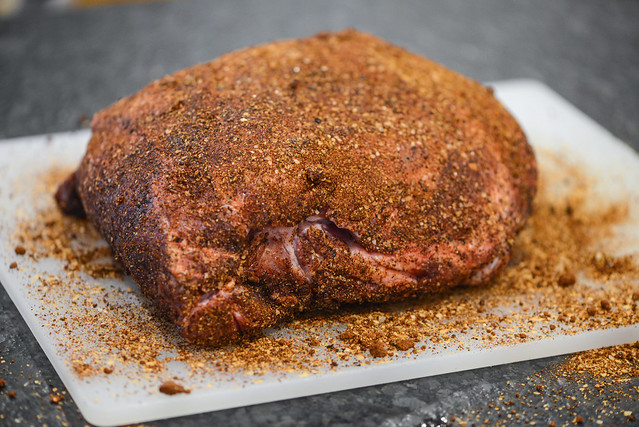 Once injected, I coated the pork completely with the rub, wrapped it in foil, and placed in the fridge overnight. 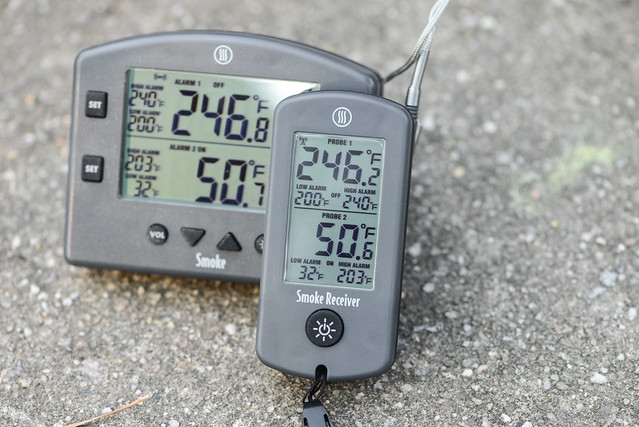 When it was time to smoke, I fired up my Weber bullet with charcoal and a few chunks of pecan, and once the temperature hit between 225-250°F, I placed the pork in. I used the Thermoworks Smoke to keep an eye on the temperature. I was provided this thermometer to try out, which is really designed well for smoking, having two channels that can monitor both the pit and the meat at the same time, as well as a remote display so you can see how things are going without having to be next to the smoker. 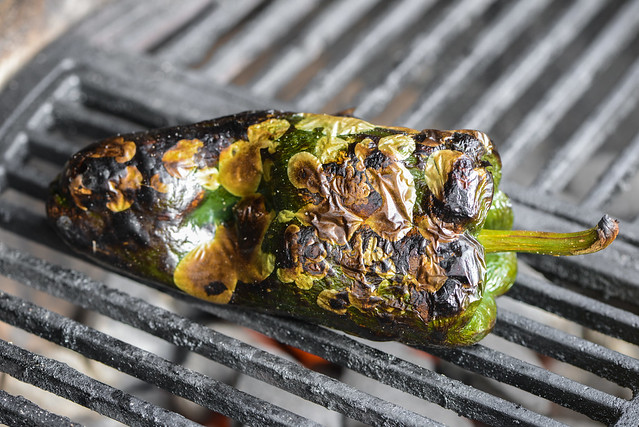 The benefit with something that takes 12-14 hours to cook is you have a lot of time to do other things. I made use of part of this downtime to put together a fresh salsa I could use in the burritos. I started it off by grilling up a poblano pepper until it was completely blackened as well as a couple ears of corn until they developed some attractive charring. 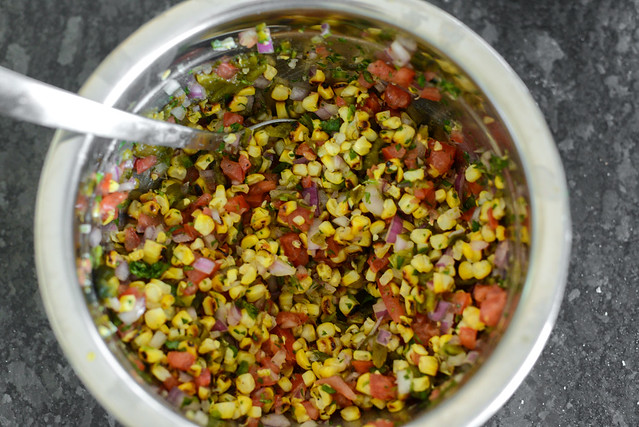 After letting each rest, I peeled and diced the pepper and cut the kernels from the cobs. I mixed those with fresh tomatoes, red onion, jalapeño, cilantro, and lime juice. I ended up with a salsa that had a bright, fresh flavor along with some hints of the grill, which I thought would be a great compliment to the smoked pork in the final burrito. 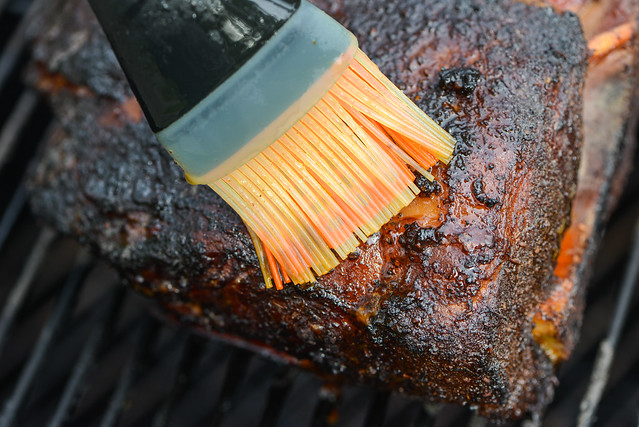 In the last four or five hours of cooking, I used the remaining remaining injection liquid as a mop. I like to apply liquid to smoking meat to both help preserve the color of the bark and add complexity to it. In this case, I was hoping to add some extra sweetness and acidity to compliment that chili-heavy rub. 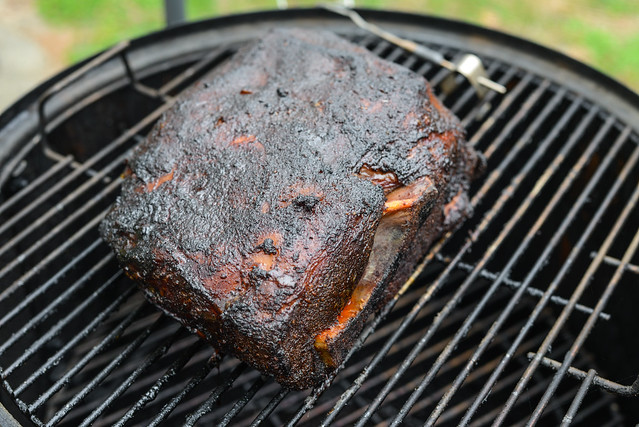 After 14 hours of cooking, the meat hit between my target temperature range of 198-203°F, at which point I removed the shoulder, wrapped it in foil, and let it rest in a cooler for an hour. I've found over the years that allowing for at least a 30 minutes rest, usually longer though, actually outputs juicier meat, so it's something I try to always budget the time to do. 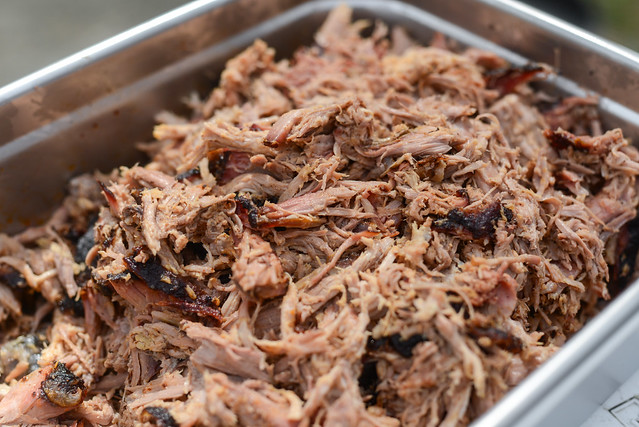 After the rest, I used my bear paws to shred the shoulder in no time. I was happily greeted with glistening meat, and I was really thrilled with how it tasted. It definitely tasted like barbecue with a forward smoky pork flavor, but the earthy rub and orange-based injection gave it a clearly Mexican-influenced flavor that would be a bit unexpected, but very welcomed, for pulled pork. 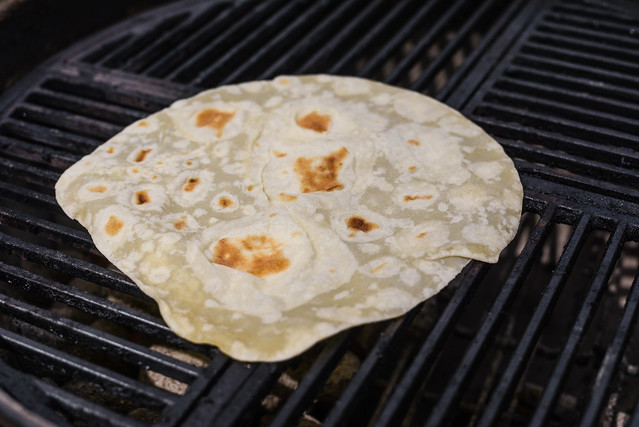 I couldn't wait to see how it worked in a burrito, so I quickly heated up the oversized flour tortillas I had also used the smoking downtime to make. 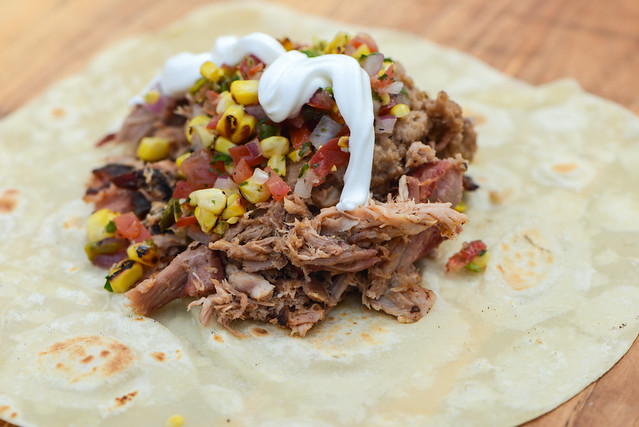 Then in the center of each tortilla I added a heaping pile of the delicious pork, some refried beans, a couple spoonfuls of the corn salad, and a line of sour cream. Next I folded over the sides of the tortilla and then rolled it shut to make the burrito. 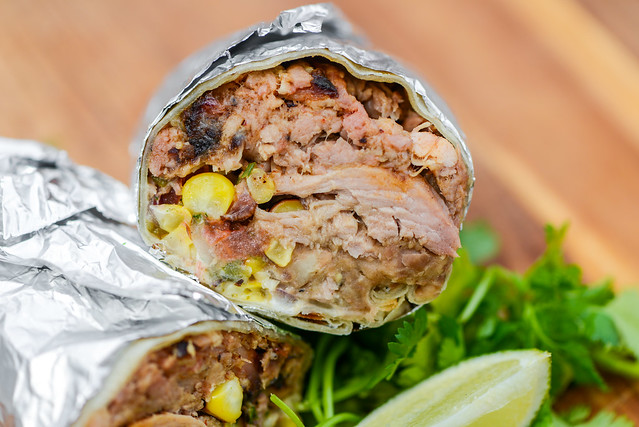 My only complaint with this end result really was I wished I put something green in it to make it look more appetizing in the picture, because I think the flavor was incredible and the photo doesn't do it justice. The pork took center stage, creating a smoky, hearty foundation. Then the beans added another dimension of pork-iness along with a new, creamy textural component. Each of those were super heavy, but the salsa saved the day with a contrasting freshness that was really needed. Then tangy sour cream was just icing on the cake to make the whole thing come together into an amazing burrito that utilized a pork shoulder that's great at feeding a crowd (the final recipe is scaled to eight burritos, but you can get way more than that out of the pork), but in a way that breaks from the standard barbecue pulled pork sandwiches.

Familiar smoked pork shoulder gets done up with Mexican seasoning and served as burritos to output a real change from the usual barbecue pulled pork sandwiches.