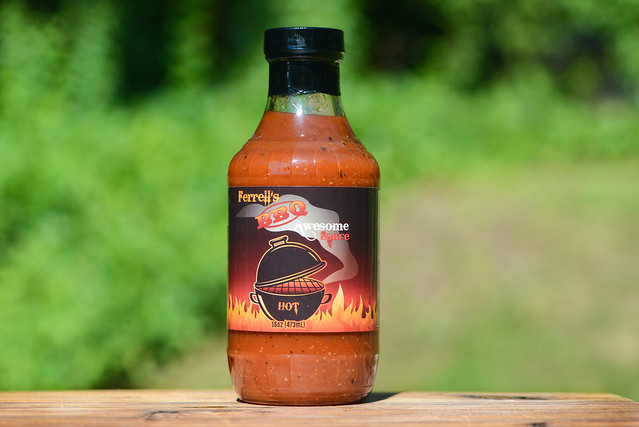 A standard North Carolina vinegar forward flavor is given a lot of great layers of flavors by way of mustard, Worcestershire, and peppers to create a sauce well prepared to dress piles of smoked hog. 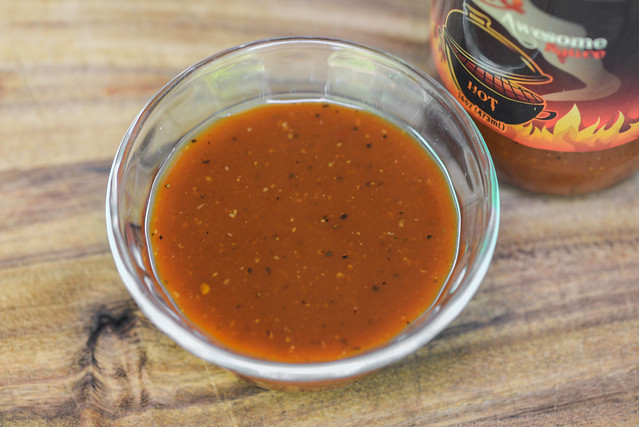 It's not often I get a sauce that I can't dig up some background on, but Ferrell's BBQ Awesome Sauce is one of them. I picked up this sauce at one of my local groceries and after some internet searching, all I could really unearth about its origins is that it's a product of Ferrell's Backyard BBQ, a husband and wife team of Brent and Christy Ferrell out of Durham, NC. Their sauces, which total five different varieties, seem to be available in a number of local groceries in the Triangle area, as well as in Wilmington, but not available for sale online at the time of writing this.

The first thing that strikes you as you take in a nosefull of this sauce is a strong, tart vinegar that imparts a little burn on the nostrils. Sitting right behind that dominant sourness is a balanced combo of sweet tomato ketchup and pungent mustard. Upon a few deeper whiffs, a more complex barbecue aroma emerges with distinct notes of Worcestershire and garlic along with earthy and spicy peppers.

This sauce has a rusty red hue, is very smooth, and has a glossy sheen. It's mostly opaque, but it's easy to see a lot of spices that come in both medium and small specs that are white, red, and black. The sauce has a medium-thin consistancy and it falls in a fast and even pour from a suspended spoon at first. It then changes to many quick drips before ceasing and leaving a thin coating of sauce left clinging to the silverware.

First taste of this sauce is very vinegar forward. That initial tartness only increases as it starts to settle on the tongue and a sharp mustard pungency makes its way in. A sweet tomato flavor lingers in the background, but never gains enough prominence to come out from behind the heavy tang. The longer the sauce sits on the tongue, the more the other elements make themselves known, most notable of those being Worcestershire and garlic. Then, right at the end, not only does the vinegar get dialed up enough to drown out all sweetness, but a prominent heat comes in and creates and aftertaste that is very tangy and spicy. 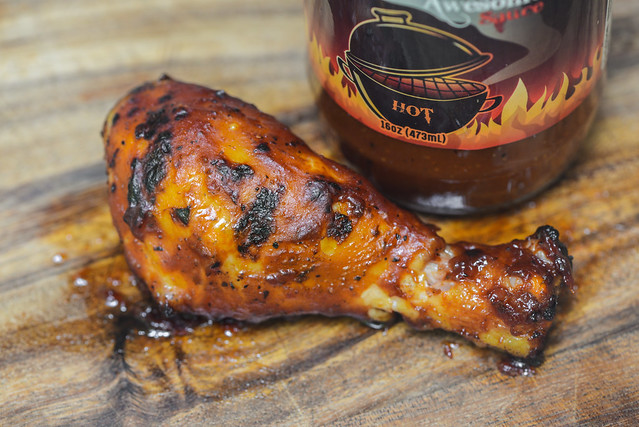 This sauce coated the chicken in a thin, even layer that baked down and built up well after multiple brushes over indirect heat. When moved directly over the fire, there was some good caramelization with only minimal charring. The flavor was primarily tart and pungent with very little sweetness to be had. The pepper and other spices also continued to play prominently into the flavor profile, adding a little burn and extra complexity to the vinegar forward taste.

For me, I needed some time to cozy up to this sauce. I thought it tasted really great out of the jar with its strong vinegar flavor that was well layered with mustard and spices that gave if a profile that had me tasting something new in almost every spoonful. After it was cooked though, I was surprised that all the sweetness disappeared, and while that's not a bad thing, the first few bites of the chicken left me feeling like something was missing. By the end of the leg though, I was sold, and dug the tart, pungent, and spicy flavor that worked with, and didn't mask, the meat. Of course, like with so many North Carolina sauces, this one felt most destined to be married to a pile of chopped hog or pulled pork, where the extra tang would help cut through the fat and enhance the meat. The added complexity and spice of this sauce would certainly bring a uniqueness to the party, making it a good choice for your smoked pork needs.