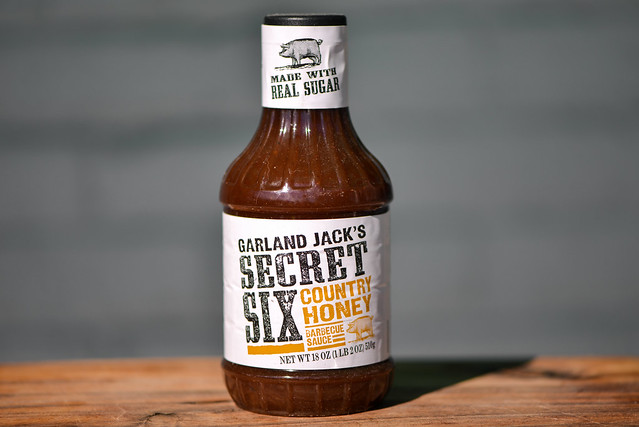 Its "Country Honey" label lets you know upfront that this is one sweet sauce, but it's not overpoweringly sugary, making it a decent supermarket choice for those needing to feed their sweet tooth in barbecue sauce form. 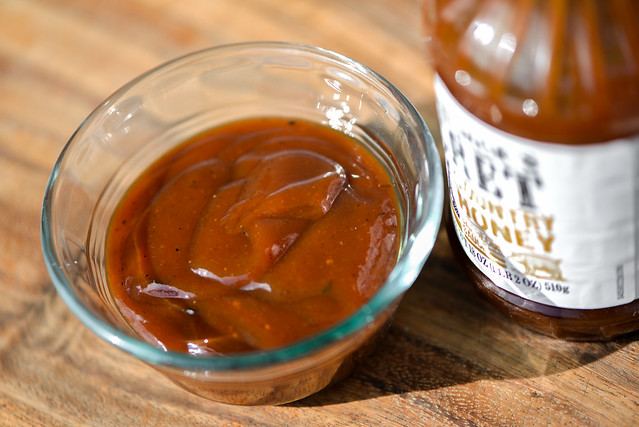 Get ready to see a few more Garland Jack reviews in the coming months as I finish out a series of six different bottles sent to me to try out. This one brings me to the fourth in line—Country Honey—out of the full the suite of offerings by this sub-brand of Kraft. Not widely available online, these sauces do have decent distribution throughout grocery stores, at least in areas I've travelled in. They fit into the category of inexpensive off-the-shelf sauces, but Garland Jack differentiates itself by uniquely tailoring each recipe more beyond the standard, where adding a little extra cayenne is enough to make a sauce "extra hot" or "blazin'."

Sweet and smoky is the best way to describe this sauce. A first whiff brings a strong molasses aroma with a pungent hickory liquid smoke. The heavy smokiness gives it a bit of a unnatural smell, which is brought a little more off by an imbalanced vinegar that traverses between the foreground and background. There's hints of spices by way of onion and garlic, but nothing that stands out as a potential heat source, leaving the aroma primarily defined by its sweetness.

This dark brown sauce with a reddish tint weighs in just north of medium on the thickness scale. From a suspended spoon the smooth sauce falls in two or three large drops, then stops completely, leaving a heavy coating of the sauce left securely attached to the silverware. It has a syrupy consistency which revels a fair amount of spices dotted throughout.

The first mouthful of this sauce is sugar on a spoon. Maybe that's oversimplifying it, as sweetness has some depth from molasses, but it's still primarily sugary and nothing else. As the sauce settles on the tongue, the other players in the game begin trying to make moves to grab some of the spotlight. First in is honey, which is obviously more sweetness, but it does give the sauce a welcomed new dimension. Then vinegar starts to bring its tang, which remains very mild. Next the spices add a depth with onion and garlic, then just the slightest hint of heat pops up, but is instantly knocked back by liquid smoke. As the smoke starts to turn pungent, the sugar comes back in and puts it in check, keeping it balanced and leaving a sweet and smoky aftertaste. 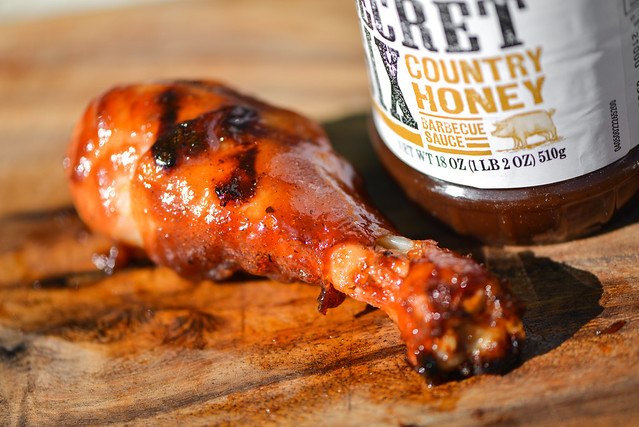 The sauce coated the chicken evenly, then baked down well over indirect heat. When moved to direct heat, there was some light caramelization without burning. The extra sticky sauce that coated that chicken leg had turned from sweet and tangy to nothing but sugar. Sure it was damn sweet, but it wasn't sickeningly so, as more honey flavor came out ,as well as molasses, to give it a layered sweetness that had a hint of smokiness to it.

The Garland Jack brand continues to impress me as a low-cost supermarket staple. Sure the sauce had problems—too much sugar that's off balance with the vinegar and is so strong that it masks other flavors—but it performs well on the grill and nothing is offensive about it, like some other brands that can be thrown in the same category. In my mind, that makes Country Honey a decent middle-of-the-road sauce. It's Squalin' Hot cousin may have better build up of flavors, but Country Honey is certainly going to be more crowd pleasing than the jar of overly molasses-y Sweet Brown Sugar. I think the honey is this sauce's saving grace, which is the sweetener of my choice to add depth while keeping the molasses or sugar in check by not letting one or the other become too dominant. So if you're in a supermarket and on the lookout for a good bargain, you'll find it with Garland Jack's Secret Country Honey Barbecue Sauce, which will leave any meat you brush it on with a pleasant sweetness with little tang, and no heat.