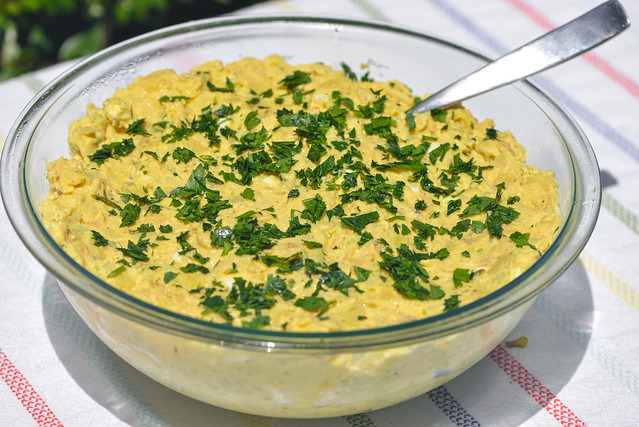 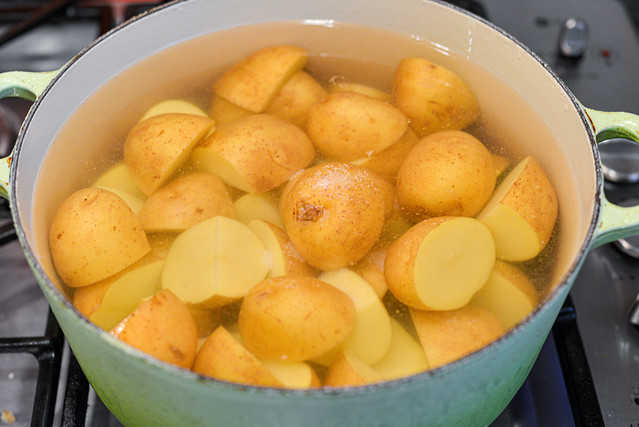 I cooked this up for my large Carne-val blowout, so the recipe is designed to serve a lot of people. With potatoes though, a larger recipe means more effort because of the extra prep time that spuds require. I'm not sure I really handled the potato production in the most efficient manner here. I used Yukon golds for their soft and creamy texture that makes them great in potato salads. I figured that, after boiled, I could easily pull away the skins, so didn't peel them prior to boiling. That was mostly true, but it was also a lot of work to go through each wedged spud and remove the exterior, so I wondered if peeling and cutting into smaller chunks prior to cooking could have saved me a little effort. 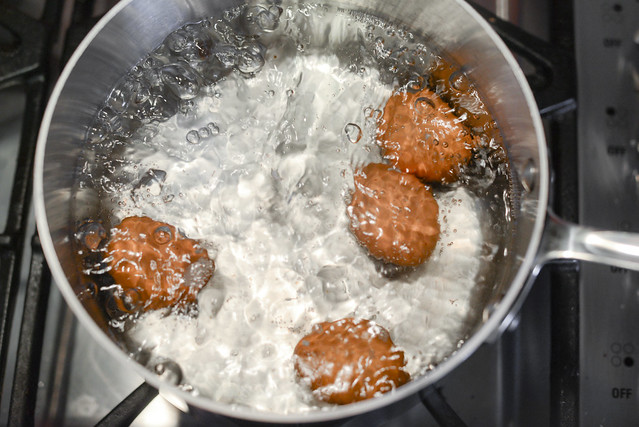 The idea to make a honey mustard potato salad actually came from me realizing that it's no longer available at Wing Stop, and that was my side of choice there. My final recipe didn't really come out like their potato salad—I ended up liking mine better—but I did love the soft and little chewy texture of hard boiled eggs in their salad, so made it part of mine as well. For the best hard boiled eggs, you'll want to set them in boiling water for 30 seconds, then cover, reduce the heat to a simmer, and cook for 11 minutes. Then after 15 minutes in an ice bath, they should be easy to peel and be perfectly cooked on the inside. 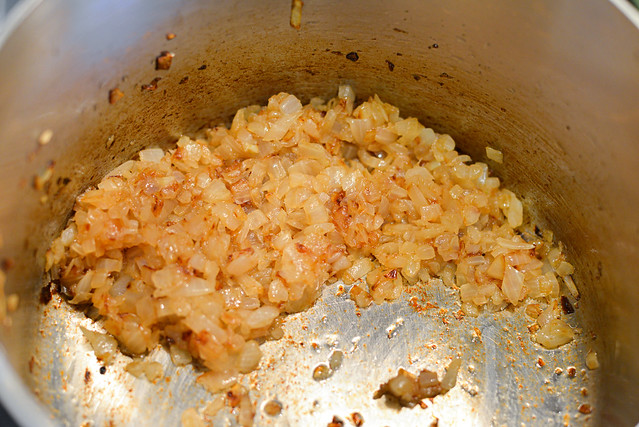 Another feature of that Wing Stop salad was its sweetness and that led me to sauté the standard onions instead of putting them in raw. I thought the boost of sweetness the onions get when cooked until golden brown would get me to the final flavor combination I was after. 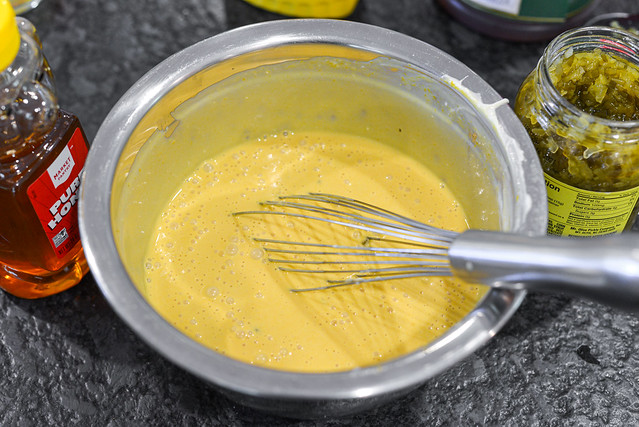 The dressing was the most important factor in this recipe, so nailing it was of top importance. I began by adding equal amounts of mayo, sour cream, yellow mustard, honey, and vinegar and started increasing the portions of each until I thought it tasted appropriately sweet, pungent, and tangy. Then I added in sweet pickle relish, since that's a potato salad standard, along with a little paprika as well. 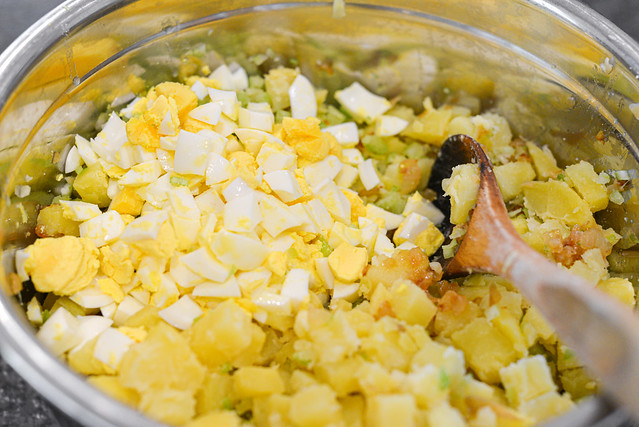 Since onion usually lends part of the crunch in potato salad, and I had rendered those soft for this recipe, I went in pretty heavy with the celery to get a contrasting texture in there in a meaningful way. Once the celery was finely diced, everything went into my large mixing bowl and I began tossing. 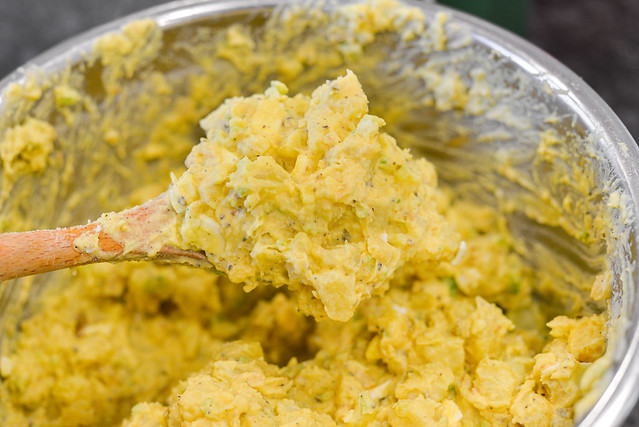 I tried to do this as gently as I could to keep the spuds from turning completely into mashed potatoes. I was looking for a consistancy where there were still good chunks of in tact potatoes nestled in a coating of light, creamy mashed ones. As soon as everything looked well combined, I stopped tossing and transferred the salad to its serving dish, covered, and let sit in the fridge overnight to throughly chill. 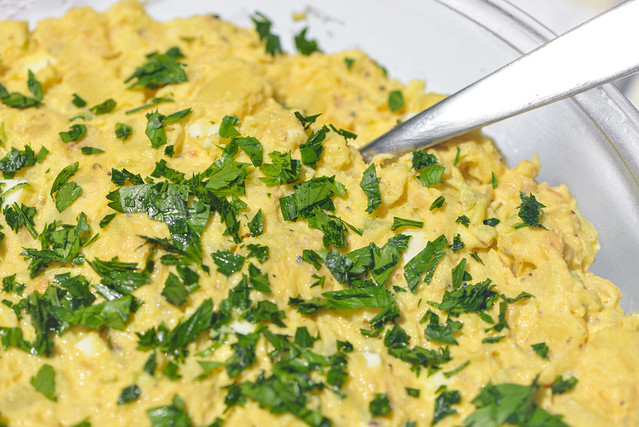 This may have just been the largest batch of potato salad I ever made, but it was certainly needed with a large crowd and a menu that weighed heavily on smoked meats. The salad provided a contrasting coolness with enough tang to help balance out our palates throughout a day of very hearty eating that included a lot of fat. The flavor was incredible, with equally strong sweet and pungent component that made it stand up against all the robust meats it was being enjoyed alongside. This side recipe is certainly a keeper, and it will most definitely be something I cook on those days I'm taking a break from grilling and being an guest instead, like Fourth of July.

This potato salad is big on flavor with a strong cooling component to make it fit in extremely well into a menu loaded heavier meats and other grilled goodies.