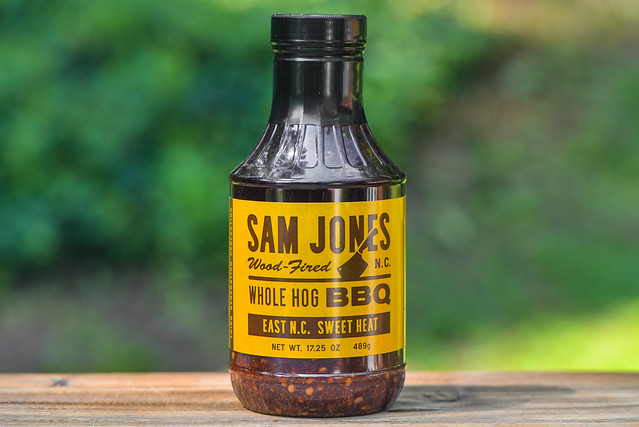 Delivering an exemplary Eastern North Carolina tang and heat, this sauce is destined to make your smoked pork really shine. 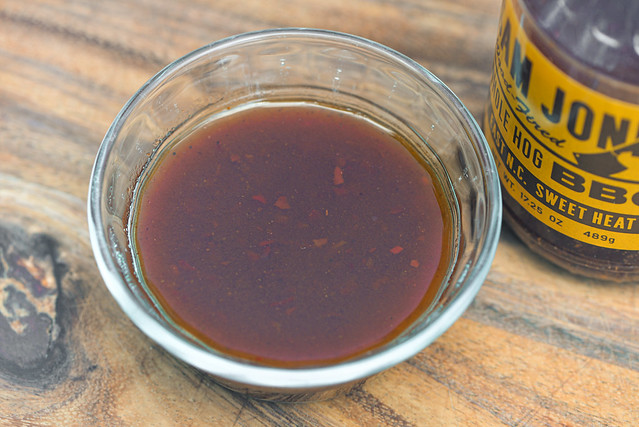 Sam Jones comes from a family that's practically barbecue royalty in North Carolina—his grandfather's spot, Skylight Inn, has come to be known at "The Capitol of Barbecue," and even has a fitting capitol dome on the building. It all started for the Jones family in 1947 when Pete Jones, at the age of 17, began smoking whole hogs at his restaurant in Ayden, NC. Skylight Inn got a boost in notoriety in 1979 when National Geographic dubbed its barbecue as some of the best in the country in the book Back Roads America. It wasn't long after that until Skylight Inn became a destination, getting big names such as President Regan and Vice President Bush to travel there for a taste of their Eastern NC barbecue. Pete passed away in 2006, but Skylight Inn kept churning out whole hogs under the hands of Pete's son Bruce, nephew Jeff, and grandson Sam. In 2015, Sam started taking his own path by opening Sam Jones BBQ in Winterville, NC, which stills continues the whole hog tradition, but also expands on both the meats and sides available.

A nose tingling mixture of tart vinegar and hot pepper are what greet you upon first whiff of this sauce. It certainly delivers on the "heat" portion of its name, but in the aroma, the "sweet" component isn't prevalent. There are undertones of acidic tomato and onion powder to create additional complexity to the otherwise familiar Eastern North Carolina aroma.

This rusty red sauce is very smooth and had a glossy sheen to it. It's semi-opaque and easy to see a plethora of spices coming in a wide variety of sizes and mainly black and red colors. The sauce has a very thin thickness and watery consistency, which has it falling off of a suspended spoon almost all at once. No sauce is really left clinging to the silverware, just a few spice specs here and there.

The very first taste of the sauce is quite neutral, but very quickly a light sweetness comes into play. That flavor is fleeting though as vinegar first balances the sugar, then overtakes it to become the primary trait. As the sauce settles on the tongue and the tartness amplifies, a light tomato taste comes out followed by an earthy pepper that releases a mild heat. Like the vinegar, that spiciness increases as it settles in, becoming pretty spicy by the time the sauce exits the mouth, leaving a tongue tingling mixture of vinegar and pepper as the aftertaste. 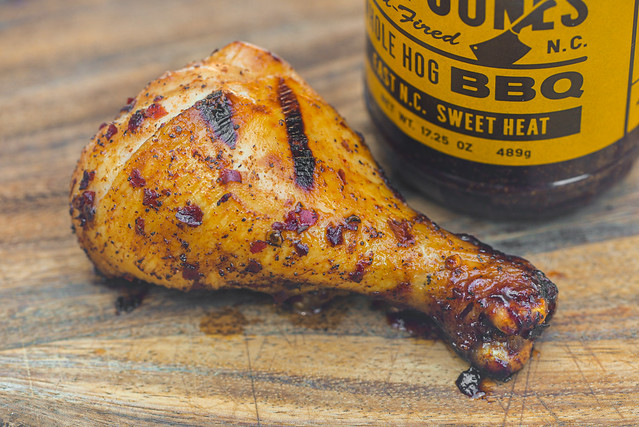 This sauce coated the chicken in a very thin layer that looked like mostly spices at first, but picked up a light orange hue after a few brushings. It baked down well over indirect heat, and then saw minimal caramelization and no sauce loss over direct heat. Despite the light looks of the sauce, there was more flavor than expected. The chicken had a nice tang to it and a pleasant heat that was more subdued than out of the jar thanks to a slight bump in sweetness. The natural flavor of chicken came through quite well, being enhanced by the vinegar, heat, and earthiness of the sauce.

Eastern North Carolina barbecue sauces always present a conundrum for me because they aren't meant to function on the grill like a tomato-based sauce, but I also strive to give each sauce the exact same review treatment, even if I know that sets some up for failure in specific scenarios. So I was expecting for me to write up about how good this sauce was out of the jar, but that it wasn't meant for grilling with, which is why I was a left a bit shocked that the sauce really did well in both instances. I'm not going to say to go out and use this sauce for all your grilling needs, but at least with a light meat, like chicken, it definitely added a really nice flavor after being cooked. Of course, you're going to get the most bang for your buck using this sauce in its raw state, especially on pulled pork, where its tang, spice, and light sweetness serve as exemplary Eastern North Carolina flavors and will give you one of the truest tastes of this sauce tradition you'll find.