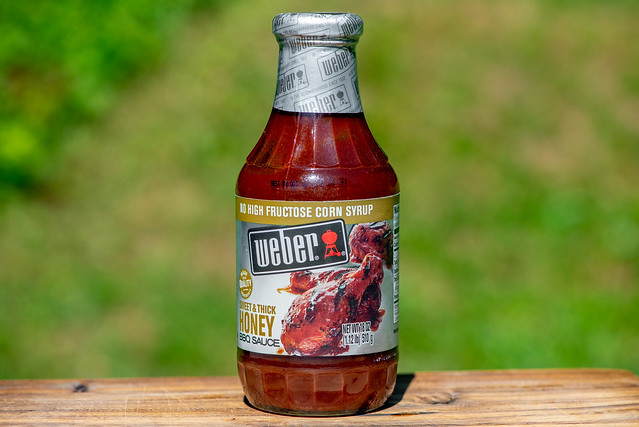 Weber Honey delivers extra sugar against a familiar bold barbecue flavor that maybe becomes a tad too sweet for some tastes after being grilled. 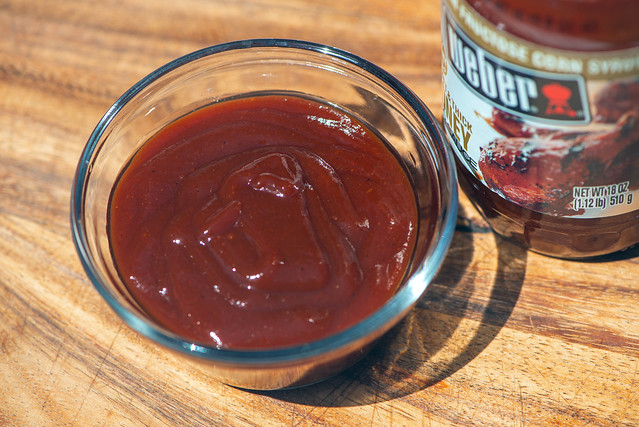 You may not know, but it makes sense when you learn that Weber actually started out as an ironworks company before transitioning into grill manufacturing. The business began in 1893, but it wasn't until almost 60 years later, in 1952, that their first grill was born when buoy maker and employee George Stephen Sr constructed the initial kettle grill. That grill was so popular that George eventually bought out the business and changed its focus to solely grill production. The Weber kettle is still probably their most recognizable product, but they make a while ranges of grills and smokers in both charcoal and gas varieties. Their line-up of food stuffs is actually a sister company called Weber Seasonings, which currently has five sauces along with rubs, seasonings, and marinades.

A familiar "bold" barbecue aroma greets the nose on the first whiff of this sauces with its strong sweet molasses and acidic character. Also mixed in is the common heavy smokiness as well as a little earthy pepper, but anything else at work in this sauce is very behind the scenes, hidden by the acidity, molasses, and smoke.

This maroon sauce has a slight texture to it and a shiny, glossy sheen. It is opaque, bu you can still see some spices that are mainly small white and black specs. The sauce is a few notches above medium on thickness scale with a syrupy consistency. This has it falling in two large drips at first off of a suspended spoon before changing to one or two more smaller, slower drips. Then the sauce ceases releasing and a thick layer of the stuff remains clinging to the spoon.

The first taste of the sauce is all sugar, but the honey character promised on the label quickly works its way in, along with molasses, to give the sweet profile some extra notes. With all the sugars going on, it takes awhile for the vinegar to break through, but it eventually does, and brings with it an acidic tomato flavor and mellow smokiness, cementing the sauce's bold barbecue flavor. As the sauce lingers on the tongue, the tanginess just increases and garlicky, smoky, and peppery notes come in. The sweetness remains prevalent though as the sauce leaves the mouth, which is when the tang and spice turn up a couple levels to leave a tangy, sweet, and spicy aftertaste. 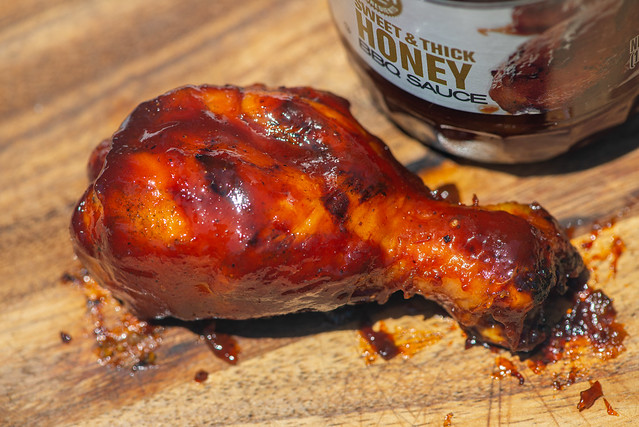 The sauce coated the chicken in a medium, uneven layer that baked down well over indirect heat. There was a little initial sauce loss, but once moved directly over the coals, even more sauce fell from the leg, while what remained saw only minimal caramelization. The final very sticky and thick sauce layer had an overwhelming sweet, honey flavor. That acidic tomato taste from out of the jar turned to a mostly sweet ketchup profile with molasses and smoke playing bit parts to add a little complexity to the party.

This is my third Weber barbecue sauce review, and for the most part, I found them towing a common supermarket barbecue sauce line, albeit a tad better than that standard bearer you'd pull from the shelf. Unfortunately, their Honey recipe was not the strongest of the lot and fell in with crowd of middle of road sauces. It was definitely made for those with a sweet tooth and delivered the bold barbecue flavors that taste comforting out of the jar, but those extra sugars were amped up too much after being grilled, leaving a piece of chicken that didn't deliver on its full barbecue promise. This sauce is not bad though—it tasted of quality ingredients and had a nice progression of flavors—it just won't level-up your grilled and smoked meats in the way other sauces can. Somedays, that's enough though, so if you need a quick burger topper, rib slather, or steak dip, you're not going to go wrong with Weber Honey.