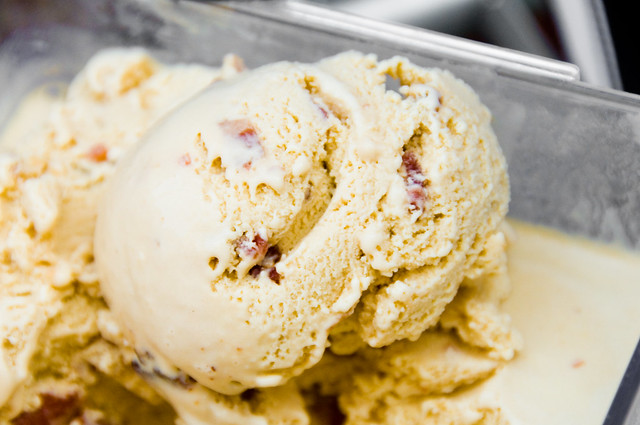 Ice cream has been a long Meatwave tradition. There's a rarely been a time that I haven't churned up some creamy deliciousness to accompany whatever meat was being smoked or grilled. Since the two have gone hand in hand so long, the conservation of mixing them has been inevitable. No combination has been so widely discussed as the joining of bacon to ice cream. All of this lived in our fantasy world, the one where the streets are lined with sausage and it hails meatballs, and I don't think anyone ever expected this creation to see the light of day. But it did, last Sunday, and oh, what glory it held! 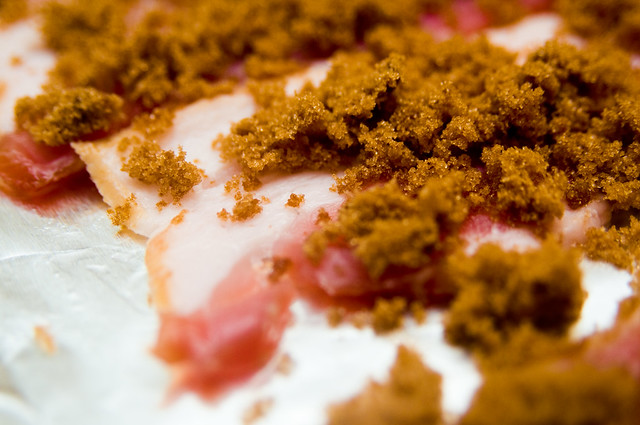 I must admit, I cannot take credit for bringing the bacon ice cream to fruition. I consider myself a cook, being able to understand and make recipes turn out excellent, but I lack the creativity necessary to innovate when it comes to food. So trying the figure out which flavors would best compliment bacon in an ice cream escaped me, and it would probably have for many years more if I hadn't seen David Lebovitz's beautiful recipe for this master creation. 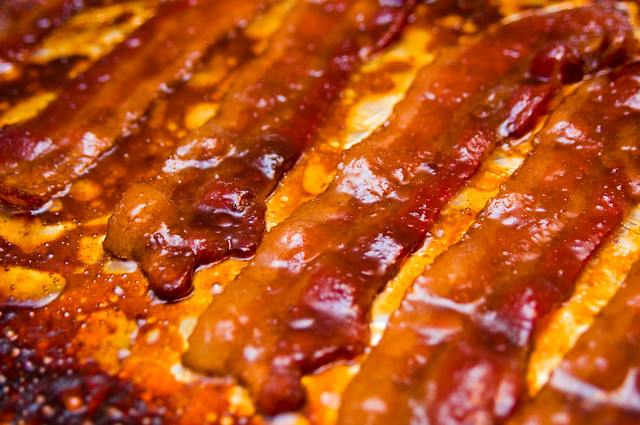 What David Lebovitz did that I would probably never have thought of, was to candy the bacon. He did the leg work of trying different methods of candying, and came to the conclusion that coating the bacon with brown sugar was the perfect way to balance the saltiness with sweetness to make bacon work in an ice cream. So I followed suit and cooked up a batch of sugar coated bacon, which filled the house with the deep aromas of caramelizing sugar and smokey bacon, which confused me as much as it made my mouth water. 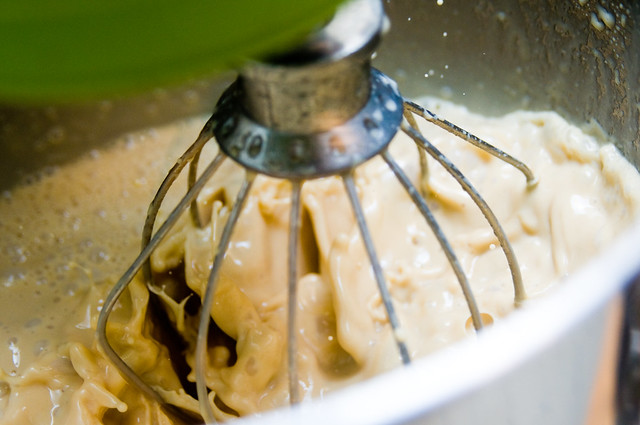 The next innovation of Mr. Lebovitz's ice cream was the use of brown sugar instead of white to form the custard. For my entire ice cream making career I've been using Alton Brown's base recipe and taking it from there. I've become a bit of an expert of making ice cream using this formula, and David Lebovitz's threw me off because it mixed the sugar with the cream, while I'm used to mixing the sugar with egg yolks. Even though I much prefer Alton's method, the custard still came together beautifully in the end. 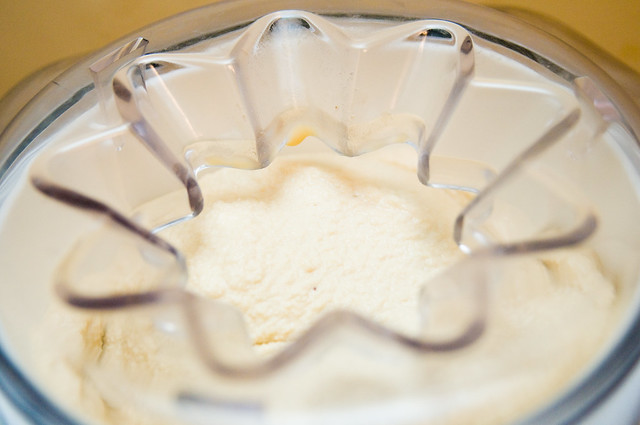 After the custard was together and cooled slightly, I added the other twists that made this ice cream work so perfectly, cinnamon and whiskey. Then the custard went into the fridge to cool, followed by a churn in the ice cream maker. As the custard began to freeze, I started tasting, and it was fabulous, if a tad little too sweet. In the last couple minutes of churning I added the candied bacon and tasted again. The saltiness of the bacon balanced the sweetness perfectly and I knew this was bound to be an instant Meatwave classic. 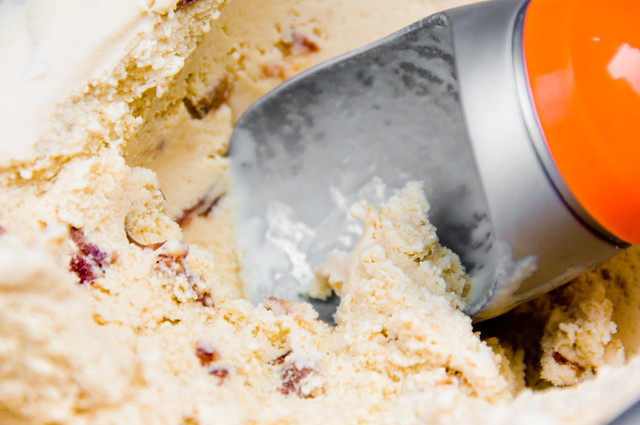 There was a moment of hesitation though. Even though I knew the glory of the bacon ice cream, the utterance of it led to a momentary reluctance from the masses. In that fleeting instant, I greedily hoped it would all be mine, but as soon as the first Meatwaver took a spoonful to her mouth, she was preaching the gospel. Then it was only a matter of minutes until the tub was empty and everyone, even a vegetarian, was scrapping the bottom of their cups in an attempt to not let a single drop of this magnificent creation go to waste. Now that Meatwavers have seen the light and all that it holds, I beg you to join us, so you too can bask in its glory.

Preheat the oven to 400F. Lay the strips of bacon on a baking sheet lined with a silicone mat or aluminum foil, shiny side down. Sprinkle 1½-2 teaspoons of brown sugar evenly over each strip of bacon, depending on length. Bake for 12-16 minutes. Midway during baking, flip the bacon strips over and drag them through the dark, syrupy liquid that's collected on the baking sheet. Continue to bake until as dark as mahogany. Remove from oven and cool the strips on a wire rack. Once crisp and cool, chop into little pieces, about the size of grains of rice.

Melt the butter in a heavy, medium-size saucepan. Stir in the brown sugar and half-and-half.

In a separate bowl, stir together the egg yolks, then gradually add some of the warm brown sugar mixture to them, whisking the yolks constantly as you pour.

Bring a medium saucepan with 1 inch of water to a boil. Reduce hea to medium low and place bowl with custard on top. Cook, stirring constantly and scraping the bottom with a spatula, until the custard thickens enough to coat the spatula. Set the custard aside to cool to room temperature.

Add liquor, vanilla and cinnamon. Refrigerate the mixture. Once thoroughly chilled, freeze in your ice cream maker according to the manufacturer's instructions. Add the bacon bits during the last moment of churning, or stir them in when you remove the ice cream from the machine. Freeze until ice cream hardens.