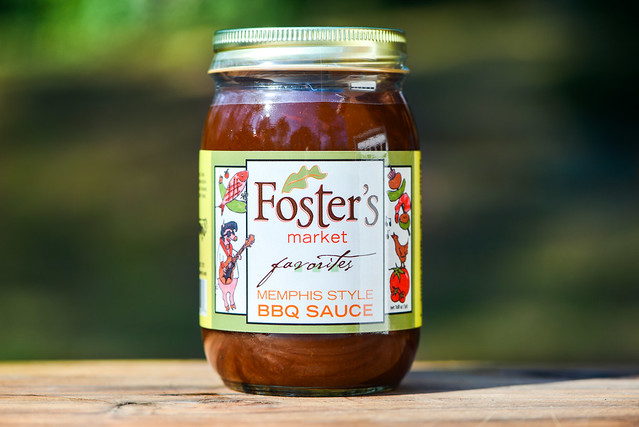 A chunky tomato base brings a unique and fresh stamp to this sauce's otherwise highly tangy character. 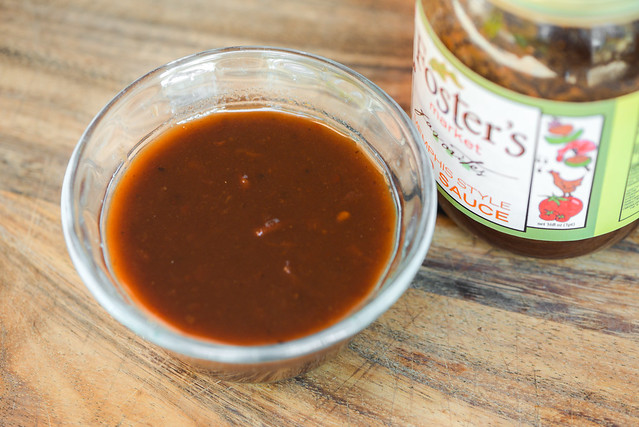 Foster's Market in Durham is a regular lunch spot for me—it's proximity to home and my lack of a vehicle makes it one of the best choices for a good quality meal. While waiting for my order on a recent visit, I noticed Foster's had its own line of barbecue sauces, and picked up a bottle of their Memphis Style to try out at home. This Durham institution was started in 1990 by chef Sara Foster and her husband Peter and was one of the first businesses in the county that featured locally sourced prepared foods and groceries. Prior to setting up shop in North Carolina, Sara worked in New York restaurants as well as in Martha Stewart's catering business after graduating from the New York Restaurant School in 1981. A combination of her cooking background and success with the market has led Sara to also author five cookbooks.

A first whiff of this sauce fills the nose with a fresh and heavily acidic tomato aroma. The extra tanginess is no doubt from vinegar and there's also light Worcestershire and molasses notes that give it a mild barbecue character. More than barbecue though, the strong tomato, along with some hints of pepper and heat, give it more of a salsa-like aroma that's both bright and fruity.

This sauce overall has medium-thin consistancy, but there's a ton of veggie chunks that gives it a lot of texture. It has a rusty orange-hue and is mostly opaque, but it's still easy to see some small spice specs along with a few bigger black pepper pieces as well. When dropped form a suspended spoon, the sauce falls in a very fast, uneven, and chunky pour. After the last few drops release, there's almost no sauce left clinging to the silverware except a few of those tomato pieces and spices.

The initial flavor of this sauce is a highly acidic, fresh and fruity tomato. That tomato base is quickly overtaken by an intense and dominating wave of vinegar that makes the sauce turn to all tang only after a second or two on the tongue. After a few more spoonfuls, the other barbecue components of molasses, Worcestershire, sugar, and mustard begin to add complexity. As the sauce is leaving the tongue, there's a faint earthy pepper whose heat struggles to come out from behind the still overpowering vinegar. 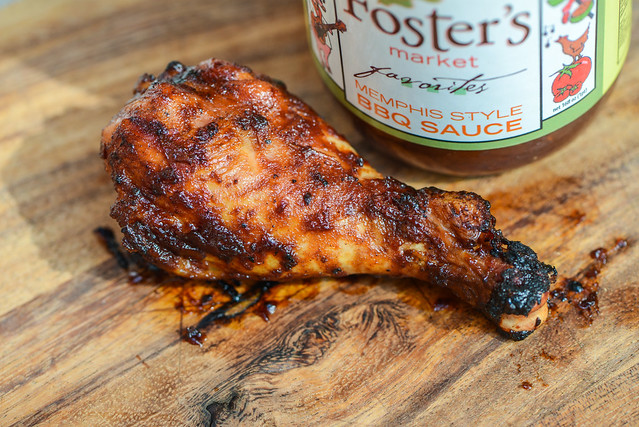 The first few brushings of this sauce seemed to mostly slide off the chicken, but what did stick baked down well and built up an uneven layer of sauce after repeated applications over indirect heat. When moved to direct heat, there was light caramelization and no burn off. That super strong vinegar tartness from out of the jar was severely diminished after being cooked, leaving only a mild tang with a light and fresh tomato character. This let the flavor of the chicken come through more than your average barbecue sauce.

I'm currently still wavering a bit on this sauce. On my initial testing, I felt the Memphis label wasn't apt and I was tasting something more akin to a salsa with too much vinegar than a barbecue sauce. Given some time between my first impression and today though has reshaped my perception. Now, ignoring any loose association to Memphis, this sauce kind of tastes like a Western North Carolina vinegar sauce that uses chunky fresh tomatoes—which is an interesting concept. I'm still not sold on the sauce overall through, feeling the intense vinegar out of the jar hid some of the complexity going on underneath and then the flavor became a bit too mild after being cooked. Still, it gets points for possessing a creativity and freshness that, while may not make for the best barbecue sauce out there, is totally in line from what I've come to know from the food I get at Foster's Market. So if you're a fan of the type of homemade and fresh-style of cooking, this may be a sauce worth checking out to use mainly as a condiment on things like pork, sandwiches, chicken, and the like.