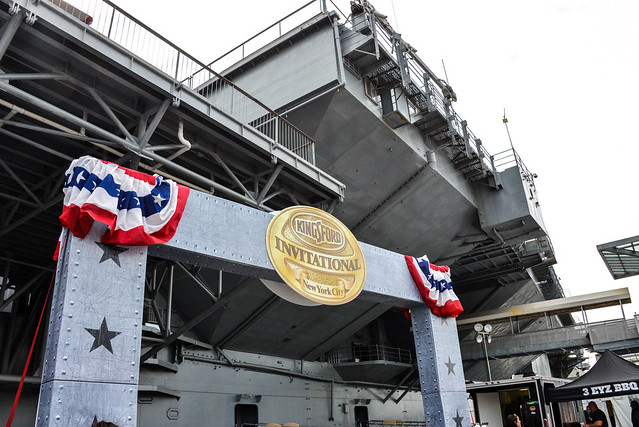 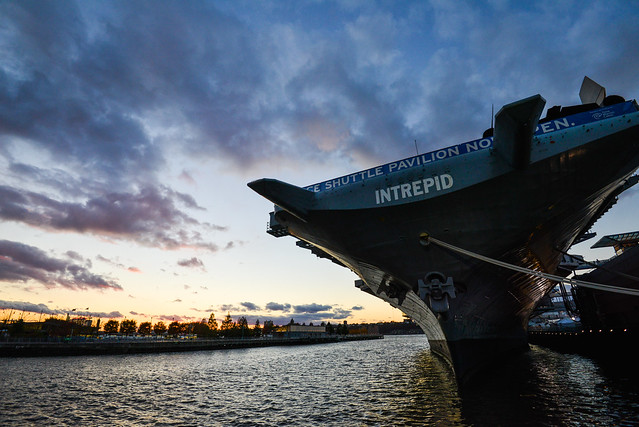 The setting of this year's Invitational couldn't have been more impressive—the Intrepid. As I arrived Friday evening against a beautiful fall sunset, the enormity of the venue was only fitting for the scope of the competition. Well, maybe the eight teams set-up adjacent to the massive aircraft carrier may have been dwarfed in size, but certainly not in prestige. 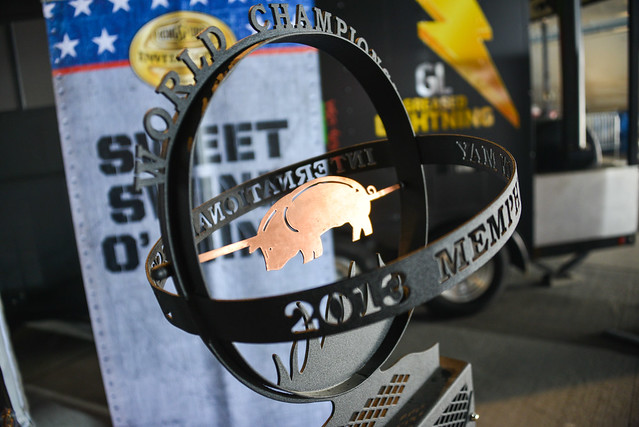 The teams in attendance had all made the long trek to New York, big rigs in tow, to be there this Veteran's Day weekend. Fitting to the holiday, the Invitational was held in partnership with Folds of Honor, a non-profit foundation that provides scholarships and other assistance to families of soldiers killed or disabled in service to our country. The contenders and their qualifiers were: 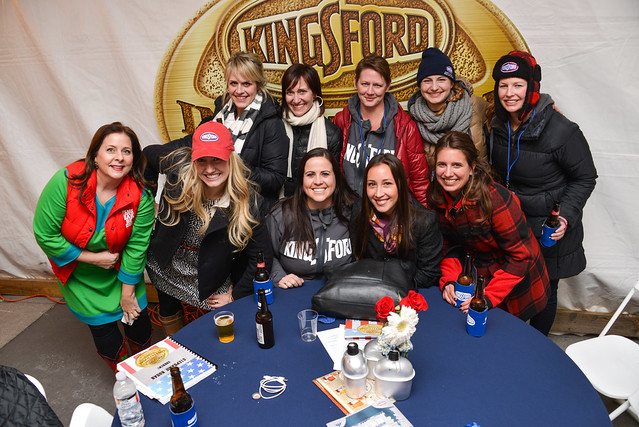 I had arrived just as the winner of the one-bite challenge—a contest where each team submitted a steak dish to be consumed in one-bite—was being announced. As soon as Cool Smoke's NY strip with brown butter bacon sauce and balsamic drizzle was deemed the champion and awarded a $5,000 prize, it was time to party. Each team's one-bite entry was passed as all judges, contestants, film crew, and press gathered in the heated tent and downed one limited-edition Budweiser after another. Above are my gracious Kingsford hosts for the weekend with good friend of the Meatwave, Amy Mills on the end. 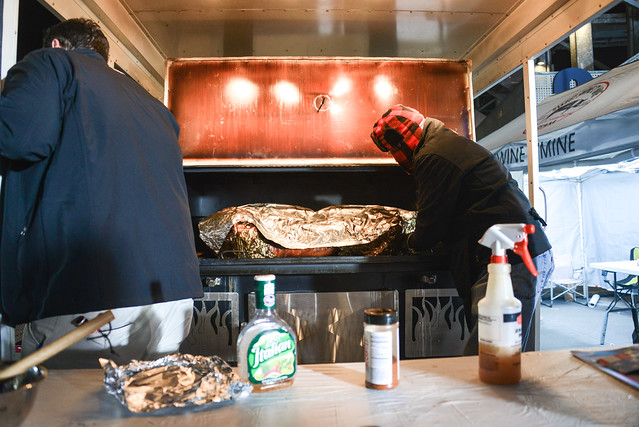 As I stumbled out into the cold just past midnight, I took some time to watch as the teams were starting to stir. Some were just beginning to stoke their fires, while others already had things cooking. This is Sweet Swine o' Mine checking on their whole hog, the only team who did not do shoulder only for the pork category. 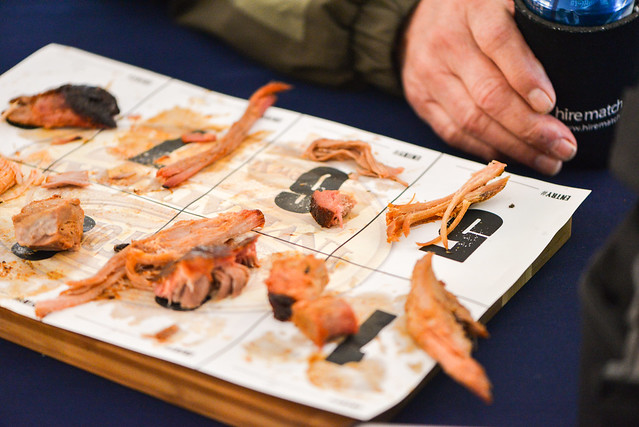 The next day I arrived back a little late. Figuring there wasn't going to be much to do except stand in the cold for the early hours of the competition, I inadvertently missed my chance to taste the chicken and ribs entries. Pork is what was being judge as I walked in, and the leftover boxes has just made their way into the hospitality tent for consumption. 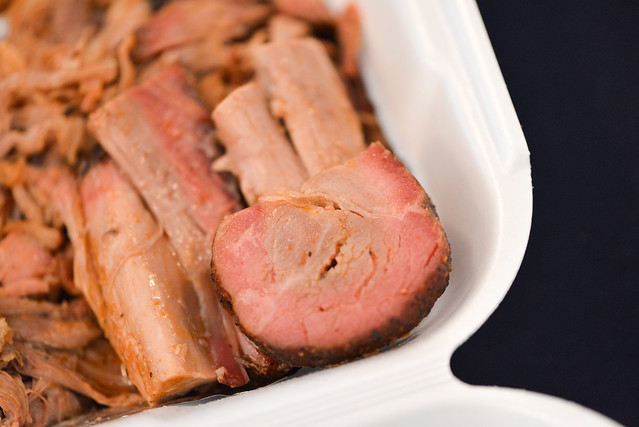 Needing to work on pork myself, I was particularly excited to taste the flavor, texture, and tenderness of champion quality pork. As good as they all were, there was one that clearly stood out among the lot, and that was the whole hog (which isn't the box pictured). It's hard to describe how incredibly juicy those chunks of swine were, all tasting almost of pure pork with just a slight addition of sweetness and spice. It was barbecue perfection and no sooner than I thought I couldn't eat another bite, I found myself compelled by a desire for more of that delicious pork, not matter how full my stomach had become. 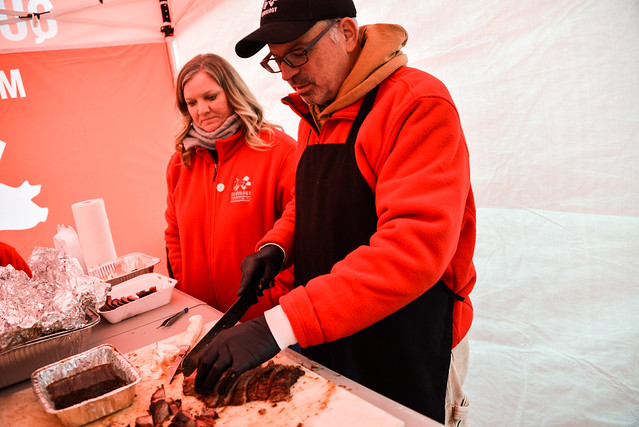 After pork came brisket, and with an hour between turn-ins, the pace of this competition felt much more relaxed compared to when competing under the normal thirty minute window. Each pitmaster was taking their time to cut their flat into precise slices, and their point to perfectly cubed burnt ends. 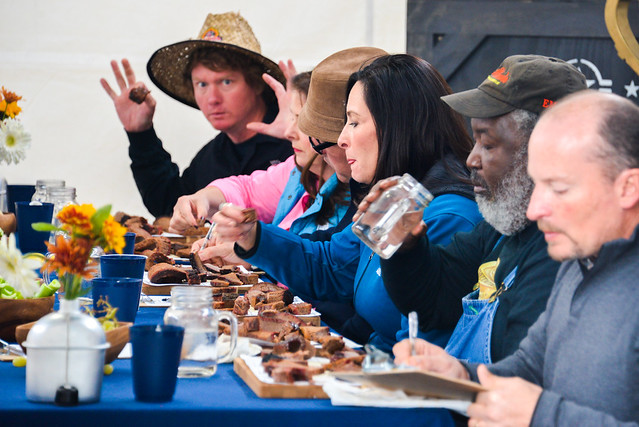 Those pieces of brisket were carefully placed in boxes that then made their way to the judges tent, where a discerning crowd of barbecue experts waited to give them proper consideration. Included in the line-up of judges were Chris Lily from Big Bob Gibson's, Melissa Cookston from Yazoo's Delta Q, Amy Mills from 17th Street BBQ, Brad Orrison from The Shed, Ed Mitchell, and Douglas Rodriguez. 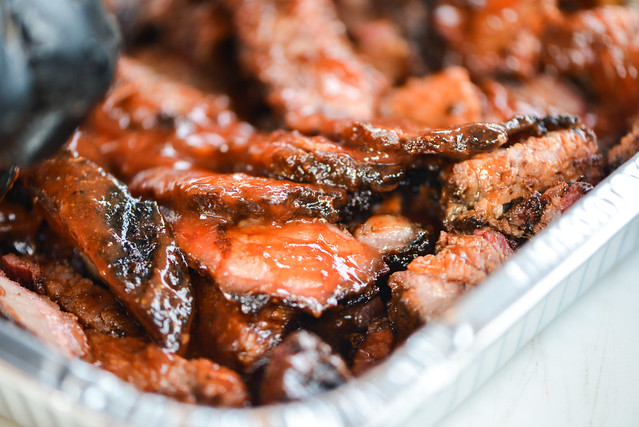 With turn-ins done, that meant it was time to chow down on the leftovers, and with brisket, there's always plenty of leftovers. In contrast to the pork, which all seemed to go for a similar flavor profile, the briskets were all surprisingly different. Some certainly pumped up the beef flavor with beef stock and other seasonings a lot, while others took a more natural route. Some were doused in sauce, while others were finished with a simple jus. Some were spicy, while other veered slightly sweet. It was great tasting them all, but with so much variety, I couldn't quite put a finger one that I'd clearly rate a winner. 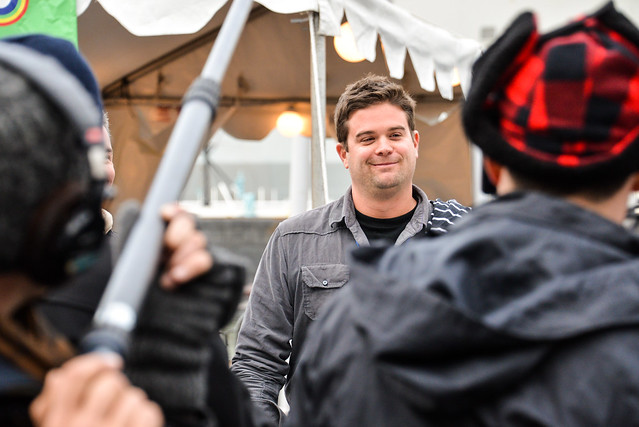 After I was sufficiently stuffed with brisket, there came a long and cold wait until the award ceremony. During this time, the teams all got their interviews in for TV. It was fun watching the process of making the show, although my nervousness in front of a camera made me glad I was on the other side. 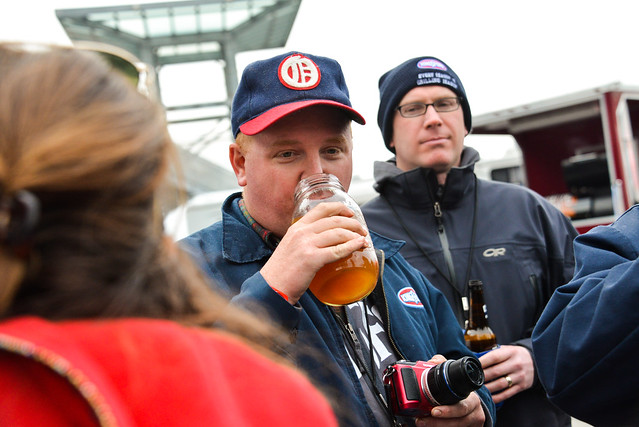 This was also the time when the moonshine came out. At my last Kingsford event in Decatur Alabama, I attribute a little too much apple pie moonshine to the reason I slept through multiple alarms and phone calls the next day. So I took it easy this time around on the stuff, but couldn't resist at least a sip when the bottle reached me. 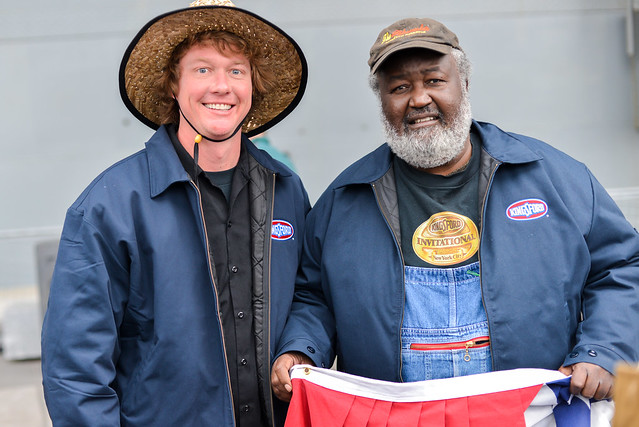 We also got some downtime with the judges and it was an experience getting to know Orrison family, Brad and Daddy-O, to say the least. I also caught up with Ed Mitchell, who was interested on how his Queen's based protege—Arrogant Swine—was making out with his whole hog cooking. 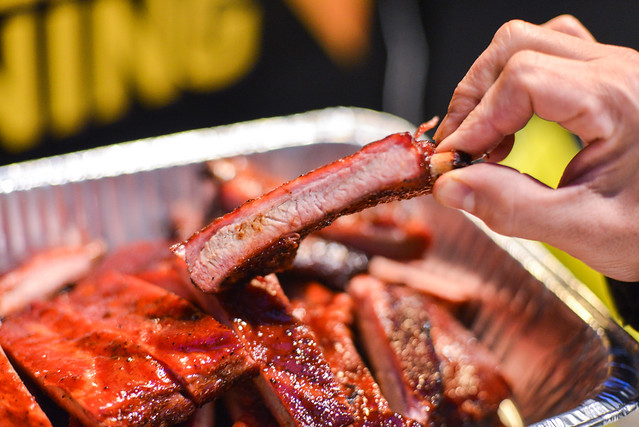 As night fell, I was ever so grateful for Rod Gray from Pellet Envy, who still had four racks of ribs going in the smoker and shared them as the cold was starting to be felt with more force. Those ribs may have have been food to warm the soul, but it was Rod's kindness and generosity that warmed my heart as he spent time talking to me and ended up giving me two bottles of his sauce for testing, along with a homemade bottle of Blue's Hog—now that's special. 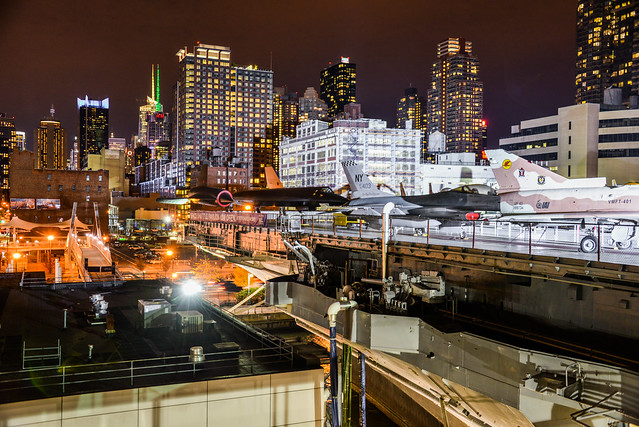 Finally awards time came, and we ascended to the deck of the Intrepid. The crystal clear night and view from the aircraft carrier was something to take in, keeping me busy for a bit running around and grabbing some photos. 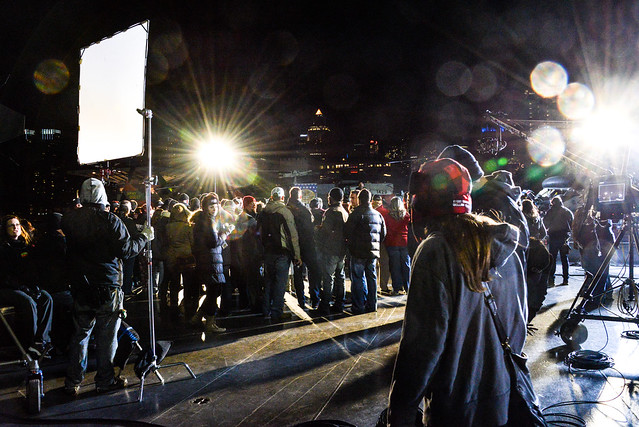 But then time clicked on, and with each minute, things just kept getting colder and colder. As the teams gathered and the film crew got everything in place, a wind picked up and slapped us all in the face. Warmth was found in the herd, and some more beer. 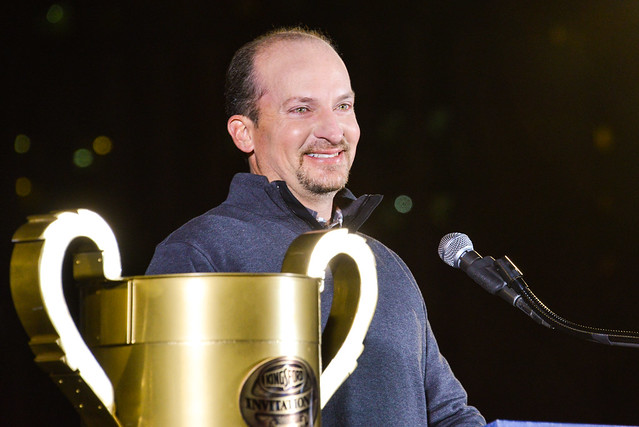 Finally Chris Lilly took to the stage to announce the winner. The wind that was sucking the remaining heat from my body also caused a constant need for retakes as it filled the microphone with its intense whistle. I would have been annoyed, but excitement was starting to overtake all other senses. 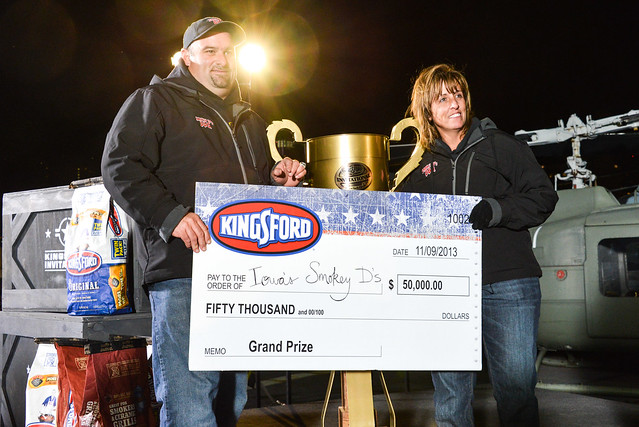 The winner of each category was called to the stage—3 Eyz BBQ for chicken, Cool Smoke for Ribs, Sweet Swine O' Mine for pork, and Iowa's Smokey D's BBQ for brisket. Once they were all assembled around Chris, Iowa's Smokey D's BBQ was announced as the grand champion. Emotion overtook Darren and Sherry Warth, as well as myself. Although my victories have been minor and personal in nature, I know the feeling of hard work and dedication paying off, and could only imagine how good it must have felt to them to take home the trophy at such a momentous competition. As I took the long walk from the Hudson's edge to Broadway to catch my train home, I kept imagining where barbecue may take me. I don't think I'll ever be competing against the best of the best on an aircraft carrier anytime in my life, but then again, did Smokey D's ever think they would?