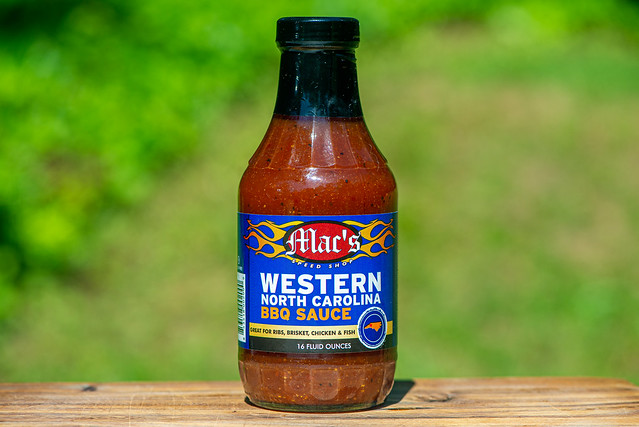 This sauce delivers the right heat and tang for it to taste uniquely North Carolinian, but with just enough tomato and sugar for an Eastern to cry fowl, making it a pretty exemplary Western specimen. 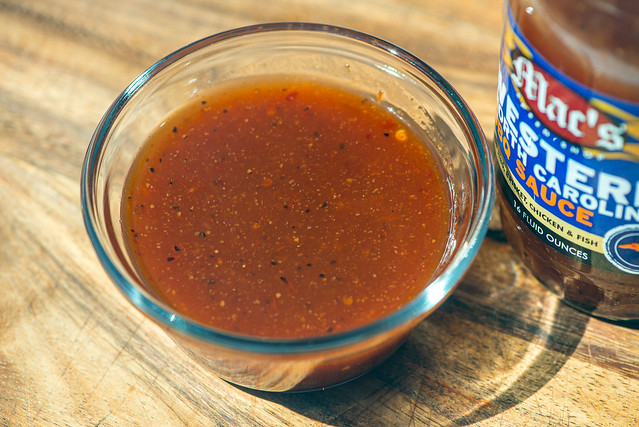 Mac's Speed Shop was born in 2003 when six buddies— Andy Cox, Hal Kempson, Hall Johnston, David Jewell, J. D. Duncan, and Wynn Davis—were having beers and trying to figure out the right business to start together. They merged their interests of beer and motorcycles to form the foundational concept of Mac's and then chose barbecue to be the appropriate cuisine to pair with it. They opened up their first spot on South Blvd in Charolette, NC in 2005 and found an initial success that has led them to open up a new Mac's location every two to three years since then. Mac's currently has eight restaurants throughout North Carolina and has Kevin Kuruc as their pitmaster, who not only has manned the flames for Mac's brick and mortar spots, but also led them to numerous awards in barbecue competitions. On top of the restaurants, Mac's also produces four unique sauces.

An equal mixture of sweet and tangy starts off the aroma of this sauce. Sitting right behind that balanced pairing is a strong spice layer that has a distinct earthy and spicy pepper along with hints of garlic and onion as well. The base of the sauce is very tomato forward with its sweet ketchup aroma, and adding to the barbecue complexity already going on, there's an unmistakable smell of Worcestershire mixing in.

This rusty orange sauce is is very smooth and has glossy sheen to it. It's semi-opaque, which makes it easy to see a plethora of spices that come in all the common sizes and colors. The consistancy of the sauce is medium-thin and syrupy, and that has it falling from a suspended spoon in a fast and even pour that changes to quick drips at then ceases, leaving only a very thin coating of sauce left clinging to the silverware.

For all the upfront complexity in the aroma, the initial taste was surprisingly mostly just sweet. It didn't take long though for the vinegar to come in and balance out the sweetness, then overtake it to turn the sauce primarily tangy. As the sauce settled on the tongue, a combo of Worcestershire and molasses built up a familiar barbecue profile, followed by all the spices with garlic, onion, and pepper all playing strong roles. As the sauce left the mouth, that pepper layer took prominence and imparted a medium burn, leaving the tongue tingling with a spicy vinegar flavor. 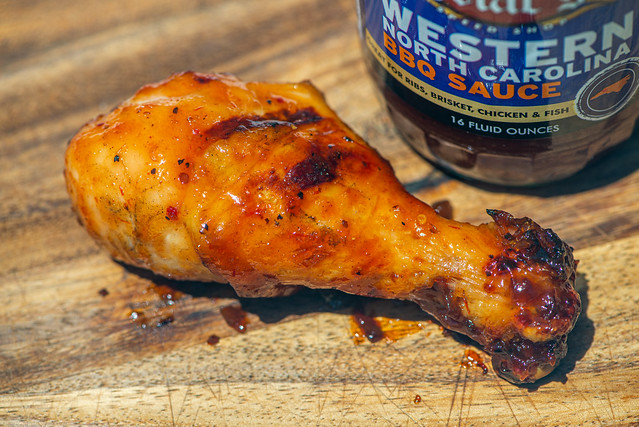 The sauce coated the chicken in a thin, even layer that baked down well and took a few brushings to give the meat a nice orange hue. When moved directly over the coals, there was minimal caramelization with no sauce loss at all. The flavor on the whole didn't hold up as well as out the jar. The nice heat originally there was mostly lost in favor of a sweet and tangy ketchup-like taste. With subsequent bites, the spices made themselves known, but still to a lesser degree than before it was cooked.

I've always seen these Mac's sauces in groceries around North Carolina, but never knew the origin or history prior to doing this review. So now I'm interested in trying out this joint, which seems to cast a broad barbecue net to encompass most of the NC styles and beyond. This leaves Mac's boasting multiple sauces, and they do this Western NC version quite well. It hits the right tang with just enough ketchup and sweetness for an Eastern North Carolinian to cry fowl, but still delivers the acidity and heat to brand it a uniquely NC creation. Like most vinegar-based sauces, this isn't engineered for being used on the grill, so it wasn't much of a surprise when it lost its flavor and balance after being cooked, although I always hope for great results in multiple scenarios. That leaves me recommending this sauce as a dip or finishing slather, and a pile of freshly pulled smoked pork is always going to be the proper home, although I can see myself dipping chicken, tots, steak, and whole lot more into Mac's Western North Carolina BBQ Sauce and it all tasting delicious.