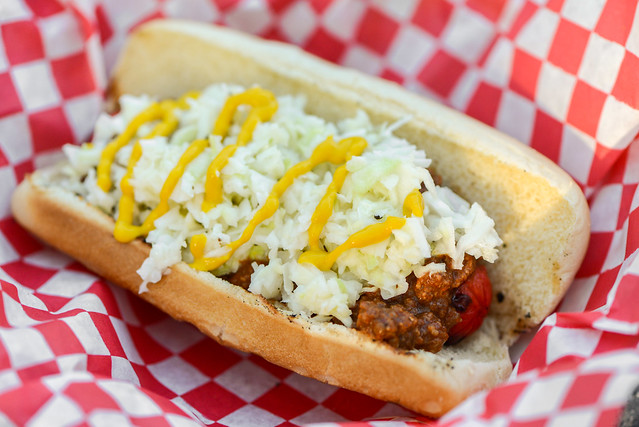 Well, we hit a milestone here at the Meatwave without me even noticing—my last recipe post clocked in at number 365, which means you can now cook a different dish from this blog every day of the year. Thinking about this achievement had me reminiscing about the early days of my grilling efforts, where hot dogs and frozen burger were served embedded with the faint flavor of lighter fluid as I put my foot forward on a path I would have never guessed would take me to where I am today. So I thought it fitting for recipe 366—which let's you now cook a unique recipe each day in a leap year—to harken back to those simpler days, but mix in some present day know-how with a stamp of where I currently am in life, which combined to equate to these Carolina slaw dogs. 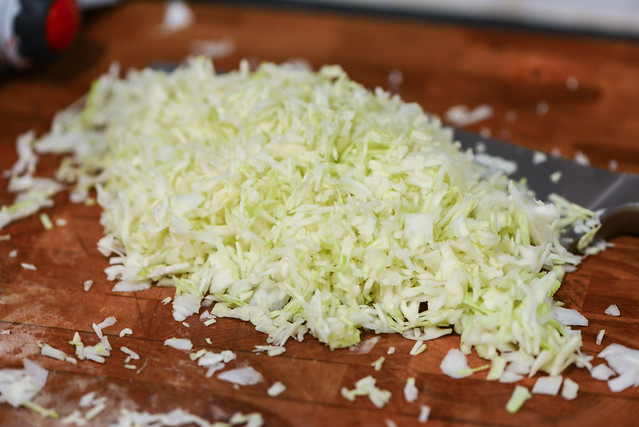 Starting with some of the present, my new reality is a continued adjustment to life in North Carolina. Among the challenges is trying to say believably that we have good hot dogs down here—after sustaining myself on natural casing Nathan's for 18 years, I know this is pretty much a bold faced lie. While learning to love hot dogs here is an ongoing effort, coleslaw is a whole other story. 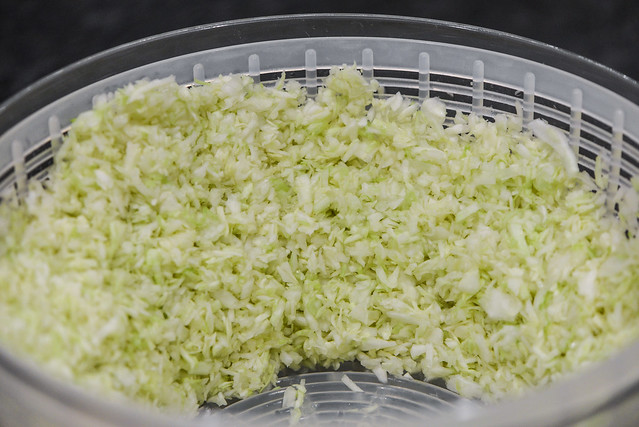 Growing up, I thought coleslaw was just an effort to rid the world of inedible cabbage by doling out this tough, mayo drenched stuff one small cup at at time at diners around the country. I've since learned coleslaw can be an amazing thing, but in New York, the odds were still in favor of getting the bad stuff over the good. In North Carolina though, they know coleslaw, and I actively order it as a side in many scenarios. That's because here it almost always has the right, pleasing crisp-tender consistancy and is dressed with a perfect amount of tangy and slightly creamy dressing. 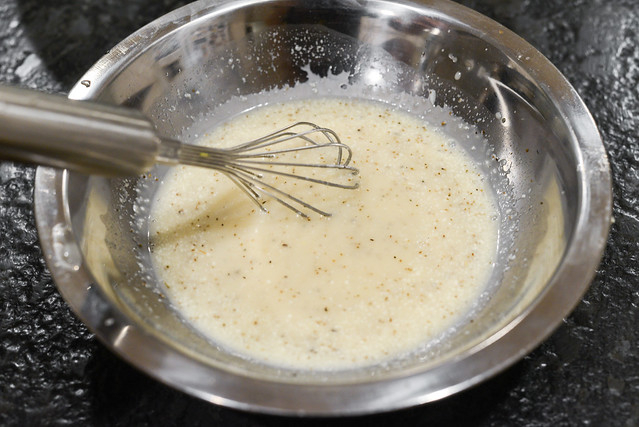 To make something worthy to be called North Carolina slaw at home, I first sliced my green cabbage super thin on a mandoline and then chopped those long stands to be superfine. I then mixed the cabbage with salt and sugar, which exuded moisture and added flavor, leaving the cabbage perfectly crisp-tender and well seasoned after being rinsed and dried. Then for the dressing, I leaned heavily on vinegar mixed with sugar and added just a little mayo, which combined to be the right flavor and consistancy. 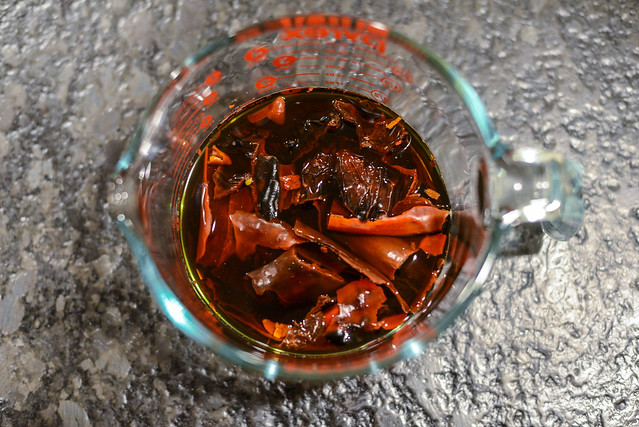 Slaw was only a third of the equation though to create a standard Carolina slaw dog, which also features chili prominently. Hot dog chili has its own unique consistancy, with ground beef being broken down very finely, suspended in a sauce that's more earthy than spicy. I found my path to perfect hot dog chili via J. Kenji López-Alt's recipe on Serious Eats, which doesn't compromise on flavor at all and started with using dried chilis instead of chili powder. 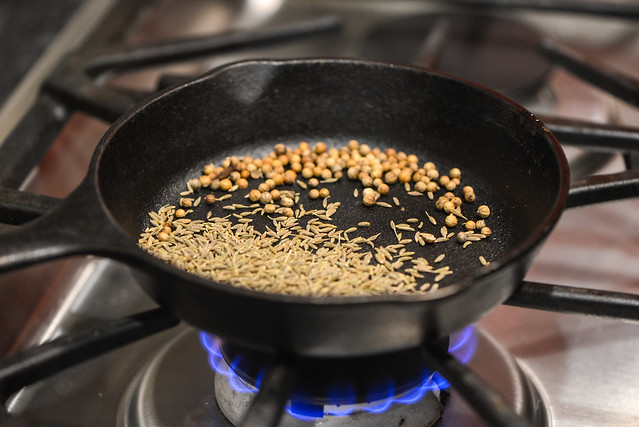 It also realized full flavor potential by using whole spices that are first toasted, then ground, which maximized the flavor outputted by them. The real magic of this recipe though is getting that meat texture right. Anyone who's made ground beef chili before knows that browning the beef first results in firmer, larger pieces of meat than the average variety topped on hot dogs. To get the meat into the right consistancy, it's added in after the liquid and whisked until completely broken down. 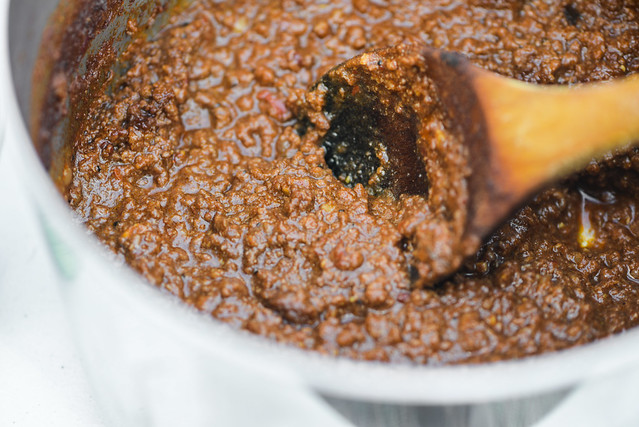 I hadn't used this method previously, and it worked brilliantly. I've been trying to achieve something similar for a hard shell taco filling before and failed, so was giddy that I finally had an answer for that application as well. After simmering the meat and sauce for about an hour, I had what tasted like a pretty killer chili on my hands. The only issue was not browning the meat made it lack a more intense beefy flavor, but a splash of fish sauce at the end fixed that up by imparting an extra savory stamp. 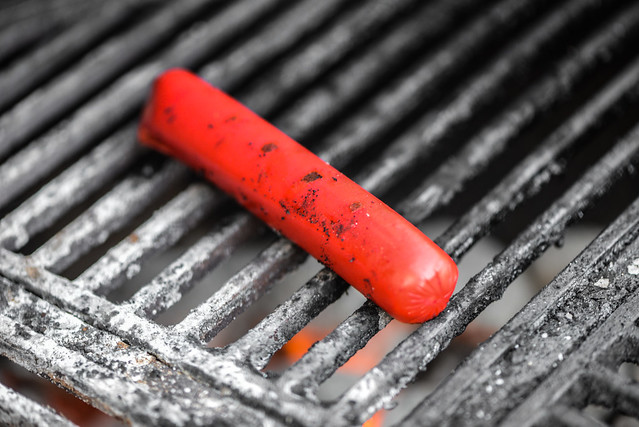 So we're two-thirds the way through this Carolina slaw dog and everything is going all fine and dandy, but then we come to the crux of the matter at hand—Carolina hot dogs. In my area, that means the Brigh Leaf brand, which is a combo of pork and beef and is most commonly enjoyed in their bright red version. From my perspective on what a hot dogs should be, there's a lot of issues I take with a Bright Leaf dog, but given these are pretty much the only choice at a number of venues around town, I'm learning to (grudgingly) adapt. When I picked up a package of Bright Leafs at the supermarket for this effort, I both felt a betrayal to what I know and love (well, not so much because I couldn't help but buy a package of natural casing Nathan's at the same time), and an acceptance of my new home. I have to admit though that on the grill, these tasted much better than the version I'm used to from the ballpark, which first introduced me to them and formed my initial sour viewpoint. 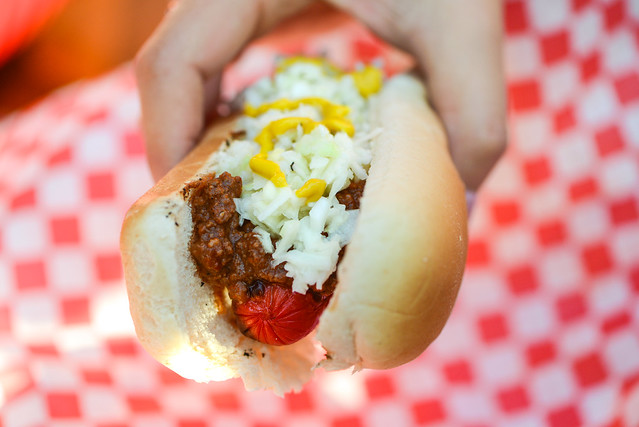 And I'll also admit that when assemble altogether with chili, slaw, and mustard, this did taste pretty right. The lighter flavor of the Bright Leaf dog drew more attention to the slaw and chili, giving all three main players equal roles that complemented each other. It's honestly not something I would have ordered back in New York, but after being in North Carolina for a couple years now, this is starting to taste more like home, making it worthy of being the recipe that will forever represent the ability the cook a year's worth—leap or not—items from this blog alone.

A combo of a Brightleaf hot dog, chili, slaw, and mustard come to together to form a representative taste of North Carolina.