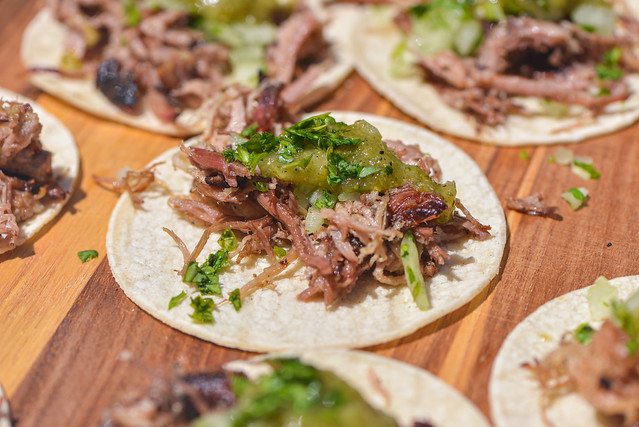 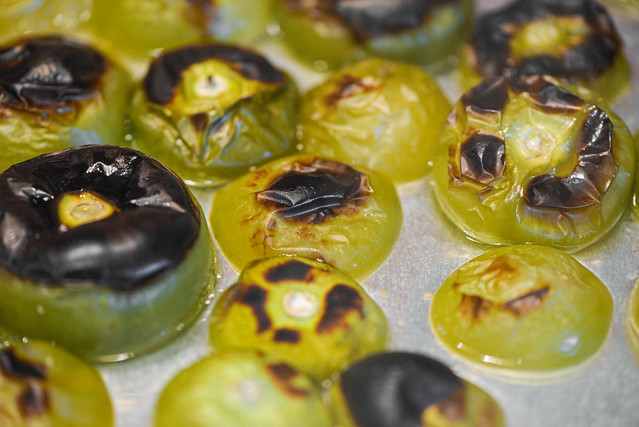 It made sense that, if I was going with a Mexican-influenced seasoning, I should serve the pork in taco form in lieu of of the usual buns. In going with tacos, I needed a salsa for a topper and turned to my favorite salsa verde recipe of all time. I discovered this Ricky Bayless recipe for tomatillo salsa in my early days of learning to cook, and was so blown away with it that it's one of the few things I make consistently again and again. At the time of first cooking it, this salsa variation was new to me and now know it's fairly standard, but that doesn't make it any less delicious. 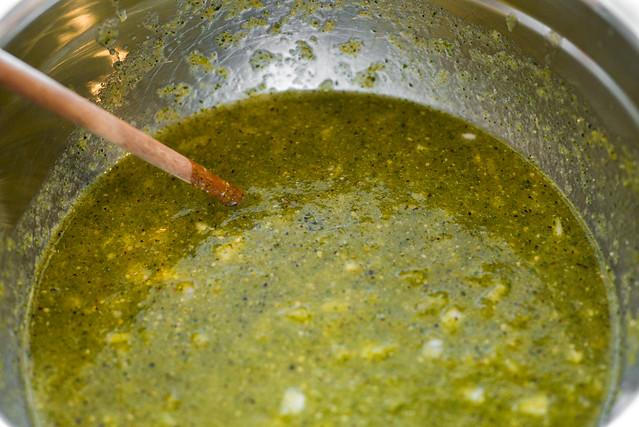 After roasting halved tomatillos under the broiler until soft and charred, I transferred them to the jar of a blender and added in cilantro, water, garlic, and jalapeño and pureed until smooth. I then poured the salsa into a bowl and stirred in finely diced white onion and seasoned with salt, sugar, and lime juice to taste. The salsa was as good as it always is—complex with its tart, spicy, fresh, and roasted flavors. 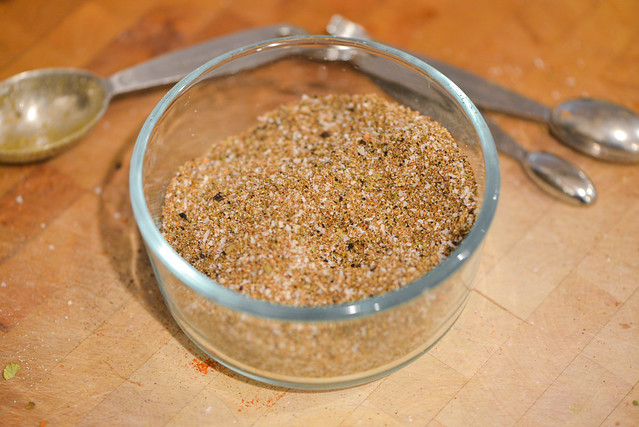 When constructing a carnitas-inspired smoked pork, I took the flavors I often associate with the dish and moved them into areas of my normal barbecue process. This started with the development of the rub, where I got in the familiar cinnamon, onion, and garlic components, but then added in chili, sugar, cumin, and oregano as well to create a more layered rub that brought a few aspects of standard barbecue to the party. 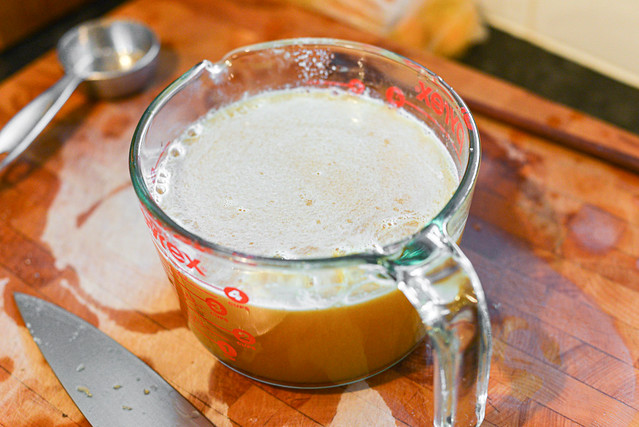 Orange is a pretty crucial element to carnitas, and I got that in via the injection. Freshly squeezed orange juice served as the primary ingredient here, but I also used some cider vinegar, salt, and dark brown sugar to give the injection more depth. 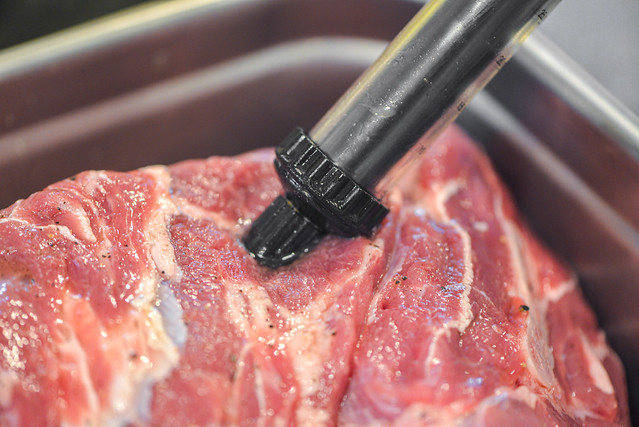 That measuring cup filled with four cups of injection was for two very large pork butts, where I was able to get two cups of liquid into each. In smaller butts, you may only need one to one and half cups of injection to the job done, but I always like to make more than I need and have extra instead running out before I'm done, so I kept the final recipe set at two cups of liquid per butt. 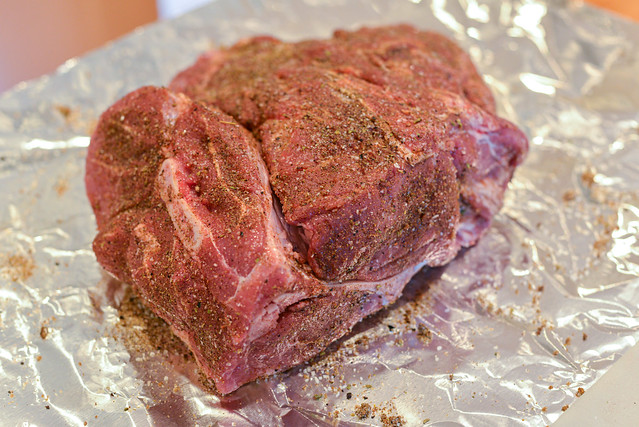 After injecting, I patted the butts dry with a paper towel and then seasoned them liberally with the rub. Now they were ready for the smoker, which I already had running at 225°F with a few chunks of pecan wood tossed onto the coals. 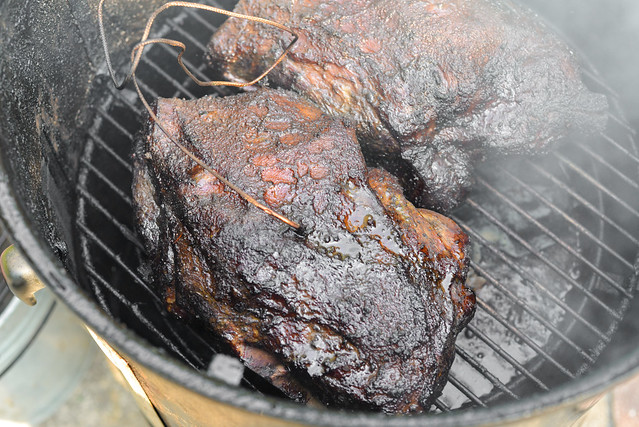 These butts went into the smoker at 10:00pm. I used my trusty BBQ Guru to keep the temperature in the smoker consistent and also monitor the internal temperature of the meat. With the piece of mind this device gives me, I was then able to safely get some shut eye to be well rested for the long day that awaited me. 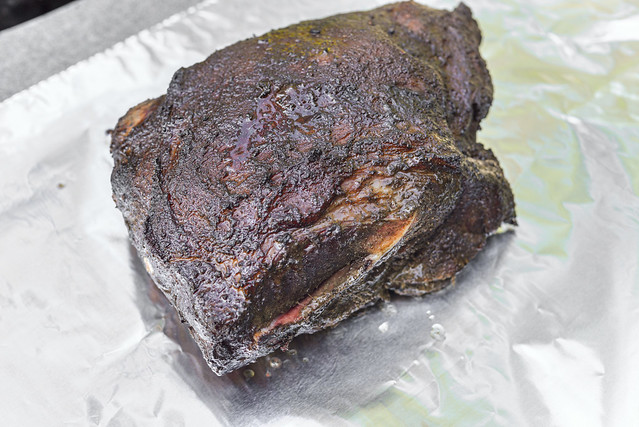 When I got up around 6:00am, both butts were still stuck in the stall state, where the temperature hits around 160°F and stays there for hours on end. It's during this long time that a great bark is formed, so I like keeping my pork uncovered while this is happening. At around 8:00am, the temperature began rising again, and with a dark bark already formed, I decided to wrap the butts in foil, which sped up the final leg of cooking—in about three hours each pork butt hit its final target temperature of 203°F. 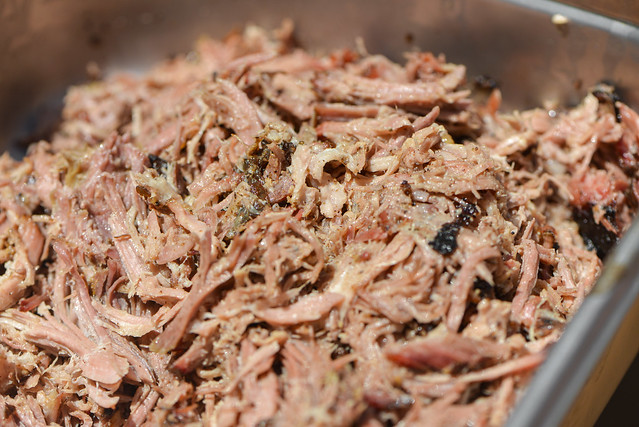 At this point, I removed the pork from the smoker, transferred the butts to the Cambro, and let them rest for a couple hours—knowing most folks don't own Cambros, this is where you put your trusty cooler to work. After the rest, I shredded the butts into pulled pork. The meat was as juicy as could be with a nice smokiness and flavor that definitely had a bit of those orange and cinnamon elements of true carnitas. The only problem I had was, those crispy pieces of pork that are created by frying carnitas were missing, but I had a plan for that. 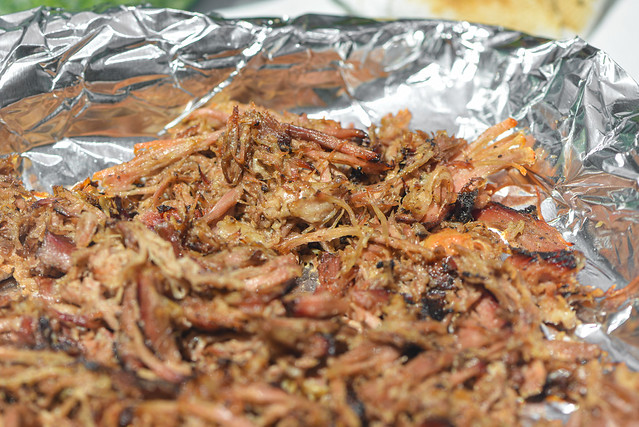 I spread out a layer of pulled pork on a baking sheet—I didn't use all the pork here, maybe about a third of what I had pulled. I then stuck the baking sheet under the broiler until the meat darkened and crisped, which took about six minutes. I then removed the tray and began assemble the tacos with warmed tortillas topped with the regular pork, some of the crispy pork, the salsa verde, onion, and cilantro. 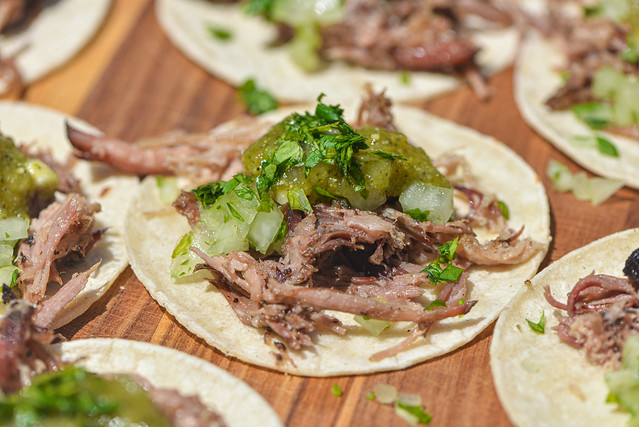 Now that doesn't look like your everyday cookout pulled pork, does it? Yet it was about the same amount of work and probably served more people because less pork was eaten in taco form than the usual sandwich delivery method. Now we can debate whether barbecue or carnitas is the tastier way to cook pork shoulder, but I don't think anyone would deny each is incredibly delicious. I definitely relished in the change this year, with a pork that had a different flavor profile along with the added crispy bits that's not usually part of the equation. While not traditional carnitas, this pork definitely tasted at home in a tortilla with all the toppings, making for one mighty fine taco. Beyond feeding a lot of folks, I also choose pork butts because I often have leftovers, which freeze and reheat really well, letting me get even more recipes out of one cook. I have some big plans for some of this leftover smoked carnitas, so get ready for taquitos, tamales, and more in our future!

The traditional barbecue pork shoulder gets some Mexican influence in this recipe for smoked carnitas.