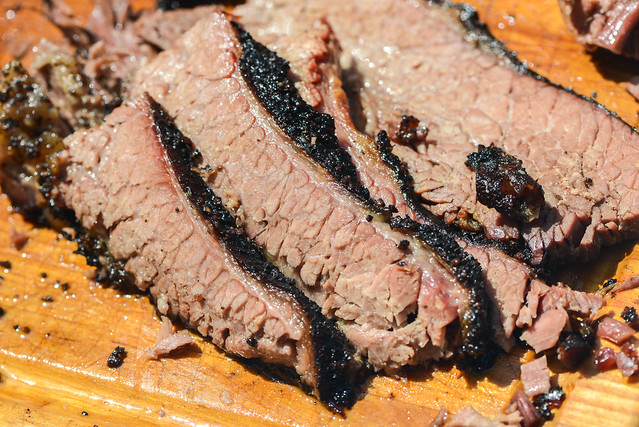 I really love Texas barbecue. I know I moved to NC and should be partial to hog, but seriously, how can you beat luscious, molten beef fat that's so good that nothing more than salt and pepper is needed. As much as I love Texas barbecue, it's remained my most unattainable item to cook at home. Sure, I've had successes to varying degrees over time, but I have never really matched that trifecta of perfectly juicy, smoky, and tender beef in my backyard, and just kind of resigned myself to that fact that my home smoking setup wasn't conducive to producing true facsimiles of Texas style barbecue. That was until I smoked this particular brisket, which has changed my outlook on what I can output in my backyard and my view of myself as a pitmaster. 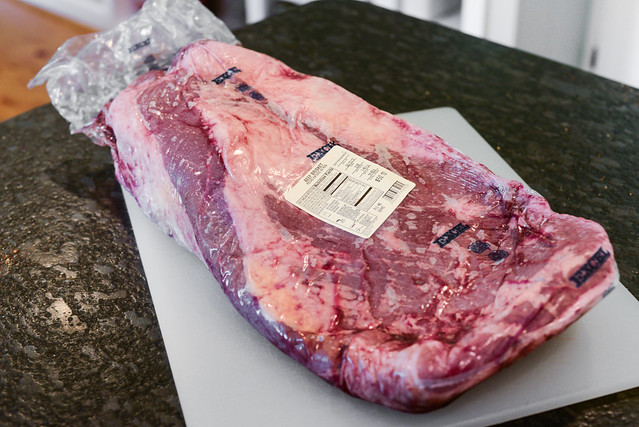 Brisket has fallen off as a medium for me mainly because it's not easy to find packer briskets in North Carolina. Packers are briskets that have both the flat and point sections, with a large piece of fat connecting the two together. I still wasn't quite sure of where in my neighborhood I could just pick up a packer brisket without a special order, but I read sometimes Wal Mart actually carries them, and low and behold, a quick check there a couple days before my Meatwave and was one sitting in wait for me to purchase and turn into barbecue greatness. 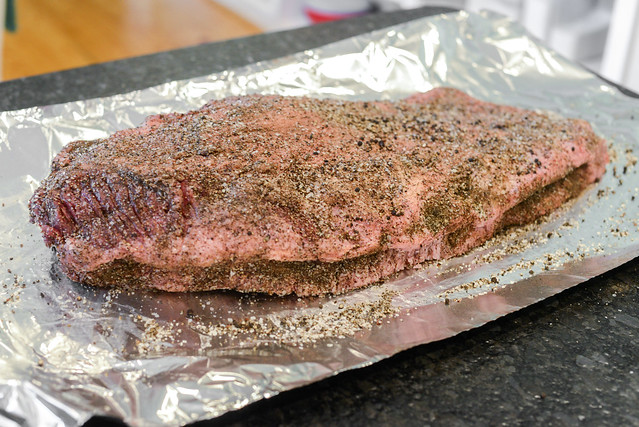 To prep my brisket, I started by trimming down a bit of the fat cap so it was even, then cutting away a bit of the fat deckle between the flat and point, because even as much as I love beef fat, it's just too much in there. Then I applied a the rub, which was nothing more than salt and pepper. I personally am a big fan of extra peppery crusts, a la Louie Mueller, so went in heavy on the pepper, but feel free to adjust the balance to your taste. 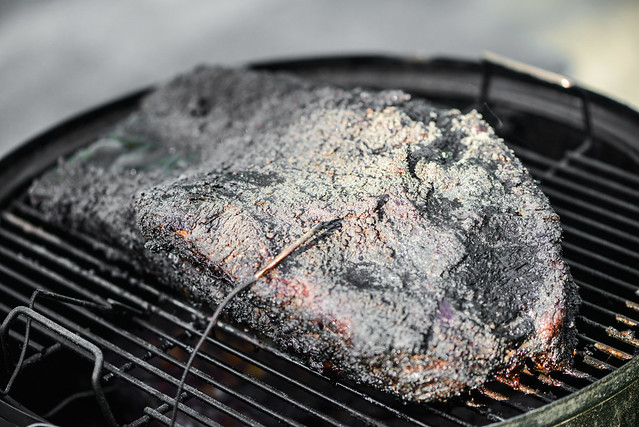 One of the trickiest parts of a perfect brisket is achieving the best balance between crusty bark and juicy meat. I've seemed to do ok in the past getting one or the other, but neither both in ideal harmony. With some extra smoking know-how under my belt this time around though, I knew to get a great crusty exterior, I needed to smoke the beef unwrapped for a good long time, so I let it cook at first until the meat was just north of 180°F. For smoking pros, you know this is through the stall—the point at around 150-160°F where the temperature rises incredible slowly—so this had the initial smoke clocking in at around 11-12 hours. 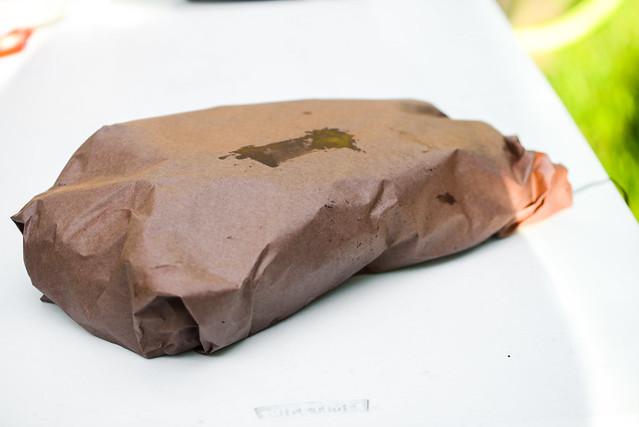 At that point, I had a deep, black bark that I felt comfortable would hold up to being wrapped. Once wrapped, the cooking environment goes from dry to incredibly humid, which is great for the meat, but can impede the ability to get a crusty bark. I used butcher paper to wrap my brisket mainly because it's a common practice in Texas, but I haven't done any side-by-side comparison to see if it's actually more beneficial in anyway to foil. 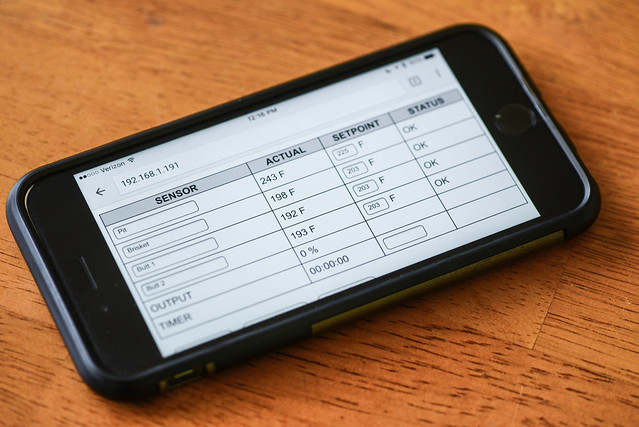 Once wrapped and placed back in the smoker, the brisket cooked at a much faster pace. I was shooting for a final internal temperature of 203°F, which I kept a close eye on using my BBQ Guru CyberQ, monitoring from my phone as I prepped other items for the day's cookout. 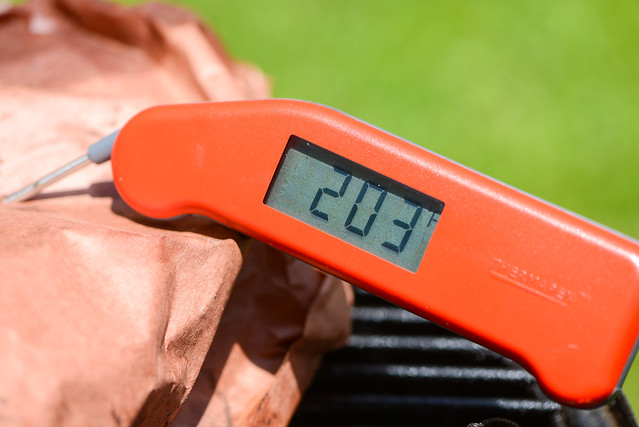 Once I saw it hit the mark, I did a little double check with my trusted Thermapen and confirmed the huge slab of beef was ready to pull off the pit. As I picked it up, I could feel that this brisket had the tell tale jiggle that well cooked specimens usually have. 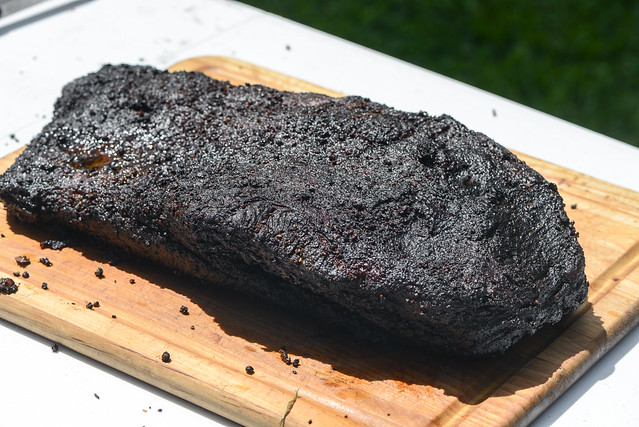 I let brisket sit in the Cambro for about two hours prior to serving. My gained experience has also taught me the importance of holding big slabs of slow cooked meat—my beef ribs, pork butts, and pork bellies have all come out even more tender and juicy after a rest of at least 30 to 60 minutes, although they can hold fine for hours beyond that too.

Once I transferred the brisket to the cutting board and unwrapped, I was greeted by a still jiggly meat that had a beautiful, dark bark that had gone from completely dry looking when I first wrapped it, to glistening. 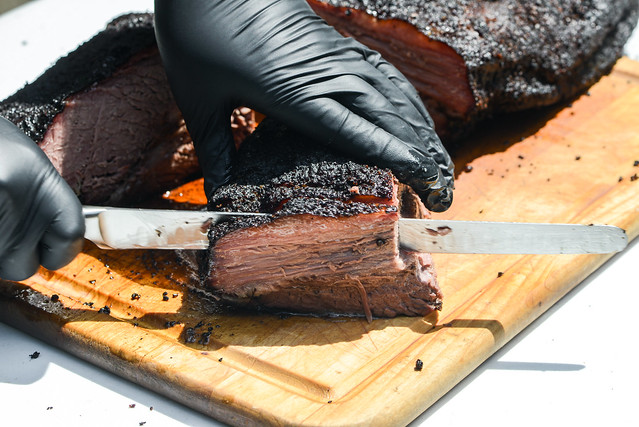 I'm personally really only interested in eating the fatty point section of the brisket, so started my slicing there. I cut off a section and that meat was as tender as can be, but not falling apart, and was oozing rendered beef fat. 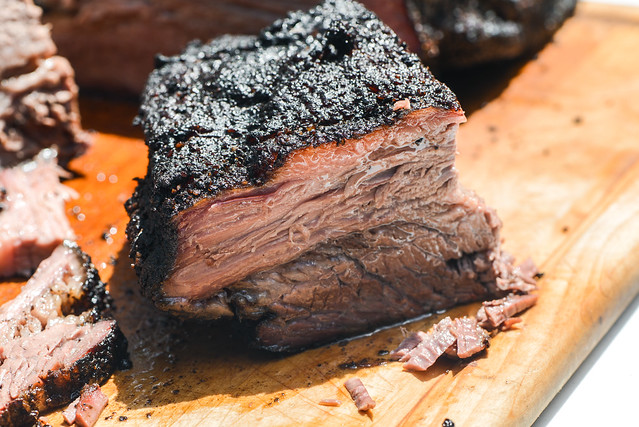 Just look at how damn juicy this thing was—I've never cooked a brisket before that so closely matched what I'm used to getting at the best smokehouses around Texas. 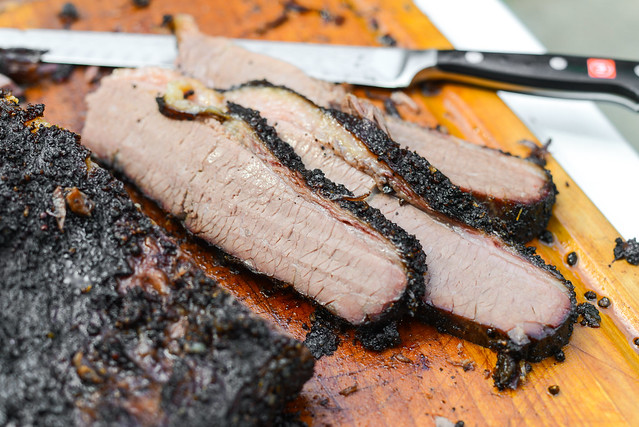 And man, the flavor was so spot on. Of course the luscious fat paired with beefy meat provided immense flavor. The bark was nice and peppery, just the way I like it, with a great balance between being crusty and little tender. It was such an excellent feeling of achievement to make a brisket as good as this one, and I basked in the glory of many of my guests amazement of how juicy and flavorful this brisket was compared to what they're used to it North Carolina and beyond. My first inclination after such a success was to try to repeat it, but making a fourteen pound piece of meat without the crowd to eat it doesn't make much sense, so I'm holding off for now, but am so glad to know that I can have seriously great Texas style brisket at home to get me through those periods when I'm away from the Lone Star state for too long.

Texas-style brisket is nothing more than beef, salt, and pepper, but the end result is a piece of meat so good that it defies explanation.