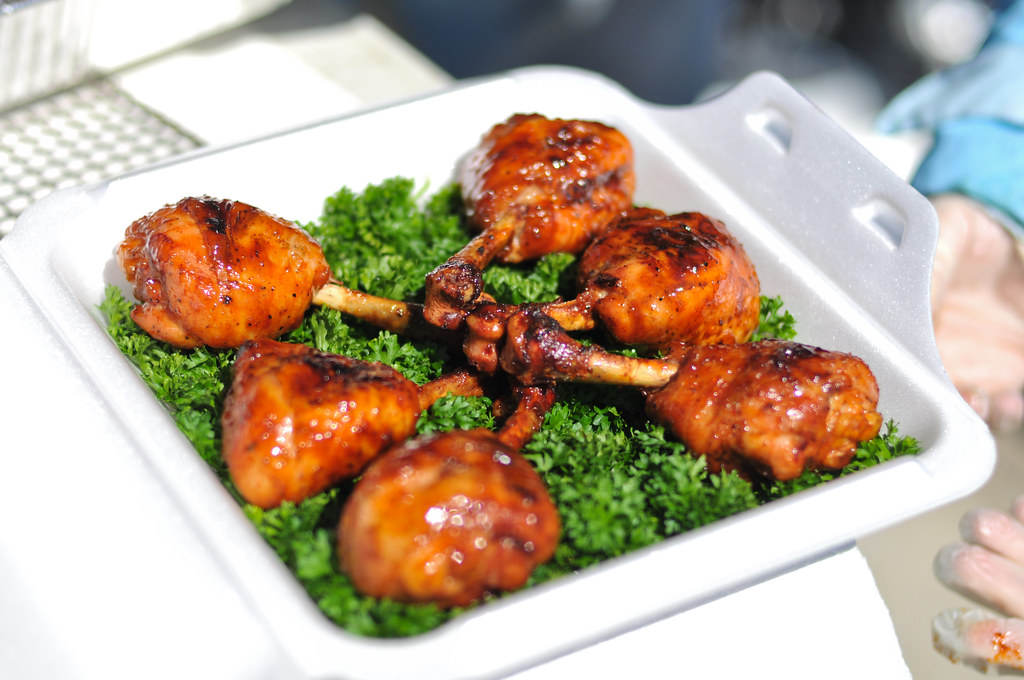 I'm a creature of habit, often finding it hard to crawl outside of my comfort zone. Ever since getting what I consider to be pretty damn good at making barbecue, I've been unable to bring that skill outside of the safety of my backyard. Even with Grillin' on the Bay, New York City's only professional barbecue contest, so close in comparison to most other competitions, entering it has been something I've always convinced myself to dismiss. Although I still didn't enter this year, I finally got off my ass and made the long trek from Astoria to Sheepshead Bay to see what Grillin' on the Bay and competition barbecue is all about. At the end of a day filled with great eats and even greater people, my problem is less that I'm afraid to compete, but more that I'm dangerously close to taking the leap from reserved cooker to full-on competitor with vigor. 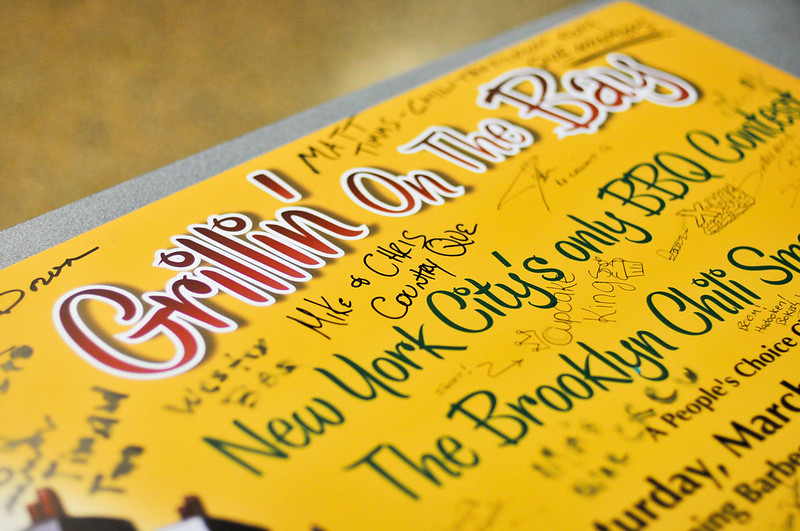 2011 was the seventh year of Grillin' on the Bay, which is headed by Robert over at White Trash BBQ. Although an official sanctioned barbecue event by the New England Barbecue Society, Grillin' on the Bay differs from normal barbecue competition because it spreads its wings past traditional low-and-slow and includes straight-up grilling. The result is a competition with a greater variety of foods and friendlier to folks just getting their feet wet in competition barbecue, which there were many there. 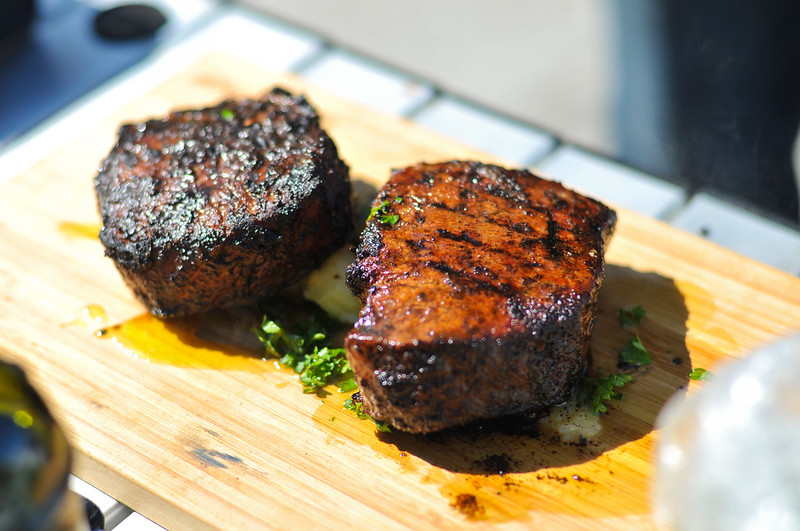 I arrived at the event just a little after 11:30am, when the temperature had risen to a warm 36 degrees compared to the balmy 28 the pitmasters had to endure when they arrived at 6am. I had made it just in time for the first of four turn-ins—beef. Having only 5 hours from the start of cooking until beef turn-in, there was not a brisket to be found. Instead, a wide array of bonvine cuts covering everything from chuck roast to filet mignon were being given their final touches. Each one I was offered to try was so different from the next, which started to get my own mind wondering on what I would have been grilling up if I had taken to the flames. 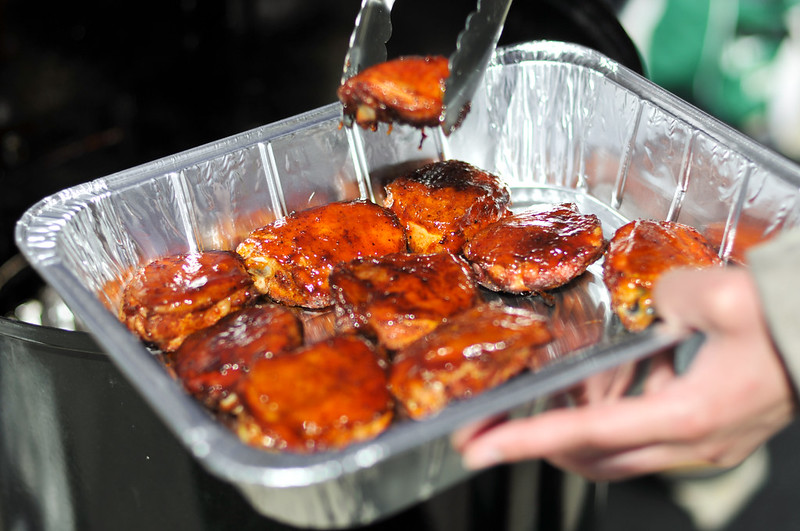 12:45 chicken turn-in was next. With only 45 minutes since the beef, a more frenzied feeling started to come over the teams as I watched chicken wing, thighs, and legs go from grill to box. Again, I couldn't help but start to think if my chicken wings or barbecue chicken that I've worked hard on refining, might be able to overtake what I had been sampling from the other pitmasters. 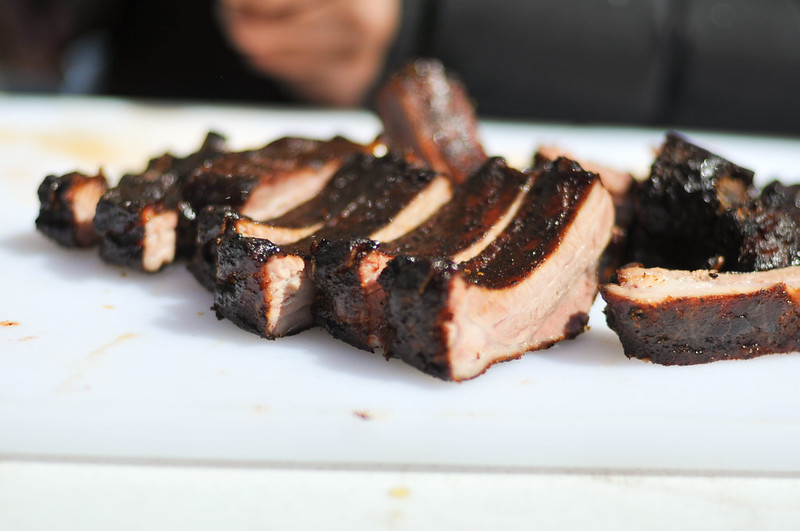 With another 45 minutes passed, it was time for pork turn-in. Unlike chicken and beef, which seemed to invite diversity, just about every team chose baby backs for the pork category. This made sense, since ribs seem to be the biggest point of pride for each pitmaster, myself included, and with only about 6 hours to cook, baby backs are the safer choice over spare or St. Louis-cut ribs. Despite the similarity in cut of pork, all ribs varied tremendously, ranging from saucy to dry, sweet to spicy, and everything in between. All were good, but only few struck the balance in cooking and flavor that I enjoy, and I found myself questioning if those were the same sentiments of the all-powerful judges inside. 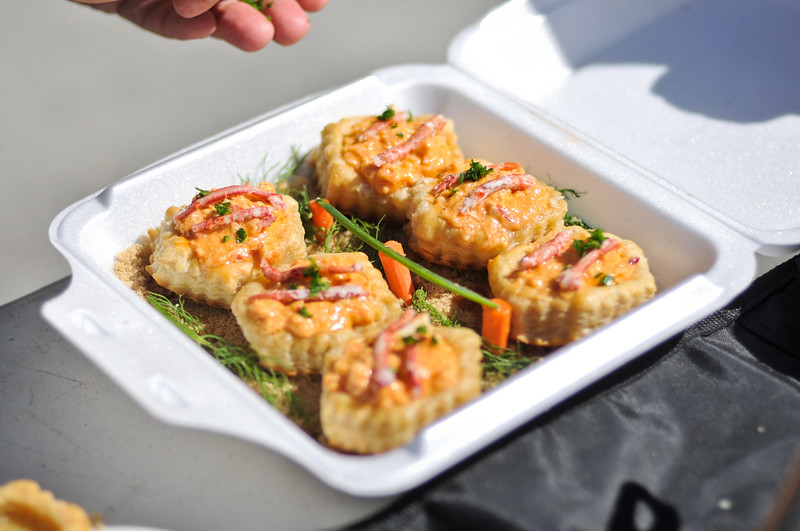 Final turn-in was chefs choice. I can't imagine the complexity of judging this category, as lobster newberg puff pastry went up against tacos al pastor. Worlds apart, this category really showed the creativity of each team and seemed to be the most adventurous and defining. Could this be my place to showcase my favorite stuffed meat creations? 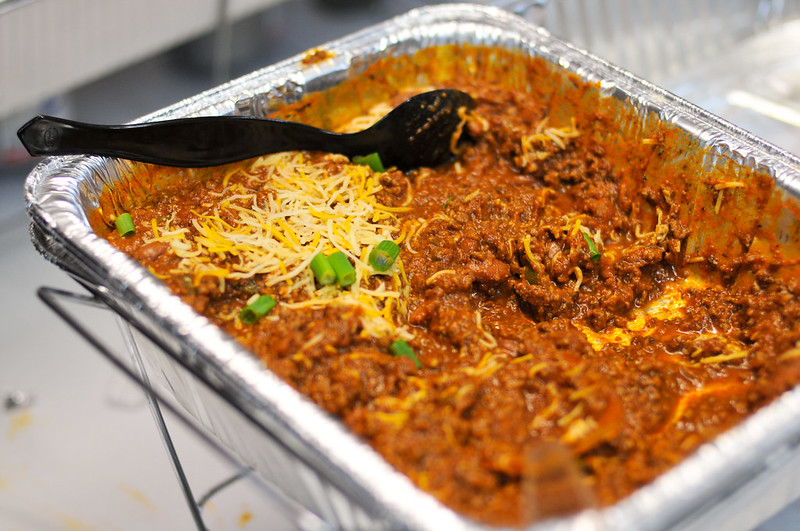 In between all the grilling, a people's choice chili cook-off was thrown in there. If I had done my homework, I totally would have lugged a couple gallons of my "famous" beef chili down with me and entered this. While most chili's stuck to the Northern bean/ground beef standard, there were some standouts, especially a brisket chili from Swamp Pit BBQ, which is the way chili has to be done in my book. 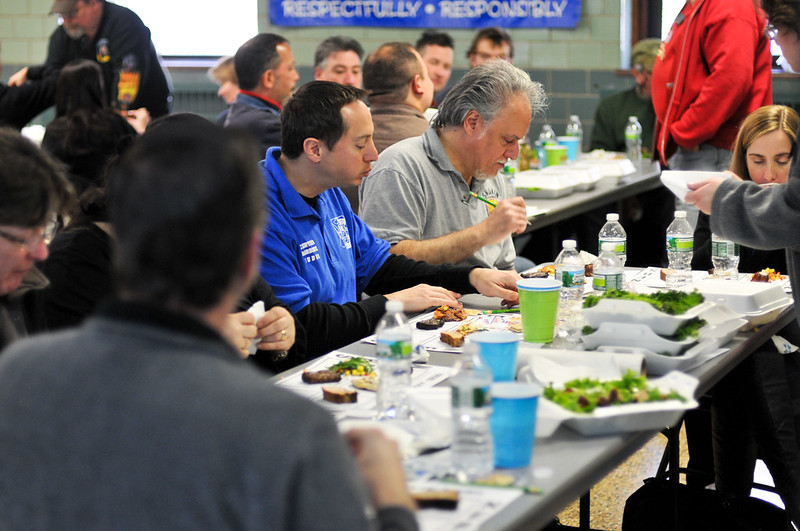 As I ate my way through the day and watched the judges record their marks, I became filled with the feeling that this is no way beyond my reach. By the time I left, I was already running through to process of putting together a team, raising funds, and waking myself up at 4:30am to be down in Sheepheads Bay by 6am this time next year. I came home and shared that sentiment with the wife, who's eyes showed the fear that I was about to be bitten by the competition bug, but when that's doing what I love and sharing a beer or two with a bunch of excellent people, maybe this is an idea who's time has finally come for me. Until we see what next year brings, I'll leave you with some more sights from the day. 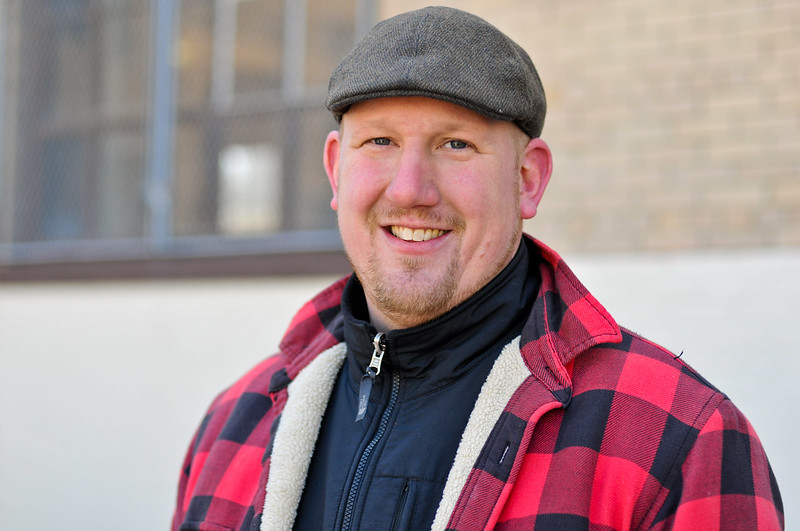 Here is BBQ Billy, who I've known from Twitter and was happy to finally get to meet in person. 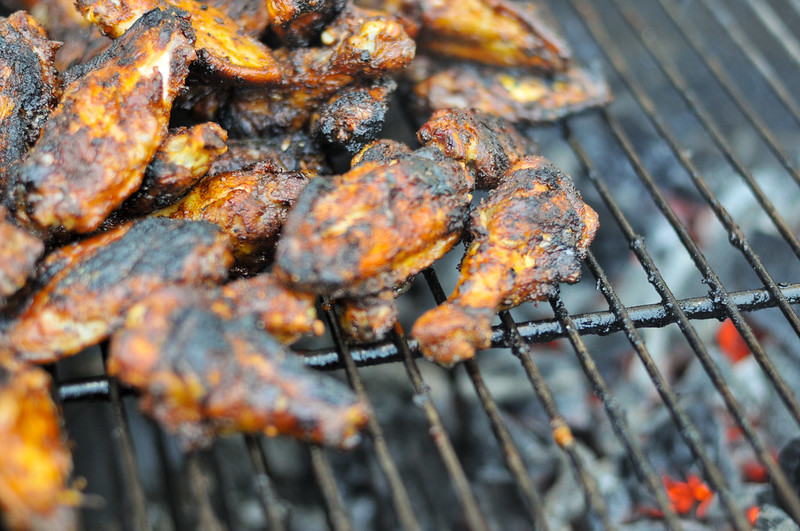 Billy's wings for the chicken category. 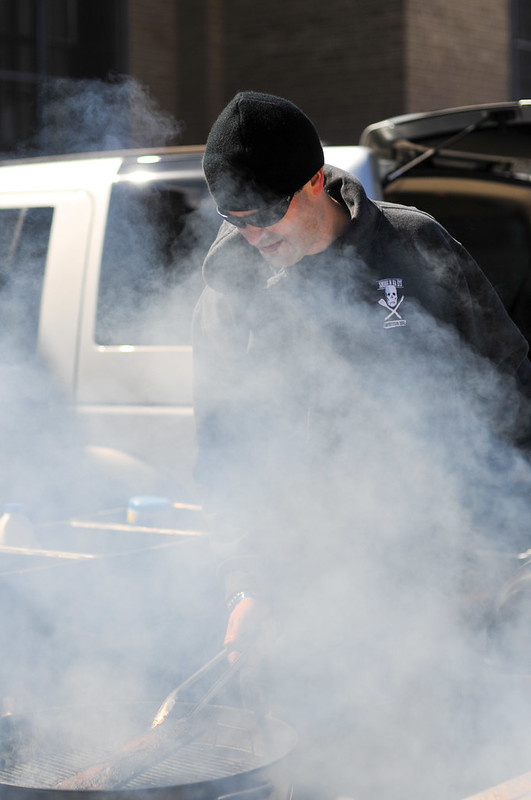 Clint Cantwell from Smoke in da Eye engulfed in smoke. 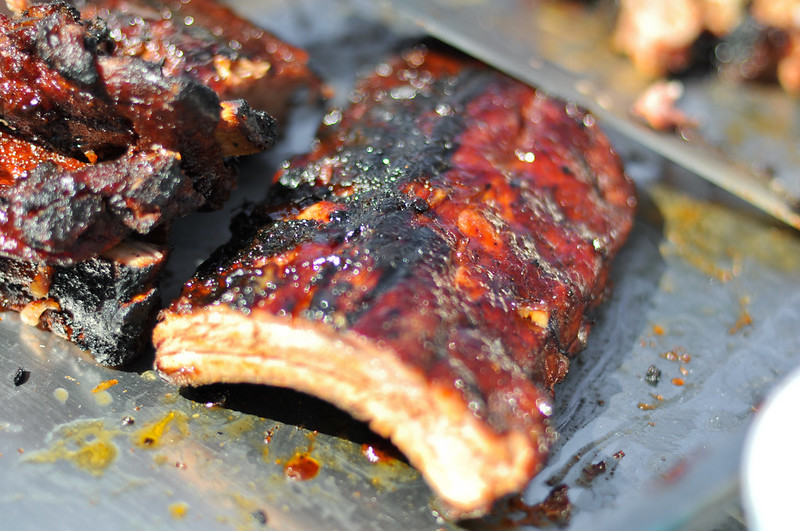 Clint's ribs that didn't make the cut for turn-in, but still tasted awesome. 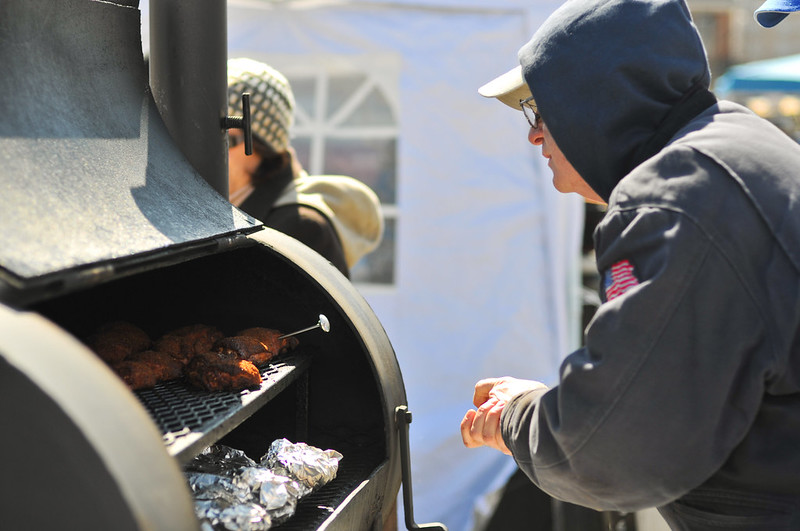 Checking the temperature of chicken thighs at Damn Yankees. 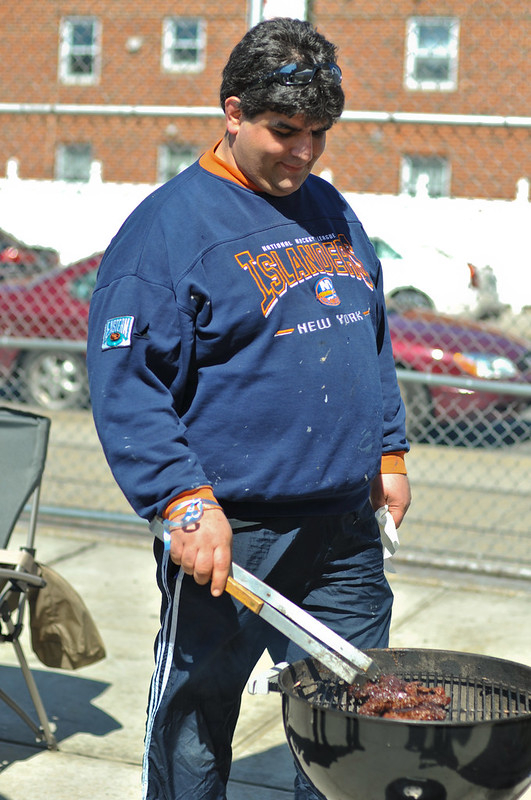 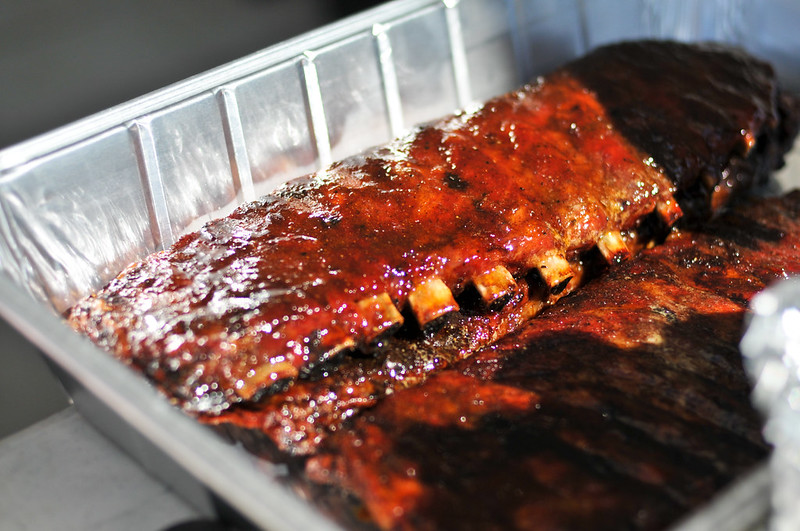 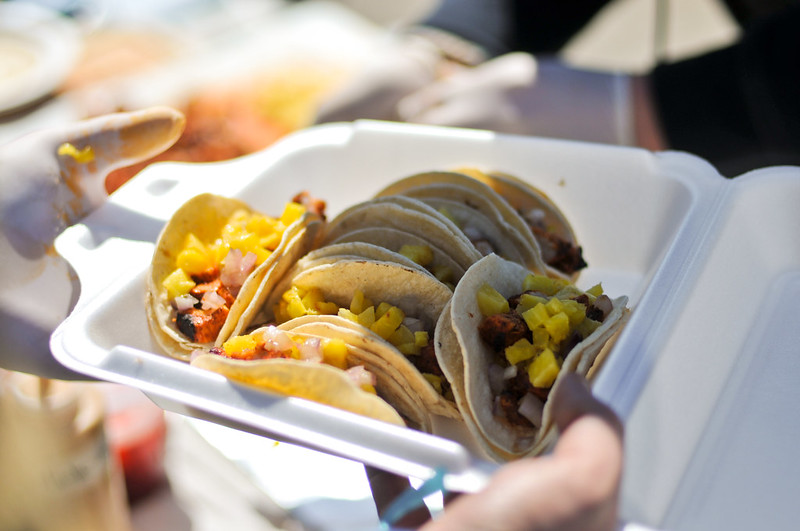 More sights from Grillin' on the Bay >>