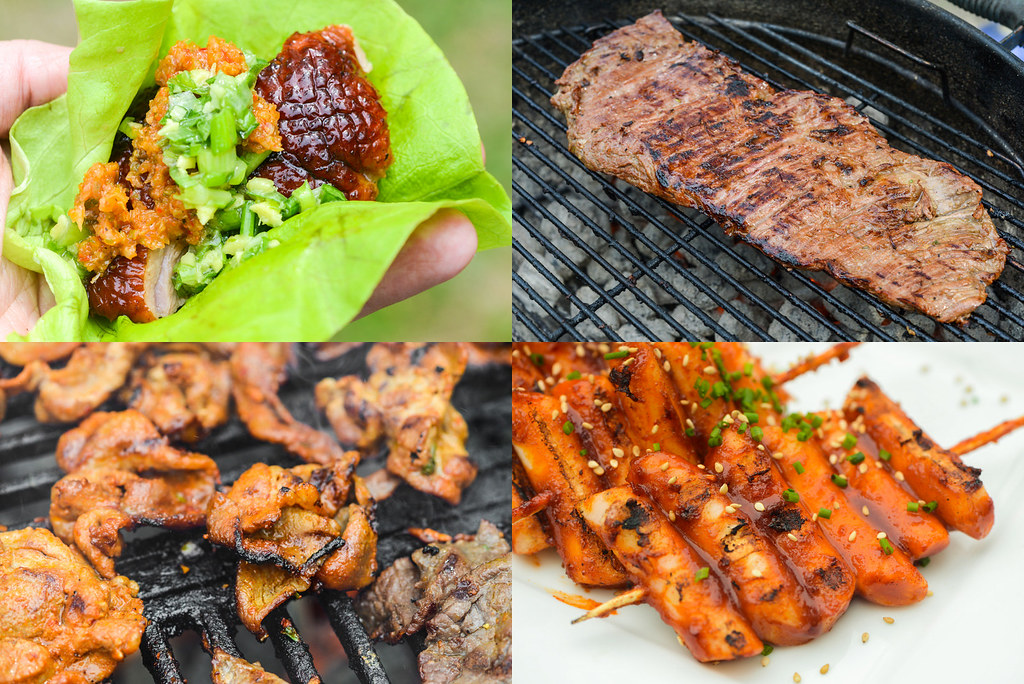 Man, I'm not sure how I survived so long each year when I was in New York without a Meatwave. It was only back in mid-October that we had our last one here in NC, but I've been so itching to get this 15th season started that it's felt way, way longer than that. I think the fact that the cold, snow, and rain put dampers on previous attempts to get things started up again have made things worse, and I felt a growing anxiety as my list of recipe ideas kept getting longer as more time passed. Well, this past Sunday we were finally blessed with a beautiful day to kickoff this season, and I made sure each dish in this cookout really counted. 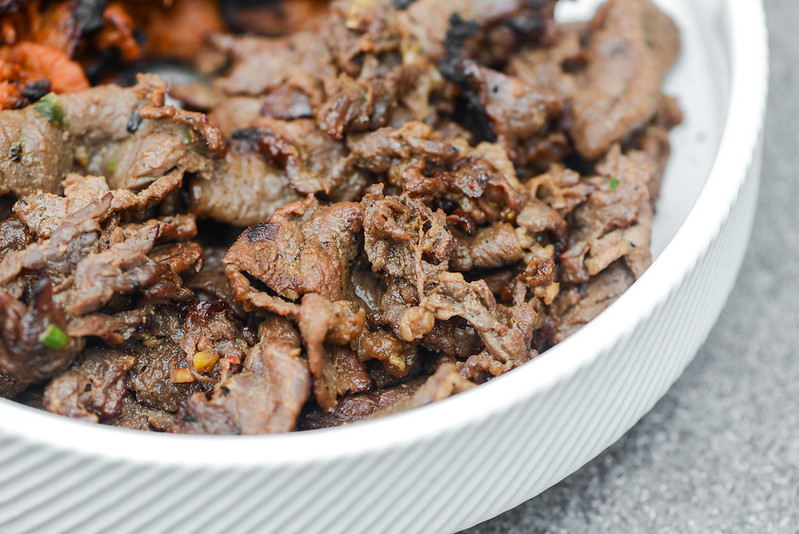 I've had a bucket of ideas for Korean-influenced menu items that I knew was going to be the right way to start of the season. A lot of them involved improving on both my beef bulgogi and daeji bulgogi (spicy pork) recipes and serving them in creative ways. So those two meats served as the anchor for the day, and they could be enjoyed with rice, as lettuce wraps, or... 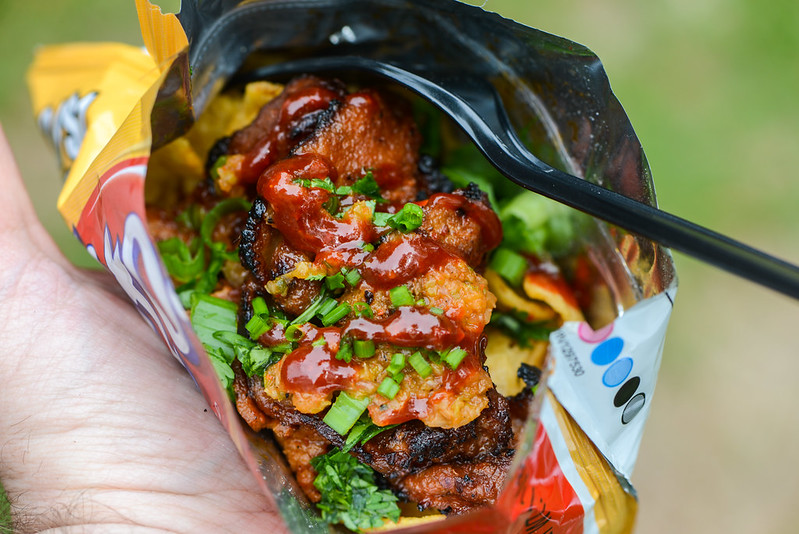 Walking tacos! Not long ago, I had a plate of bulgogi fries at one of my favorite spots in Durham, Namu, and thought these flavors would all be great in a walking taco format. So I bought a bunch of small bags of Fritos and filled each with some delicious bulgogi, kimchi, cilantro, chives, and a spicy Korean barbecue sauce and the outcome was fantastic. A nice salty crunch to compliment a wave of complex spicy, sour, and meaty flavors definitely created an experience worthy to lead off a milestone season. 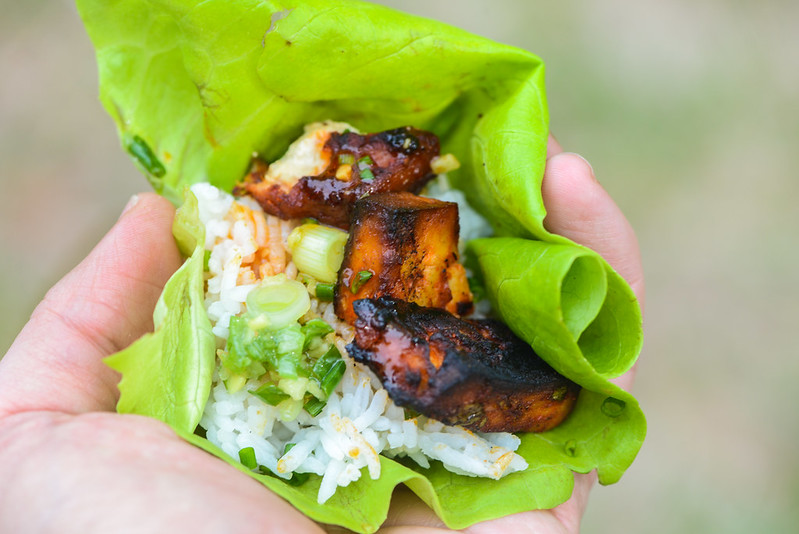 Not wanting anybody to miss out on what I considered to be the highlight of the day, I also made both bulgogis in tofu form for the vegetarian crowd to enjoy. And enjoy they did, finishing off a two large bowls of each variety by the day's end. 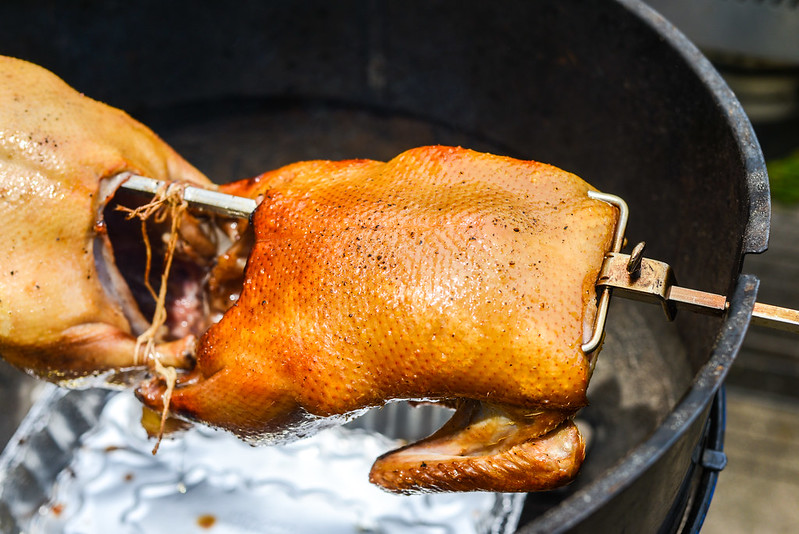 Next up I wanted to try a hybrid recipe that utilized the Peking duck process, but used Korean flavors and served in ssam style. The process took almost two days and included a honey-soy seasoning, salting, and air drying before giving the ducks a spin on the rotisserie with a chunk of cherry wood through on the fire for good measure. I think these were the best ducks I have ever cooked—they had really juicy, medium breast meat with a golden and crunchy skin. And they only got better when assembled into wraps with bibb lettuce, kimchi, and Momofuku's recipes for ssam and ginger-scallion sauces. 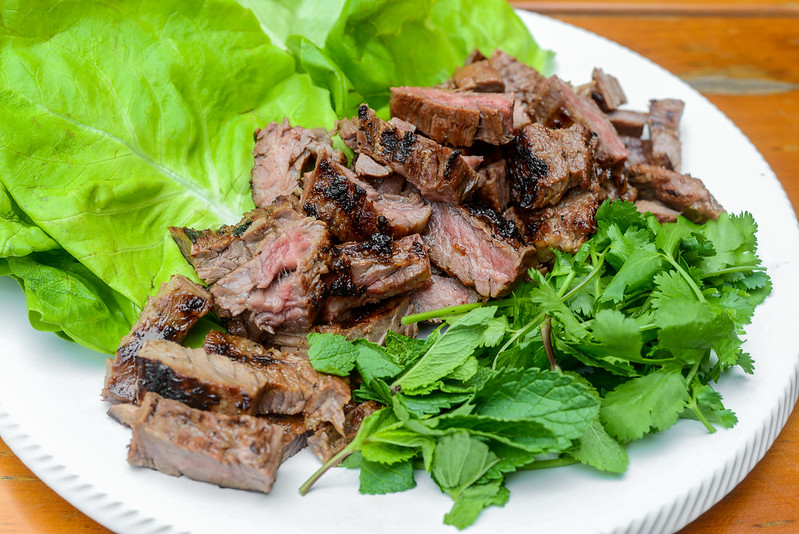 Also presented and assembled in the same manner was a skirt steak ssam. I actually had originally planned to do the Momofuku hanger steak ssam by the book, but then once I couldn't procure any hanger steak and switched to skirt, I decided to change up the recipe a bit to something more closely aligned with how I would approach a marinade. The result was a damn tasty and tender skirt steak that made for another notable meat of the day. 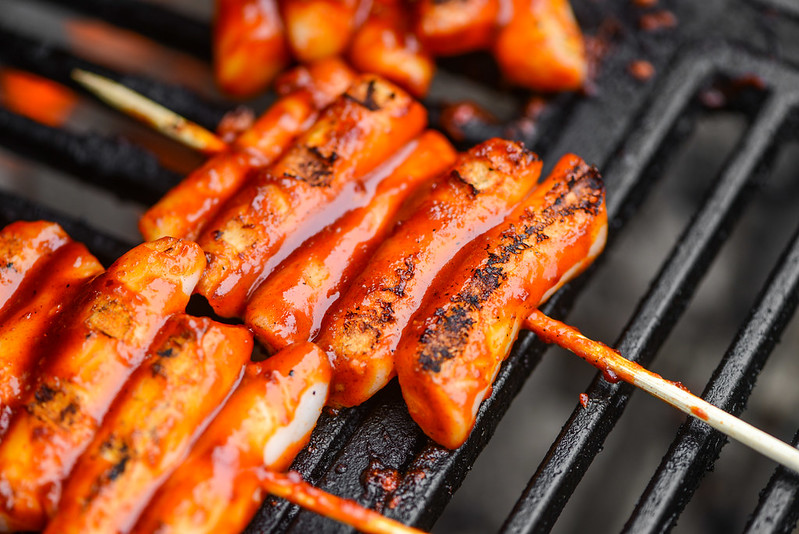 As a side dish, I thought it would be an interesting idea to try grilling tteokbokki, aka: rice cakes. I've been cooking a lot with rice cakes recently, and my normal course of action is to include them in stir fries, but I thought the grill might add new flavor and textural components, which it certainly did. After boiling the rice cakes, I skewered them and grilled them while brushing on a spicy Korean sauce. The rice cakes picked up some char and crunch that elevated normal tteokbokki into something even better, in my opinion anyway. 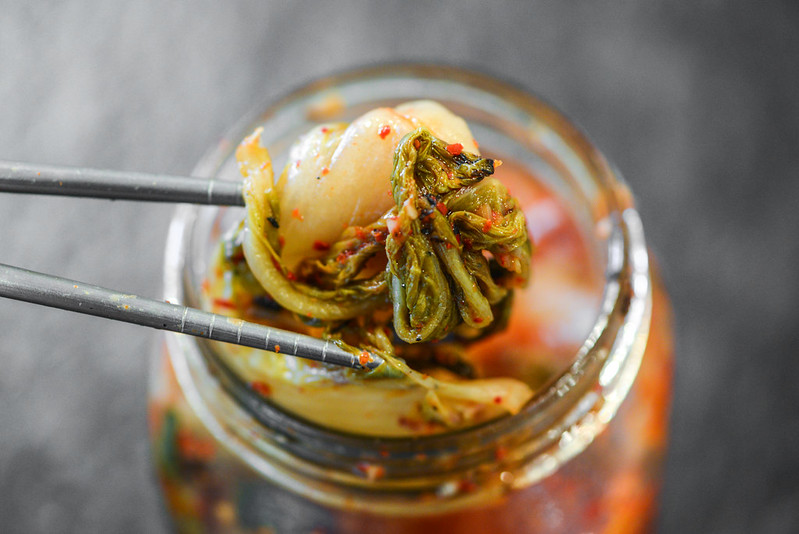 And we mustn't forget the kimchi, that was also grilled. I had actually grilled the cabbage and started fermenting this kimchi over a month ago, when I thought I was going to start the Meatwave season in March. When that didn't happen, I just kept letting it ferment, and on serving day, I worried that the now extremely sour cabbage may be a little too pungent for most folks, but I got a lot of compliments on it and the bowl was empty when it was time to clean up, so it definitely went over better than I was expecting. 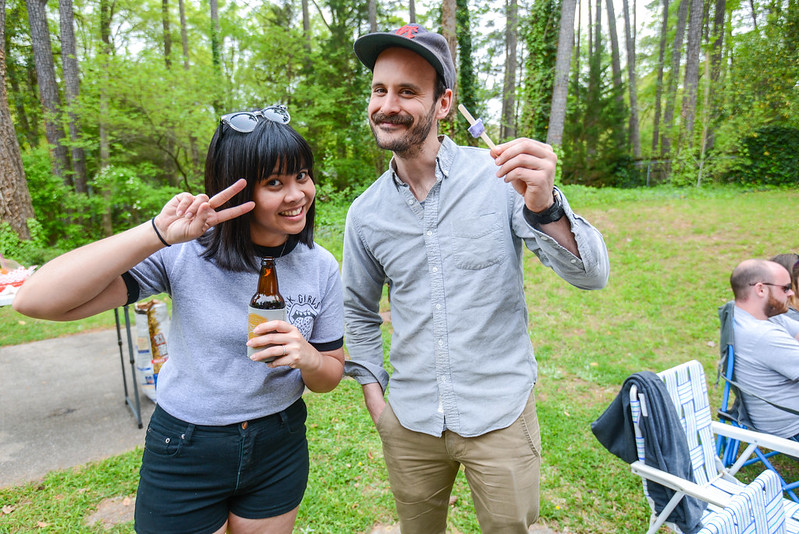 A gnawing desire to get cooking was only a small portion of the equation that made the wait for this Meatwave feel so long—it was sharing the day and food with all my friends that was the part really missing for me. So I was so happy to have a huge turn out, starting here with my partner in crime, Kristin, and Evan, who's enjoying one of the many frozen treats Kristin raided from the H Mart freezers. 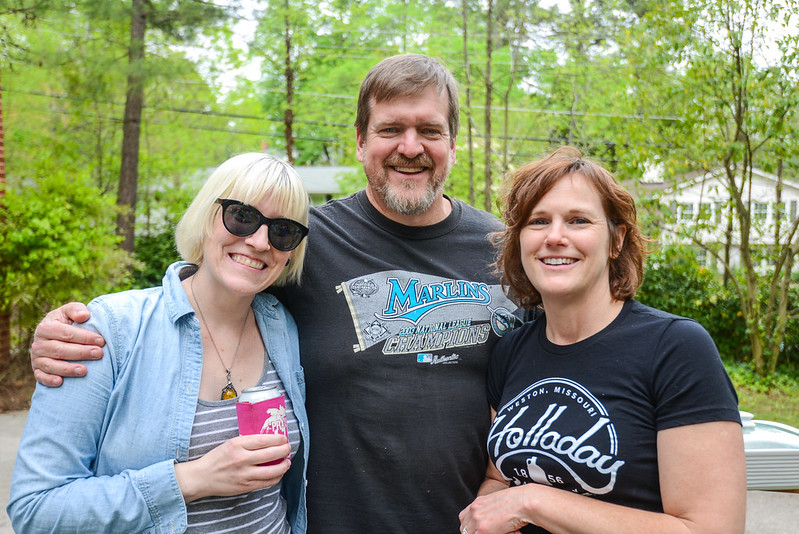 So happy to have Leslie, Chris, and Sue return to help kick things off. This will be an extra special year for Leslie because by the time the Meatwave comes to a close, she'll have brought a new Meatwaver into the world! 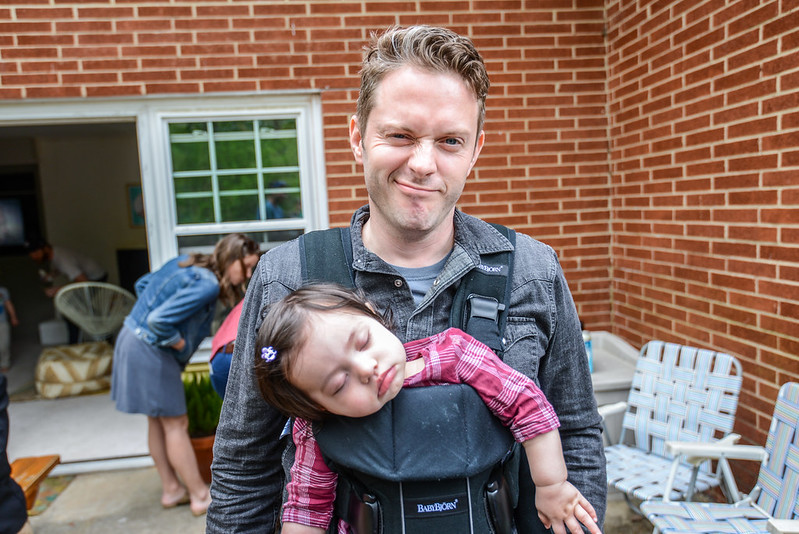 And talk about new Meatwavers, we have sleepyhead Anika here with papa Patrick. Anika actually made an appearance last year, but she's grown so much since then and was enjoying the day in all new ways with so many people to see and new things to experience. 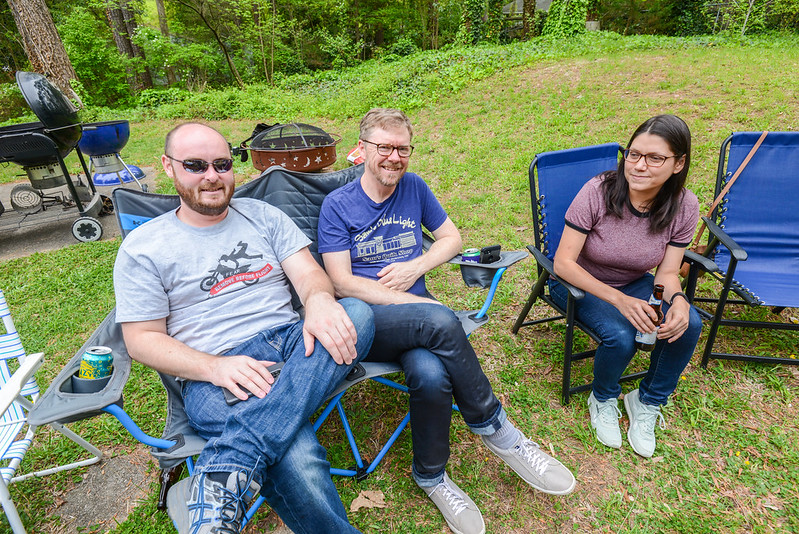 Now we move on to a couple of first timers, Ryan and Mel, on either side of diehard Meatwaver Steve. We happily depleted our booze supply at the end of last year, and we were so lucky to have Mel join in because not only does she work at local brewery Ponysaurus, but she almost makes her own brews, so had some great additions to help us restock. 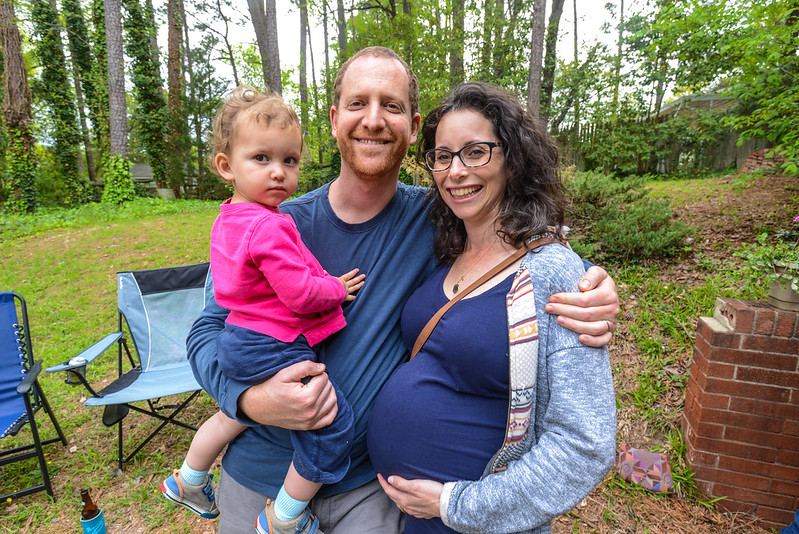 Also in the category of soon-to-add a Meatwaver are Sarah and Gabe, here with their little one Neko. I struggled last year to get a good family photo of the them, but as soon as I aimed the camera this time, Neko turned around and gave a stellar look. 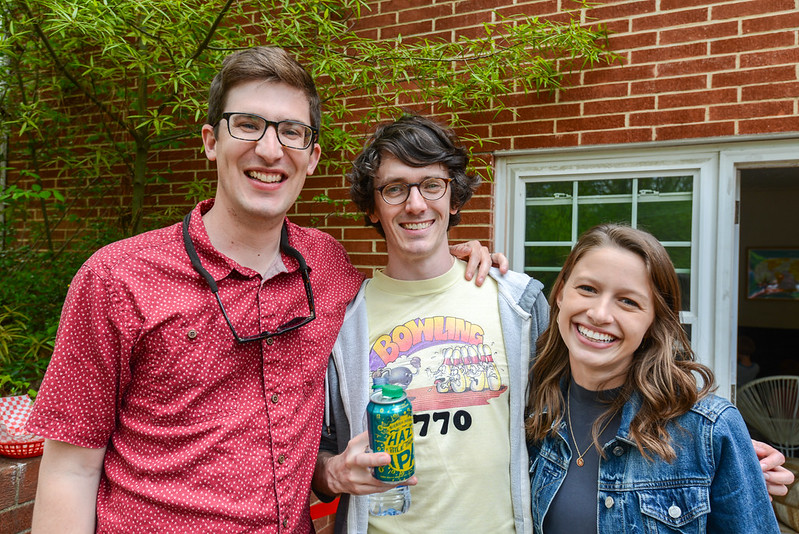 Next we have Zach and Maria returning for their third year, bringing along Stuart, a buddy from Bronto who started there just before I left. Getting together with old office mates makes me just a little nostalgic for my pre-work from home days, but really just a little though. 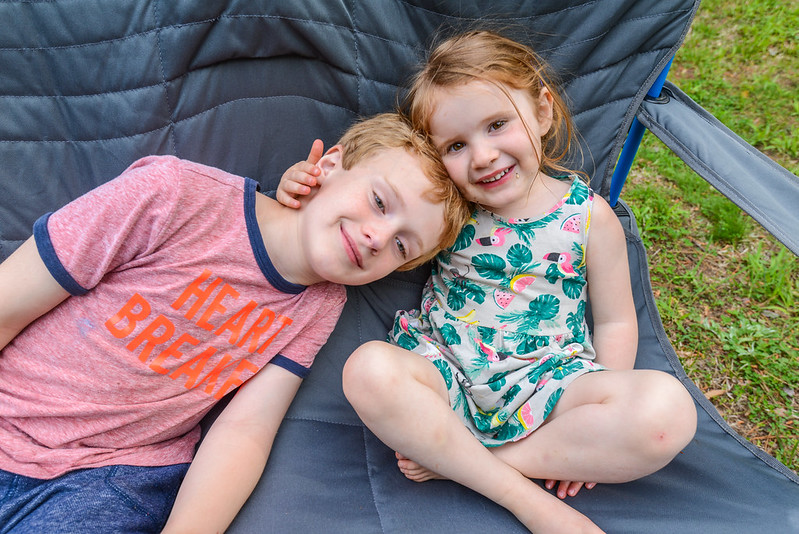 We can't leave out Benji and Annie, who we caught here at the end of the day in a genuine display of sibling admiration, which came after all the running around and chaos of early on ceased. 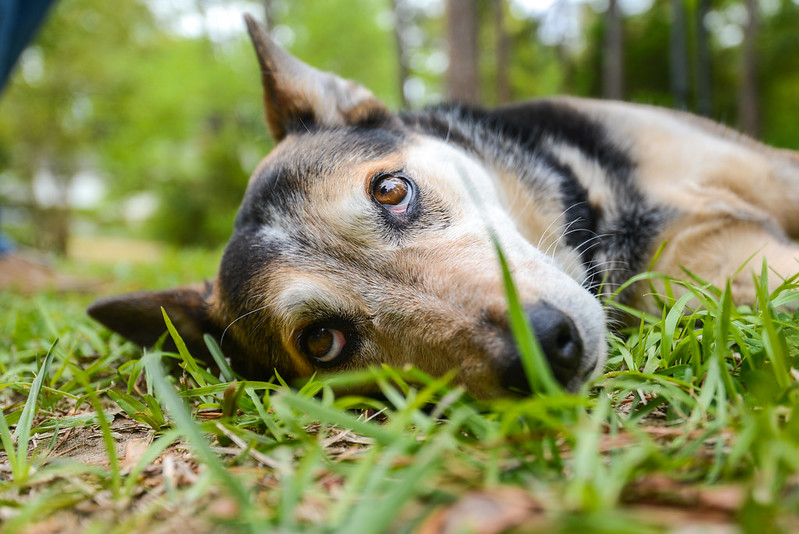 And last, but never least, is Betty. She's such a great dog that she never seems to every steal anyones food, although the desire for a piece of what we're all eating is definitely there. She got a little taste this week when she found where I dumped my duck fat in the woods, making everyone wonder what she was doing back there. It's great times like these that had made me so sorely missing the Meatwave over the winter and start of spring, and so happy that it's finally started again! 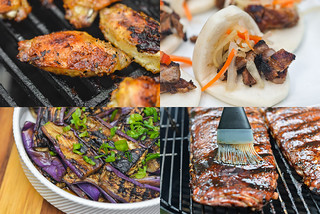 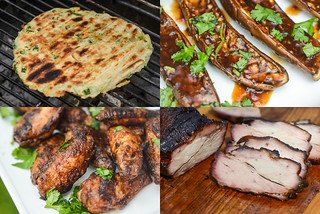 Meat and You, and You and Meat