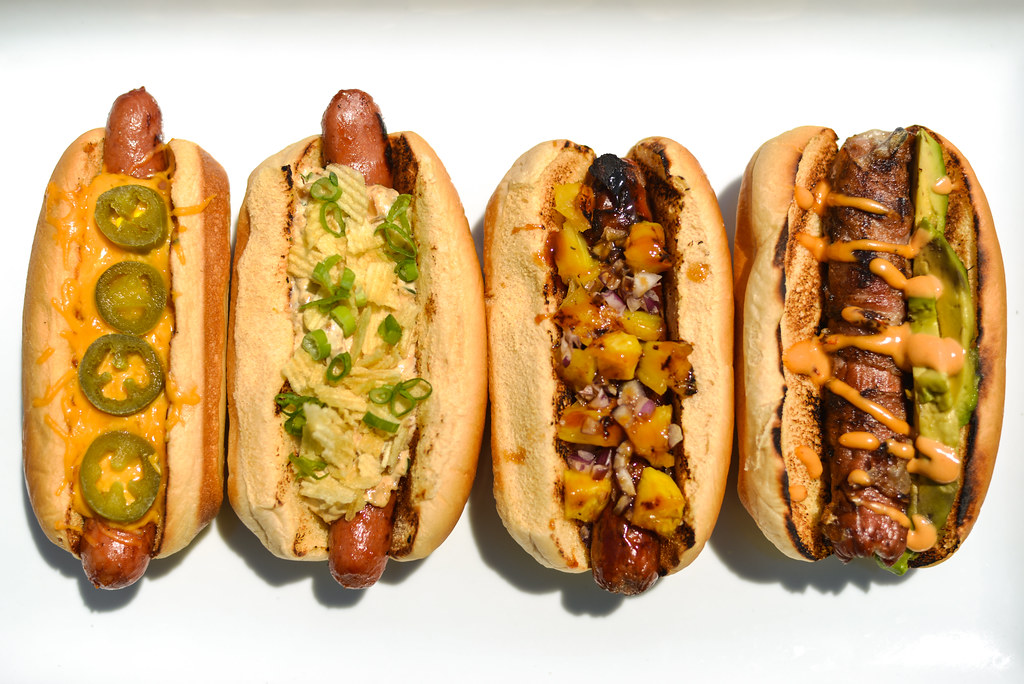 Ketchup, mustard, relish: classic hot dog toppings, right? Yeah sure, but is anyone going to really give you props for that? If you really want to be a hero of the grill, it's time to step up your hot dog game and I have eight awesome topping ideas to help you do just that. 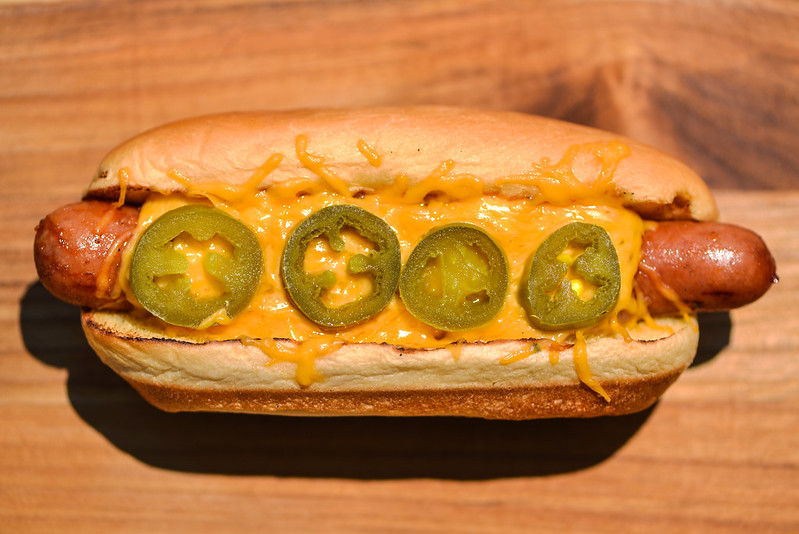 Texas nachos are a staple in my house. Unlike your normal fully loaded nachos with piles of every condiment in kitchen making the bed of chips underneath a sad, soggy mess, Texas nachos tops individual tortilla chips with Longhorn cheddar, a slice of pickled jalapeño, and sometimes refried beans. I took that topping combo to my first hot dog variation and I don't really need to convince you this was amazing, do I? 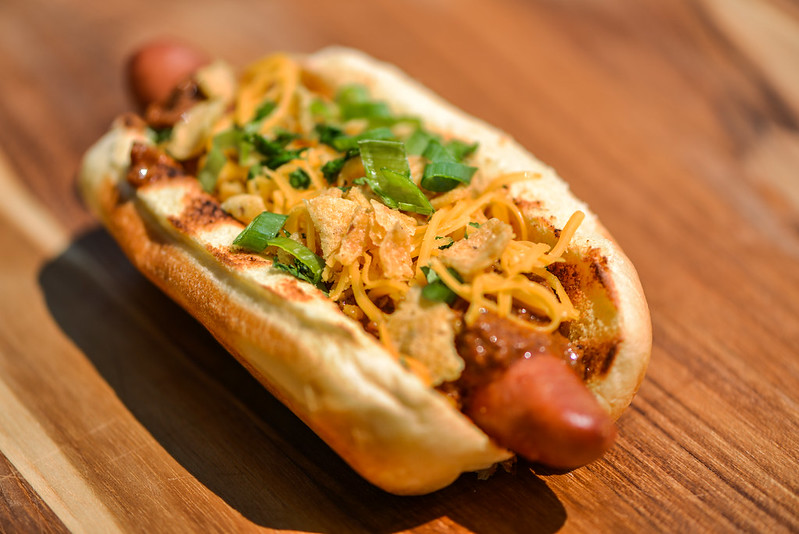 There's nothing quite as comforting in the winter as a bowl of Texas chili, which is even better served as Frito Pie—salty corn Fritos topped with the chili and garnished with goodies like cheddar, cilantro, green onions, jalapeños, and sour cream. To create a summery version of that classic dish, I gave a hot dog the Frito-Pie treatment, using all the same toppings along with this condiment chili recipe). Hot dog that Frito Pie chili dog is good! 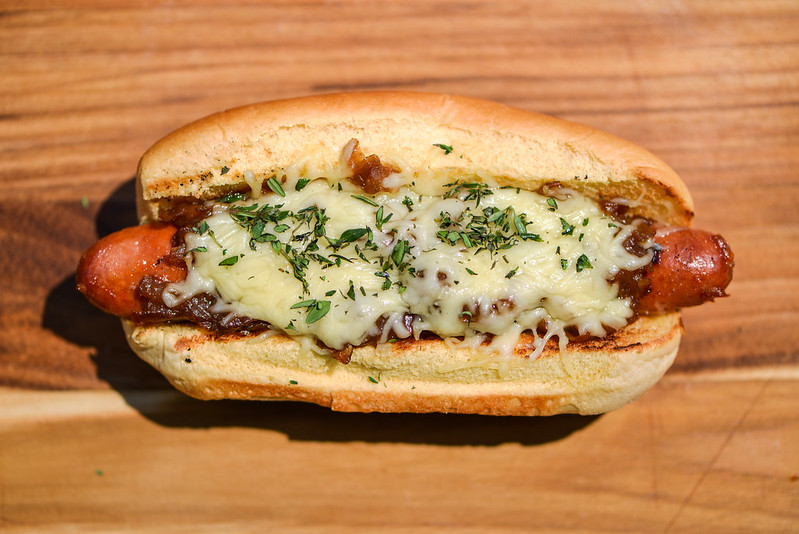 I love a good bowl of French onion. I love it so much that I've brought it into a few other forms in the past, like a gruyere cheese dip. Given how well it work there, I didn't see why it wouldn't work on a hot dog as well. On top of a grilled frank, I spread on a heavy layer of caramelized onions and Swiss cheese (I would have opted for Gruyere if I had it in the house). I let the cheese melt over indirect heat on the grill, then added a sprinkle of fresh thyme. The sweet onions and creamy cheese once again proved this combo can work wonders in a variety of settings. 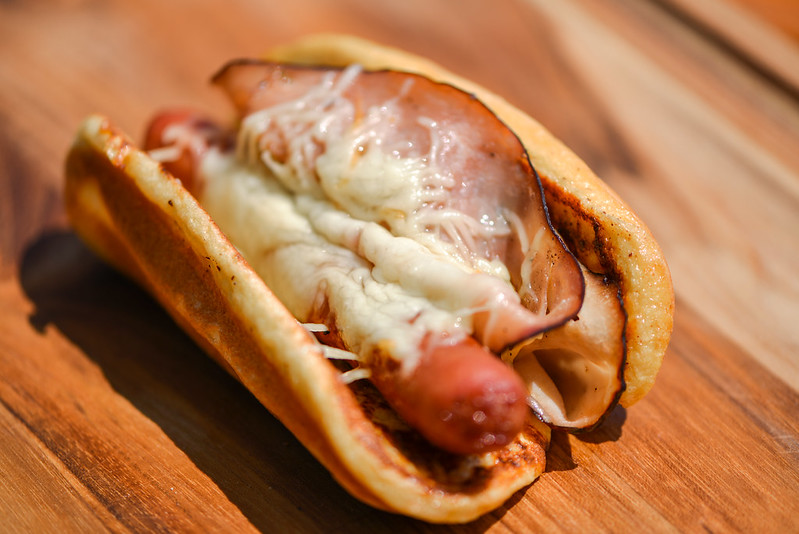 I'm a sucker for a Monte Cristo—French toast topped with ham, turkey, and Swiss cheese—and having started my hot-dog explorations in the morning, I had the idea of using those flavors on a grilled dog. The bun was given the French toast treatment, then loaded with a hot dog, a slice each of grilled ham and turkey, and grated Swiss. I then put it back on the grill to let the cheese melt before giving it a final light drizzle of maple syrup. It certainly had a breakfast flavor, but I could imagine eating this eggy, sweet, and meaty hot dog at any time of the day. 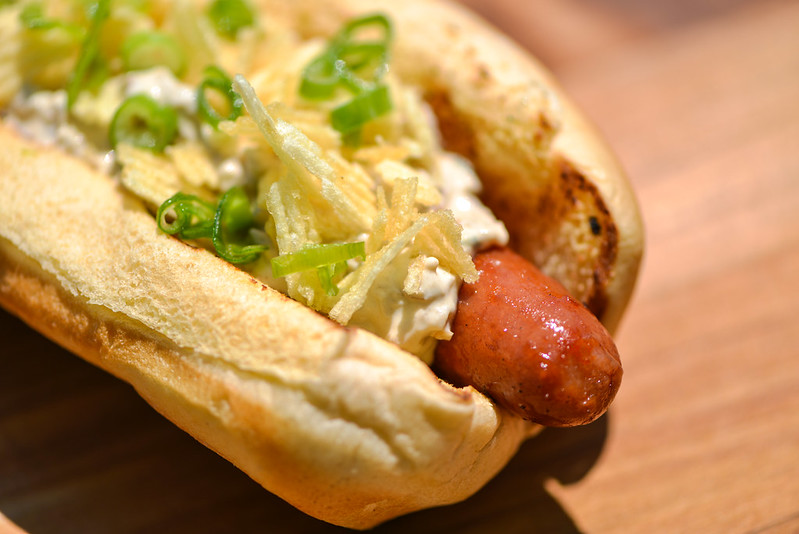 Having a lot of extra caramelized onions from the French onion dog, I used those leftovers to make a French onion dip. As I dunked my ruffled chips into that sweet and tangy dip, I couldn't help but think that this would be yet another great hot dog topping. So I slathered a mess of it onto a hot dog in a bun, then added crushed chips and green onions. I would have preferred chives over the green onions, but this still managed to be one mighty fine set of hot dog toppings, especially the chips, which added a nice salty crunch. 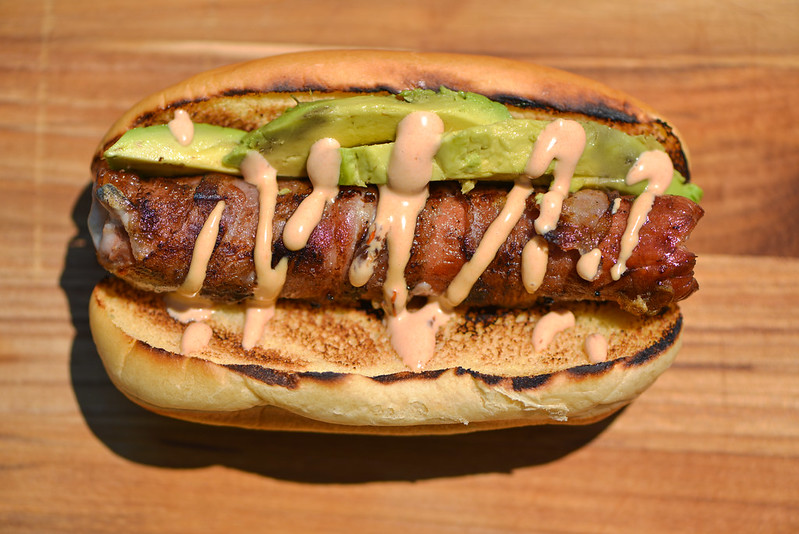 I wanted to make my own cheese-stuffed hot dog, so I split a frank lengthwise, stuffing it with Monterey Jack cheese, and then closing it up with a couple strips of bacon. I cooked the bacon-wrapped hot dog over indirect heat, then crisped it at the end over direct heat. Once nestled into a toasted bun, I finished it with a few slices of avocado and a squeeze of chipotle mayo. Having so many flavors, from smoky and meaty to cheesy and spicy, this was one killer hot dog worth the extra effort. 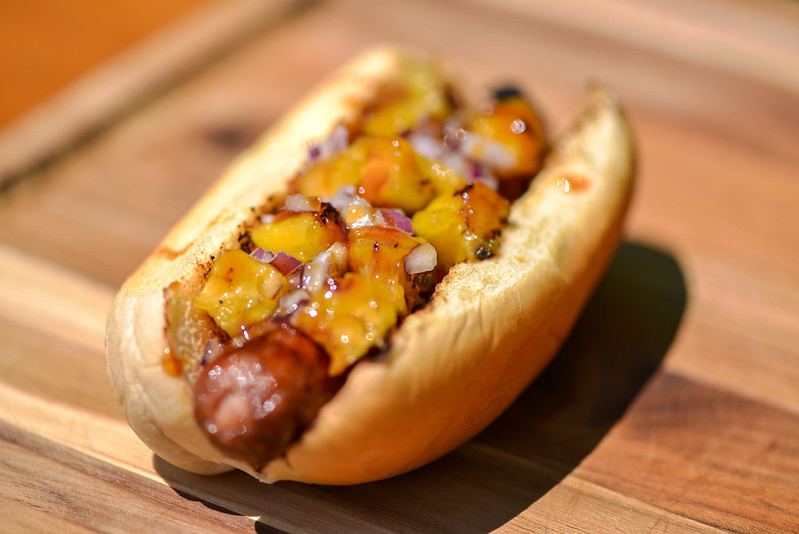 This variation is inspired by bacon-wrapped chicken skewers with pineapple and teriyaki sauce I made last year. I wrapped the hot dog in bacon, then brushed it with teriyaki sauce at the end of cooking. I placed the glistening, glazed frank in a toasted bun, then topped it with with diced grilled pineapple, chopped red onion, and a light drizzle of more teriyaki sauce. It was a personal favorite. 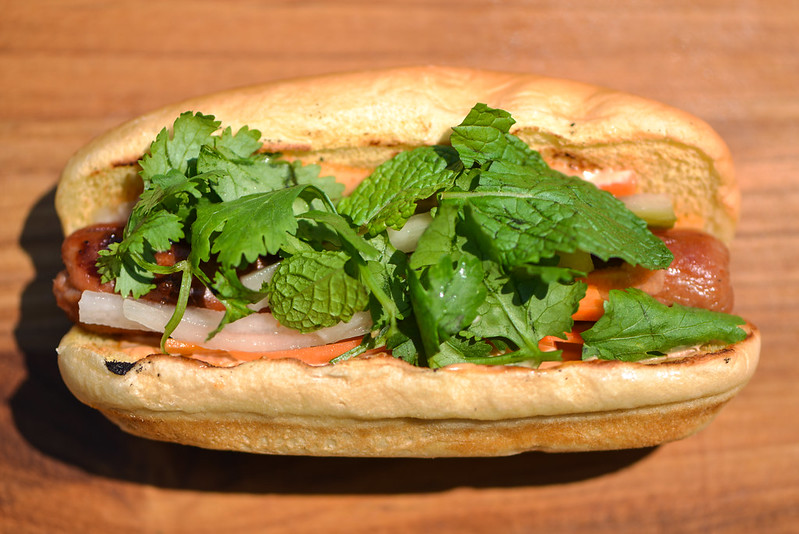 Having a jar of quick-pickled daikon radishes, carrots, and cucumbers sitting in the fridge, I put those to use in my last hot dog of the day. Topping this dog as I would a banh mi—with pickled veggies, fresh cilantro, mint, and siracha mayo—resulted in a fresh and bright flavor that was the perfect foil to an afternoon of heavy hot dog eating. For a spicier touch, some slices of fresh jalapeño can be added in as well. 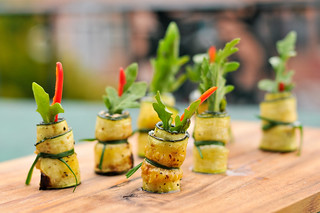 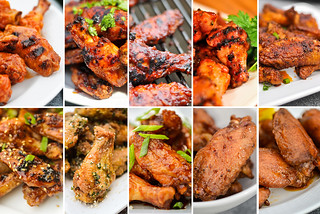