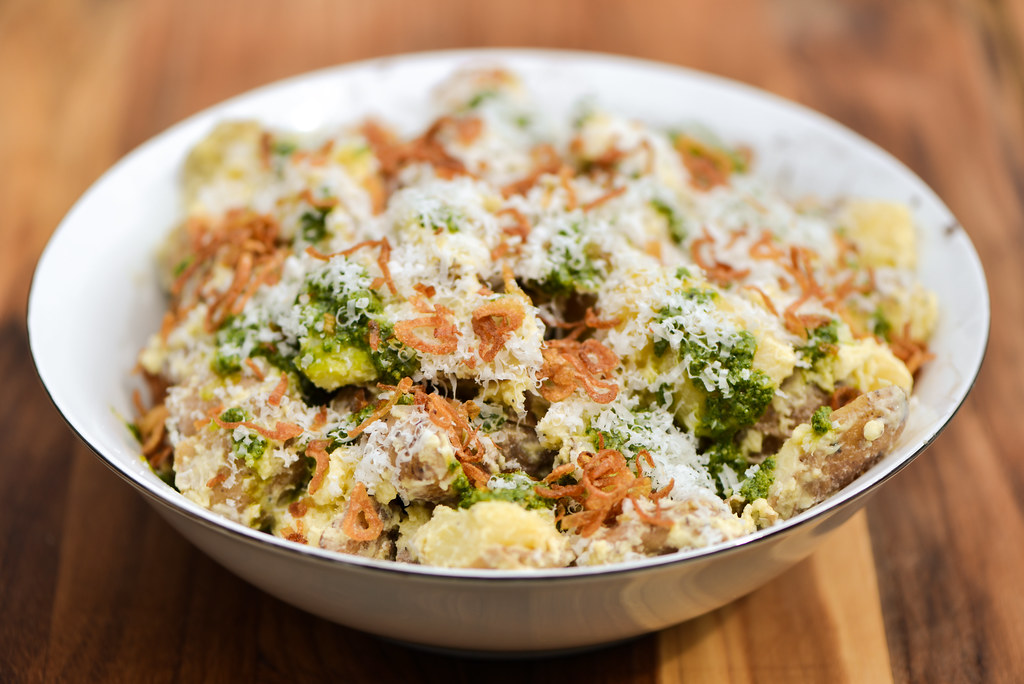 There are some neighborhood restaurants that just feel like home. It'll take some time for me to find that place in my new locale of Durham, but back in Astoria there was no question that Il Bambino played that part in my life. It's a small panini shop that opened a few years after I moved to the neighborhood, and I was instantly enamored of their excellent sandwiches, welcoming owner, and a killer cannellini bean salad with pesto that quickly became my go-to appetizer. The restaurant hasn't changed too much over the years, and while the menu fluctuates just enough to keep things interesting, my main comforts have persisted over time.

It was a sad day though when I came in and saw that the bean salad was not on the menu. In its place was an unassuming fingerling potato salad. I ordered it, skeptical any dish could replace my fondness for the bean salad, but was taken aback with just how amazing it was.

Tender and creamy fingerling potatoes were coated in a truffle aioli, drizzled with the same fresh basil pesto that made the bean salad so magical, sprinkled with sweet and crunchy fried shallots, and generously topped with delicate shavings of sharp and salty pecorino romano. One bite and I'd nearly forgotten about that bean salad.

So, when I was considering what side to bring to my first cookout I was invited to down here in NC, I felt like anything less than this particular combination of ingredients would be selling myself short. It's rather process-heavy as potato salads go, but it's worth every second of it. 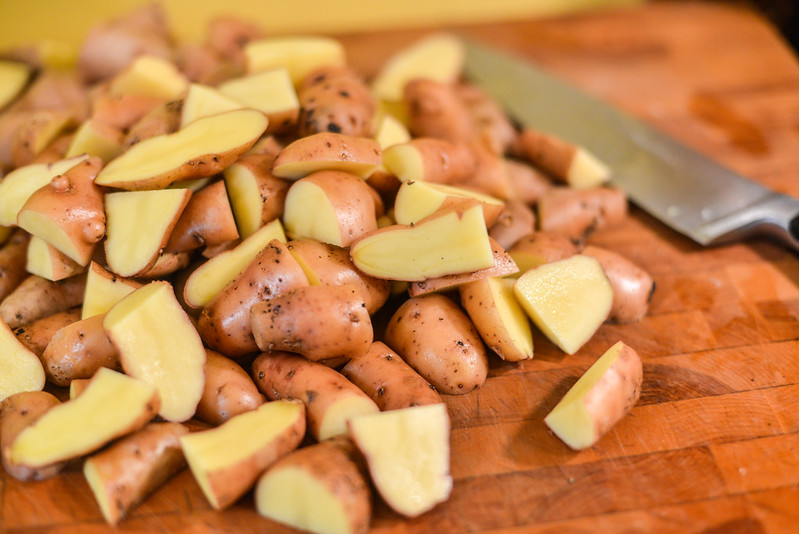 While the salad on a whole requires a lot of different components, each part is easy, especially since I had great resources to pull from thanks to the previous work my colleagues and I had done over the years at my other blogging home at Serious Eats. At the beginning of last summer, my editor Kenji posted his own take on a fingerling potato salad and his method there had me on the right path to perfectly tender, well seasoned spuds that remain intact. 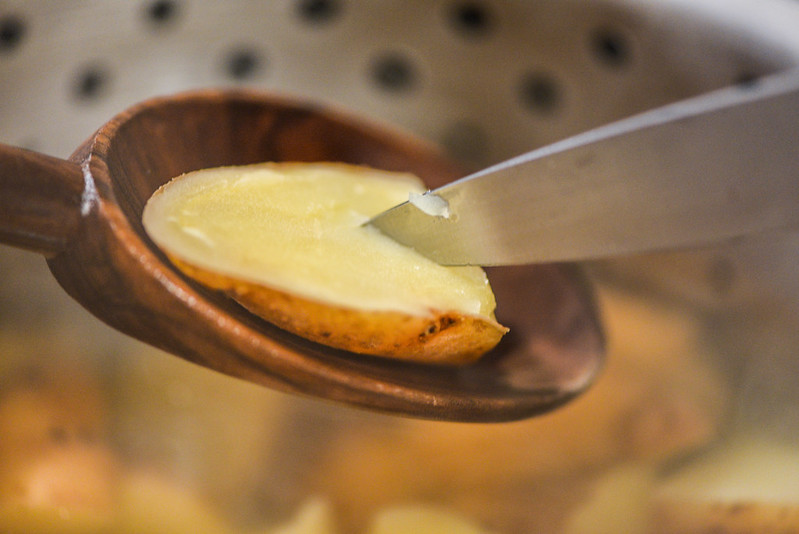 The process involved simmering the potatoes in salt-and-vinegar-spiked water until tender. The salt and vinegar season the potatoes throughout, while vinegar also helps to keep the potatoes from breaking apart while cooking. 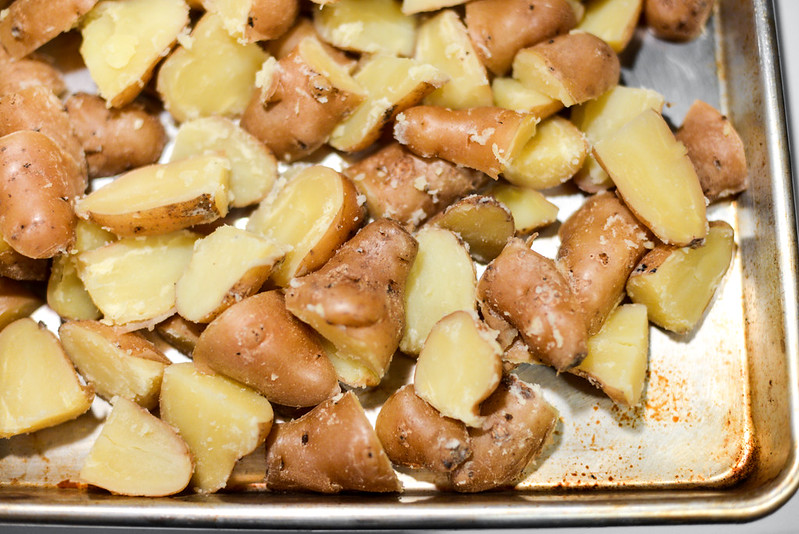 Once the spuds were tender all the way through and drained, I tossed them with an additional tablespoon of vinegar to further flavor them, and then spread them out on a baking sheet to allow them cool and let the excess moisture evaporate. 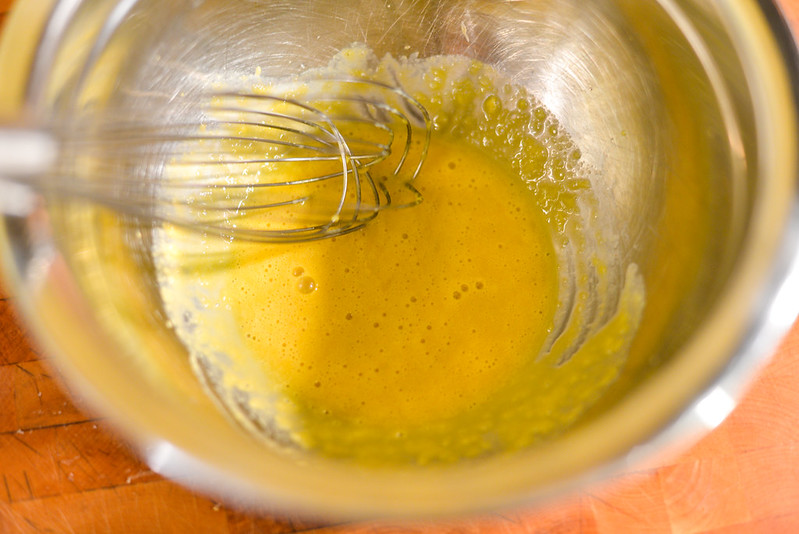 After the potatoes had cooled to room temperature, the next step was to coat them in an aioli. The Il Bambino version has truffle oil in it, but not having a bottle of that on hand, I just stuck with a basic aioli recipe I developed a few years back.

In the eyes of aioli purists, this would be considered more of garlic mayonnaise, since it includes lemon juice and Dijon mustard, but I like the way they enhance the flavor and help stabilize the emulsion. 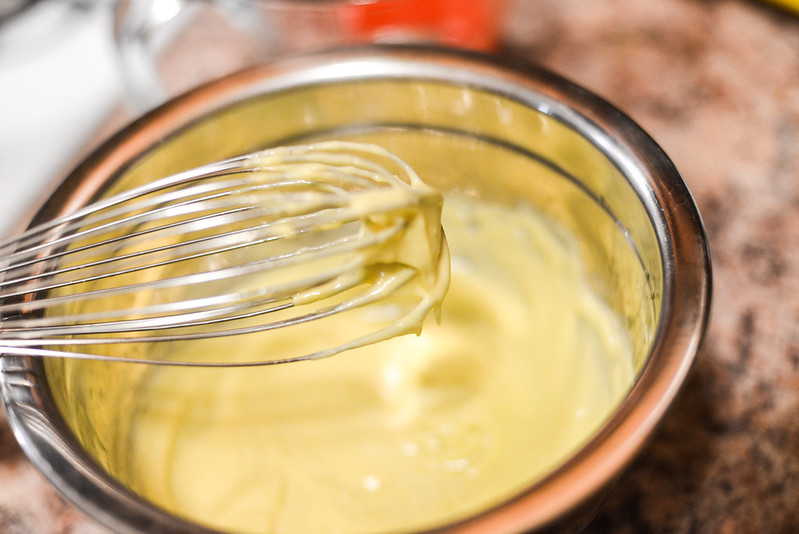 I decided to whip this one up by hand, but regretted not having used the food processor—I would have rather dealt with washing all the pieces of the processor instead of the arm-ache that constant whisking brought on.

When the aioli was done, I transferred the potatoes to a large bowl, added in the mayo, and tossed until the tubers were evenly coated. Then I set them in the fridge to chill completely while making the remaining items. 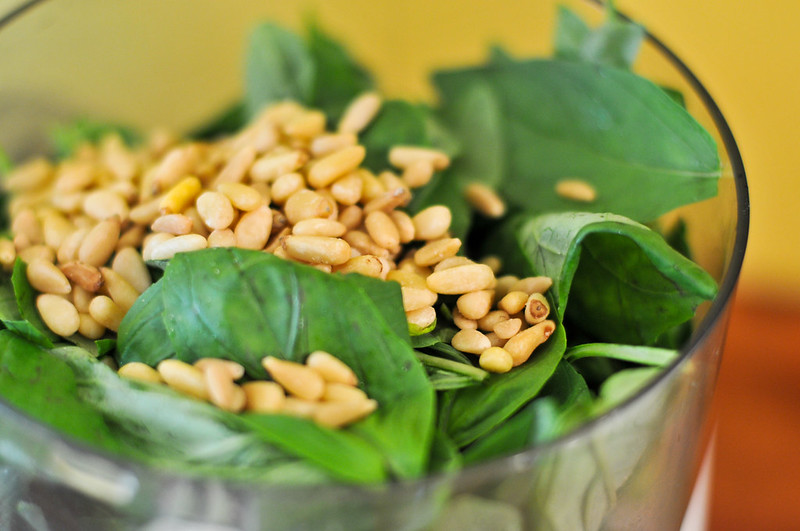 Moving on to the basil pesto, I also had done some work on this front that made this component of the salad quick and easy to put together, along with giving me the assurance that it would turn out pretty stellar. 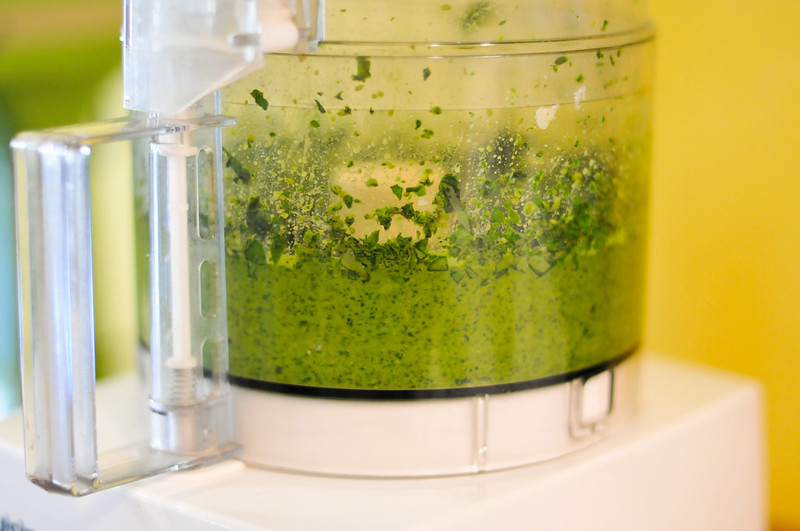 The only change I made to this classic mixture of garlic, basil, pine nuts, Parmesan, and olive oil was to increase the oil to achieve a saucier texture. This was in an attempt to match the more liquid-y pesto of the inspirational dish, which adds an extra creamy texture that both complements and contrasts with the denser aioli. 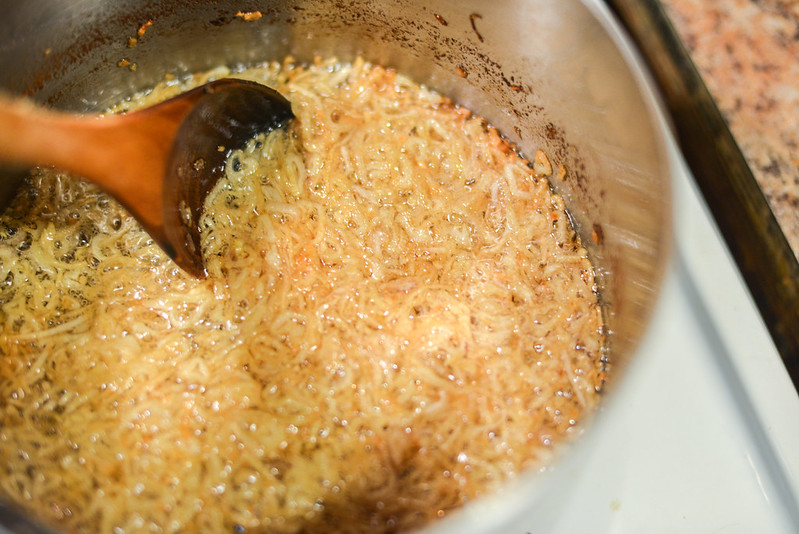 To me, it's the fried shallots that really make the salad—their crunch and balance between sharp and sweet make the whole side feel complete. Fried shallots also happen to be one of my favorite things—try them as a pizza topping and thank me later—so I made more than double what I needed for the salad. 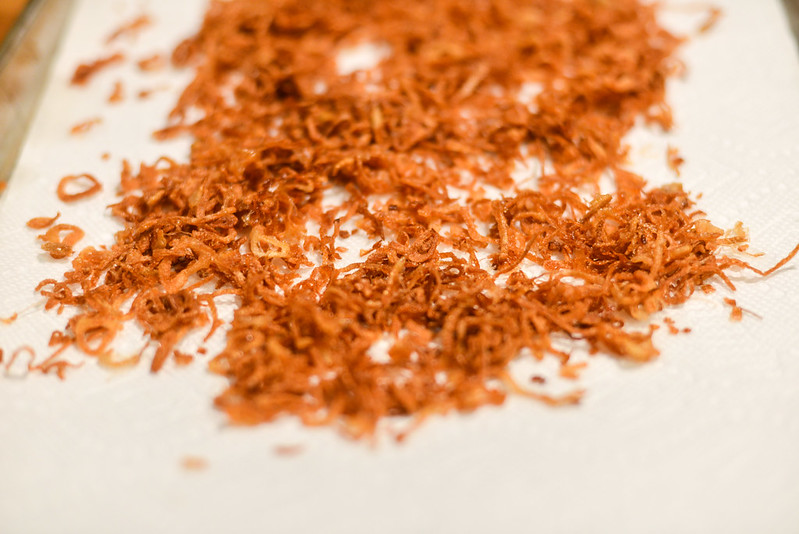 To make them, I combined an equal amount of oil with shallots I had thinly sliced on a mandoline. Then over high heat, I cooked them, stirring constantly, until they turned a light golden brown. Once done, I drained them, sprinkle on a bit of salt, and blotted them dry on paper towels.

This is a pile of fried golden love right here. I seriously ate almost all of the extra ones before the potato salad was even done. 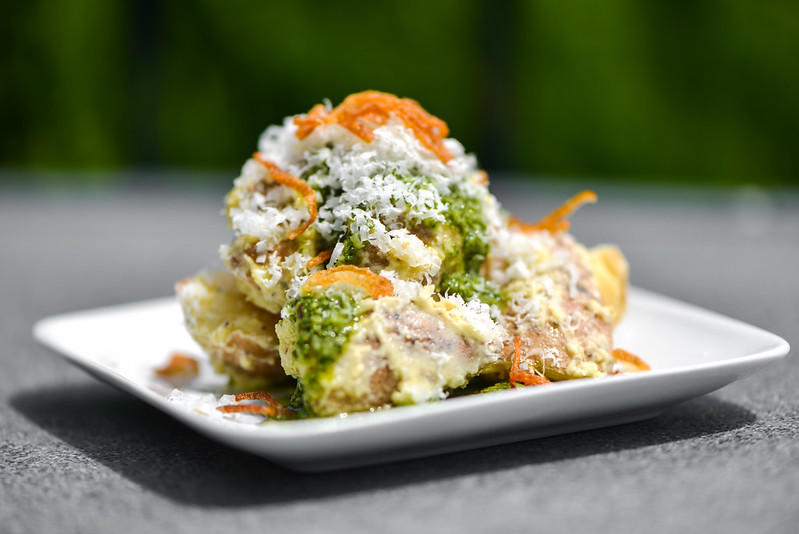 With all the pieces in place, and over a solid hour of work done at this point, it was time to marry everything in one monumental salad. Mimicking the portion served at the restaurant for the photo, I piled potatoes onto a dish. Then I drizzled on the pesto, creating attractive green patches here and there. Next I made sure there were enough shallots on top so each bite will have some. Finally I used my microplane to finely grate a healthy dose of pecorino. 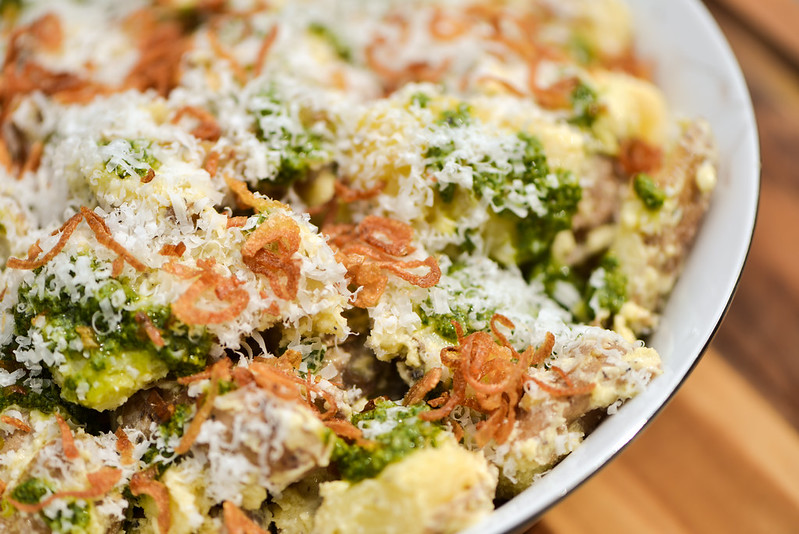 My aim with this salad was to impress new acquaintances and hopefully start gaining some followers that will allow me to start-up the Meatwave down here in Durham with a decent crowd. Luckily I think this did the trick—the salad was quickly portioned out with each burger and sausage and at least a couple guests inquired about this "Meatwave" thing and when it would be happening. 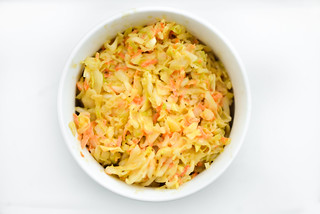