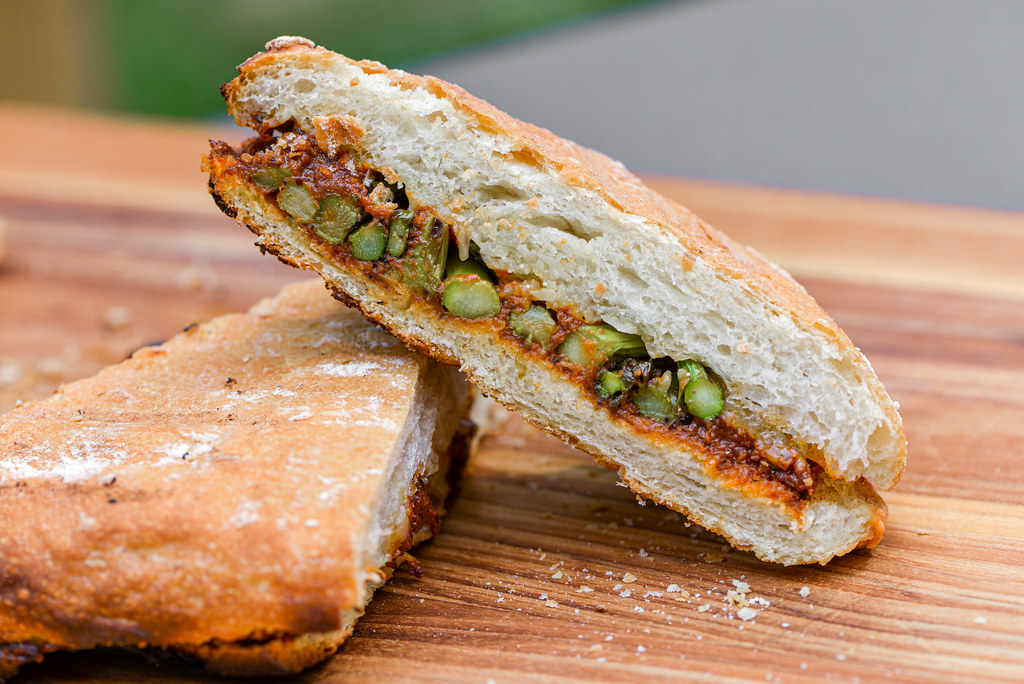 Seeing a plethora of asparagus at low prices is a good bellwether that spring has arrived. Asparagus tends to be my gateway into more greens and lighter eating that comes with the seasonal shift, transitioning me away from the heavier comforts I subside on from fall through winter. Last summer I made this asparagus, romesco, and manchego panini, which was delicious, but definitely had a heartier touch that made it feel out of place in the heat and humidity of mid-summer, but would be very fitting as a winter to spring transition dish, so I held onto this recipe to share at the appropriate time, which has finally arrived. 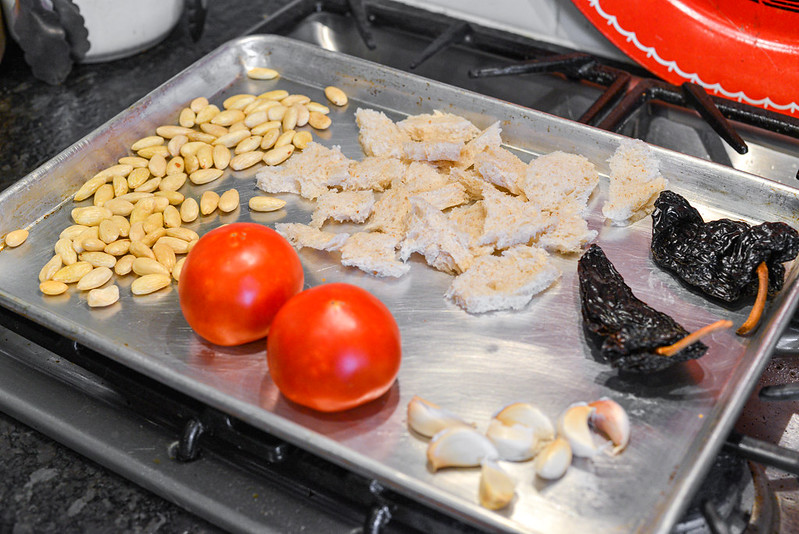 The majority of the effort that went into constructing this panini came from the need to make romesco, which is a tomato-based sauce that has its origins in Catalonia, Spain as a pairing with fish. The base of the sauce is roasted tomatoes with a fair amount of garlic and nuts, of which, almonds, hazelnuts, or pine nuts can be used. Bread is utilized as a thickener and nyora peppers add earthy notes. Not having a source of nyora peppers, I subbed in anchos, which are similarly mild and earthy, with a bit more of a smokiness. All of these ingredients went onto a sheet pan and got roasted in the oven. 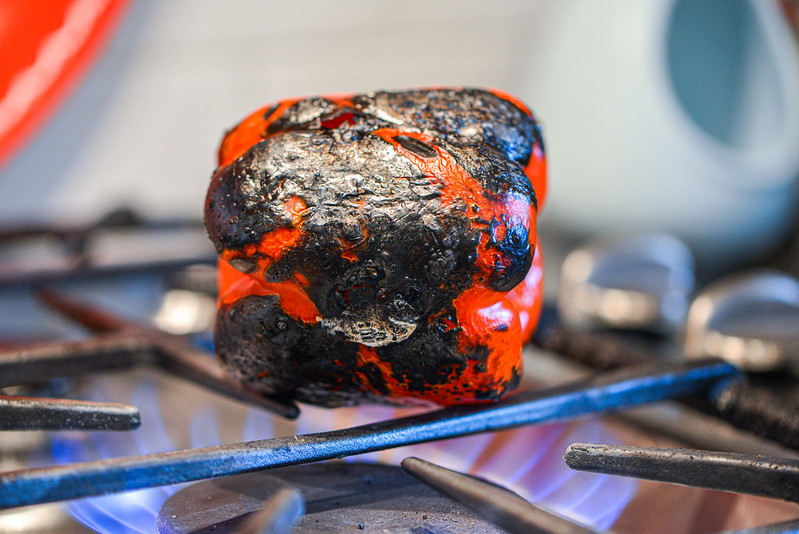 While those were all baking, I also throughly charred a red pepper on the range, then placed it in a bowl and covered to allow it to steam. Once cool enough to handle, I peeled, stemmed, and seeded the pepper. At this point, the almonds, bread, and anchos were all done roasting, so I removed them from the sheet pan and allowed the tomatoes and garlic to continue to cook until done, about 20 minutes later. 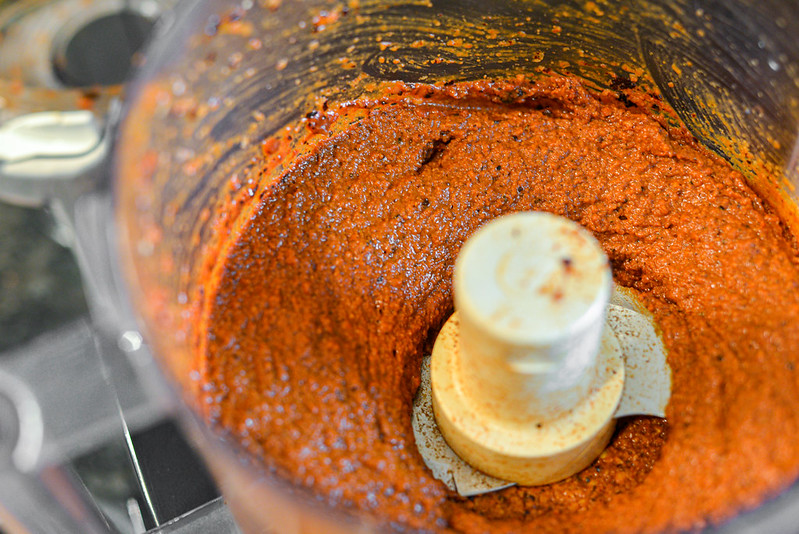 Next, everything went into the food processor, along with the additional seasonings of smoked paprika and sherry vinegar, and I pureed until the mixture was finely chopped. Then, with the motor running, I drizzled in extra-virgin olive oil until I had an emulsified, thick sauce. 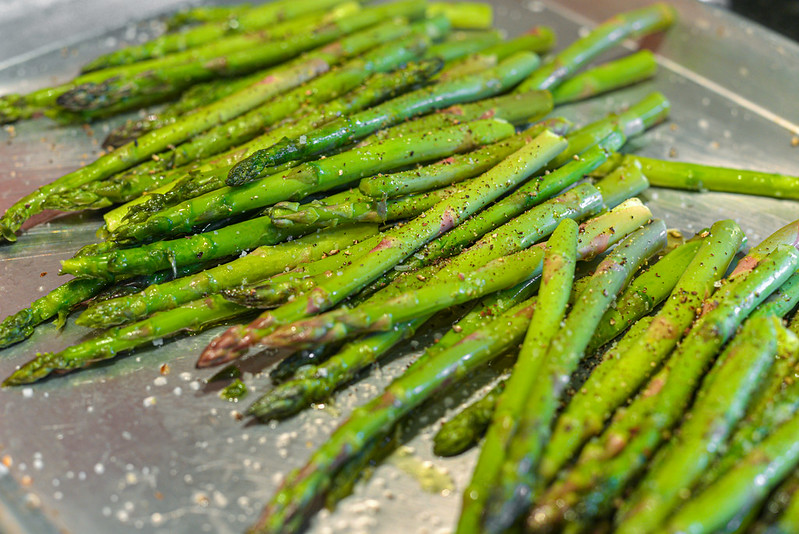 So that was the labor intensive part, the rest of these paninis was a cinch. You may not think of grilling asparagus due to its shape that's apt to fall through the grates, but they do incredibly well cooked over the high heat of charcoal. In order to prep these little stalks for the grill, I merely snapped off the tough ends and then tossed them all with oil, salt, and pepper on a baking sheet. 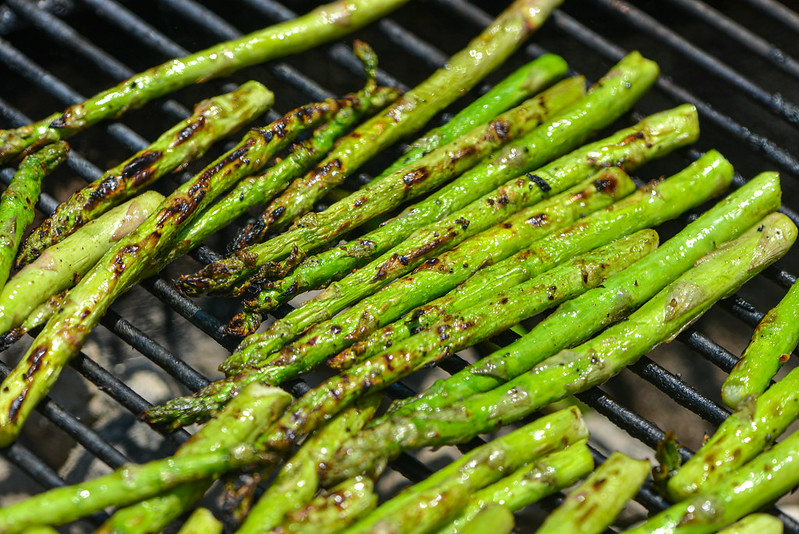 I cooked the asparagus over high, direct heat, which cooked the veggie really quickly. To keep them from falling through, you merely have to arrange them perpendicular to the grates. Even when doing this though, it's not uncommon that one or two might get lost to the fire, but that's just collateral damage to get the rest tasting so great with a nice char and mellow smokiness they pick up from being cooked over a live fire. 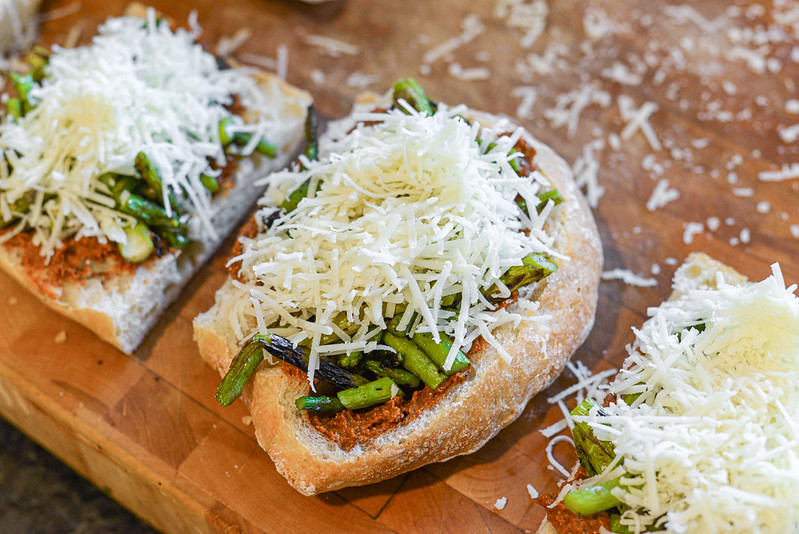 Once the asparagus were done, I transferred them to a cutting board and put my cast iron presses on the grill to heat up. I then chopped the asparagus into roughly one-inch portions and piled them onto ciabatta rolls that I had spread a thick layer of romesco onto. The asparagus then got a hearty helping of manchego cheese on top before going on the grill. 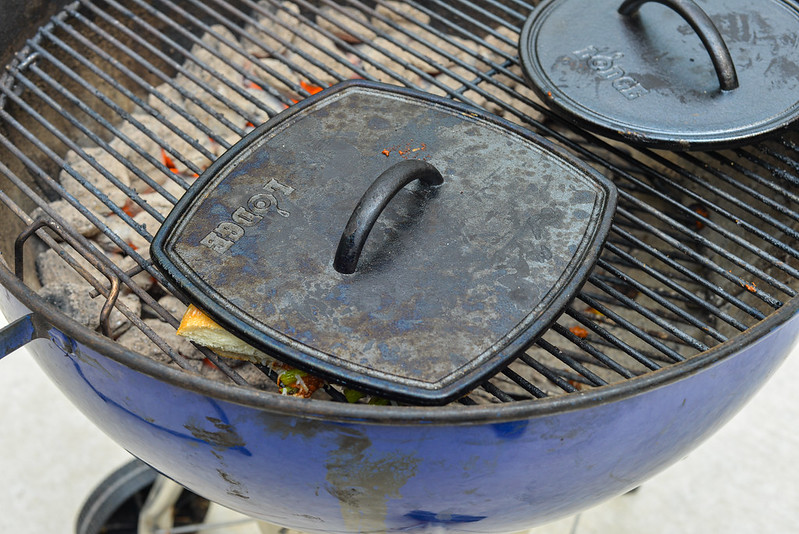 I set the assembled sandwiches on the cool side of a two-zone fire, placed the presses on top, and pushed down to start the panini compression—this was done wearing my welding gloves to protect me from the super hot cast iron. With the grill covered, I let the paninis cook until they compressed a bit further, the cheese was melted, and the bread crisped, which took about five minutes. 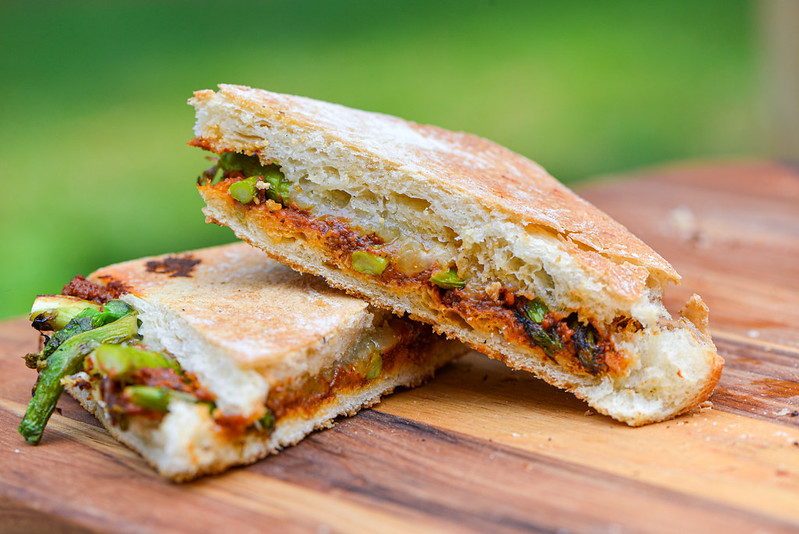 After removing the presses and slicing the paninis into two triangular halves, I snapped some photos and dug in. This sandwich was deceptively light looking, while it actually have a good heartiness to it. A large part of that was thanks to the romesco, which has an amazingly strong and complex flavor that had smoky, fruity, nutty, and tangy notes. Asparagus is also not the lightest flavored vegetable either, which added to the heft here and made it a very apt pairing with the romesco and the sharp and savory manchego. Taken altogether, the panini felt very on point and very much like something I'd take great pleasure in at the outset of spring, getting in some first tastes of the veggie, fruit, and grilling seasons that are all about to come in full force. 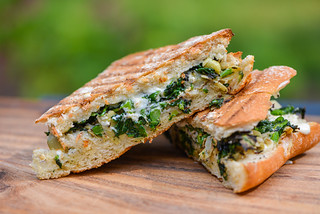