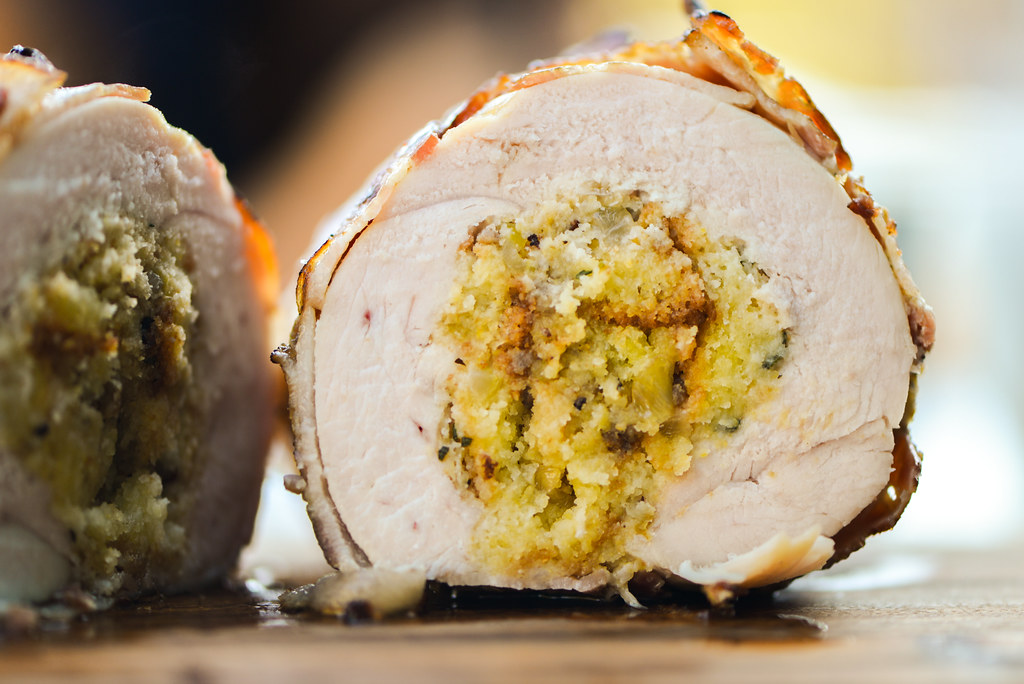 The first Thanksgiving my wife (then girlfriend) spent with my family, her mother asked if she could send us a holiday ham as a gift. My wife was left explaining that it might not be most appropriate present for a Jewish family, thus beginning the tradition of a lovely in-law-provided floral centerpiece on our Thanksgiving table.

Oh, how I wished things went differently, though.

I have an insatiable appetite for ham, and knowing that those flowers could have just as easily been a beautiful, sweet city ham gnaws at me each successive holiday. We've long since given up keeping kosher and I've been waiting for the right time to introduce the idea of a ham instead of a bird. Well, it turned out that last year was finally when it happened. The only problem? The murmur of an absentee turkey didn't elate everyone to the same degree, so I was left trying to find the right scaled-down version of turkey to satisfy everyone at the table.

Given the circumstances, a bacon-wrapped stuffed turkey breast may seem a little counterintuitive, but it hit a lot of the right notes—it was small, brought in the cornbread stuffing that was also going to to go missing, and was pretty much guaranteed to be delicious, and I wasn't left disappointed. 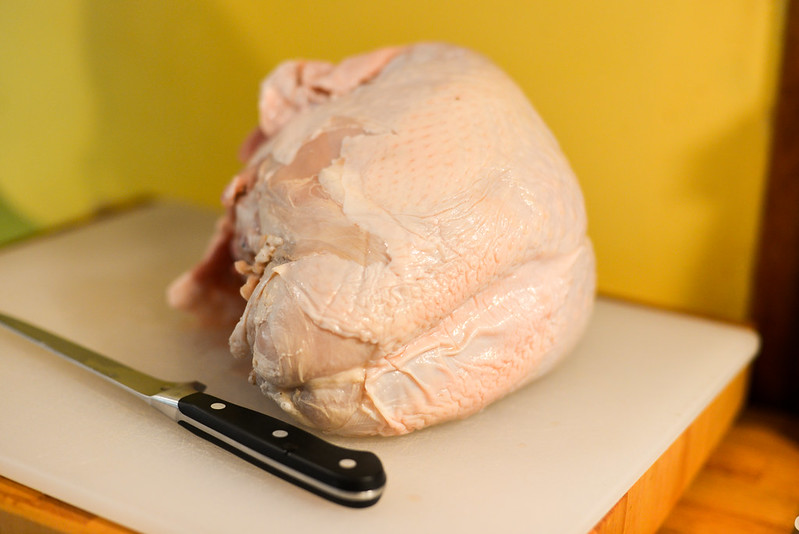 I designed this recipe to be pretty minimal in size, meaning just a single turkey breast was all that I needed to get from start to finish, but since I was cooking this during a Meatwave, where I would have about 15 hungry mouths to feed, I did a double recipe. Instead of getting two boneless, skinless turkey breasts, I opted for a whole bone-in deal, this way I was able to utilize the carcass to make turkey stock for super flavorful gravy later on. 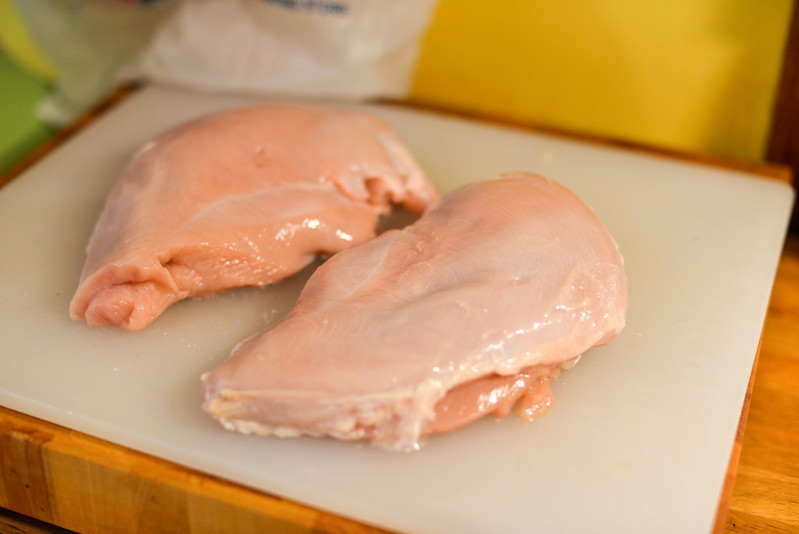 I removed both breasts by first pulling back the skin to expose the meat. Then, using my trusty deboning knife, I cut along the bone to divorce each breast from its carrier. 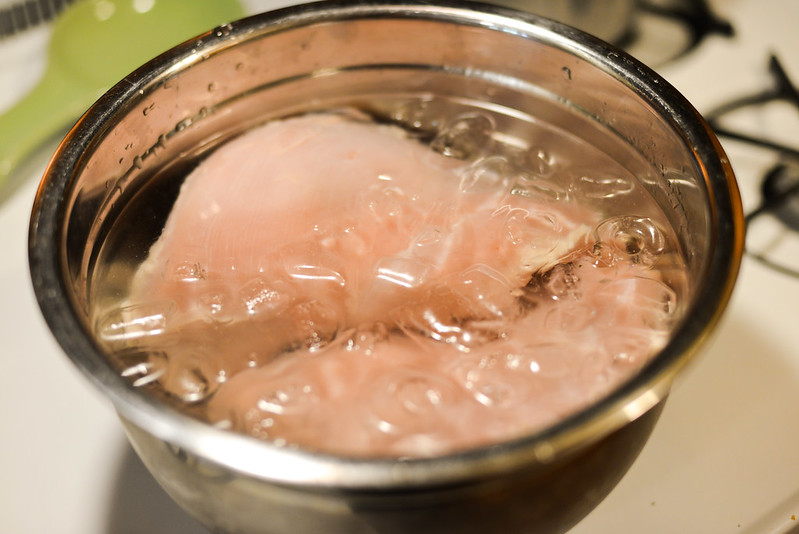 Once off, I decided to brine them to give me added moisture insurance. I didn't do anything fancy here, just salt and sugar dissolved in cold water to make a standard brine that the turkey sat in for one hour. 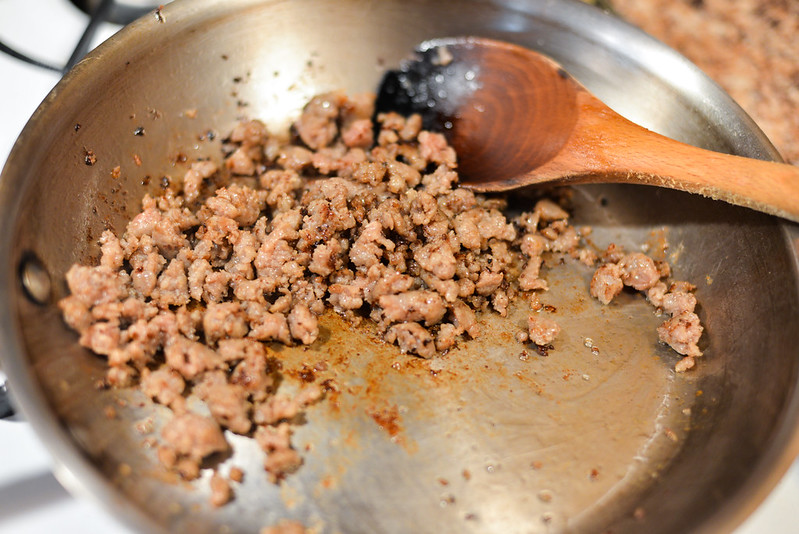 While the turkey brined, I was given ample time to put together the stuffing. This was based off a recipe from Cook's Illustrated that I started using many, many years ago that's so good that I've changed very little in it and have kept using one Thanksgiving after another. It starts with cooking loose breakfast sausage until browned. 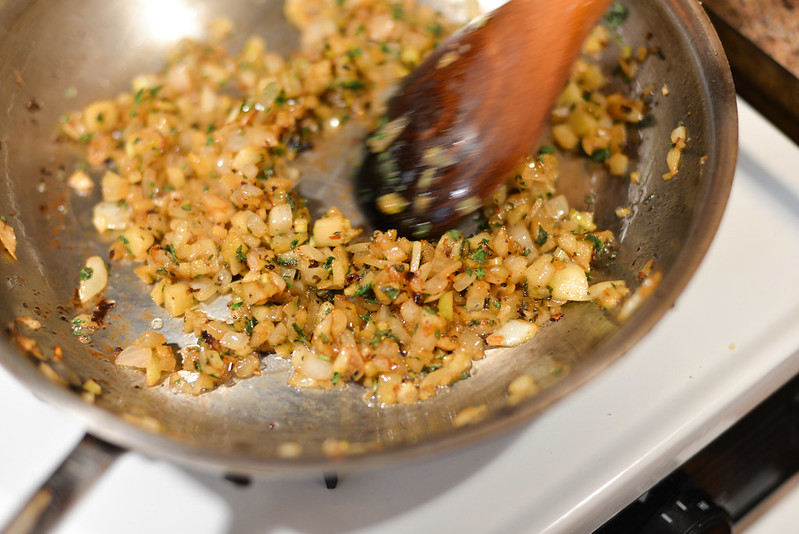 The sausage is cleared to a bowl, then celery and onion are softened in the rendered fat left behind. For something a little different, I added apple into the mix, and once everything was done to my liking, I stirred in the obligatory sage and thyme to add the perfect seasonal herbal touch. 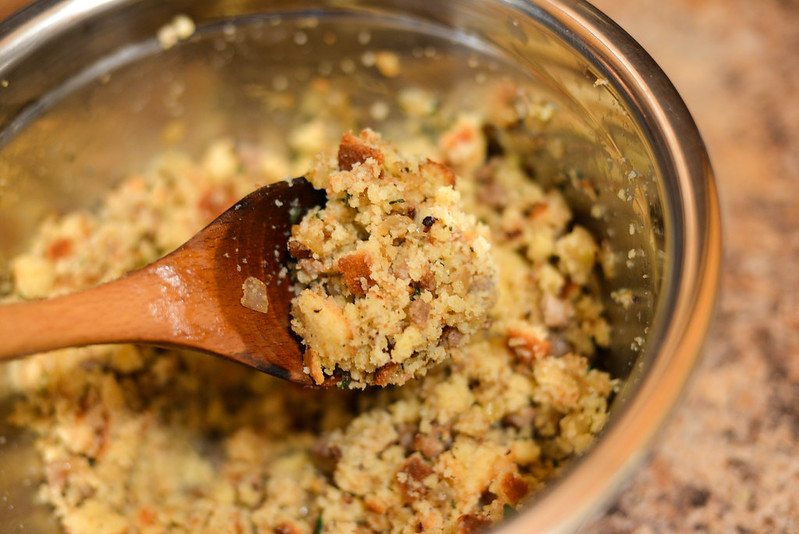 The sausage and veggies are then mix with crumbled cornbread along with chicken stock for added moisture. The original recipe brings half-and-half into the mix, but this was rich and moist enough for the task at hand, so I didn't add any more liquid. 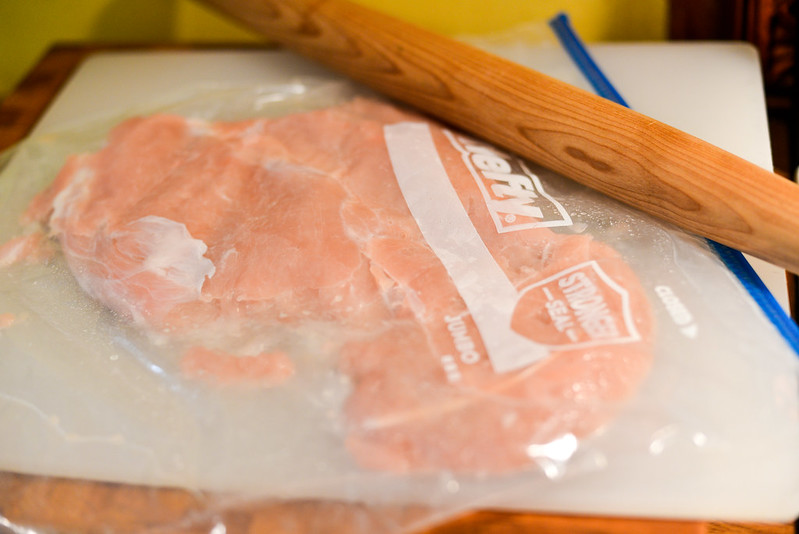 By now the turkey was done brining and I pulled each breast out of its salty bath, patted them dry, and then bashed them good. I wanted to flatten out the breasts to make them more even in shape and increase surface area, so I placed them, one at a time, in a Ziploc bag and used my rolling pin to beat them into submission. By the end, I had two even rectangles of turkey. 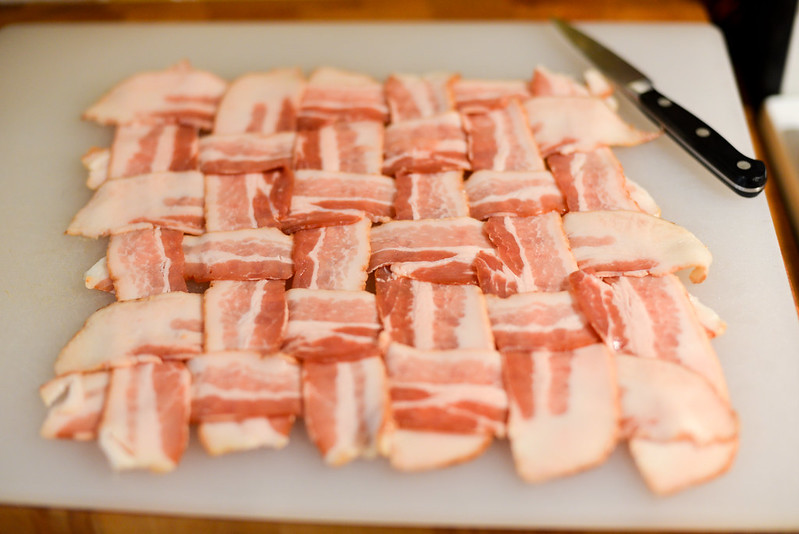 It may come as some surprise, but this was the first time I implemented the bacon weave in my home. Of course I've gotten the emails and forwards of all these crazy bacon-encased meats, but always thought of them as kind of gimmicky. In this one particular case though, it seemed to make perfect sense.

First, the bacon would help protect the exterior of the turkey, helping prevent dryness. Second, the bacon would add a ton of flavor that would give a great salty, smoky touch to balance the sweet cornbread and enhance the turkey. Third, the weave is more sturdy than wrapping single pieces alone, so it seemed as if it was meant to be. 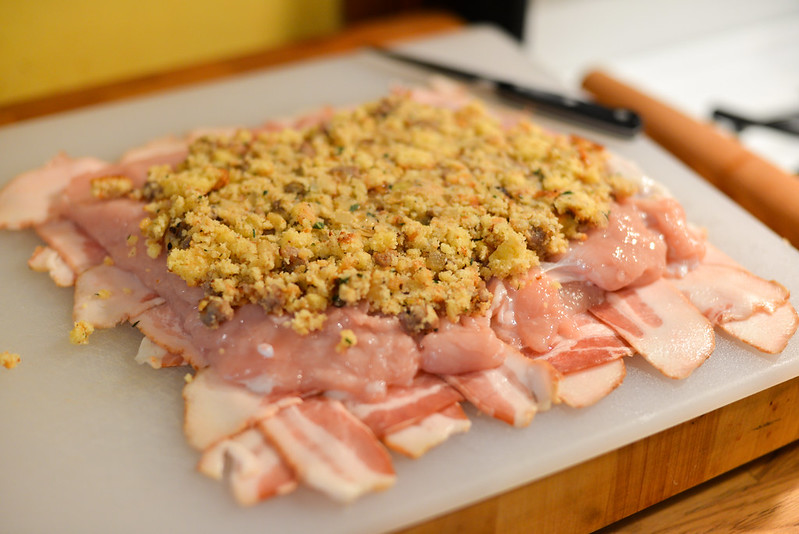 I proceeded to rest one turkey breast on that beautiful streaky bacon, then spread on a layer of cornbread stuffing, leaving about 1/2 an inch of room around the edges to avoid overstuffing. I then rolled the whole thing up and this amazing cylinder of meat was born. 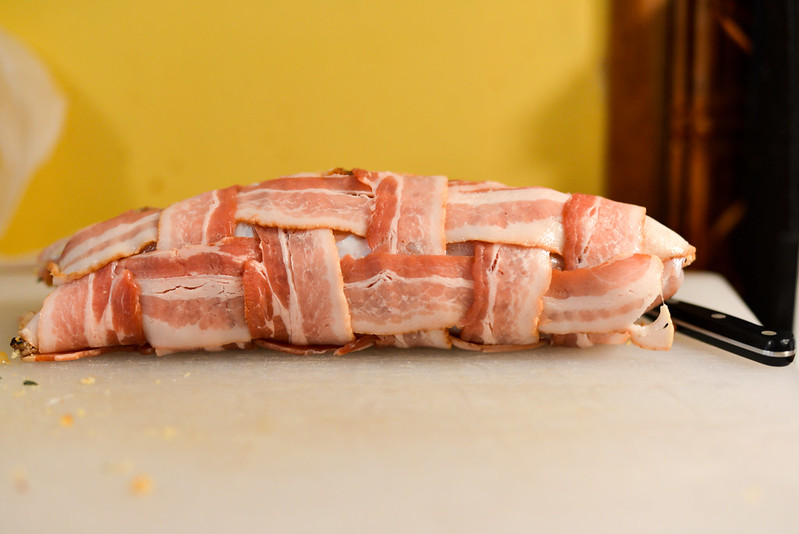 For a stuffed and rolled piece of meat, it was pretty damn sturdy. So much so that I thought I could get away with not tying it as long as I kept the seam side down during the first part of the cooking. 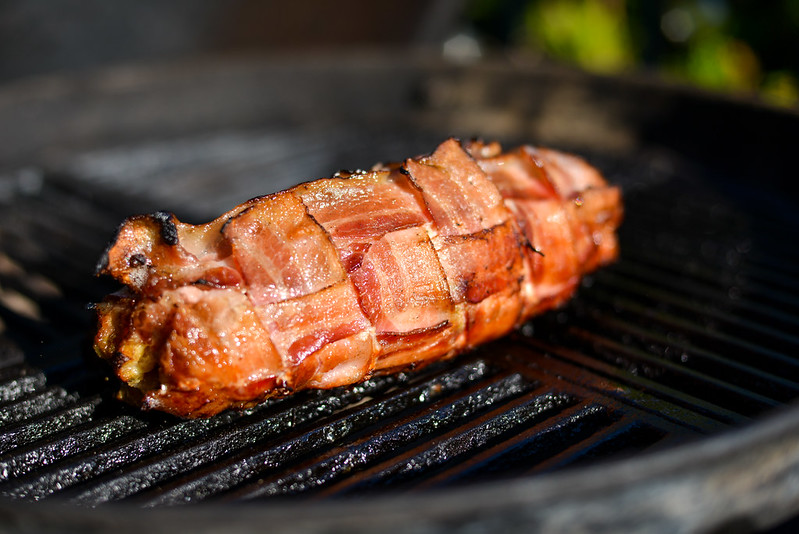 I roasted my bacon-turkey-stuffing creation over indirect heat until the meat hit 150°F. As I had hoped, once the roll had cooked long enough to set, I didn't have to worry about it falling apart at all, and maneuvering it on the grill was done with ease. 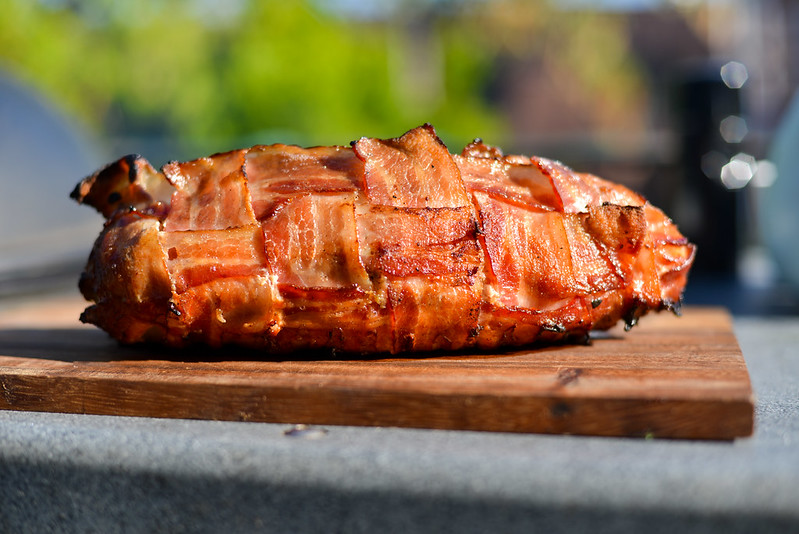 The bacon had colored pretty well over the indirect cook, but I did move it quickly over direct heat to give it a little extra crispness. This left the final roll looking like this—isn't it a sight for sore eye? 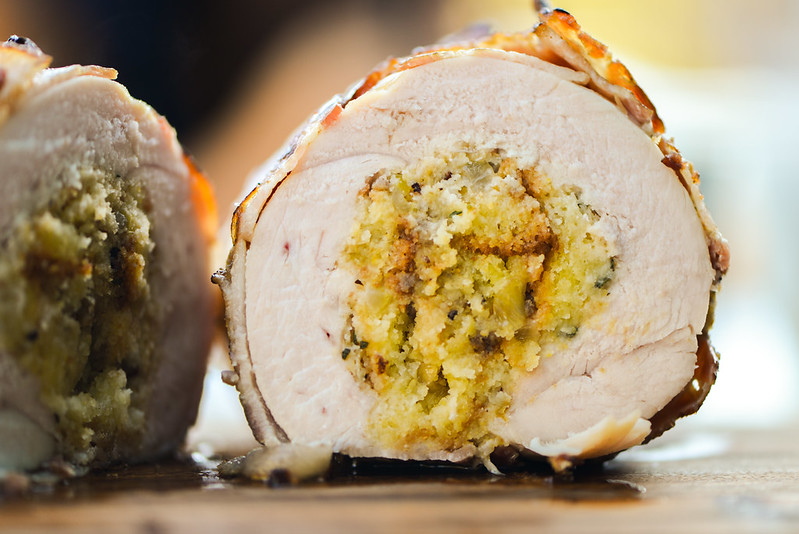 This turkey breast was more than just the sum of its parts. The meat was juicy throughout, but most of the flavor was a mix between the sweet-and-savory cornbread stuffing and smoky bacon. It was a natural pairing, and one that managed to evoke Thanksgiving traditions of the past while presenting them a new, enticing way. Ultimately I didn't end up making this on our actual Thanksgiving because I was too eager to give turkey porchetta a try, but it certainly covered a lot of holiday bases in a compact form, accomplishing everything I set out do. 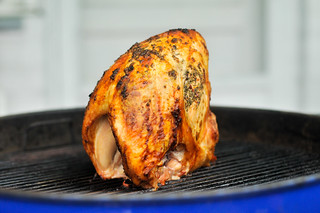