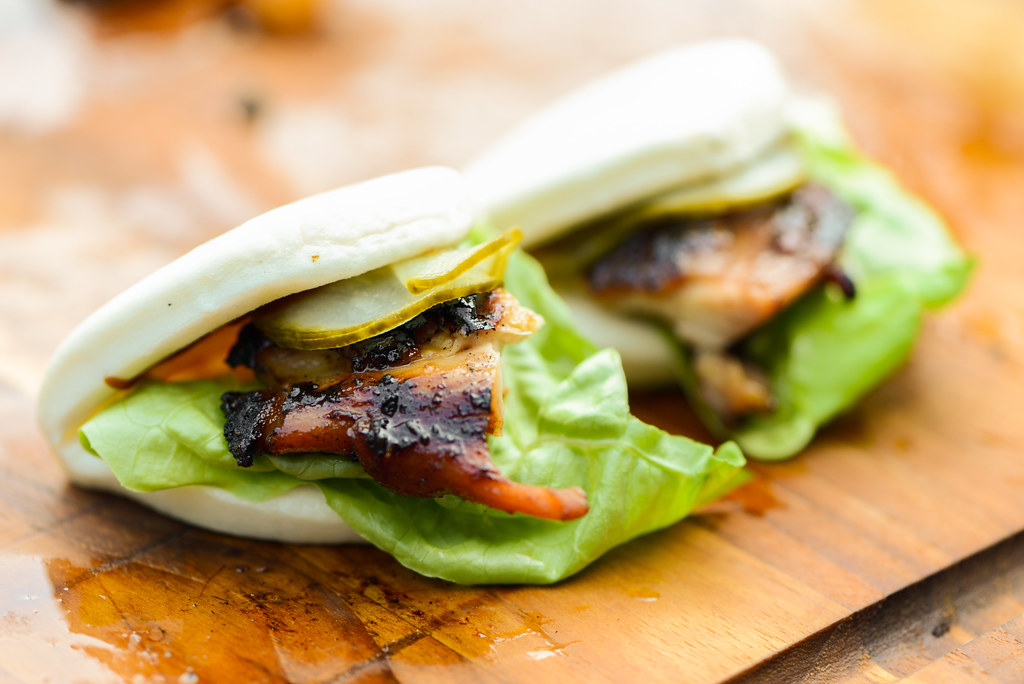 It's time to make the seasonal pivot from holiday roasts for large family meals to finger foods for the New Years and remainder of football season. For me, this is truly the most magical time of year because party foods just happens to be my favorite culinary genre—I can eat the likes of wings, jalapeño poppers, potato skins, and more until the end of time. One item fitting squarely into that category that I love to order but have never cooked is steamed buns. It doesn't seem to matter what form of roasted or grilled meat that gets sandwiches between these soft Chinese buns, they always seems to hit the spot and their ability to consume easily with one hand in a couple bites make them perfect party fodder. To take my first shot at some great steamed buns, I started with a tried and true char siu recipe applied to chicken that was grilled, sliced, and finished with crisp lettuce, tart pickles, and a slather of sweet hoisin sauce. 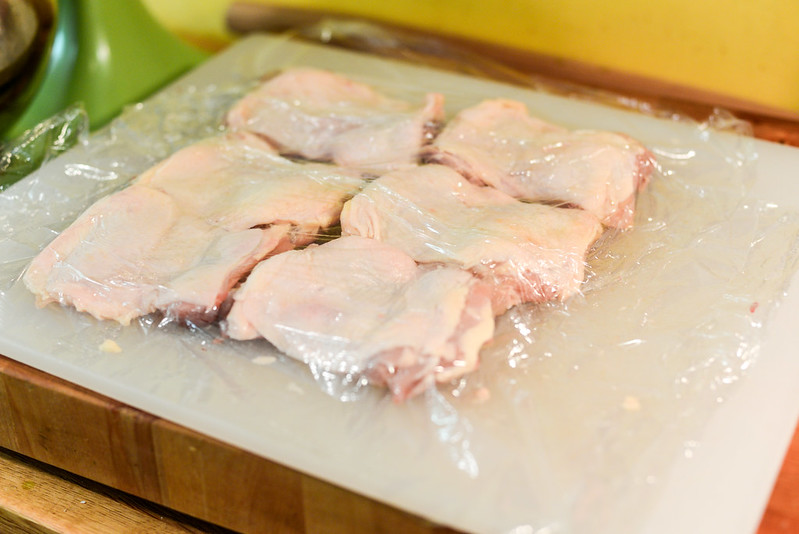 To start this off, I needed some boneless chicken and when I want that chicken to be as good as it can be, I always opt for thighs over the leaner and rather flavorless breasts. I decided to also go with skin on boneless thighs because there's a ton of flavor in that skin and I was hoping to get it a little crisp over the high heat of the grill for a nice textural addition to the final bun. 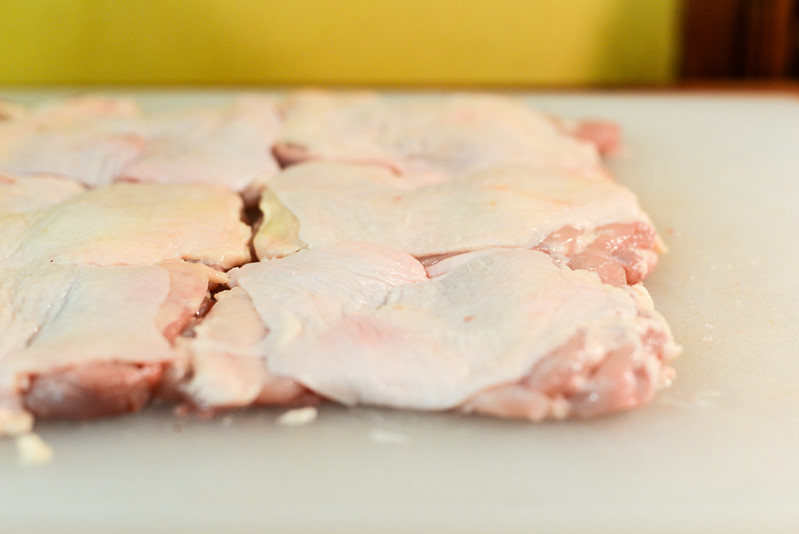 When I got my chicken home, I had to first correct one of its failings—evenness. For the most even cooking and to maximize the size of the thighs—I wanted to be able to get four one and a half inch square piece out of each thigh—I covered them plastic wrap and then bashed them into submission with rolling pin until they were evenly flattened to about a half-inch thickness. 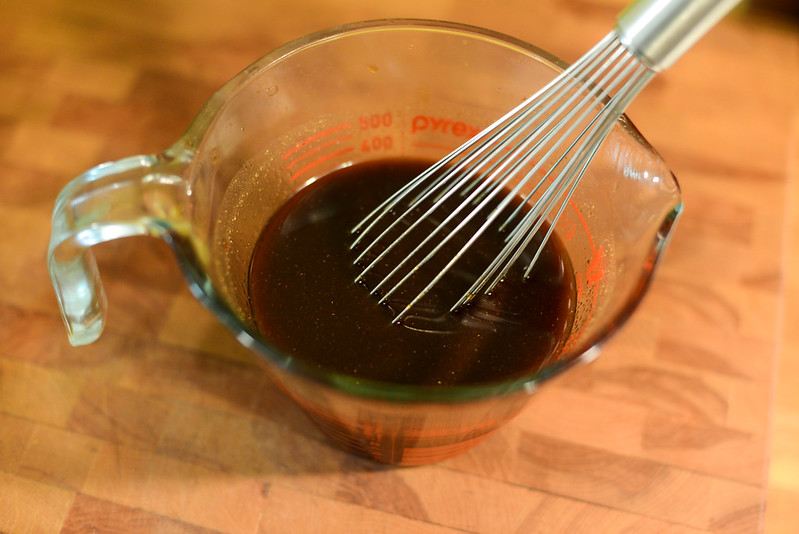 I then whipped up a char siu sauce to act as a marinade. For those not familiar with char siu, if you've ever had any type of Chinese barbecue—ribs, roast pork, etc.—there's a good chance it was coated in a char siu sauce. Char siu is made by merely whisking together hoisin, honey, soy sauce, sherry, and five spice powder which forms into a very distinct sweet, earthy, and savory sauce. 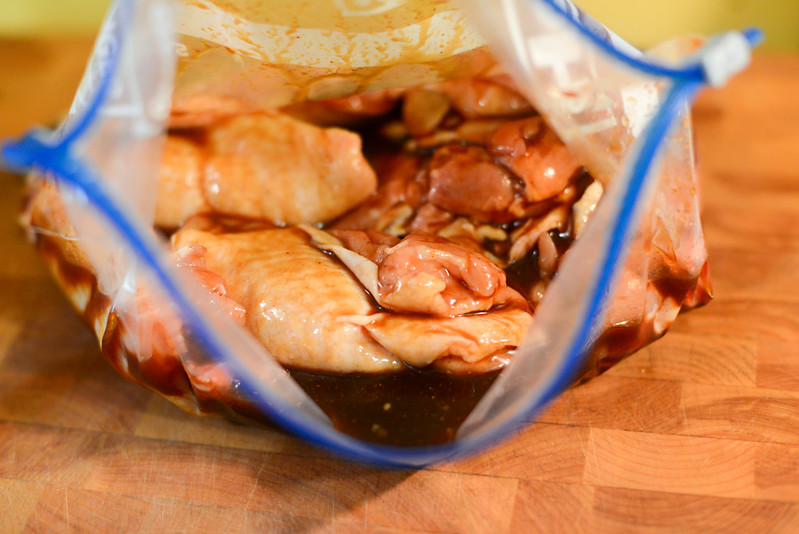 I placed the thighs into a gallon sized Ziploc bag, poured in the sauce, sealed, and placed in the fridge to marinate. Because this isn't a high acid marinade, the chicken can safely swim in the sweet char siu for some time without ill effects. I let mine marinate overnight, although if you needed things done faster, about four hours would suffice. 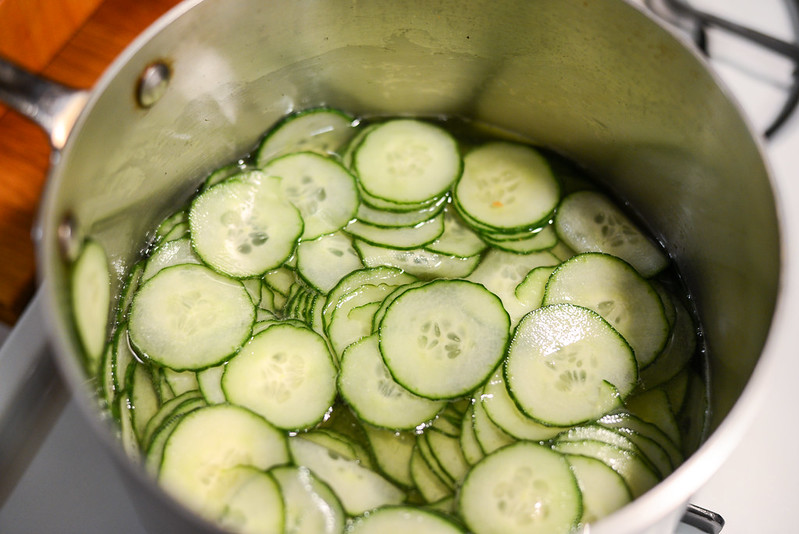 A steamed bun is only as good as the combination of ingredients put inside it. So to balance out the sweetness of the char siu and additional hoisin I was planning on using, I needed an appropriate contrast, which I found via quick pickles. I got the process to make these from Serious Eats and they were pretty fast and simple to put together. 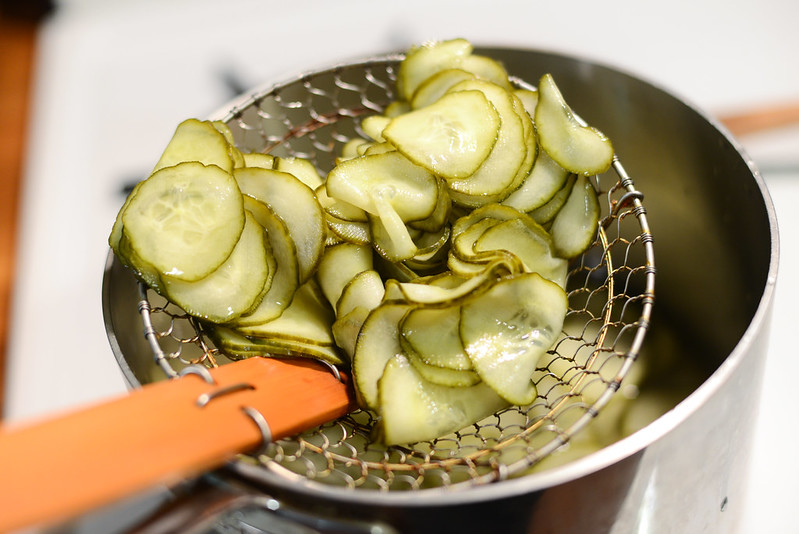 After slicing one seedless cucumber into very thin slices on my mandoline, I submerged the slices into a mixture rice vinegar, water, sugar, and salt I had brought to a boil briefly right before. I then placed a few paper towels on top that soaked up liquid and forced the cucumber slices to remain submerged in the liquid. After ten minutes in the brine, the pickles were ready to be strained and used. These can be kept in the fridge for up to a month if submerged in a bit of the brine. 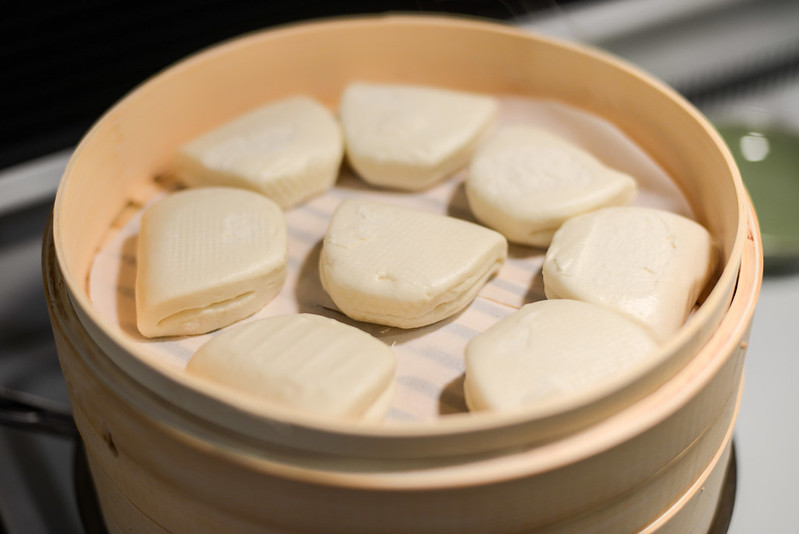 Because I was expecting the chicken to cook up in no time, I wanted to get my buns steamed and ready to go before I did the grilling. I didn't try to get fancy and make these Chinese buns myself, just picked up a few packages from the Asian mega-mart, then all I had to do was set up my steamer and let them steam for a few minutes until they were soft and pliable. If you're minus a steamer, they can also be microwaved quickly under a damp towel as well. 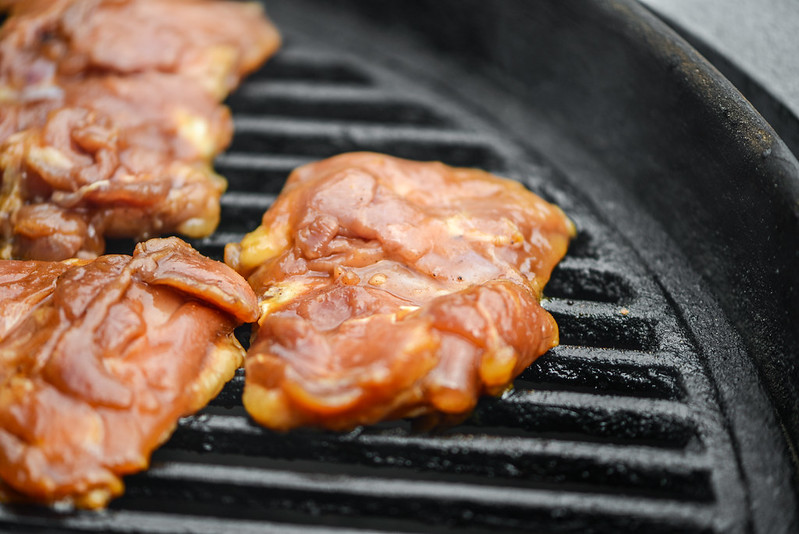 Out of the marinade, the chicken thighs had that tell-tale earthy orange hue of char siu sauce. I started them skin-side down over direct heat and let them cook until the thighs developed some nice charring. 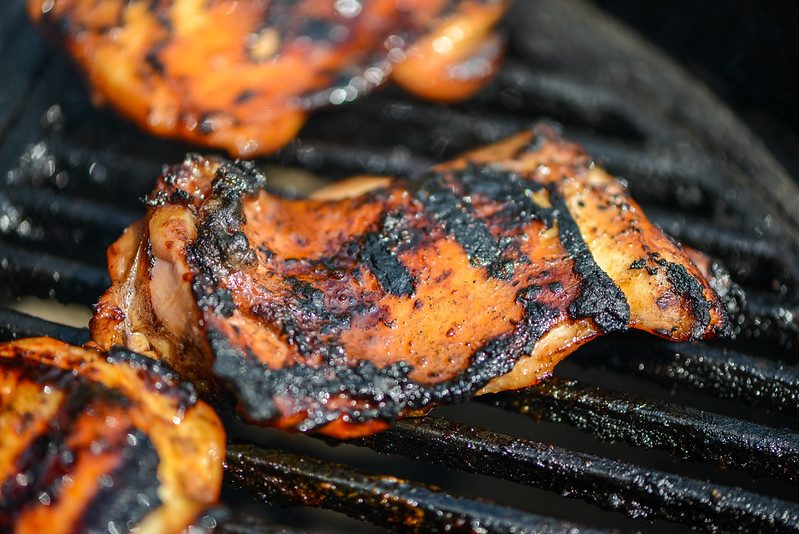 When I flipped them, they looked damn beautiful. The skin was crispy in some spots and the sauce had caramelized nicely. It only took a few minutes on each side until they were cooked through, at which time I transferred them to a cutting board to rest for a few minutes. 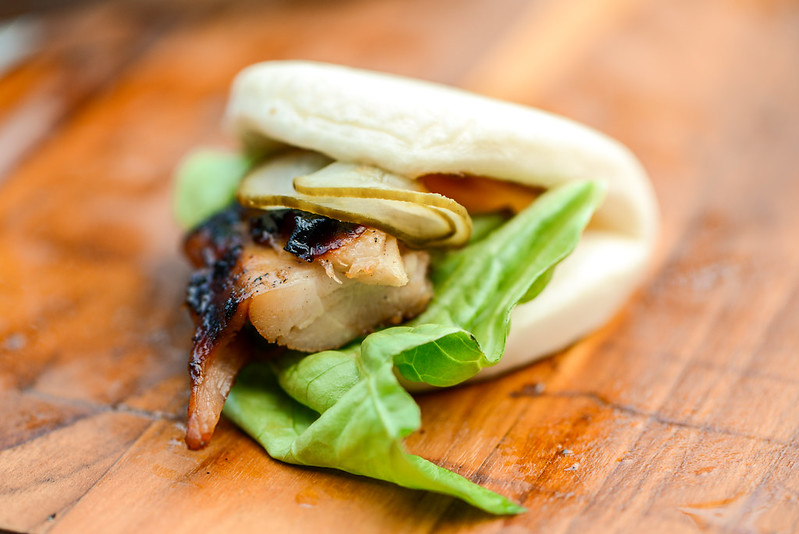 I then sliced each thigh into four even pieces and placed each in a bun with a bit of torn Bibb lettuce, a couple pickles, and a slather of hoisin. The end result was a pretty stellar steamed bun. The chicken was juicy and had a great sweet and savory flavor from the char siu sauce. The lettuce added a freshness and light crunch while the pickles brought a note of contrasting sourness that was welcomed when matched against the additional sugary spread of hoisin. They made for an excellent couple of bites and have gotten me super excited for this finger-foods season that's sure to be filled with a lot more equally awesome things.