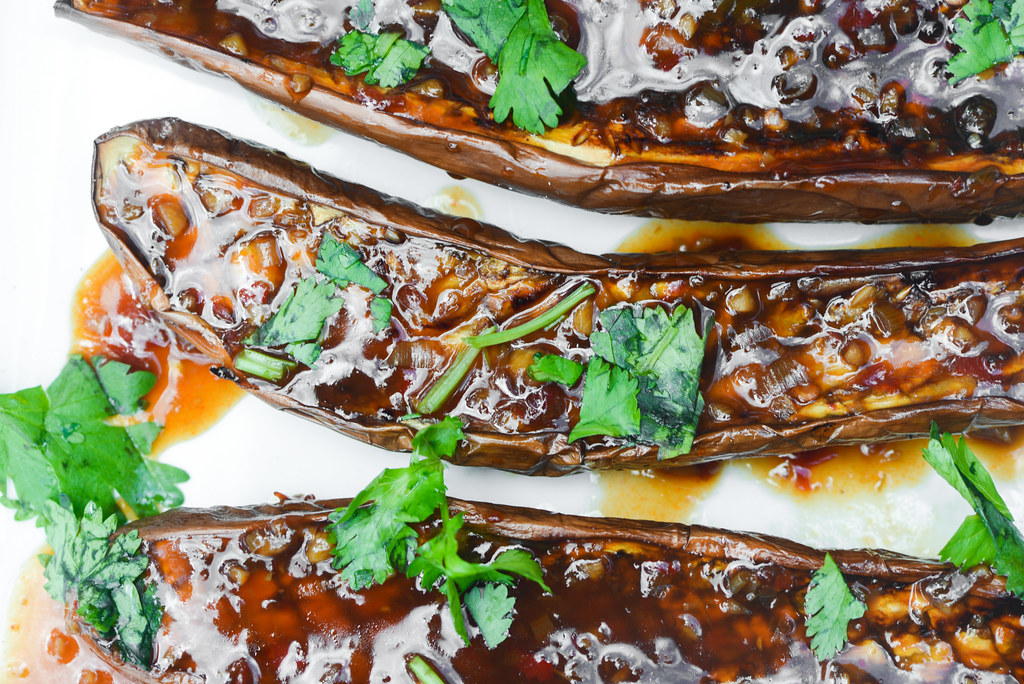 I've never been too keen on Chinese eggplant dishes where the thick, syrupy sauce fuses with the overly softened eggplant to create a kind of overall mushy experience that isn't quite for my personal palate. I tried to make this type of eggplant a couple times in my early days of recipe development to see if I could do anything more appetizing to me, but never got results I was all that happy with. Then, while researching ideas for a Chinese-influenced Meatwave, I came across a few recipes for eggplant with yu xiang sauce and the looks of that tangy and spicy Sichuan sauce seemed like something I could really get behind. So I took another stab at an eggplant-plus-sauce type of recipe, and this time I was left absolutely smitten. 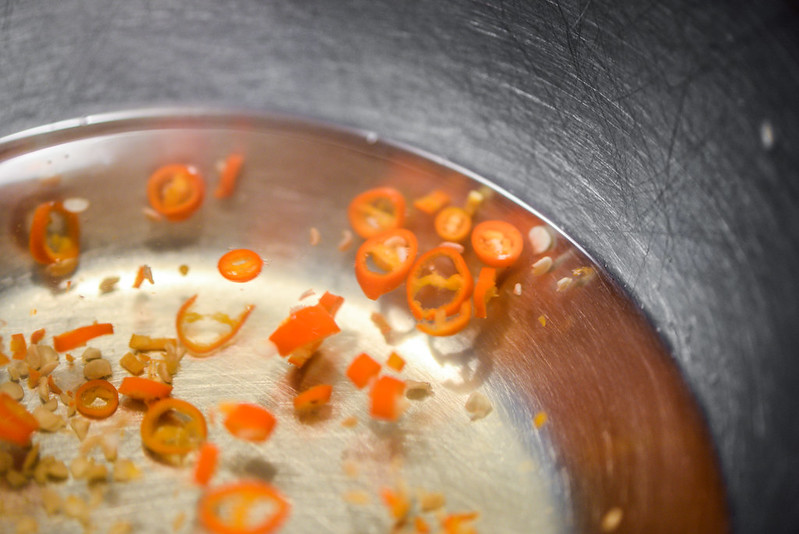 Yu xiang directly translates to "fish fragrance," but there's no fish in the sauce and it's also not commonly used on seafood. So I'm not quite sure where the name came from, but did know the sauce typically has some pickled hot peppers in it, so took a cue from Kenji's recipe and made my own tangy and spicy peppers by soaking Thai chilies in hot vinegar. Once well infused, I whisked in Chinkiang vinegar, Shaoxing wine, sugar, soy sauce, and cornstarch. 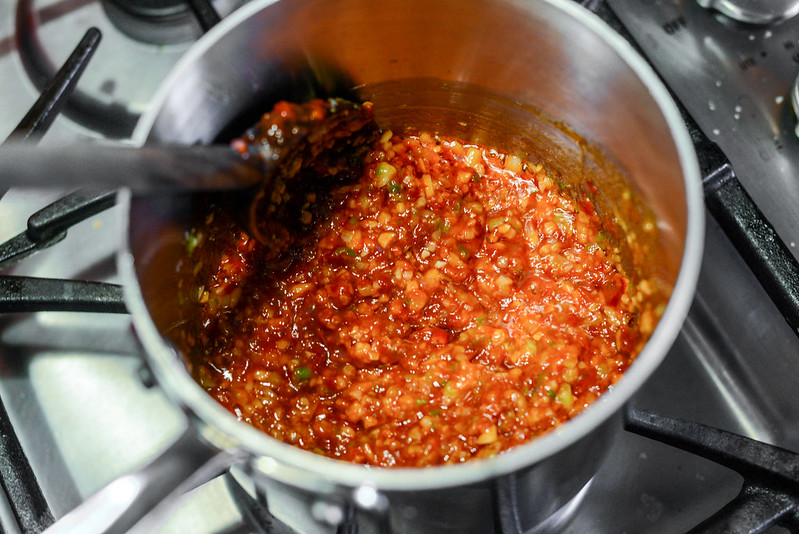 Next I sautéed scallions, ginger, and garlic until fragrant and then added in Doubanjiang—a Sichuan chili broad bean paste. This is one of those ingredients that's pretty essential to have to get the right flavor, but once you pick it up, it'll last a long time and be on hand in the pantry, making more Sichuan recipes that much easier. 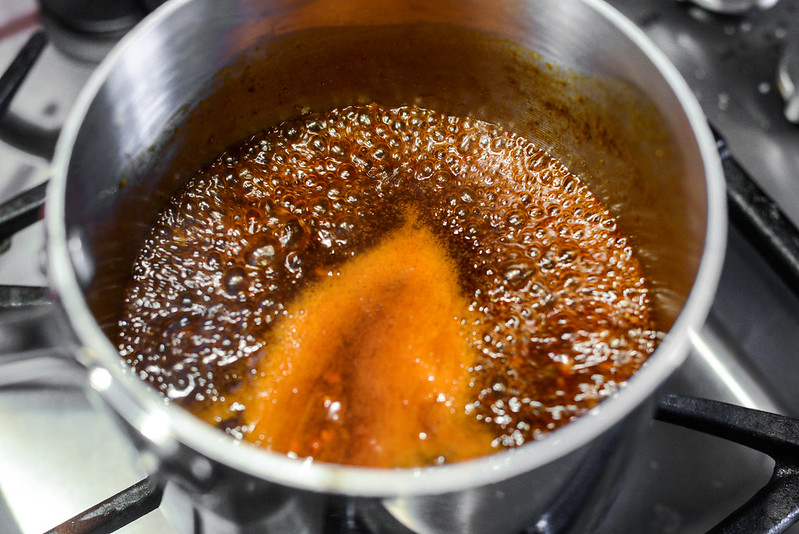 I then poured the vinegar and chili mixture in with the veggies and bean paste and brought to a boil. I was looking to thicken the sauce to a syrupy consistancy, which, thanks to the cornstarch, only took about a minute once the sauce really began bubbling. 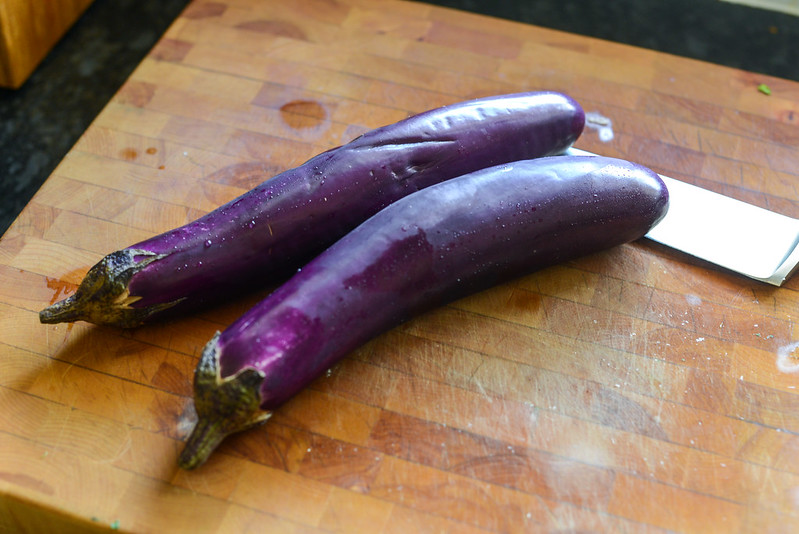 While I haven't been a lover of a lot of Chinese eggplant dishes in the past, I don't dislike the medium as a whole. In fact, thinly sliced and grilled eggplant is a go-to of mine—the softened eggplant is perfect for stuffing and rolling closed to make a wide arrange of really tasty treats. The problem mostly comes when the eggplant is thicker or bigger, bringing more of that mushy consistancy that feels what I assume baby food must be like. 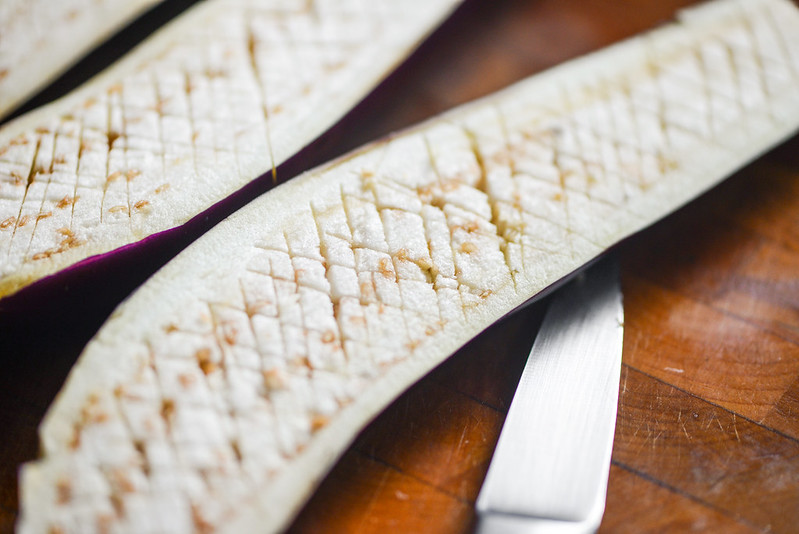 In an attempt to achieve both a soft interior and lightly crisp exterior, I decided to score the flesh. My hope was to create little crevasses that that sauce could later creep into, while leaving some of the charred surface in tact to add extra texture beyond the tender innards alone. 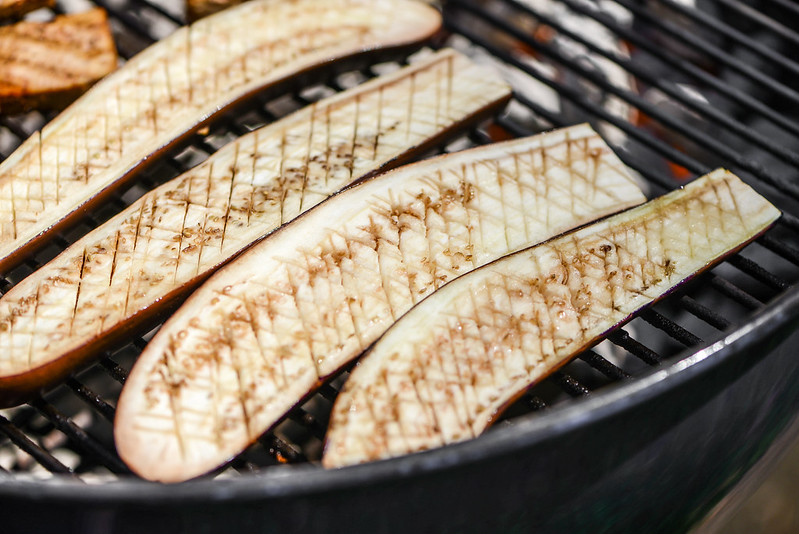 Then to get that balance of some crisp with the soft, I first roasted the eggplant over indirect heat until it was tender, but not super mushy—which took about ten minutes total to achieve. 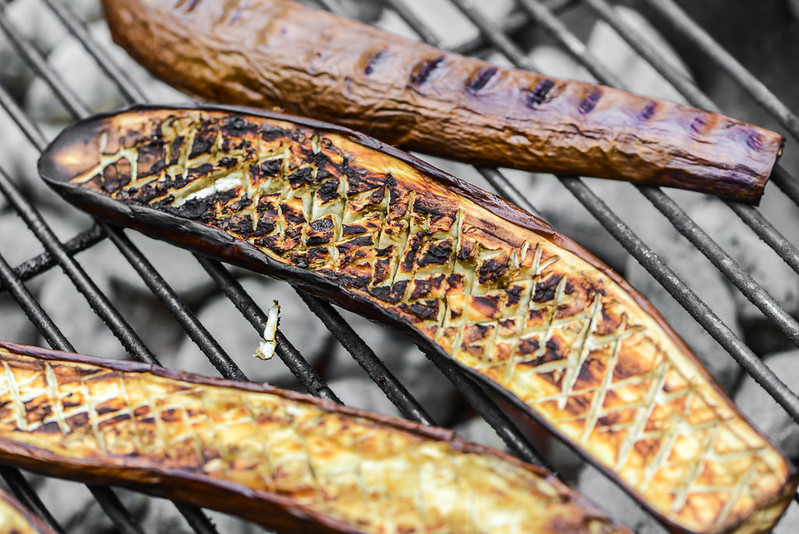 Then I flipped the slices over and moved them to direct heat to get some nice browning and charring to the exposed flesh. Since a lot of moisture had already been expelled from the eggplant from the roasting stage, this happened in just a couple minutes, and by the looks of it, I had seemingly gotten what I set out to accomplish with the cooking. 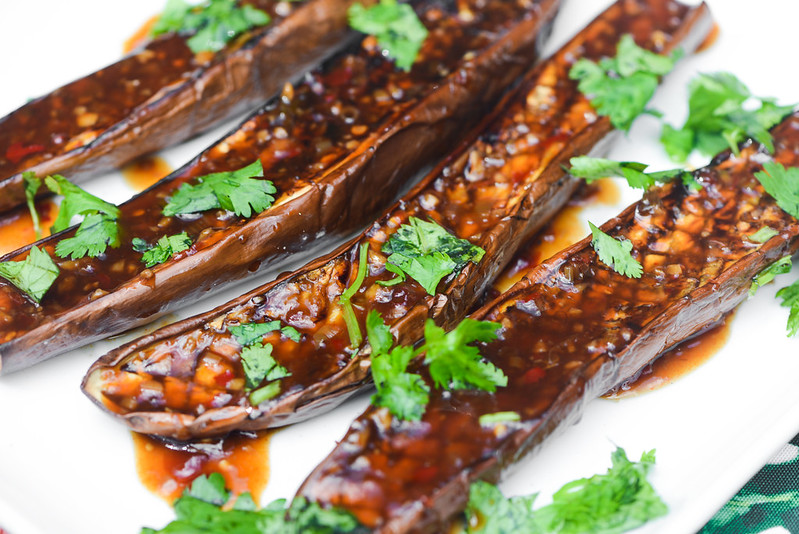 I spooned on the sauce next and garnished with cilantro before serving. Even though I thought I would love this, I was still a little skeptical at first given past less-than-awesome experiences with similar dishes. I was totally sold though on the first bite. Yes the eggplant was a little soft and mushy, but it also had enough other texture to distract my focus from that. Also, that didn't matter much because that tender flesh melded with the insanely flavorful and delicious yu xiang—which was totally in my wheelhouse. First off, it was pretty spicy, and that's always a selling point for me, but there was also so much depth to it thanks in large part to the doubanjiang and layers of savory tanginess created by the vinegars, wine, and soy sauce. Each bite was just another excuse to get more of that sauce, and before I knew it, all the eggplant was gone and I was left wanting more. Now that's not something I've said of just about every other Chinese eggplant dish I've had in the past. 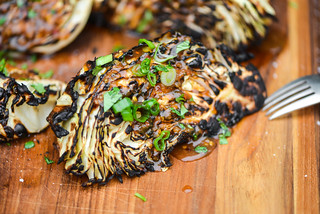