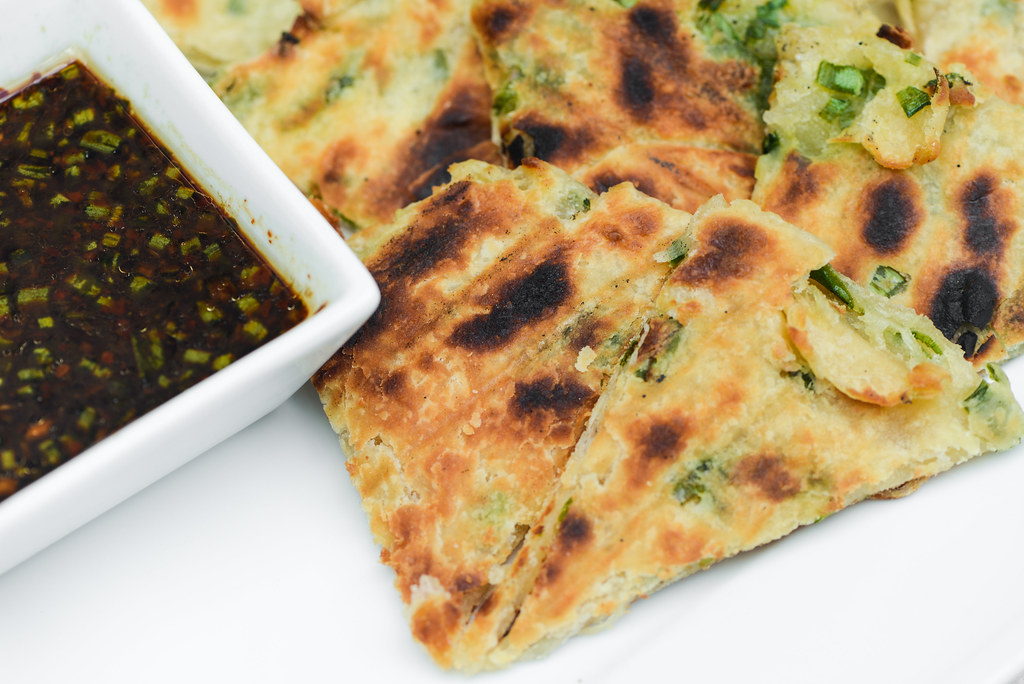 One day last fall I got up from working, only realizing that it was now well into the evening and my intent focus had left me hungry and with little energy to either go out or make anything elaborate for dinner. Well, making anything was kind of a moot point as there was little in the house, but after scouring the shelves, I found that the few ingredients required for scallion pancakes were available—flour, water, scallions, and sesame oil. I had never made these crisp Chinese bread appetizers/snacks before, but I love ordering them and knew I'd be pretty assured of making great ones if I followed the recipe by Kenji on Serious Eats. So I did just that and came out with some of the best scallion pancakes I've had, and ever since that fateful night, they've become a regular part of my repertoire, so much so that I figured I should bring them to a grill to help round out the menu at a recent Meatwave. 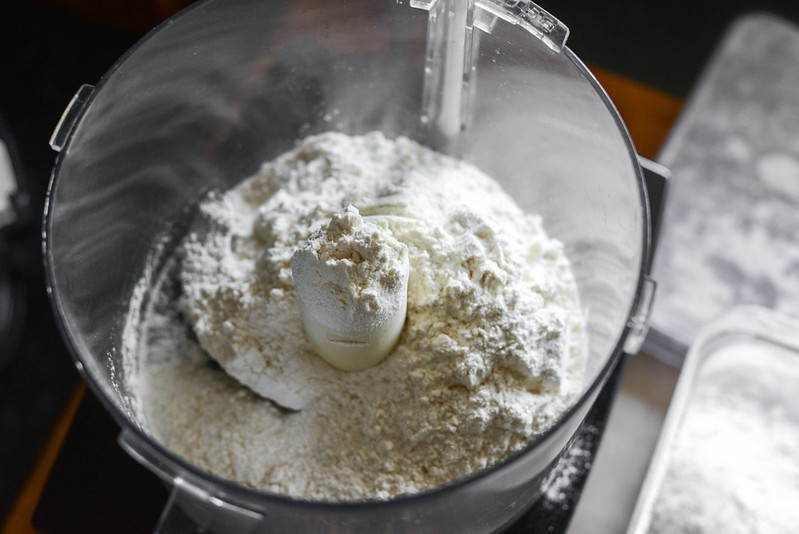 Once you have the process down, scallion pancakes are incredibly simple to make, but that procedure can sound daunting on paper, so I figured it would be good to walk through every single step so you can see what it looks like. It starts with a food processor, which makes quick work of bringing the dough together. 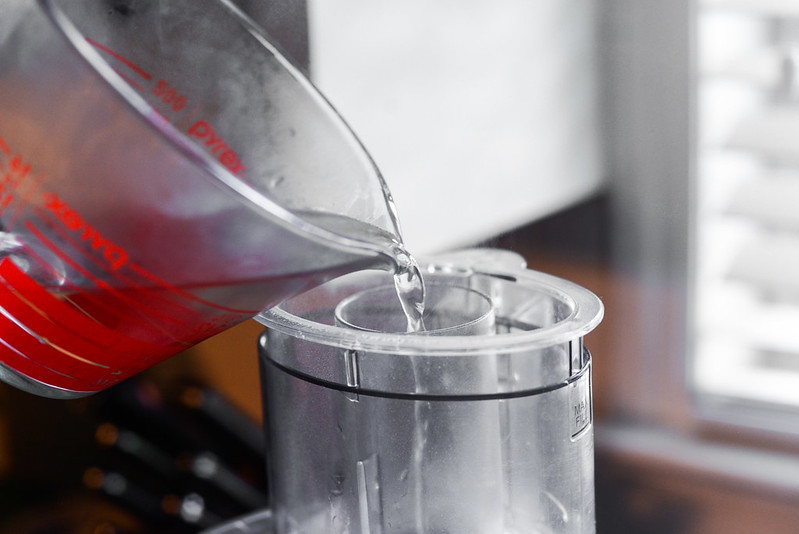 It's just a couple cups of all-purpose flour, then a cup of boiling water that's drizzled in while the motor is running. 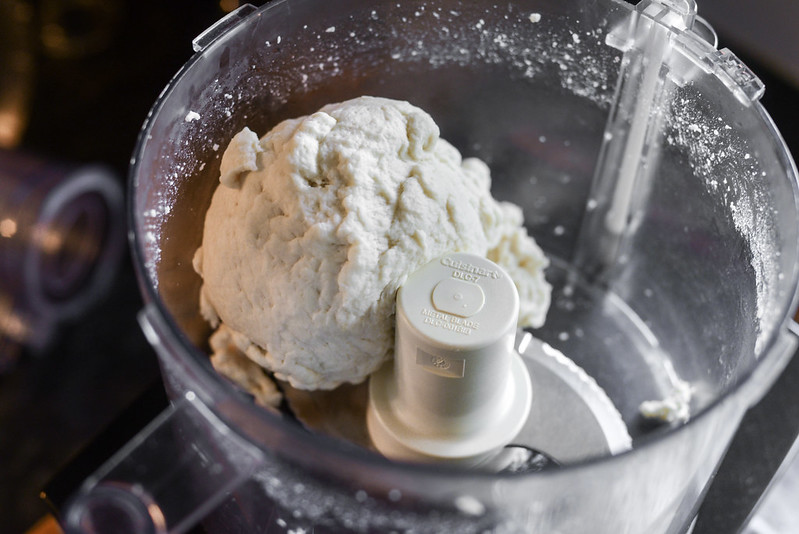 After about 15 seconds of processing, you should get a cohesive ball like this. If hasn't come together, you can add a tablespoon of water at a time and continue to process until it does, although the equation of two cups flour to one cup water has yet to fail me on any attempt. 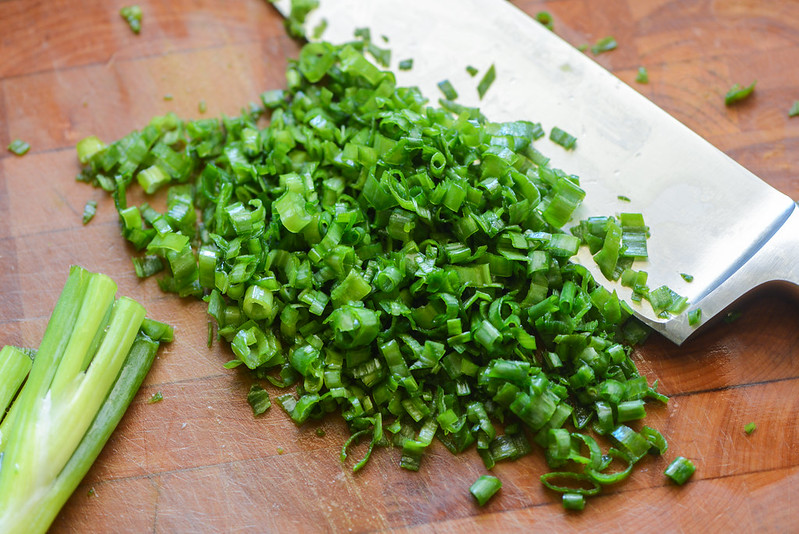 Then the dough has to rest for a half hour prior to proceeding, but this downtime is utilized for slicing up the scallions—you need a lot—and making the dipping sauce. 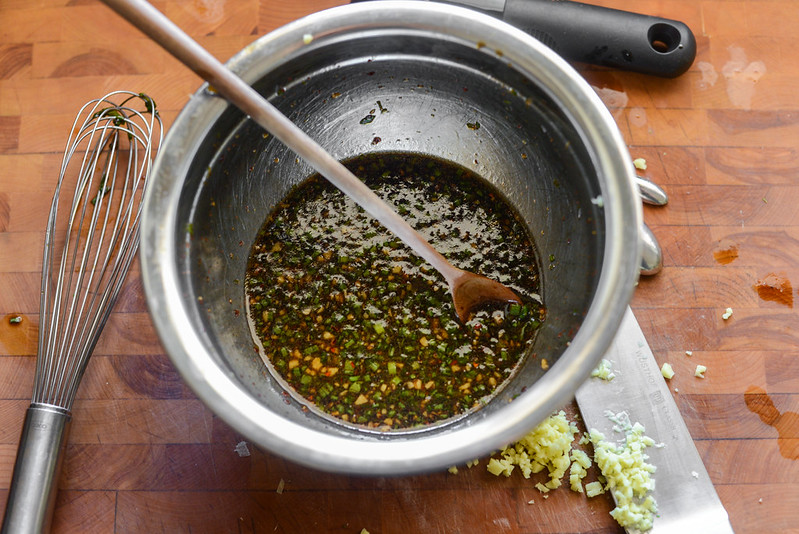 I did change up the dipping sauce from the inspirational recipe, putting together something with a little more balance between sweet and salty with a touch heat, which I think pairs really well with the pancakes. To make it, I used soy sauce and vinegar as a base, ginger for a bit of bite, honey for sweetness, red pepper flakes for heat, along with sesame oil and sliced scallions. 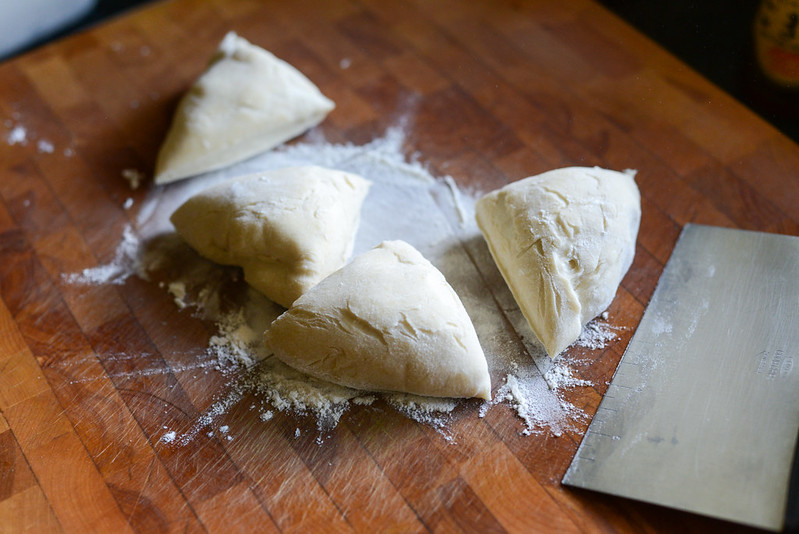 After the rest, the first step is to cut the dough into four equal pieces and roll each of those into a small ball. 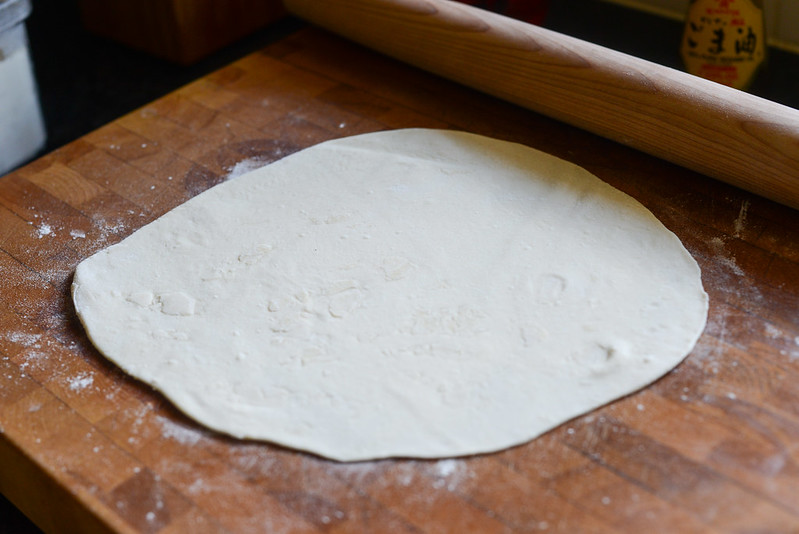 Then you do the first roll out, flattening one ball of dough into an eight-inch disk. 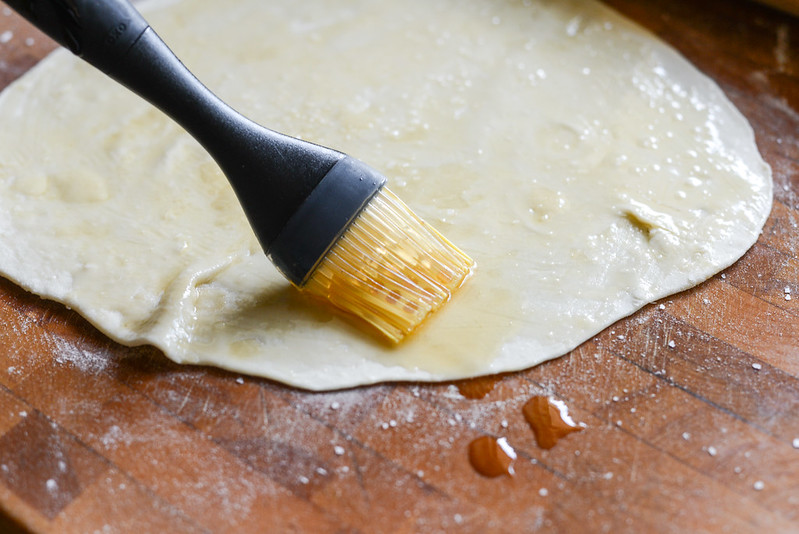 Next you paint an even layer of sesame oil across the entire surface of the dough and sprinkle on salt to taste. 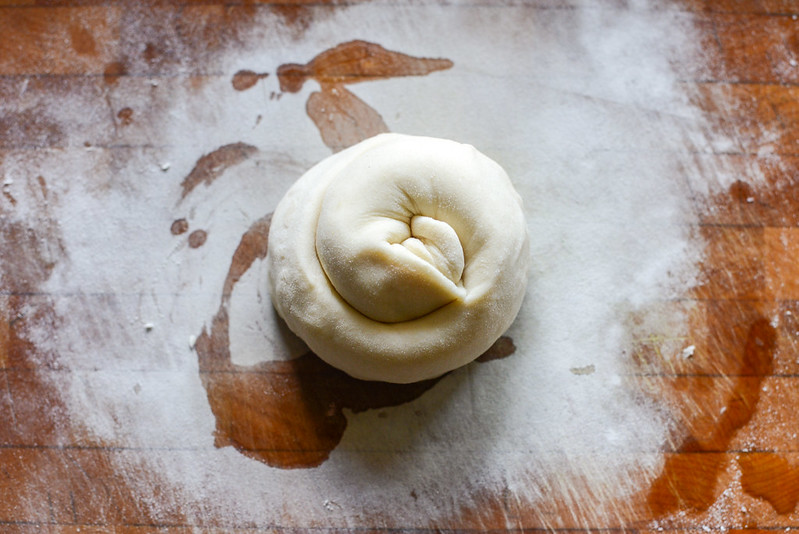 Then, starting from one end, the dough is rolled closed like a jelly roll, followed by forming that roll into a spiral, tucking the end of it underneath. 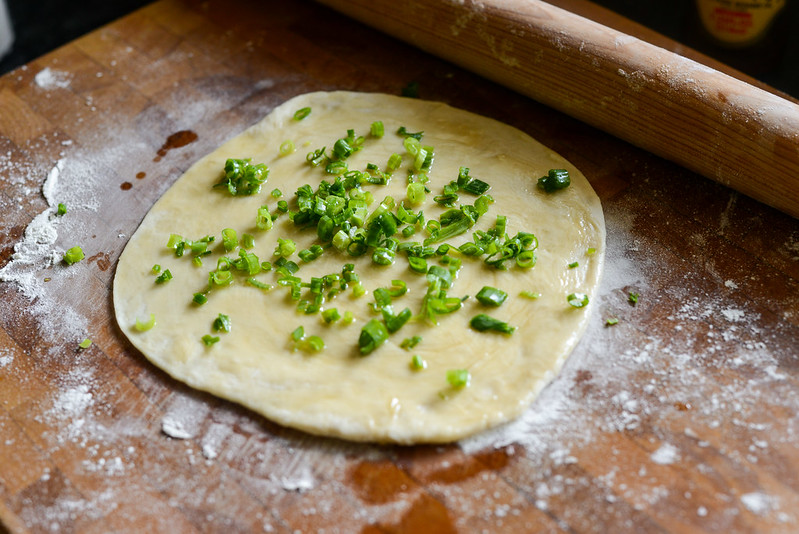 Then the process of rolling it out into an eight-inch round and brushing on sesame oil is repeated. The only difference this time is that instead of sprinkling the dough with salt, it's adorned with scallions. 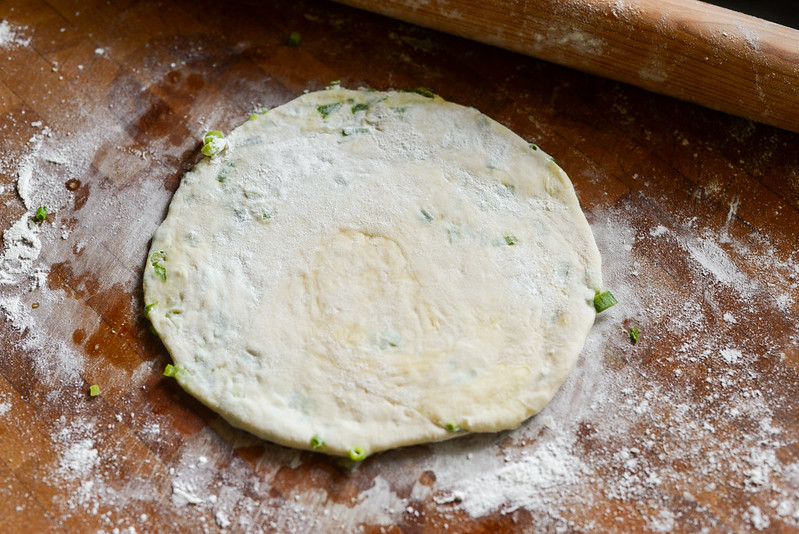 Then the process of rolling, spiraling, and flattening is repeated. You'll find that with all the scallions now inside, it's harder to roll out the circle, which is one reason why that on this last go-round, it's only rolled into a six-inch disk, which also creates the right height for the final pancake. 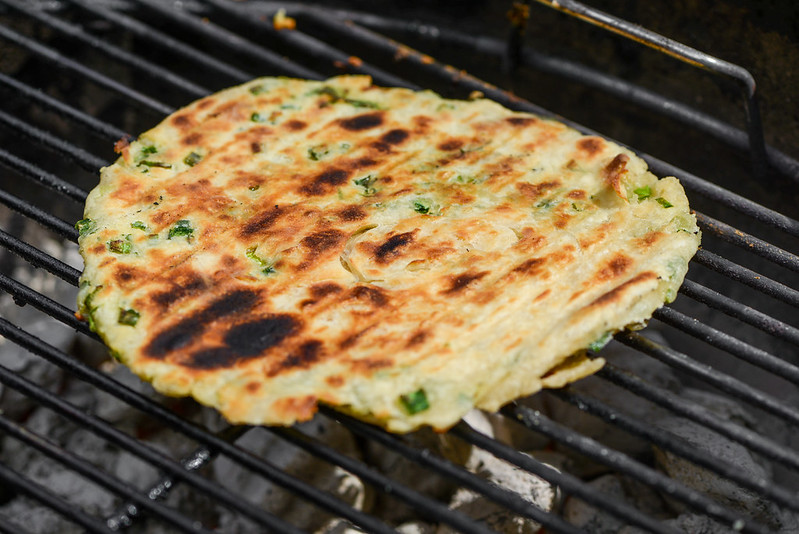 My normal process from here is usually to fry the dough in a little bit of oil in a cast iron skillet, but all you really need to make them great is a lot of a heat, and you certainly get that on the grill. I tried cooking these both on a medium-hot and very hot fire, and while it's easier to accidentally burn them over very hot heat, this heat level churned out the crispiest and flakiest specimens. 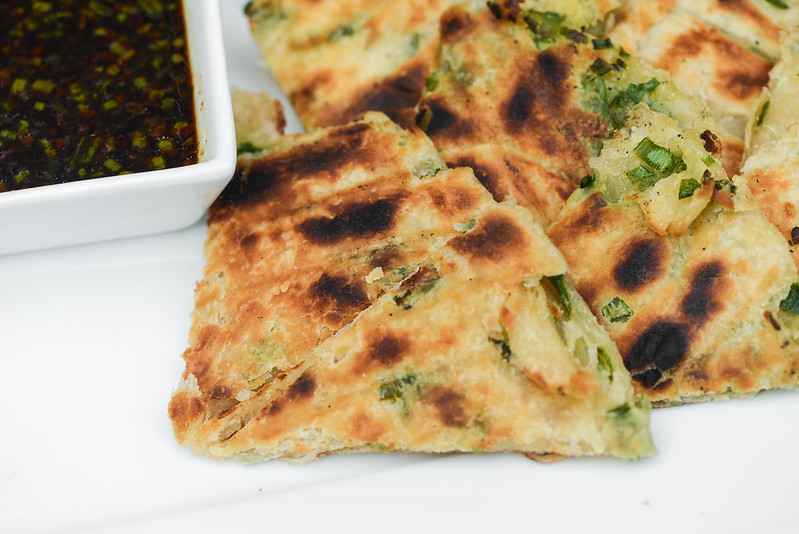 And that's exactly what a great scallion pancake is all about—a fresh and hot bread with a pleasing crunch that gives way to tender layers between the crunchy outside. The sesame oil lends a nice roasted flavor that contrasts with the mellow scallions, but it's the dipping sauce that really brings in the savoriness and rounds out the experience. All-in-all, it's not much work to take these from start to finish, it's just a matter of learning how to roll and form them correctly, which by the third pancake, starts to feel like second nature and you'll probably wonder, like myself, why you haven't been making scallion pancakes your whole life.