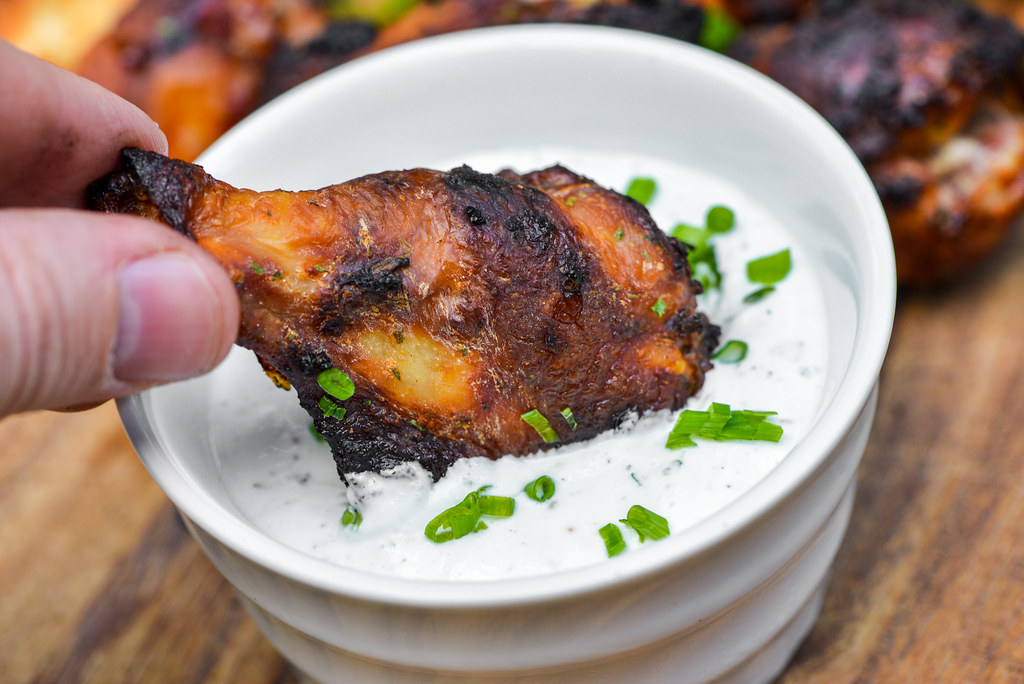 Woohoo! We made it through 2020, which was no small feat. The start of the new year is always extra exciting for me because I dedicate the entire month of January to one of my favorite foods—chicken wings! 2021's Wing Month line-up feels bittersweet though. Like in past times, I worked on these recipes throughout the prior year so I could have the time to refine and bring you the best wings recipes I can. I often try out more than the usual four recipes and have hoards of friends over who help me eat and validate whether I'm on the right track with things. In contrast, this past year I was left to just myself and my wife to cook for, and while we both appreciated each of these recipes, the joy of sharing with friends was lost. This new reality led to different recipe directions though, would could be a positive thing when you consider these ranch wings were an outcome of that. 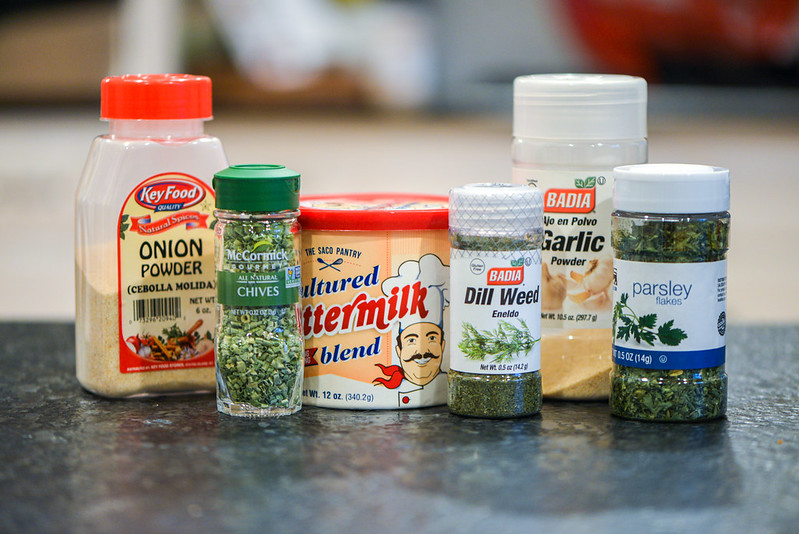 Texans seem to love ranch, and my wife is from Texas and puts the stuff on things I would never even consider to be ranch fodder. In my Serious Eats days as a sauce developer, I made a from scratch ranch recipe that tasted really good, but it didn't get my wife's full stamp of approval since it definitely veered from the ingrained flavors that come out of a seasoning packet or dressing bottle. So when thinking about my audience of two for these wings, I wanted to deliver a ranch experience that would make the wife happy, and it seemed like it was a good time to actually learn what goes into that powdered seasoning. 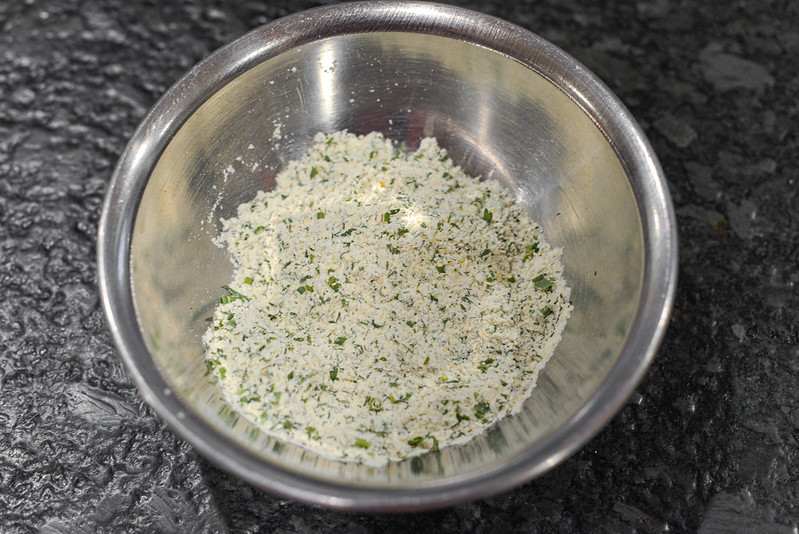 The base is buttermilk powder, which is something I didn't even know existed, but low and behold, it was there on the grocery shelf when I went to go look for it. A heavy layer of dried herbs came next, which was a mix of chives, dill, and parsley. Finally the duo of onion and garlic powder went in, and I added a dash of cayenne just because I always like a touch of heat. I made roughly six tablespoons of the seasoning and then divided it in half—part to use on the wings, part to use for a dip. 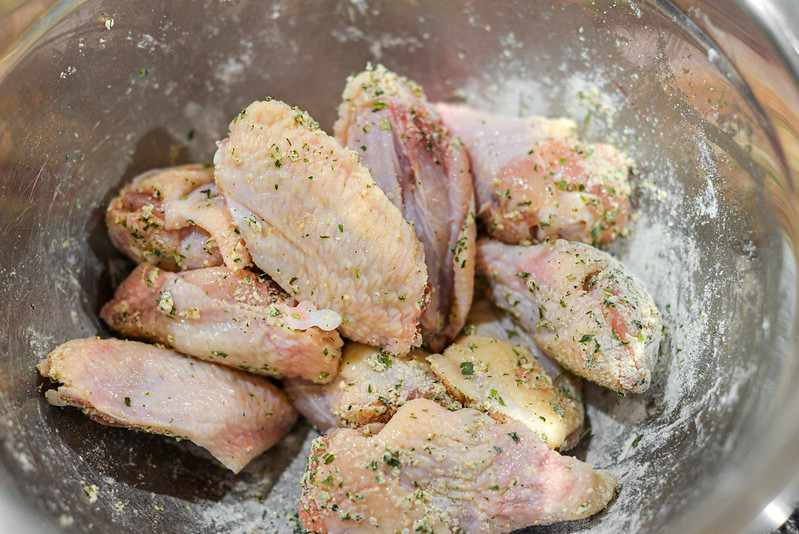 To the seasoning destined for the wings, I added baking powder and salt, then applied it to the chicken which I had patted dry with paper towels first. For longtime readers, this procedure will be a repeat, but if you're new to this site, it's good to know that the baking powder is clutch here for creating a textured skin on the wings that's similar to the way they would turn out if they were being deep fried. 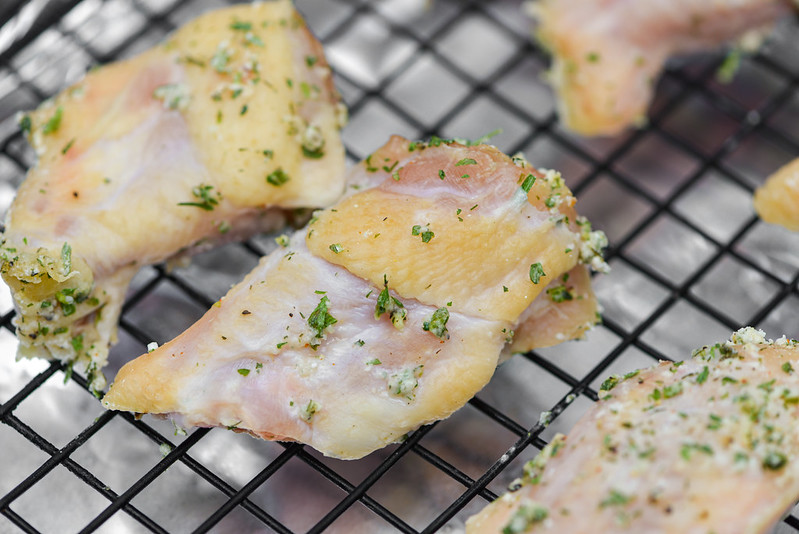 That's only half the equation to get crisp-skinned grilled or baked wings though, the second half is allowing them to air dry. I did the air drying by placing the wings on a wire rack set in a baking sheet, then placed the baking sheet in the fridge over night. The moisture loss on the exterior of the wing will let it brown and crisp more effectively in dry heat cooking scenarios. 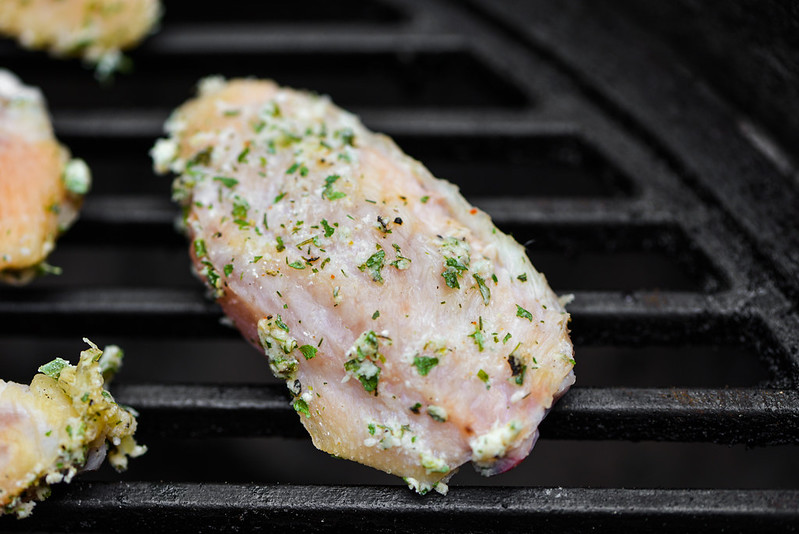 The next day I fired up a chimney of coals, then dumped it out on one side of the charcoal grate, leaving the other side empty. After putting the grill grate in place, I arranged the wings on the cool side of the grill, covered, and let cook. 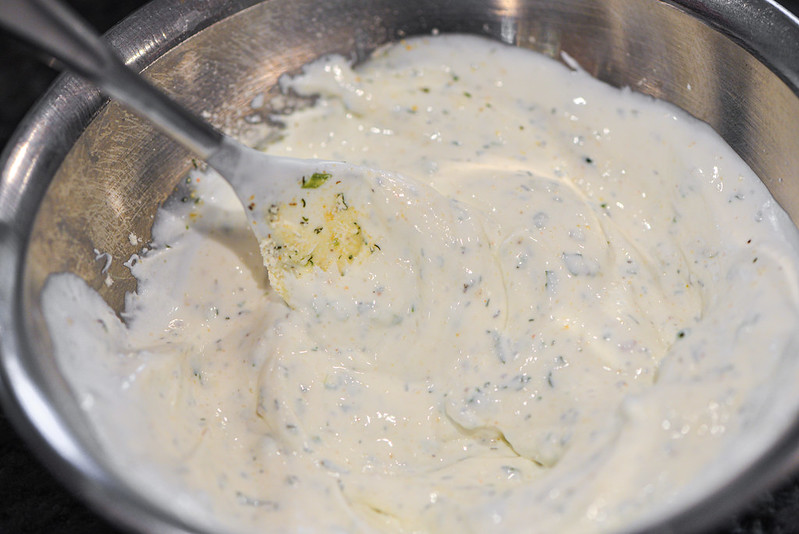 While they roasted, I went inside and whipped up the accompanying ranch dip, which was merely mixing the remaining seasoning with about a cup of sour cream. After letting it sit for a few minutes, I tasted and confirmed that the ranch mixture I put together tasted on par with what you'd buy at the supermarket, and I got excited that my wife was in for some wings I thought she was really love. 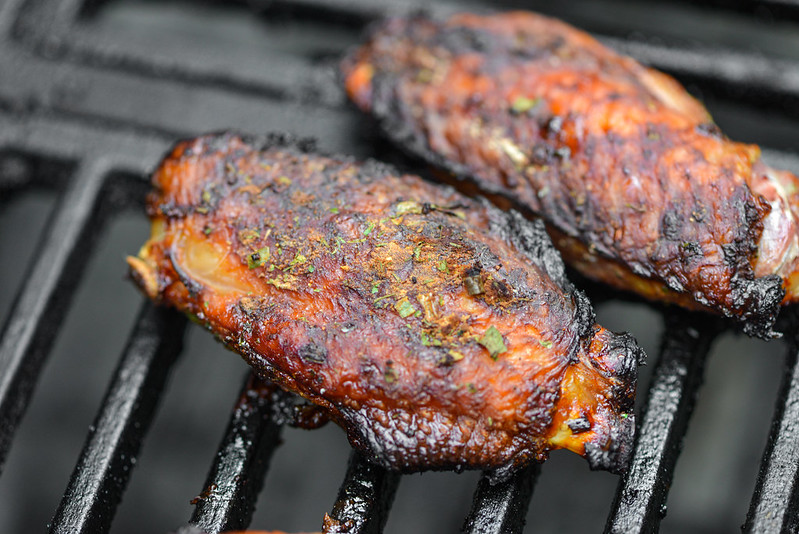 I usually cook my wings for 45 minutes, which seems to almost always be the right amount of time for them get browned and crispy using high heat. I checked these at the 30 minute mark just to see if they were doing ok and I was greeted with super browned skin that was already blackening in spots. This was a surprise to me and I think it was a combo of my fire being hotter than usual and probably the way the buttermilk powder browns. Luckily, even though these cooked about 15 minutes less than normal, they were still super crispy like I wanted. 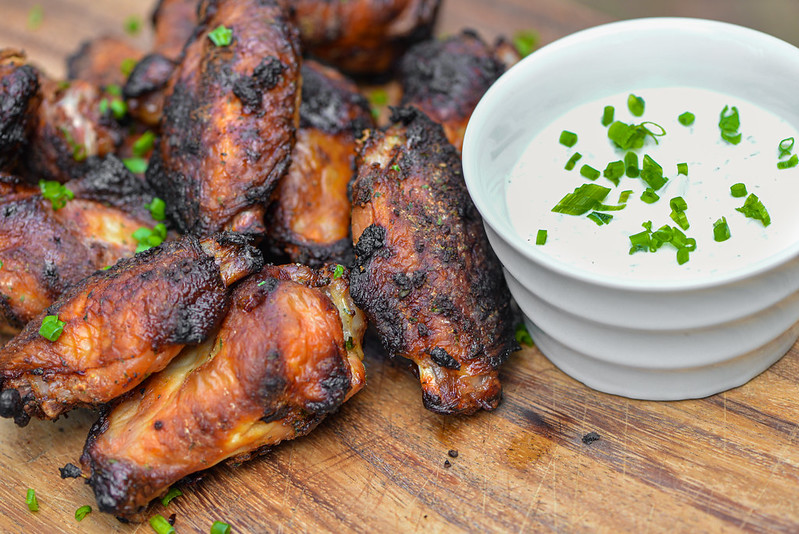 When prepping the wings, they had a ranch aroma so strong that I feared I may have over seasoned them, but after cooking, the ranch flavor mellowed a lot and was altered. They still had a ranch quality to them, but they didn't shine until they took a dunk in the dip. The interplay between the familiar ranch dip flavor and the baked seasoning tasted really great and delivered more complexity than I was originally intending. I was certainly happy, and I never fully confirmed verbally with her, but a plate of bones and no complaints save for a comment on a stronger than normal dill flavor, let me know the wife thought they were at least above satisfactory. I can image more incarnations of ranch-based wings in the future and I think this might just be a start of experimenting to come up with more and better recipes which I hope to be able to share with my friends in my backyard later this year. 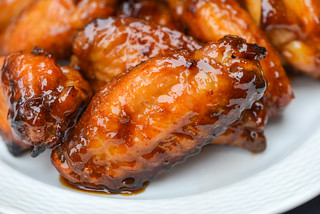 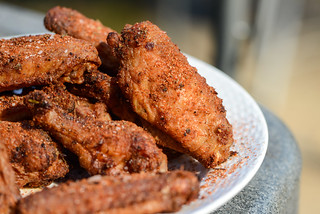