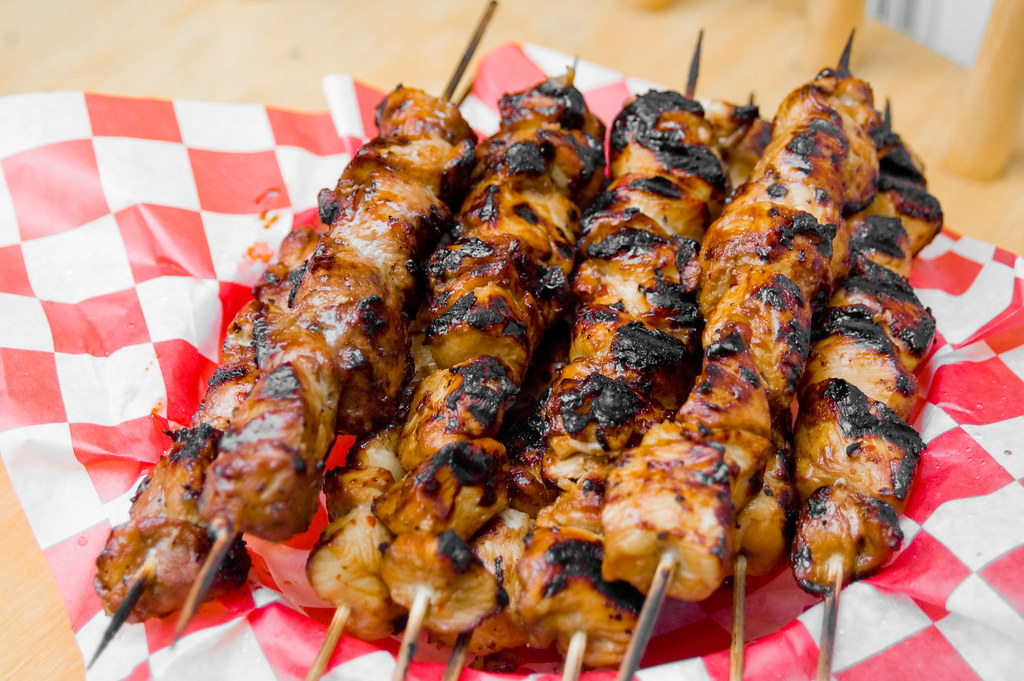 What was I thinking when I attempted to make Filipino BBQ last week from a cookbook? Why would I ever do that when I have direct connections to family from the Philippines that could have warned me what I was doing was wrong? I don't really know why I chose to do things the way I did, but I made sure to correct the problem before the grand Filimeato Feast. I went straight to the source for a recipe, provided by the bbq maker in the gf's family, and the end result was everything I ever wanted. 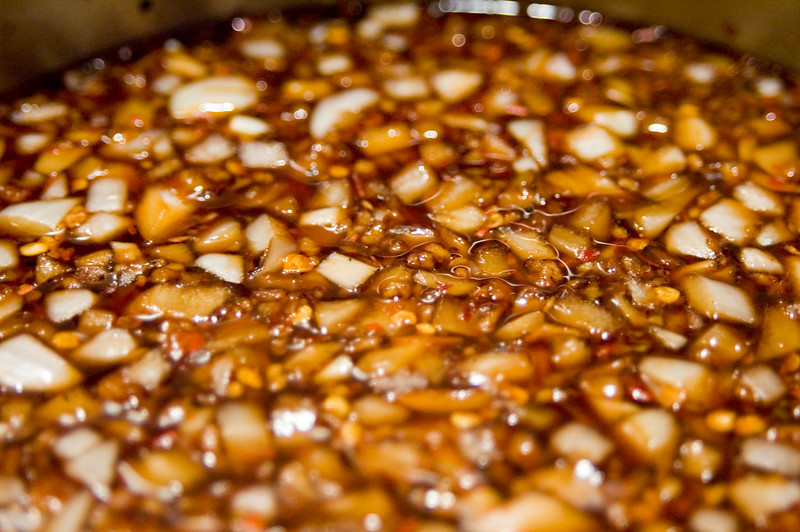 Just because I had a source for a family recipe didn't mean this was easy. To start, just trying to get the recipe proved difficult, since it turns out the uncle who makes the bbq works a night job and was always asleep when anyone tried to go to him to get it. Second, when a recipe finally came through, there were no measurements, and not being a chef plus Filipino cooking still uncharted territory for me, the task of making sense of it all was a little daunting. Yet I forged ahead, seeing as I had promised a feast and was not about to make bad on that commitment. 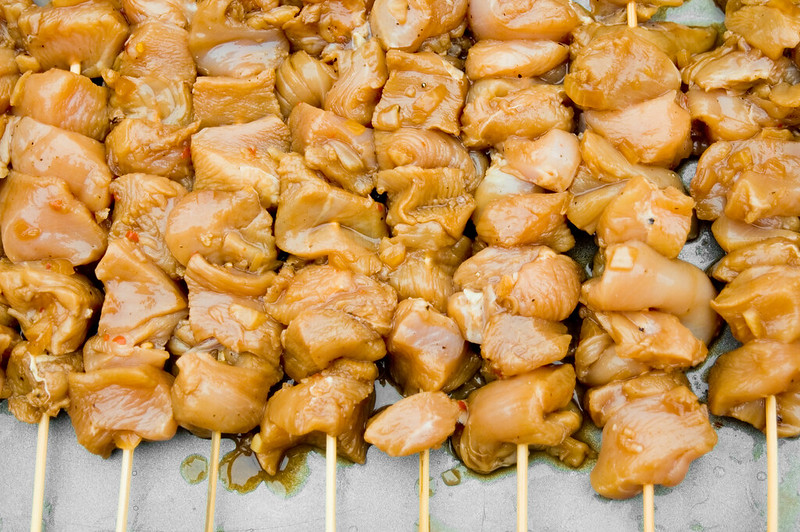 So I took my best shot on making the marinade, having a little bit of reference based on my earlier attempt and some other recipes I saw on the internerd. Although I was constantly tasting the mixture and adjusting, it's still a little tough to really know how it was going to turn out when all is said and done. Once I arrived at a suitable flavor, I set the pork and chicken to soak and take it all in for 24 hours in the fridge. 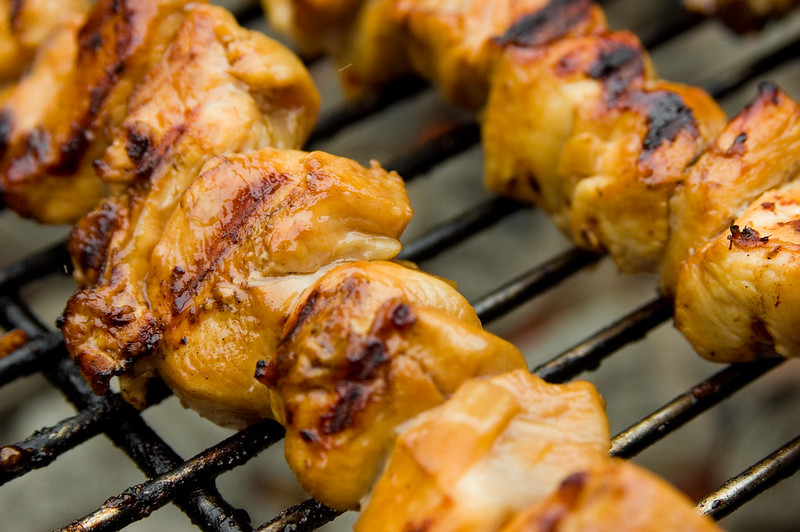 Now the first moment of truth arrived. After skewering all the meat, it was time to grill. I knew right away something was amiss with my previous bbq when I noticed they were not becoming nice and glossy and caramelized over the hot coals. Part of getting this recipe right was making sure they looked right, since we eat with our eyes first. So the skewers were all down on the grill and I waited an excruciating few minutes to turn the first one, but when I did, I saw the marvelous sight of success, huzzah! 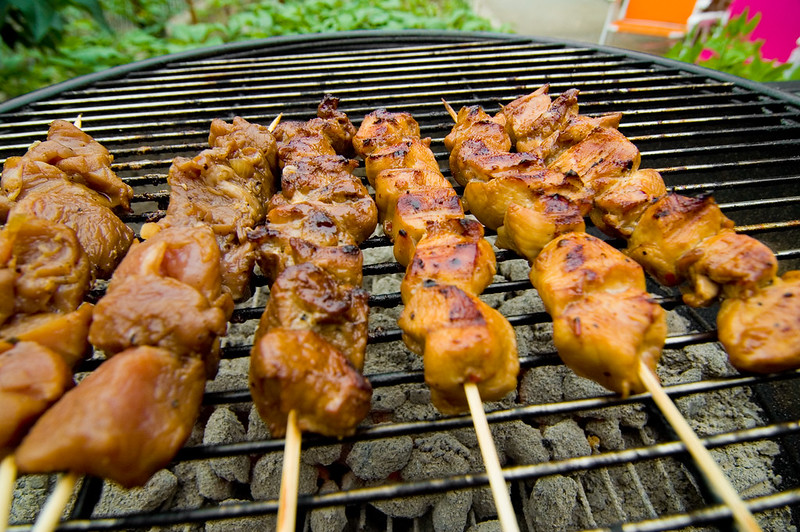 I was able to wipe the sweat from my forehead, but I wasn't out of the woods yet. After another 10 minutes or so of grilling came the most crucial moment of this whole process, the taste. I started with the chicken. First bite, pretty good, very close to what I was expecting. I was pleased. After a chicken skewer, I went for a pork, and *oh my god* was that thing delicious. Not only was the flavor almost nail-on-the-head perfect, but it was so tender and juicy, every bite created an urgency to get to the next to keep the goodness going.

Now I was kicking myself in the head, since I had made twice as many chicken skewers than pork. My desire to cook them all and eat them myself had to be restrained, seeing as it was only fair to let every Meatwaver get a taste of their own. In the end I did get one more pork bbq, and was pleased with my success and happy seeing everyone else enjoy this part of Philippines I was able to bring back with me. 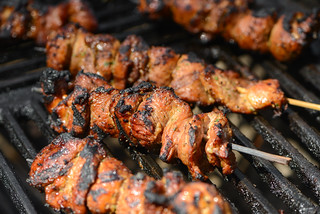