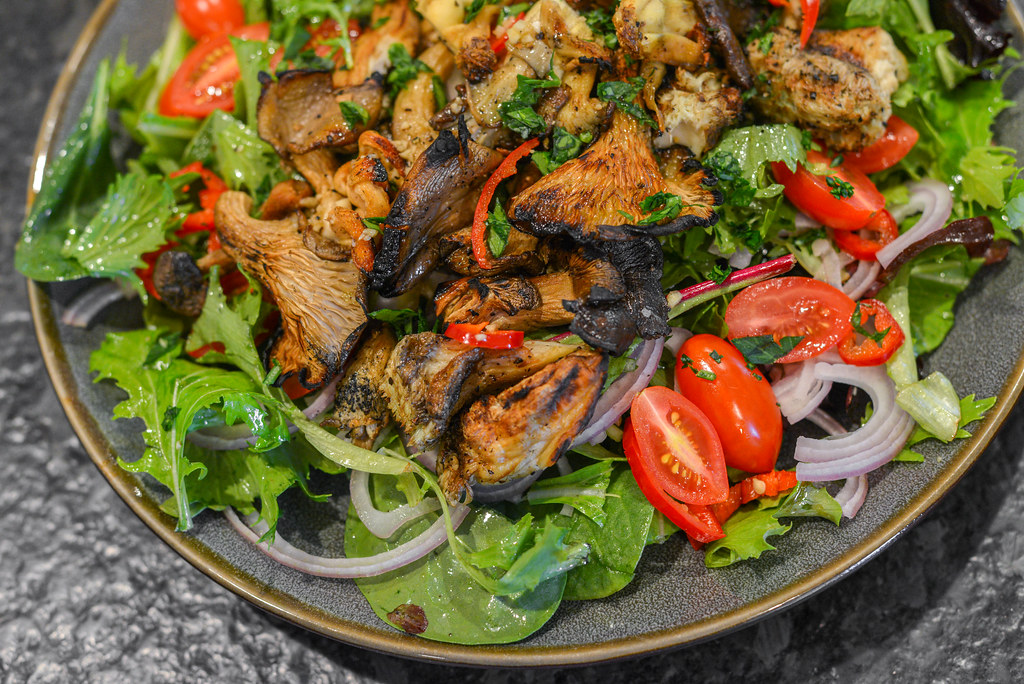 The addition of a mushroom vendor at my local farmer's market has broadened my own mushroom universe. There was once a time when I wouldn't come near a mushroom, but I'm now pretty well versed in all the varieties I can pick up at my local grocery, but it wasn't until mushrooms showed up at the market that I started to be introduced to varieties that may not be well suited for big market grocery sales, but are crazy delicious, like lions mane and cinnamon caps. This vendor also offers boxes of mixed varieties, which I picked up recently and then decided to just grill the whole thing and turn those delectable fungi into this grilled mushroom salad. 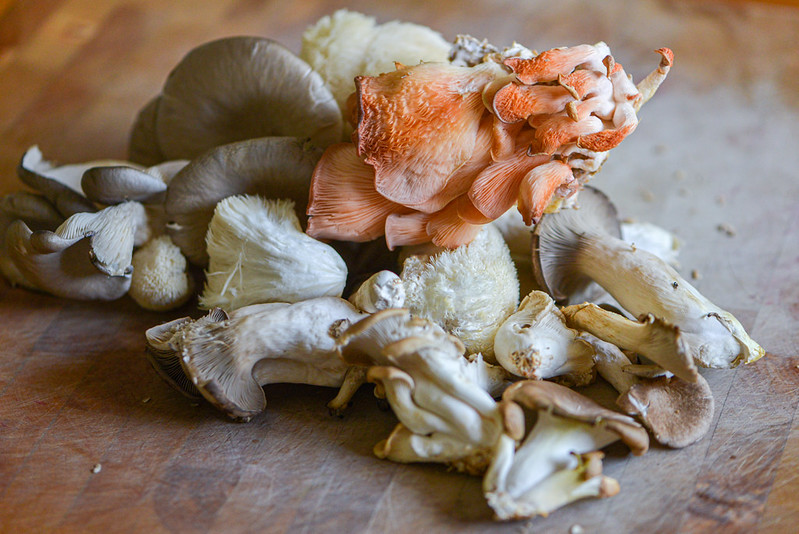 The thing with the variety box is you don't actually get to pick out what mushrooms you get, so it's something I'd mainly go for when I don't have any specific dish in mind. The day I bought this box, I really had no idea what I was going to use them for and I actually sat on the mushrooms for a few days and really needed to cook the variety of blue oyster, pink oyster, and lions mane into one dish before they started to go bad. 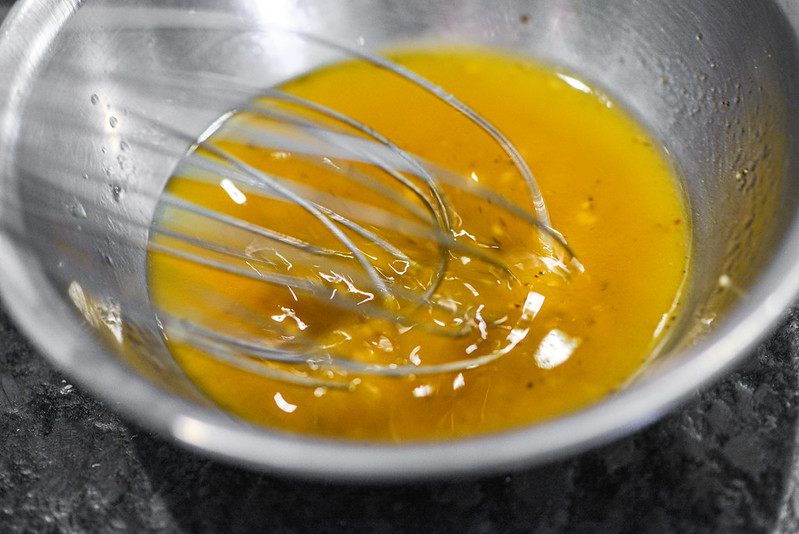 I decided a salad would be an easy solution, and in an uncommon turn for my recipes, I made this one more simplistic than usual. The dressing was essentially three ingredients—sherry vinegar, extra-virgin olive oil, and garlic plus seasoning—and I almost started dumping more ingredients in there, but I wanted the dressing to have a light touch in order to center the mushrooms as much as possible, so I stopped myself from doing so. 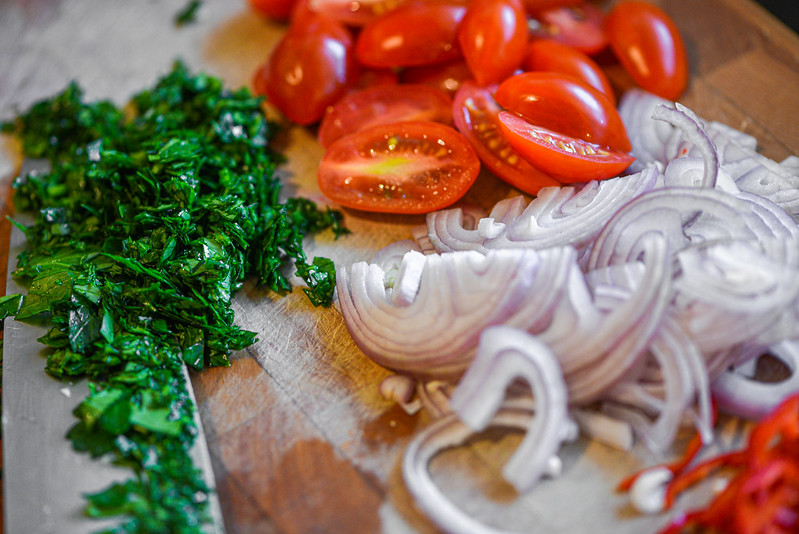 I do think a salad needs some contrast in textures and flavors though, especially if it's going to be a main dish, so I grabbed some things I had around the house to achieve that. This included shallots for a sharp crunch, cherry tomatoes for bursts of sweetness, Fresno pepper for a touch of heat, and parsley mainly as a garnish. 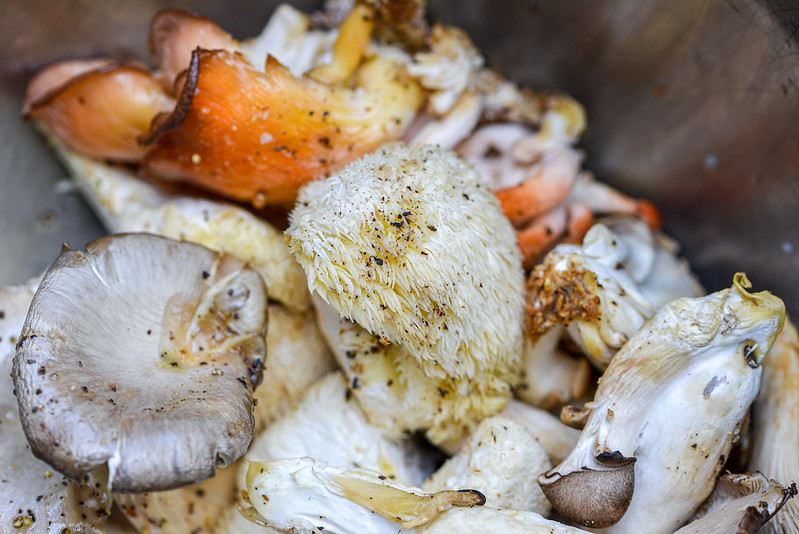 Since making the natural flavor of the mushrooms be the centerpiece of this dish was a priority, I did little to prep them. After brushing off any dirt, I merely tossed the shrooms with oil, salt, and vinegar. 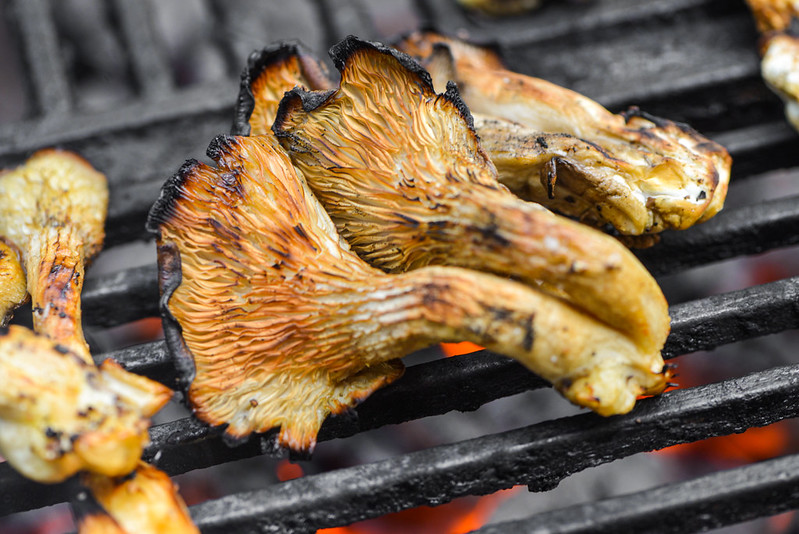 I did things a little different for me on the grill too. Where I normally cook mushrooms over indirect heat at first, I decided to grill these over a hot fire from start to finish. My goal in doing this was to give them extra browning and slight charring that would bring out the flavor of cooking with a live fire more than indirect cooking can achieve. This worked out quite well with the mushrooms browning deeply by the time they were tender throughout, which only took around five minutes over high heat. 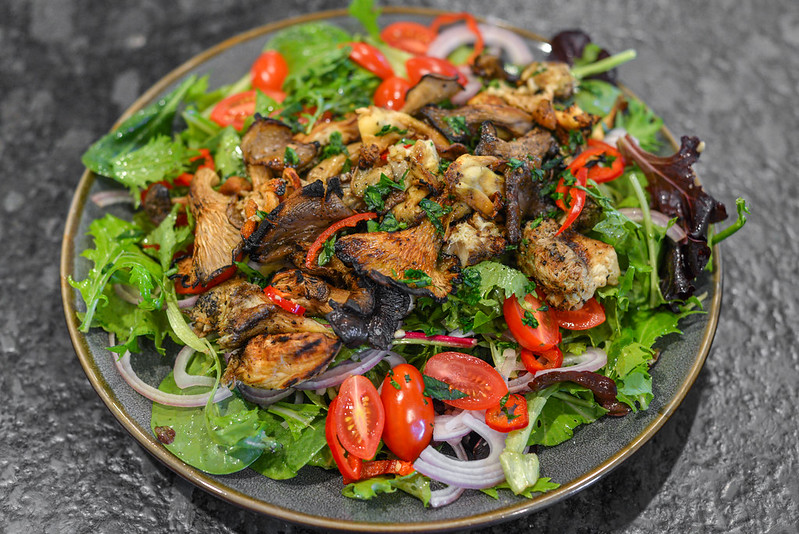 After tossing some spring mix with the dressing and additional salad components, I plated it up and adorned the mushrooms on top, drizzling them with a bit of the remaining dressing. I had a single plate for my wife and I to share for dinner, and I was expecting it to not render us full enough for a meal and we'd be snacking after finishing this dish. That ended up not being the case though as those mushrooms were surprisingly filling and satisfying, delivering a ton of flavor and heft to fill our stomachs. They were certainly the star attraction of the plate, but the tangy dressed greens offered a fitting fresh contrast to the mushrooms, with the tomatoes and shallots playing their intended roles as well. I personally really loved the injection of heat from the fruity Fresno pepper, but I can imagine that wouldn't be for everybody, so I marked it as optional accordingly in the final recipe. One of the features I liked the most about this dish is that it can change in really interesting ways depending on which mushrooms you choose, so I could pick up a different variety box and make the same salad recipe, but have it turn out to be something unique.