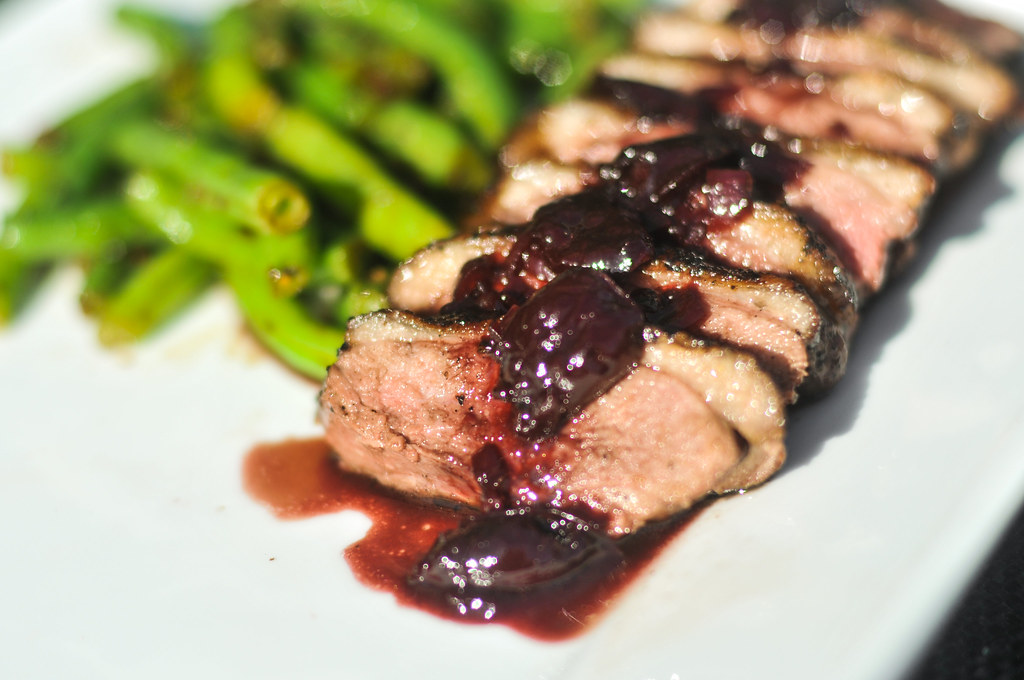 Ever since figuring out how to get a fairly crisp-skinned, medium-rare duck breast on the the grill, they've become a more regular part of my grilling routine. This was a pretty big achievement for me, since previous failures kept me from investing in delicious duck breasts because I wasn't able to pull them off with results that I deemed acceptable. So now that duck is finding more favor at home, I'm always on the lookout of new ways to do it up, and this variation of peppered duck breasts with a cherry-port sauce is great compliment to the winter that has come early this year. 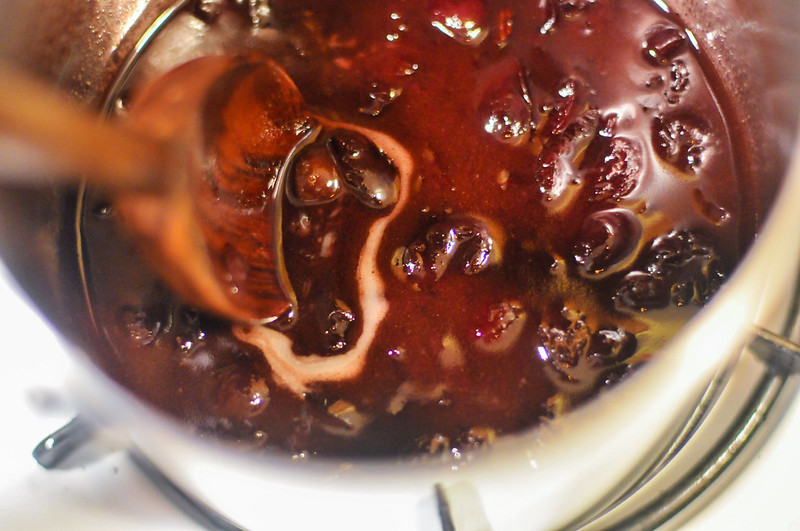 Something about sweet port feels so right when the cold starts to hit—that warming sweetness is comforting as the days grow short and frigid. So it seemed fitting that it served as the base of the sauce for these duck breasts. The port was paired with a natural tart contrast in the way of cherries and slowly simmered along with shallots, balsamic vinegar, and brown sugar until the sauce reduced by half and the cherries were completely soft. 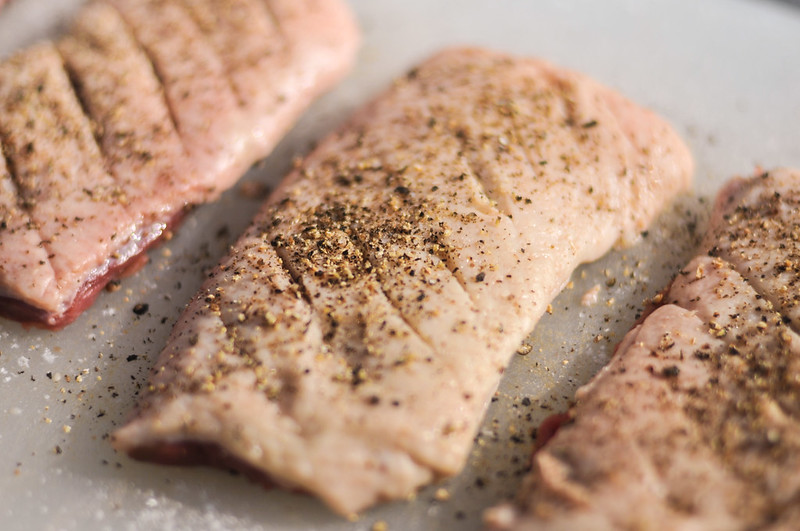 With the sauce done, it was time to turn my sights on the main attraction—the duck. The best way I've found so far to get the right amount of fat and a crisp skin on the grill is to start by making some slits in the skin and into the fat of the duck. These slits will later allow ample space for the rendering fat to flow out of. The only other preparation these breasts got were the standard salting and an extra heavy coating of freshly ground black pepper. 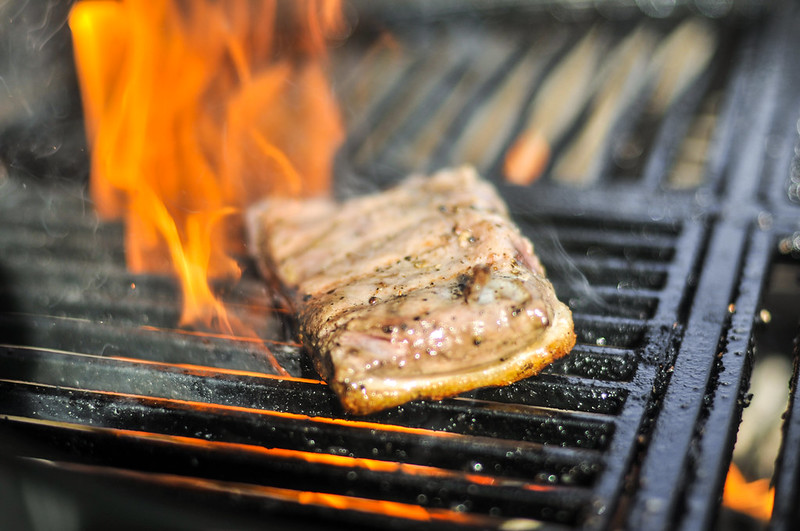 Creating an escape route for the melting fat sounds like a great idea, but when it comes to actually grilling, it's a giant pain in the ass. Getting a good duck breast over a live fire is no easy feat. All that rendering fat hits the coals and causes constant flare-ups. Some excess heat is good—this is what helps the skin crisp—but too much will leave the skin a charred mess. So I kept a constant eye on the duck as it cooked, moving away from harms way when flames rose up. I did this until the skin had crisped to my liking, at which time enough fat had rendered out to leave only a pleasurable layer remaining. 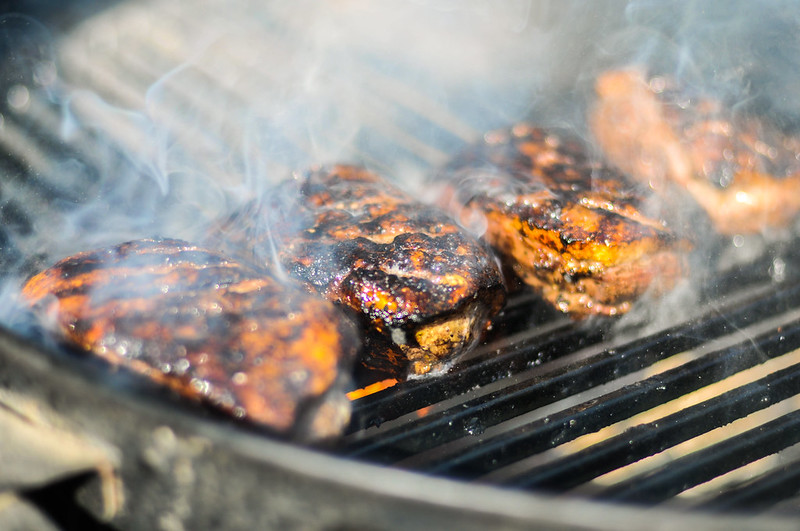 Thanks to the high heat and all the flames, the crisping and rendering tends to happen quickly. It's so fast though that the meat rarely reaches the medium-rare temperature I'm shooting for by the time the skin is done. To get to my final ideal temperature of 130 degrees, I either flip the breasts and continue to cook over direct heat if I'm not too far off that number, or move the duck to the cool side of the grill, cover, and let it roast over indirect heat if I can tell it's going to take a while to finish up. 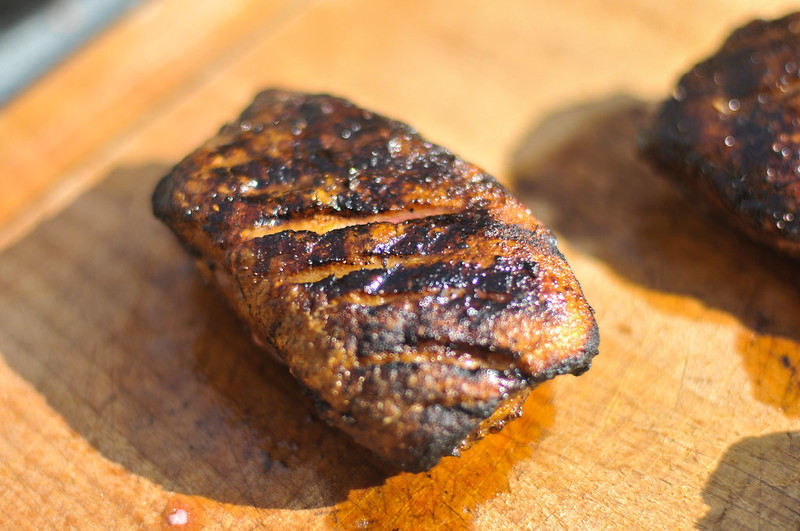 The effort put into cooking finicky duck breasts is well worth it though when you're rewarded with this—a medium-rare beast with a crisp skin and a thin, but luscious layer of fat. Grilling may not be the prettiest way to cook duck breasts, but the little added smokiness and slight char certainly give it a wonderful flavor that makes it unique. 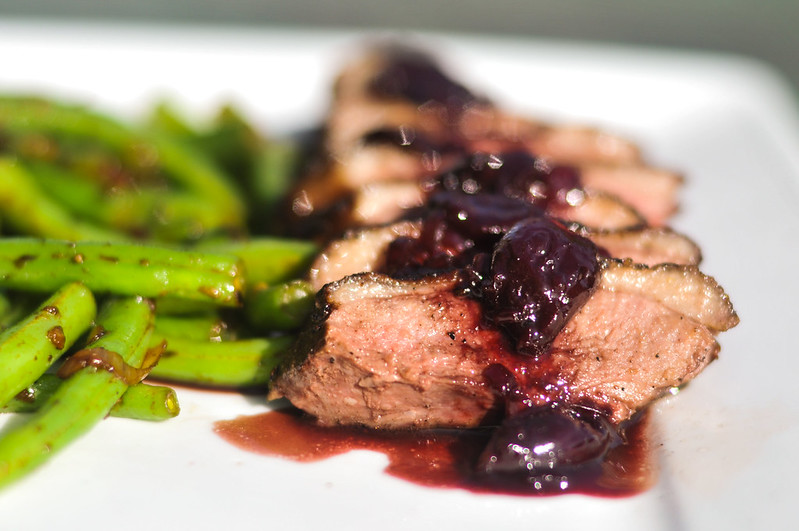 I admit that even with a watchful eye, I may have let a piece of skin scorch here and there, but with the duck's thick peppery coating and that sweet and tart cherry-port sauce spooned on top, I didn't even notice in the end. The stress of cooking the breasts all faded when I began to eat and that juicy meat combined with the robust and fruity sauce, coming together into a rich and warm duo that was fitting for this cold start of winter. 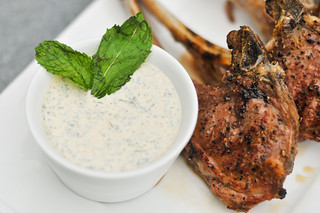 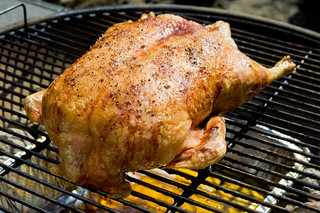