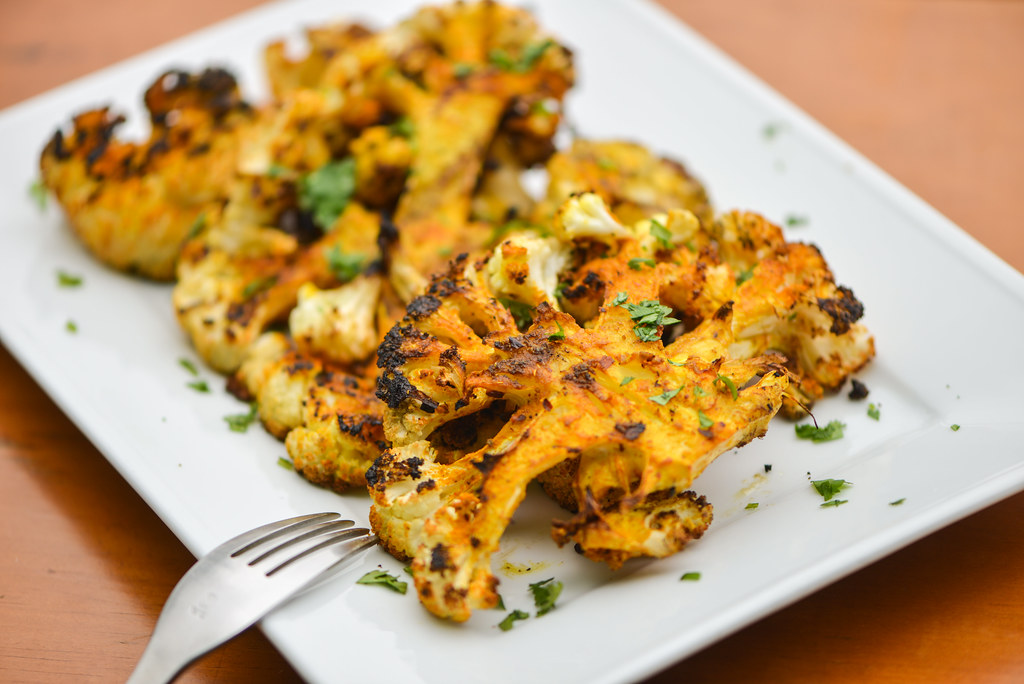 Growing up, I was pretty sure cauliflower contained the plague, or at least I treated it as such, going so far as to remove it from my plate prior to indulging in anything else it sat next to, which was guaranteed to be at least 1000x more delicious in comparison, no matter what it was. I know I didn't give cauliflower a fair shake, but neither did it ever present itself as anything except a bland, pale, and unappetizing vegetable that was almost always either under or over cooked.

In my formative eating years, I was forced to face cauliflower head on though—one week after another, a different colored variety presented itself in our weekly CSA bounty that I had to find use for. I quickly learned that roasting it at a high temperature created an appealing slightly crisp outside with a tender, but not mushy, inside that transformed it from something I actively avoided to openly loved. 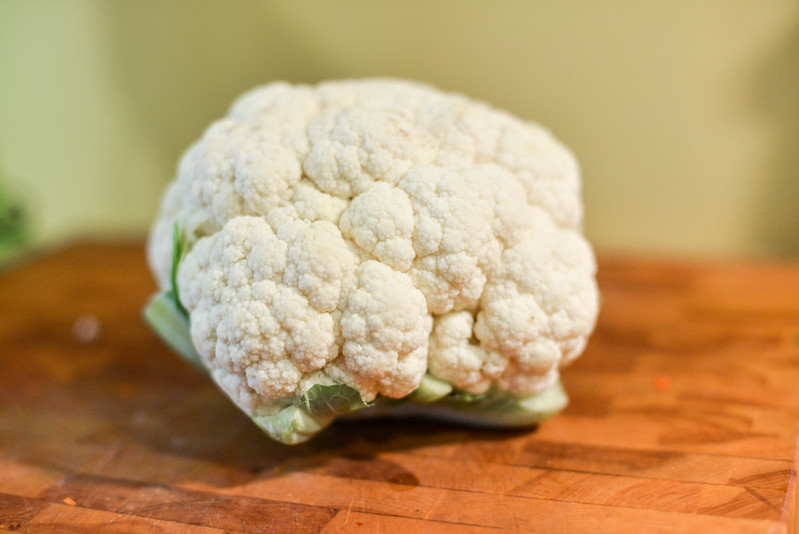 If browning and crunch is what turned me on to cauliflower, it would make sense the high heat of the grill would be the perfect place to achieve this. Unfortunately those small florets would be a bitch to keep from falling in the grates, making the grill a seemingly bad medium for cooking, but that can all be fixed by looking at cauliflower a little differently. 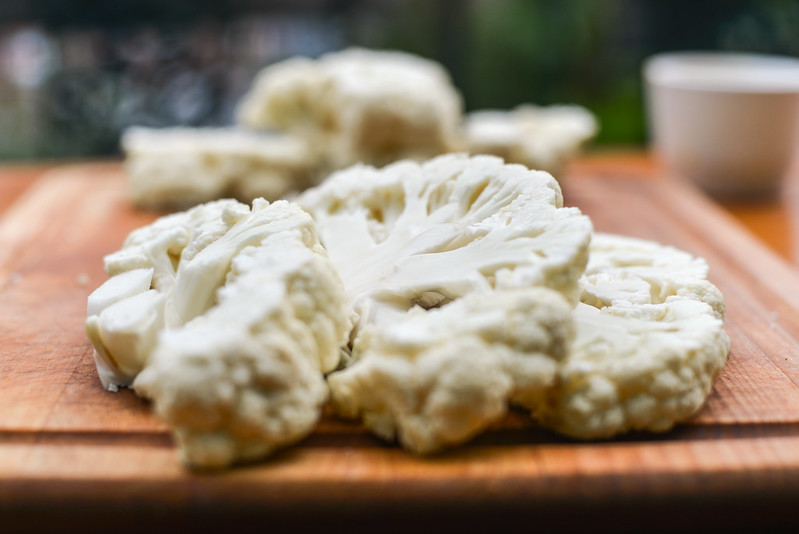 So to start this recipe off, instead of butchering the cauliflower into small florets as I normally would do, I cut it vertically with the stem intact, creating 3/4-inch slices that would be easy to manage on the grill. 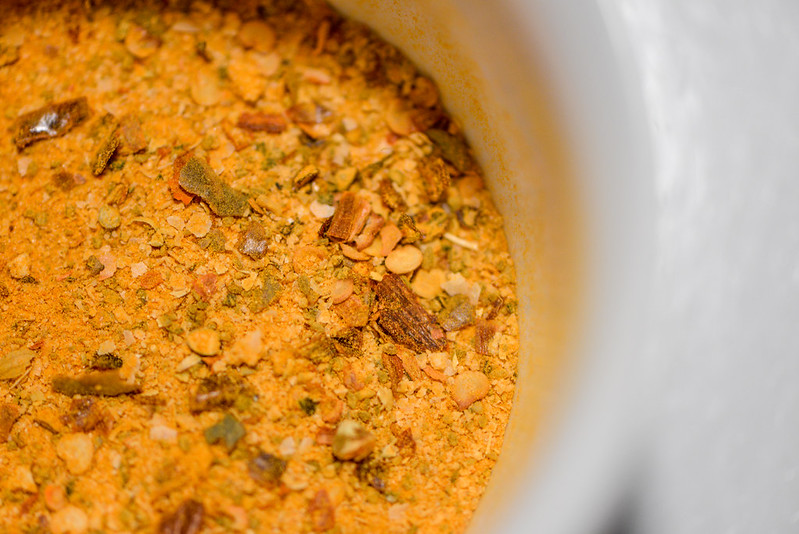 The roasted cauliflower that transformed my perception of this vegetable was done up with a lot of crushed red pepper. This has left me with an impression that spicy cauliflower is superior to any other flavoring. That led me to take inspiration from a super spicy Pakistani chicken keema to create the seasoning for this cauliflower. 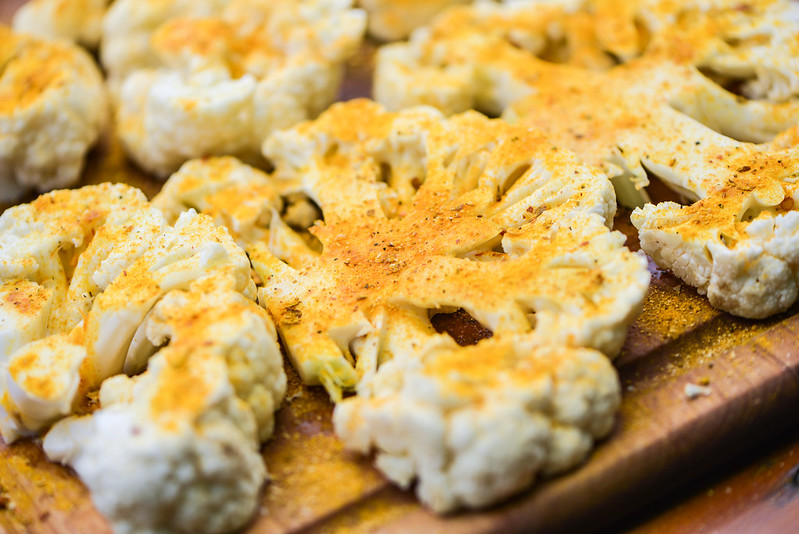 I did back down the heat in the spice mixture a lot, resulting in a rub that was more earthy than spicy—it included salt, turmeric, crushed red pepper, cumin, coriander, ginger powder, garlic powder, and black pepper.

Prior to taking the cauliflower to the flames, I brushed each slice with olive oil and then generously applied the rub. 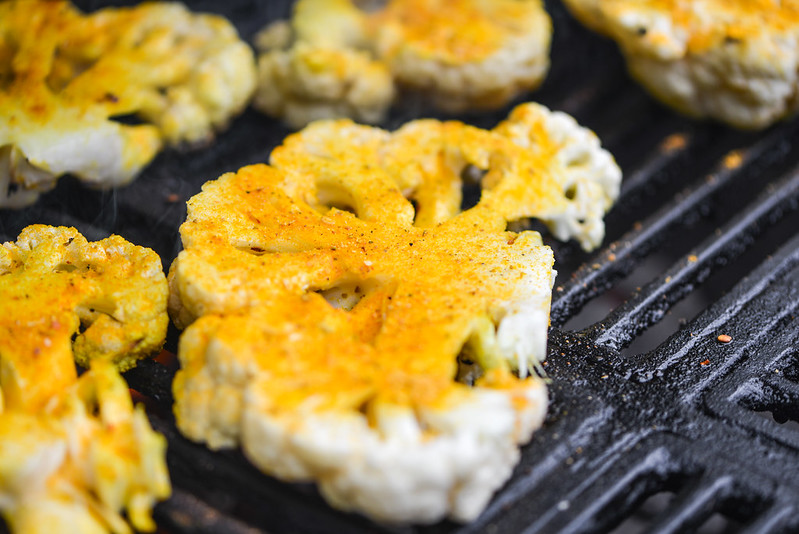 I then placed those now bright yellow slices of cauliflower over direct heat of a two-zone fire and cooked them until they developed some char on both sides. 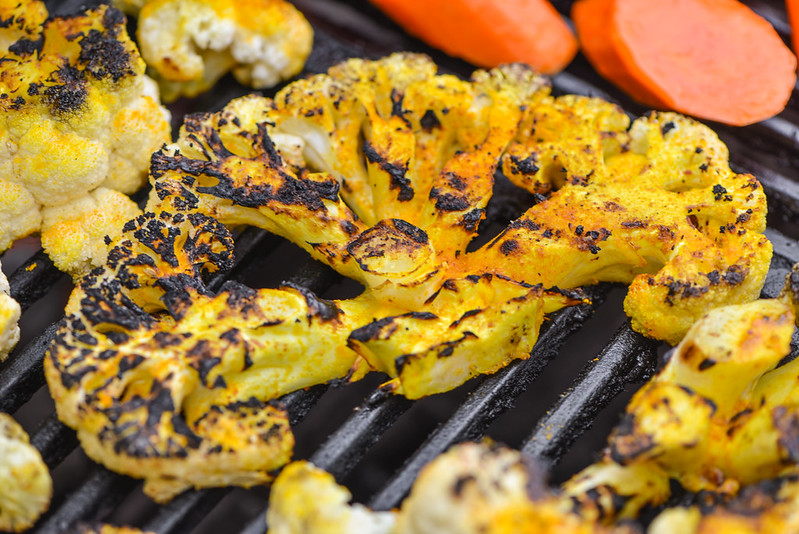 At this point I had the bits if crispy I was after, but the inside was not yet tender, so I moved the cauliflower to the cool side of the grill, covered, and let it continue to cook until softened to my liking, which took just over ten minutes. Off the grill, I sprinkled on a little fresh cilantro and dug in. 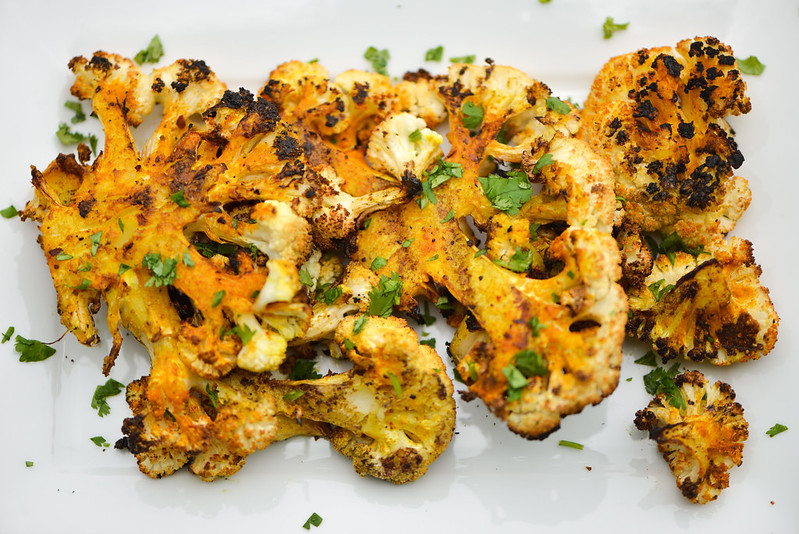 The cauliflower had a great contrast of texture between the spotty char that had a slight crunch to it on the outside and the tender, soft flesh that sat below. The spice rub gave the cauliflower an incredibly complex flavor that was a combination of earthy elements along with just a touch of heat. If only cauliflower was presented to me in this form much earlier, I would have never said a bad word about this fall vegetable.