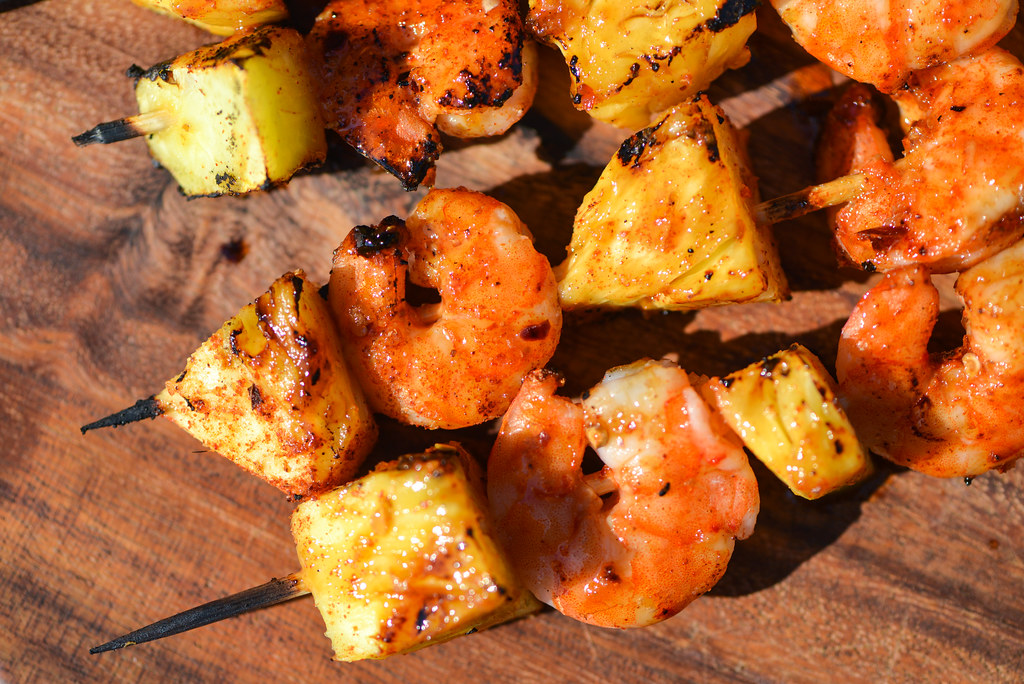 You ever forget to buy or leave out an ingredient when making a recipe? Well, you're not alone. It may look like I have my shit together, but I'm probably the king of forgetful cooking. I can't even count how many times I've needed to make a second, third, or even fourth return trip to the grocery store for a forgotten item, or gotten through a recipe only to realize after the fact that I left something out—sometimes small, sometimes big. In the case of these shrimp and pineapple skewers I had on the menu for my Tiki-themed Meatwave, I remembered to buy the bacon I planned on wrapping the shrimp in, but only realized I forgot to use it when taking the photos—whoops. Wasn't a huge loss though, because these were damn tasty, bacon or not. 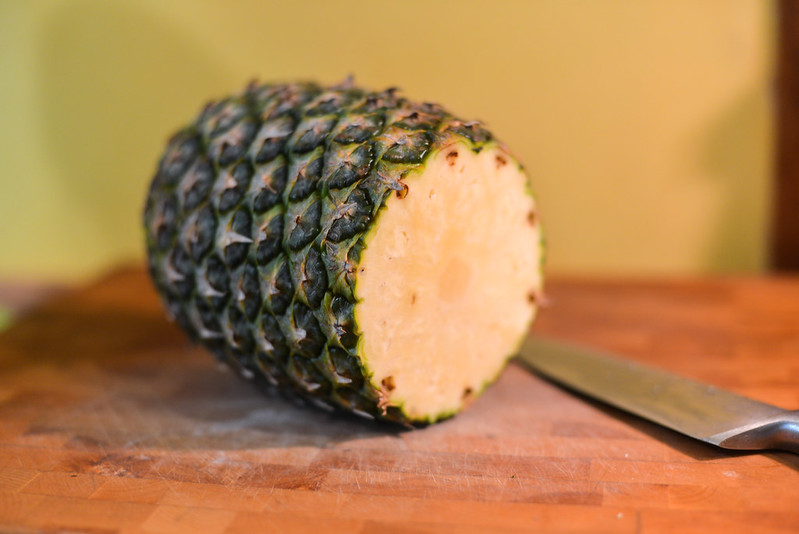 I used to fear recipes that called for chunked pineapple—peeling and getting the pineapple into uniform cubes was a daunting task that I never seemed to do right no matter what method I tried. Enter my Grandma to fix that terror for me. She thought me her consistent way to cut pineapple that has made the task quick and simple for me ever since. 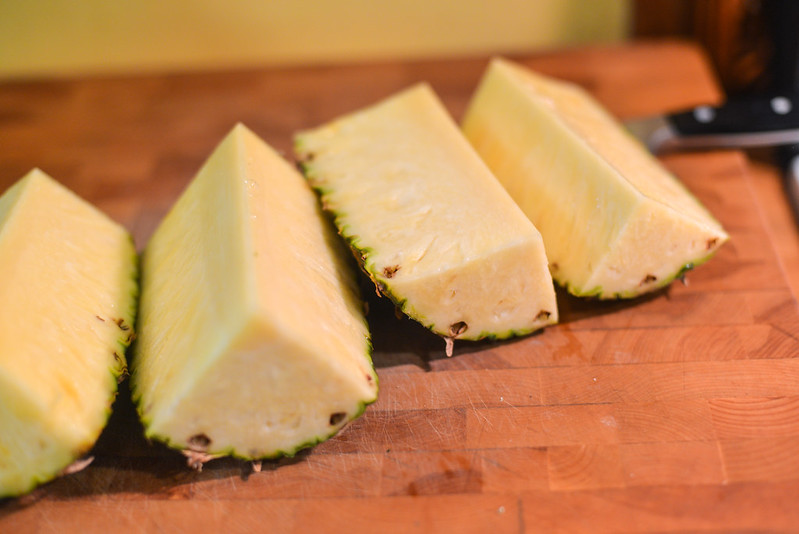 Instead of trying to remove the peel first, as I used to do, I now start by removing both the top and bottom of the fruit and then cutting it into four quarters. 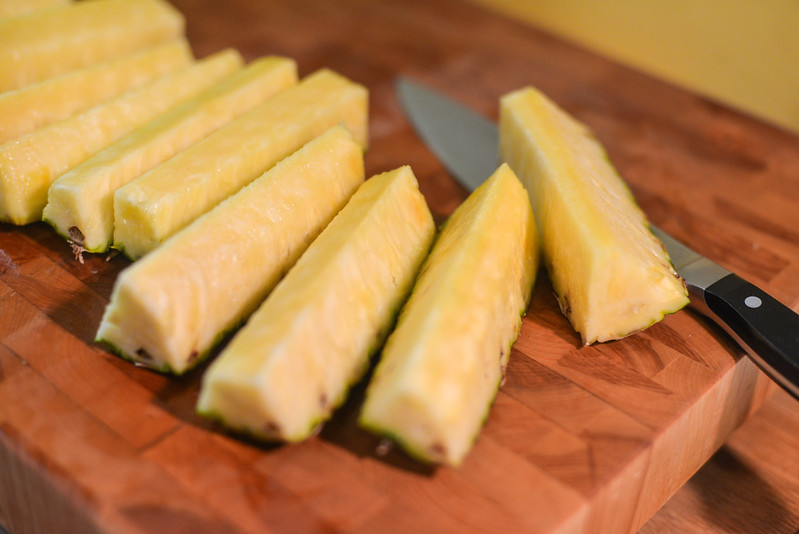 Once in fourths, it's easy to see and then slice out the core. Next, depending on the size of the pineapple, I halve or third each of the four quarters to make pineapple strips roughly one-inch wide. 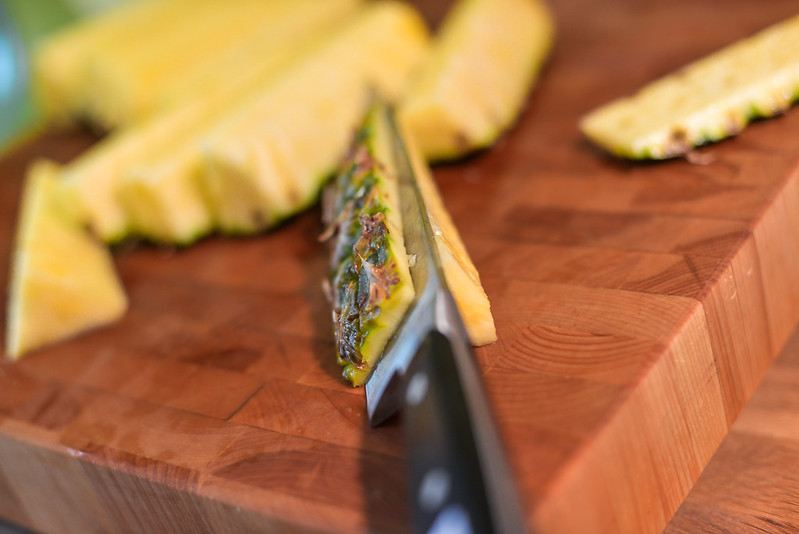 In this smaller size, the peel on each strip doesn't have much curve to it, which then makes it simple to cut it off without any fancy knife work. 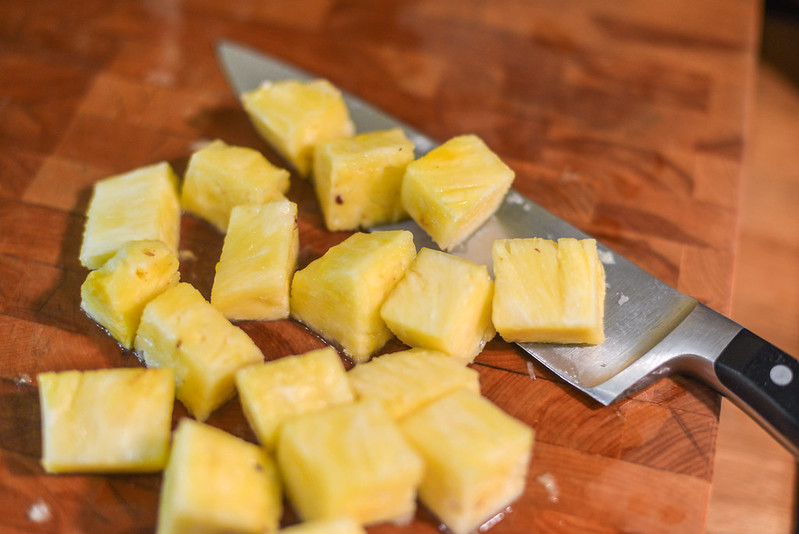 With the peel and core gone, now I all need to do it cut each strip into one-inch portions and voila, perfectly cubed pineapple ready for skewering. 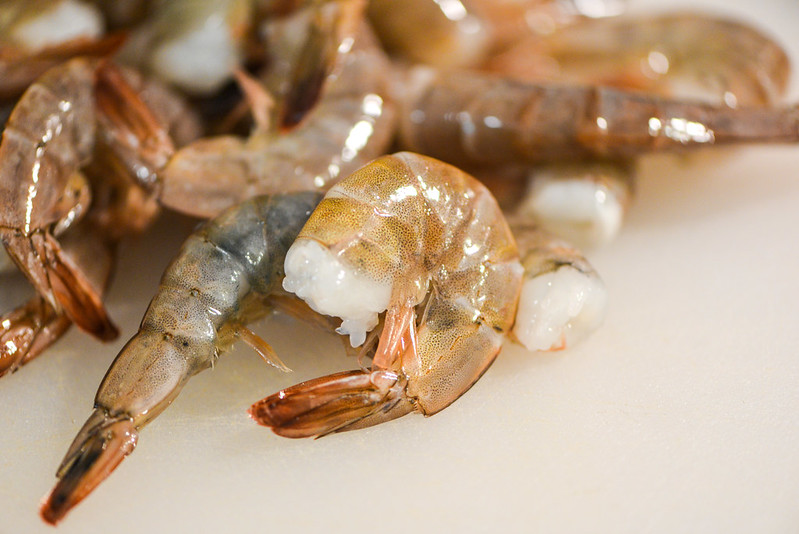 The only other item that was going to be threaded onto sticks in this recipe were shrimp. I used a pound of large shrimp to the one pineapple. If I wasn't a complete dunce, after peeling and deveining them, I would have wrapped each shrimp in half a strip of the bacon I had bought. 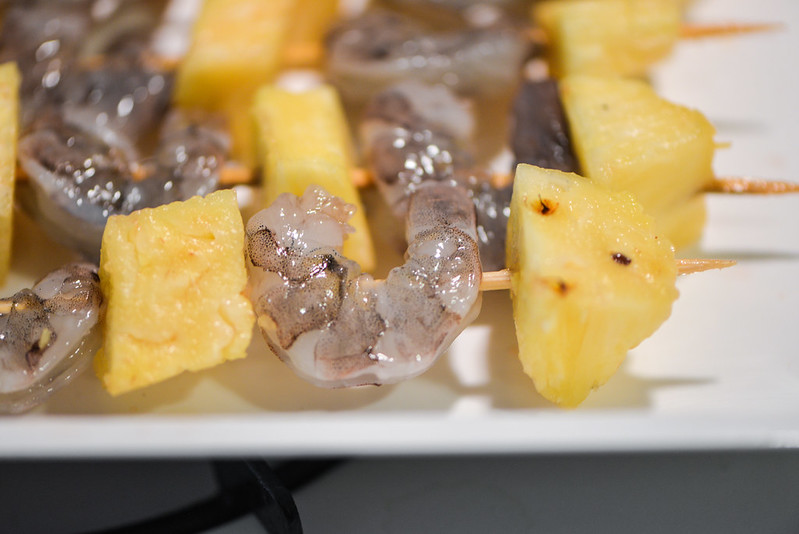 The shrimp-to-pineapple proportions worked out pretty well, allowing me to alternate seafood with fruit evenly across just about every skewer. 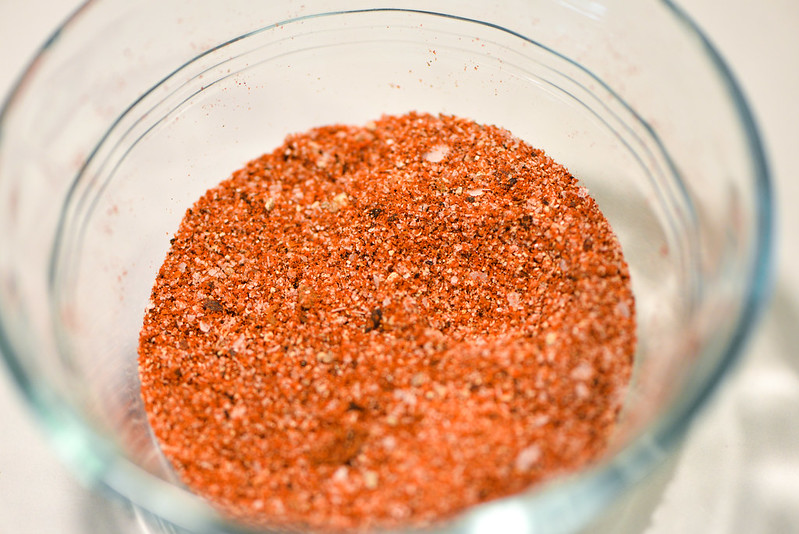 After threaded onto their sticks, I gave each skewer a dusting of a rub that included salt, garlic powder, onion powder, chili powder, white pepper, and cayenne pepper. This formed a nice spice layer to contrast with the sweet glaze I also had in the works. 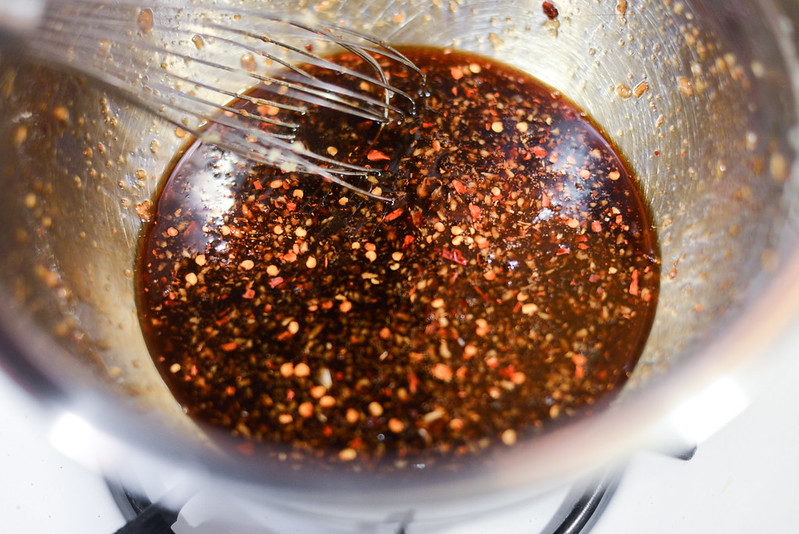 This sauce look familiar? If you were paying attention last week, it's the same one I had made for my glazed pork belly sandwiches. I thought if it would work so well delivering a sweet "island" flavor profile in that recipe, why not put it to good use again with these skewers. 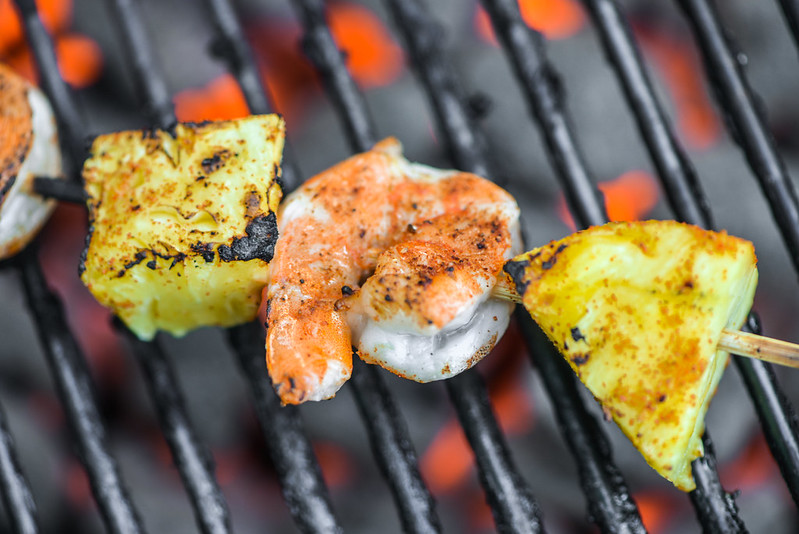 I took a two-zone approach to cooking these up. First I cooked them over direct heat until the shrimp were almost cooked through, but not quite completely opaque. In the time it took that to happen—around two to three minutes per side—the pineapple developed some light, attractive caramelization and grill marks. 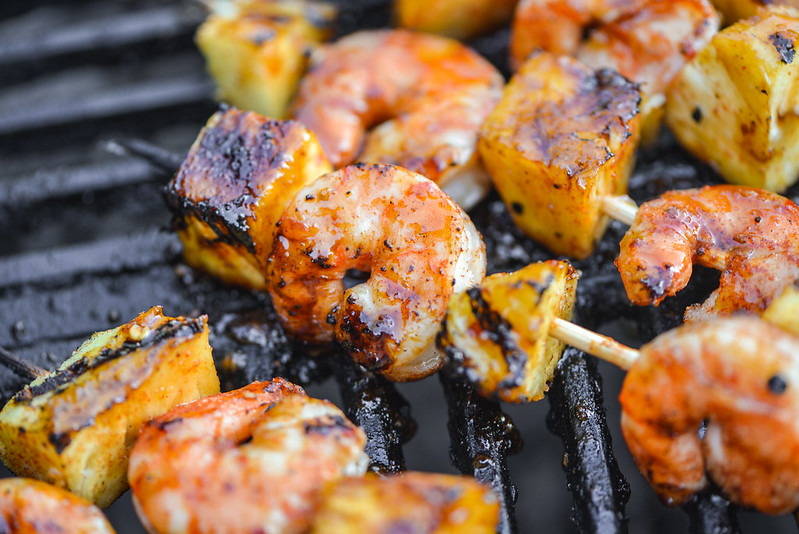 To keep the glaze from burning, I moved the skewers to indirect heat and then brushed it on. Next I covered the grill and waited the couple minutes it took for this sugary sauce to thicken and develop a beautiful glisten. In the that time, the shrimp also completed their cooking. 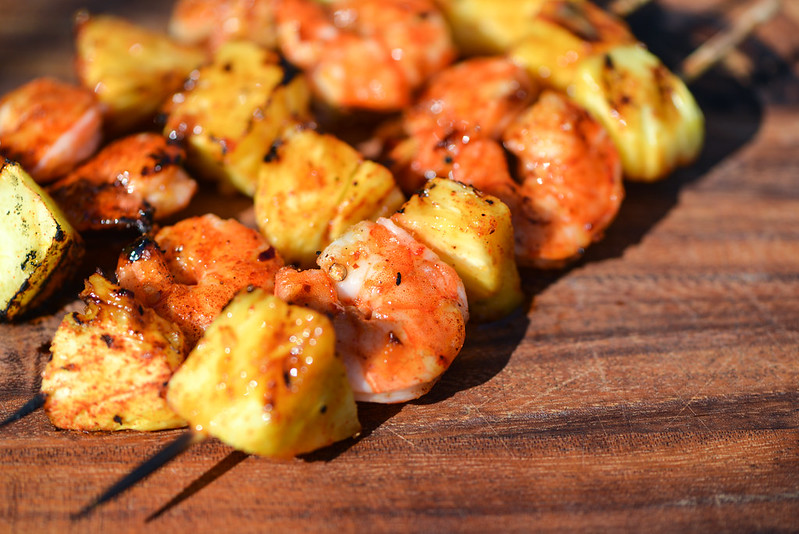 The final product was another great entry in my Tiki-themed day. Unlike the pork belly that I felt showcased the sweet side of things pretty heavily, these skewers felt a little more balanced. The absence of sugar in the rub helped that, along with the two variety of peppers—white and cayenne—which built a unique flavor that contrasted with the sweet glaze nicely. The glaze and rub did a lot of work in flavoring the skewers, but weren't so heavy that they drowned out the natural flavor of the slightly-sweet and tender shrimp that paired very well with the softened pineapple. Until I make them again, I'll be kept wondering if these would have been better if I hadn't forgotten to wrap the shrimp in the bacon in my original plan, but even without it, they certainly tasted fully realized, and most importantly, delicious. 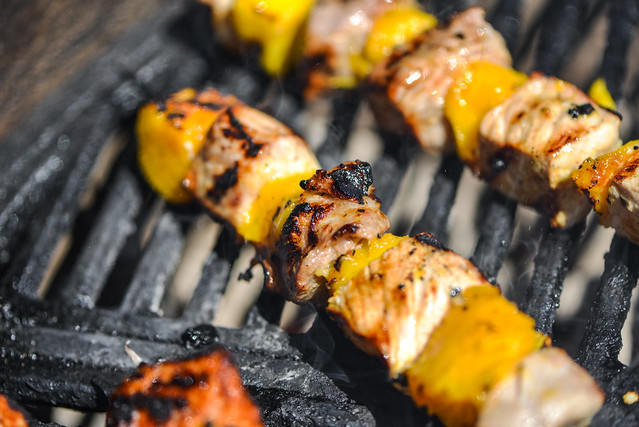