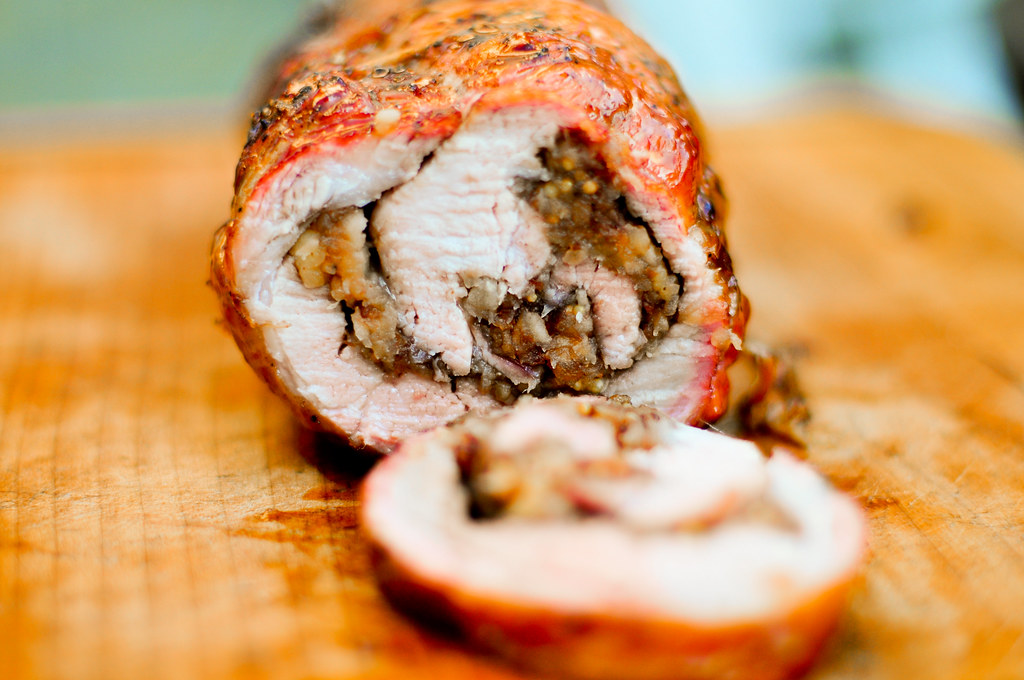 Being Jewish and all, my idea of the Christmas meal growing up came mostly from the pages of magazines and whatever sitcoms were delving into humorous Christmas follies that holiday season (where was all Chanukah hilariousness...oil fire seems like comedy gold to me). What I could gleam from those detached encounters was that Christians loved pork, and loved even more to make it look shiny and sickeningly sweet, and I knew that I wanted it. Forget Santa, Christmas trees, and presents, it was the honey hams, crown roasts, and glazed pork loins that made me long for a taste of the other side. With 13 years now between myself and my kosher past, I've found out that I can have my cake Christmas pork and eat it too, and boy is it fantastic. 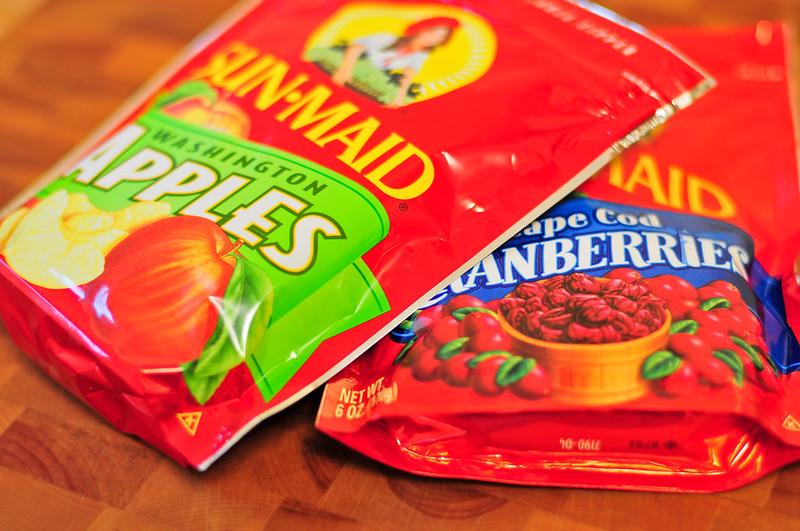 If I'm going to go Christmas, I'm going to go all the way. Although honey glazed ham is easily my favorite of the holiday swine, I stumbled upon this recipe that seemed to be mega-seasonal, using apples and cranberries to create a sweet filling and a glistening glaze for a tender pork loin. 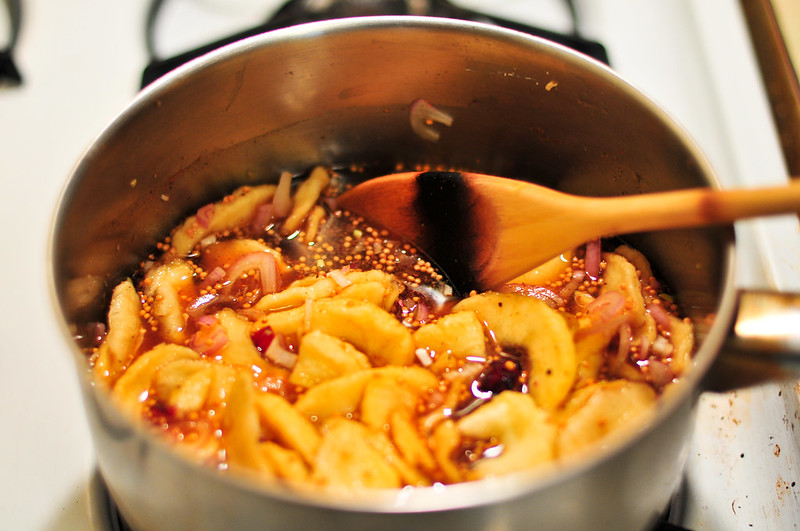 Although it seems like a good time of year for fresh apples and cranberries, dried ones were used here, which seemed even more fitting and sweet. They were cooked in a mixture spices, apple cider, cider vinegar, and brown sugar (yes, it gets even sweeter) until the dried fruit became soft. 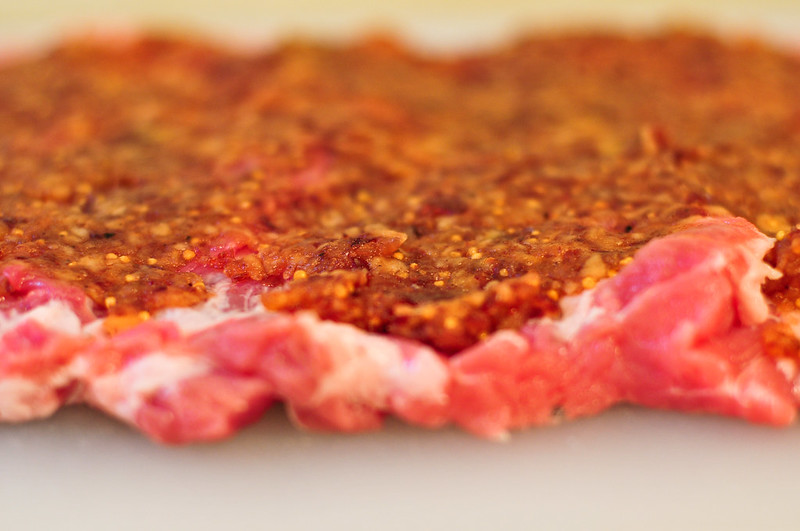 The liquid was then strained from the solids, which were chopped and spread over a pork loin butterflied into 1/2 inch thickness. The liquid portion was boiled down into a thick glaze to be used at the end to give the pork that holiday glisten. 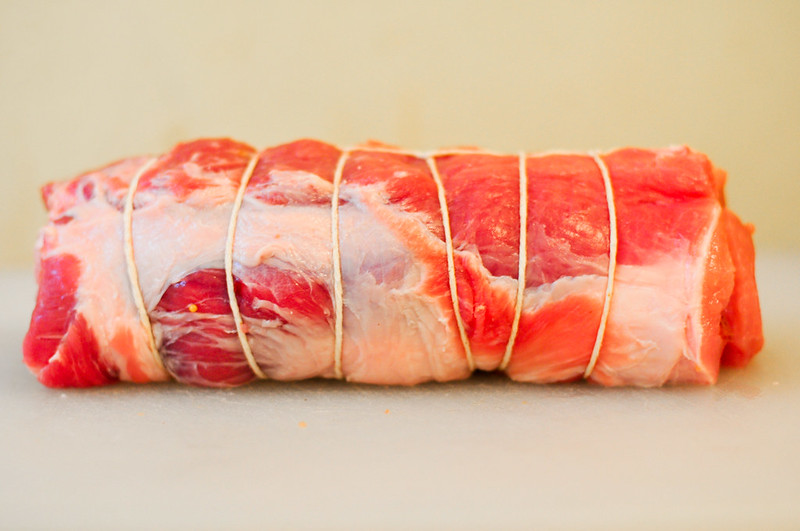 Another reason I loved this recipe so much is because the stuffed pork was rolled and tied, which not only distributed the stuffing evenly throughout each slice of meat, but also created a presentation that could easily be a centerpiece plate among an extensive Christmas spread. Sure it took a bit more work to get this, but that's part of what made it all the more special. 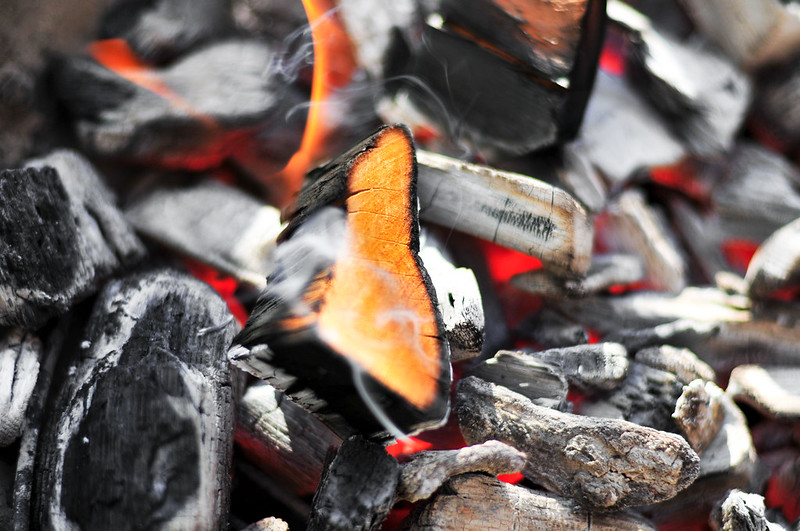 From here the pork could be seared off in a pan and thrown into an oven, but you'd miss one of the reasons it's so much better on the grill—smoke. I added a couple chunks of apple wood onto the coal to give just the slightest kiss of smoke to the pork, adding another level of flavor to the already delectable mix. 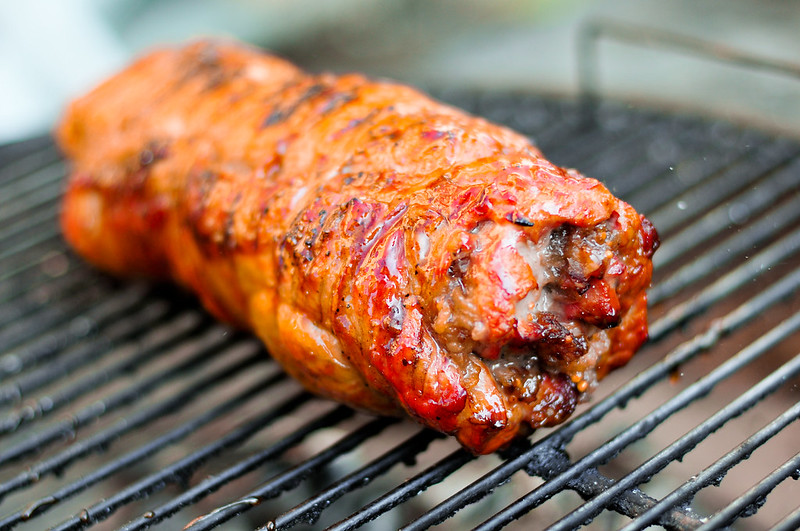 Once the meat hit 135 degrees, it was time to make it shine. When it comes to glazing, I aspire to the Marge Simpson standard of a ham glowing so bright that staring at it could do more damage than a solar eclipse. Although a little short of that, I was proud of the shiny red coating that adorned this roast, giving it that sickeningly sweet look from my memory. 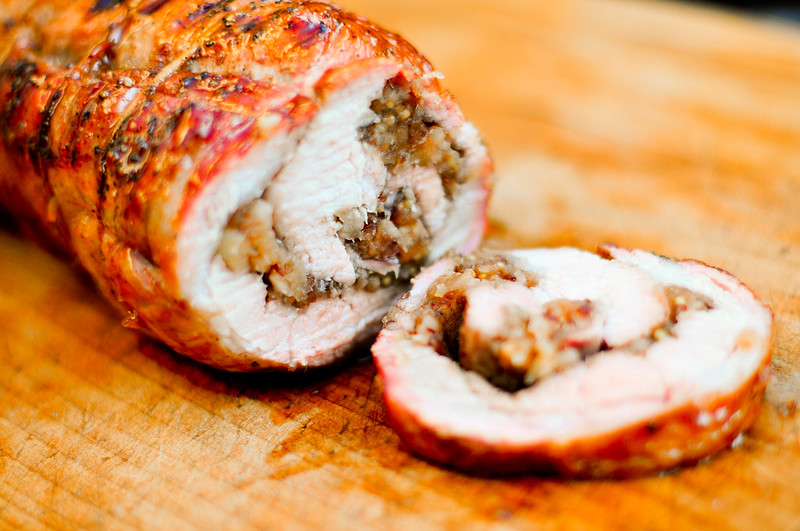 Luckily, only the look was sickeningly, as the pork loin tasted fantastic. Although it could have benefited from a quick brine at the beginning, it was still moist enough to make me happy. The stuffing was fruity and sweet, but not overly, with glaze providing most of the sugar content. The balance between stuffing and meat was right on, with each bite having an even contrast of textures and flavors. Eating slice after slice, I felt comfort in my ability that I too can enjoy some Christmas joy, but at the same time, boy did I want some latkes.