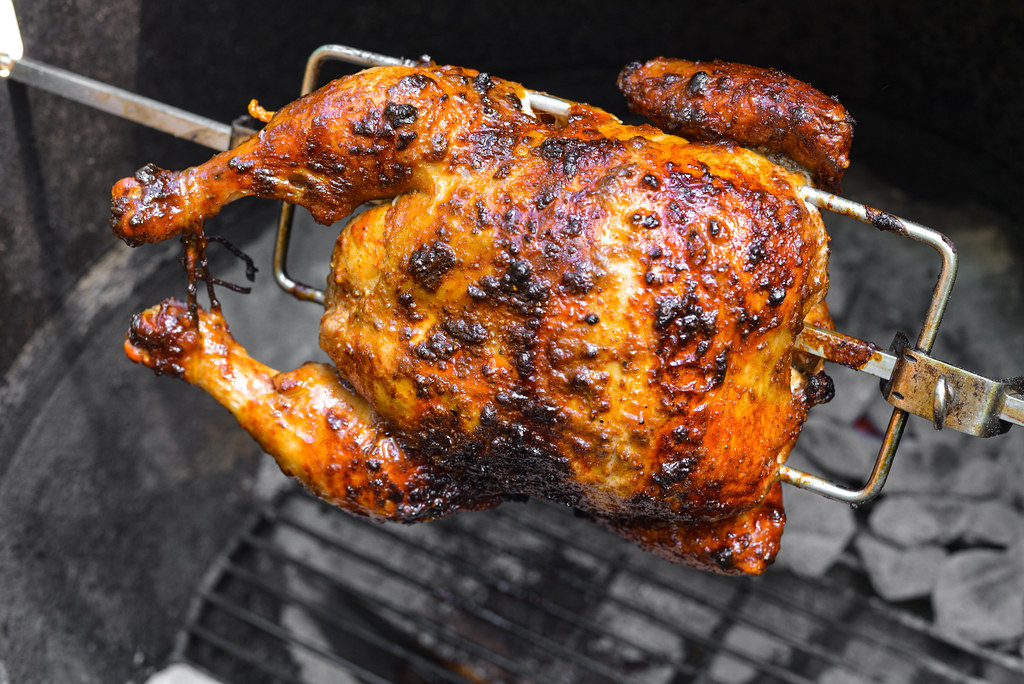 Peruvian chicken was a main reason I wanted a rotisserie and was one of the first things I made after getting one. That was almost 10 years ago, so why did it take me so long to finally get a recipe up on my own site for a favorite eats of mine? Well, it was partly due to the fact that my early attempts didn't hit the nail on the head and instead of continuing to refine my own recipe, I kept Peruvian chicken a mainly eat-out dish. My desire for homemade was rekindled last year though when I made wings using a Peruvian seasoning that I got from Serious Eats. Those were damn tasty, but still not quite right, so I took another shot at this rotisserie staple and finally have a recipe I feel confident in sharing. 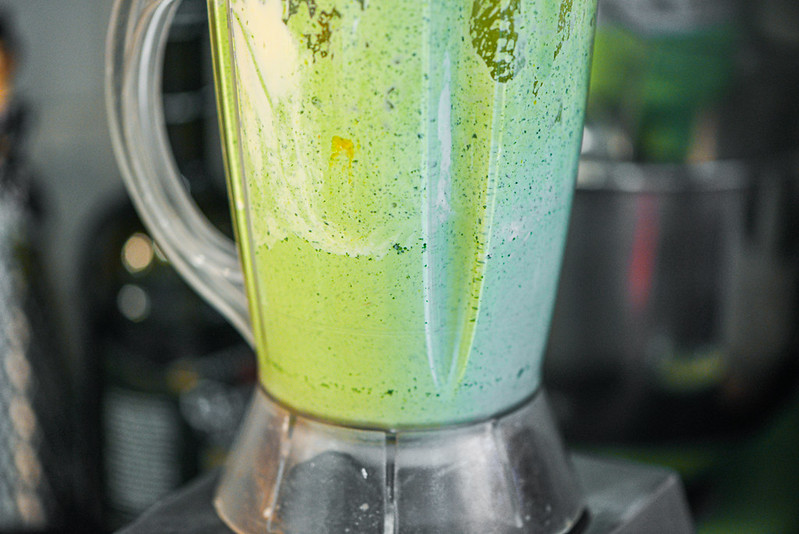 While Peruvian chicken is undoubtedly insanely delicious, I would be lying if I didn't admit I'm really in this dish for the ají verde. This spicy green sauce is up there as an all-time favorite condiment of mine, and it's luckily super easy to make at home. A hefty portion of cilantro gives this mayonnaise based sauce its green hue, while jalapeños provide the heat, and a ton of heat is warranted here so I use the peppers seeds and all and also keep extra on hand in case the usual two to three are not quite getting the sauce to its ideal spiciness. Beyond those primary ingredients, there's also a couple garlic cloves at work along with oil and vinegar and an ubiquitous Peruvian ingredient—ají amarillo paste, which can be found at most well stocked Latin markets. 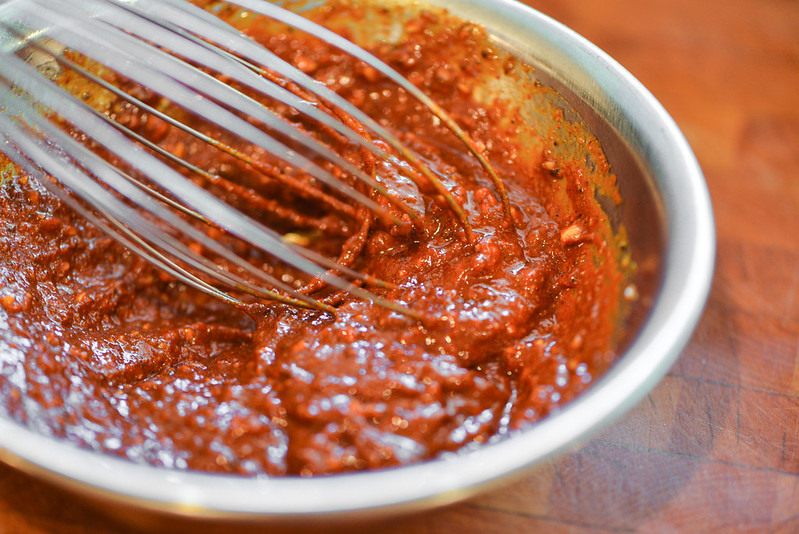 The ají verde wasn't where my previous recipes were falling short though, it was the chicken seasoning. The Serious Eats recipe got me pretty close, but tasted a tad light in the savory and citrusy departments. So to try to correct those this time around I swapped out vinegar for lime juice as the acid and added in a bit of soy sauce, which makes appearances in other Peruvian staples like lomo saltado. I also added in a bit of ají amarillo into the seasoning paste, which I hadn't tried out previously. 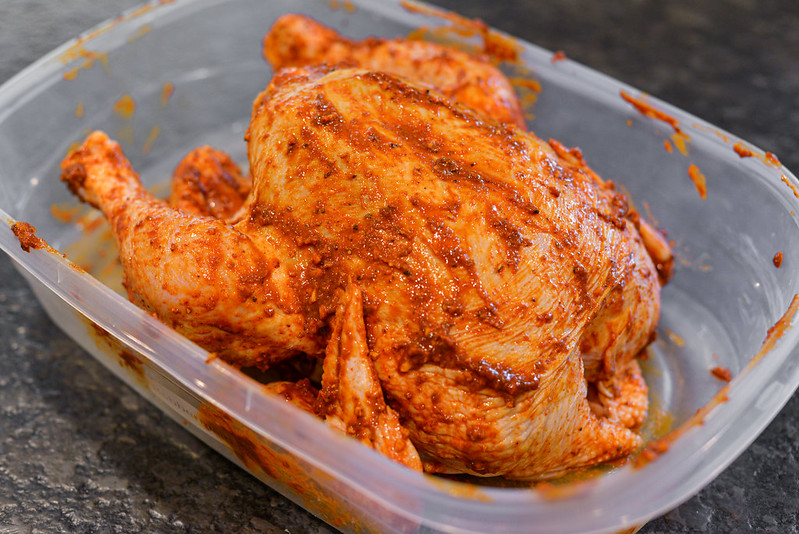 Once done, I spread the red mixture—it's hue being a product of the large amount of paprika—all over a chicken, inside and out. I tend to like birds on the small size for roasting, but a five-pounder was the smallest my grocery had in stock the day I went shopping, but that actually made me a little happy because I knew this would last at least two meals, maybe even three, in the end. 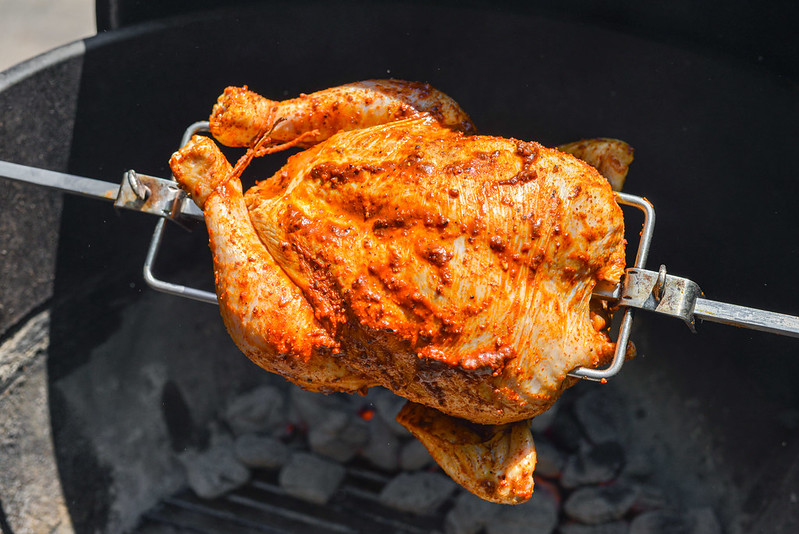 After lighting a full chimney of charcoal and spreading the lit coals into two equal piles on either side of the grate, I topped my grill with rotisserie ring, secured the bird on the spit, and set it in place and started the spinning. 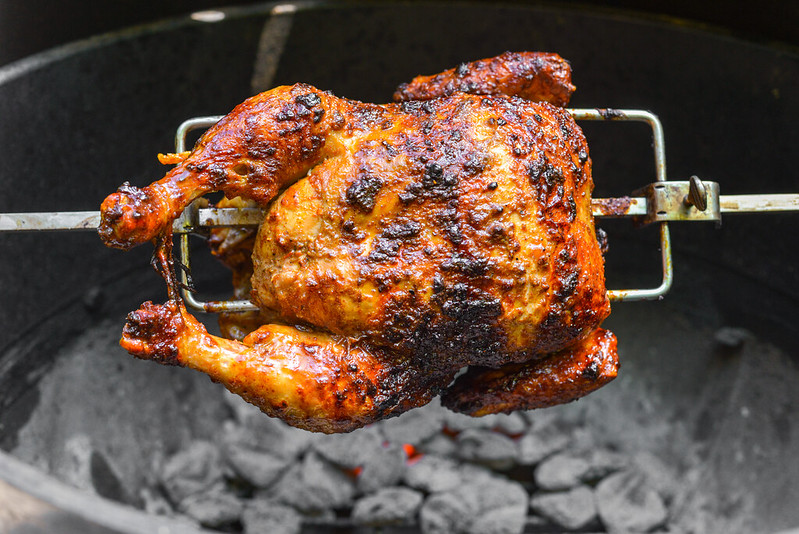 I kept peaking at the chicken as it slowly rotated, getting giddy at watching it turn deeply brown and glistening thanks to the bird basting in its own rendering fat. 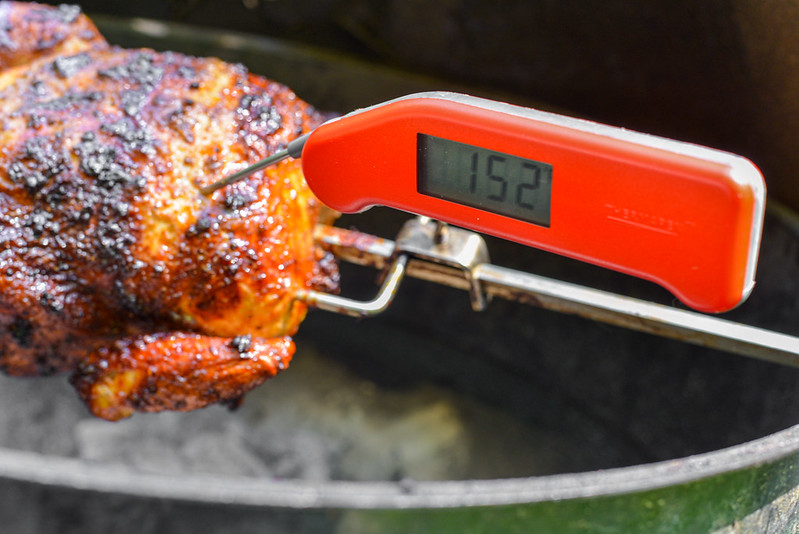 I was shooting for a temperature around 150°F in the breast, which the bird got to after about 45 minutes of cooking. 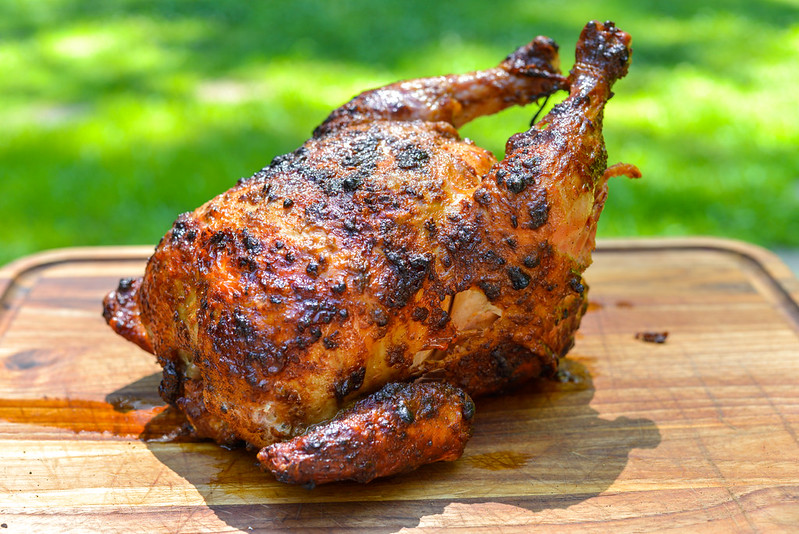 With chicken done, I transferred it to a cutting board, removed the spit, and let it rest for ten minutes. During this time I fried up a batch of maduros, which is one of my favorite sides for Peruvian chicken because the sweet plantains provide a good contrast to the spicy ají verde. 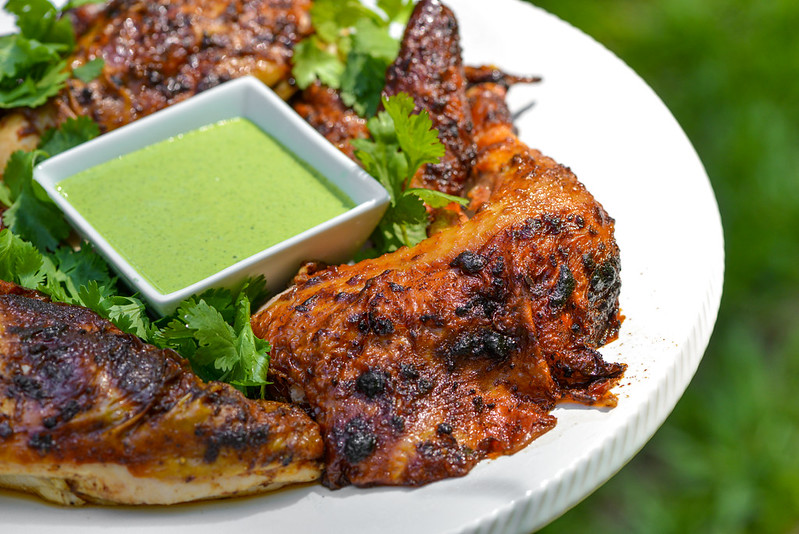 When it was time to eat, I quartered the chicken and served with the sauce, maduros, and white rice. There's an excellent local Peruvian chicken spot here in Durham called Alpaca, and this exact chicken and side combo from them has been a regular part of diet since moving to North Carolina, so I used that as a measure of my own success. For the first time, I had made a Peruvian chicken at home that gave me all the comfort and flavors of what I consider to be the some of the best. Like a rotisserie chicken should be, the meat was tender and incredibly juicy, but it's the skin with its earthy, citrusy, and savory qualities that really makes a Peruvian bird, and it certainly was delivering for me here. The only thing that could make that skin and meat any better was ají verde, and the one I had quickly put together was excellent, although I realized if I had added just one more jalapeño it would have more closely matched the intensity of heat I'm used to. So it may have taken ten years, but I'm finally able to give y'all a Peruvian chicken recipe that I'm totally proud of and am sure will give you equally satisfying results in your backyard. 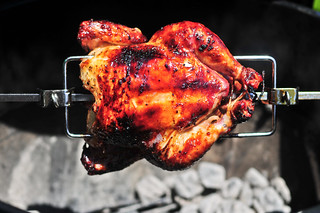 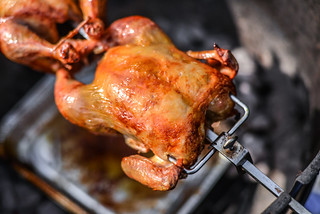 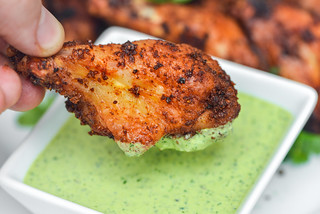