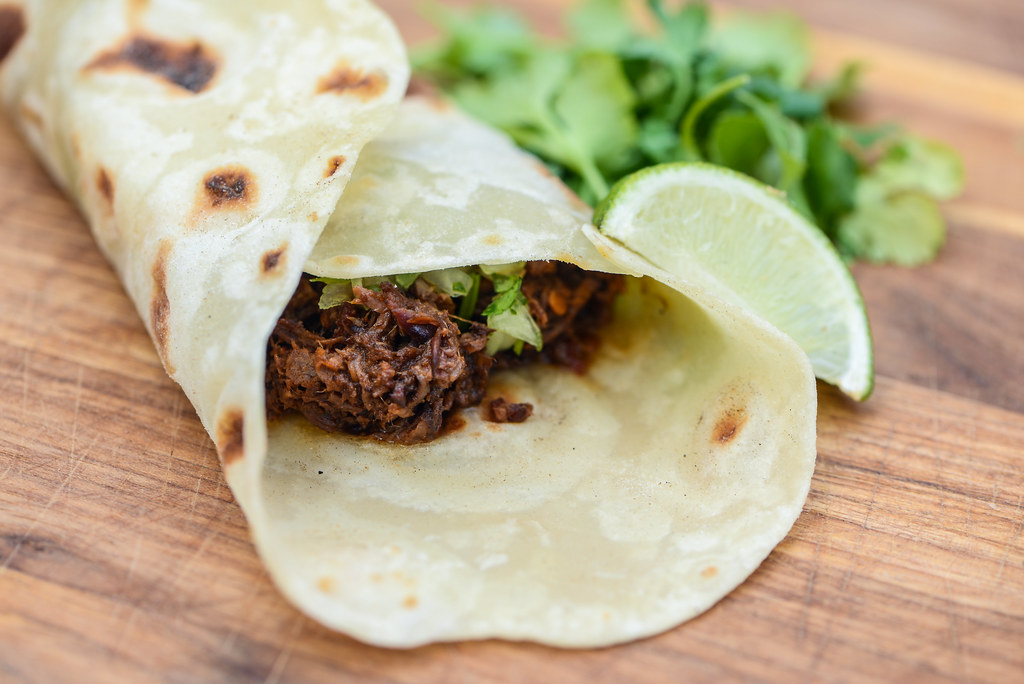 I don't really repeat recipes here unless I have a new technique or method that's worth replacing outdated content with. So its with a little hesitancy that I share this recipe for smoked beef barbacoa because in reality, it's the exact same recipe as a lamb barbacoa I made a few years back, just swapping out one protein for another. Still, the results were so good and different enough in flavor that I felt it deserved this second helping. 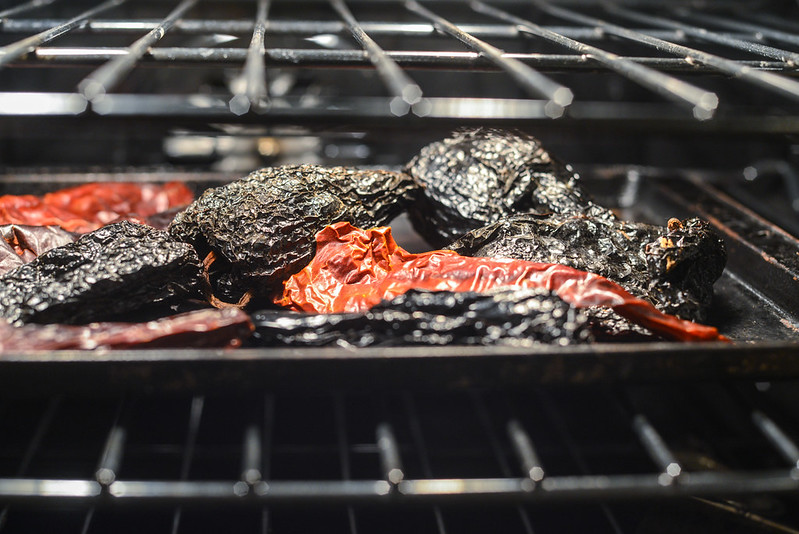 This recipe takes every opportunity to build in tremendous flavor, starting with the rub. I created a chili heavy spice mixture that I start off by toasted and grinding both ancho and guajillo chiles that combine to add notes of sweetness, smokiness, earthiness, and just a tad bit of heat. 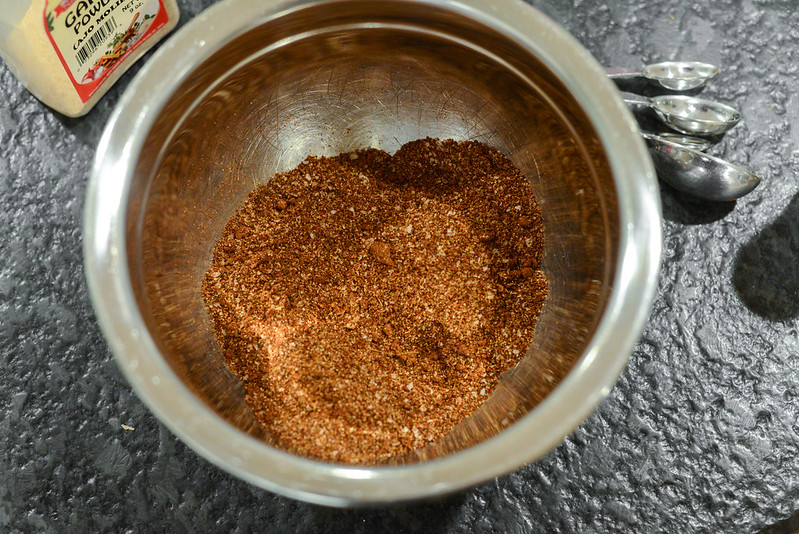 Built up around those two centerpieces are layers of Mexican-influenced flavors including oregano, cumin, garlic, onion, chipotle, cinnamon, and some brown sugar. This outputs a rub that has a chili powder-like base with a lot of added complexity to give it a more full flavor profile. 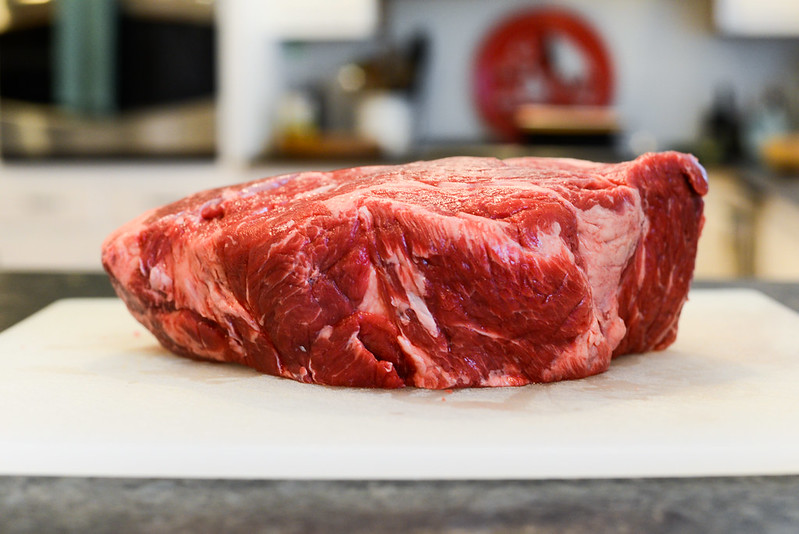 The one big change from my previous barbacoa is obviously the meat. I wanted a huge chunk of beef chuck here, which has the right amount of fat to hold up to a long cooking process, breaking down slowly over time to create a shreddable end product. Without a butcher to call my own yet, I wasn't sure where to find this and decided on the large Mexican market, where communication of what I was looking for became difficult when I discovered it was cleaning day and the meats were not out on display for me to point to. With some work and help from other customers, I procured a seven-pound monster piece of chuck, which I now know to call "carne para barbacoa" when ordering, something so blatantly obvious it evaded me at the time. 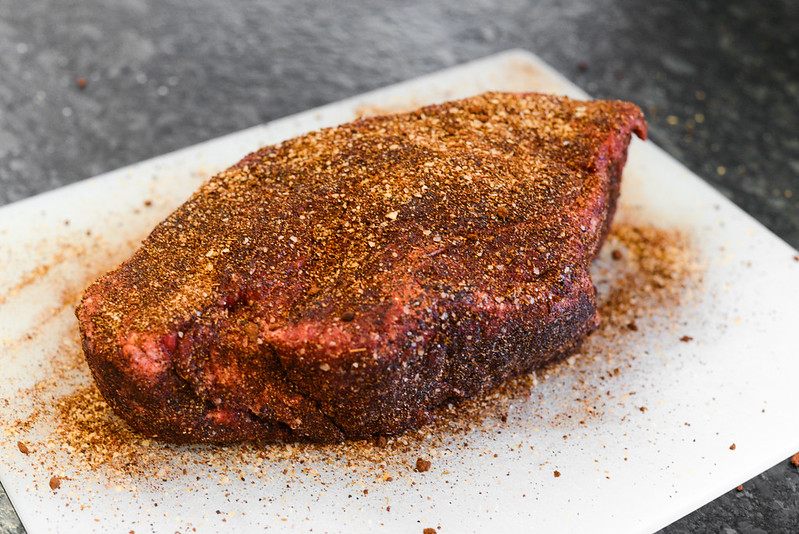 I generously coated this giant piece of beef in the rub, being thankful I made some extra to get the job done. Then I transferred it to the smoker, which I had running at 250°F with a few chunks of hickory to impart a fairly robust smoke flavor against the strong beef. 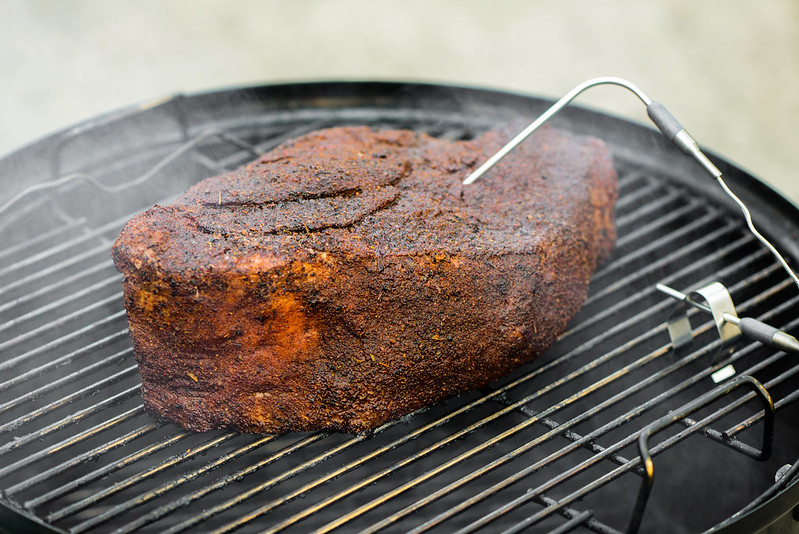 My goal here wasn't to smoke to doneness, but to cook it long enough to impart a good smokiness. Most of the smoke flavor is absorbed in the first few hours of cooking, so three hours was all I thought I needed in the smoker to get what I was after. 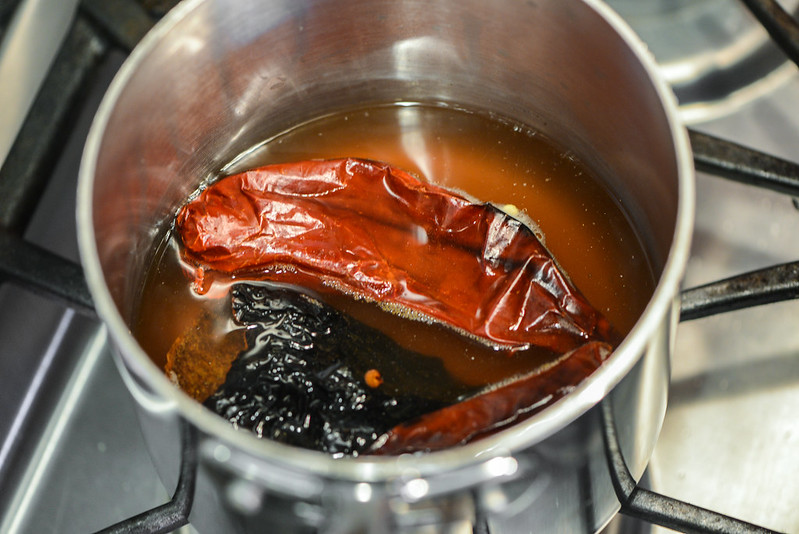 The smoke portion of the recipe left me ample time to make the sauce, which is no quick proposition itself. Just like everything in this recipe, the sauce is designed for flavor, not time savings, which is a boon in the end. The sauce began with soaking an ancho and guajillo pepper until completely softened. 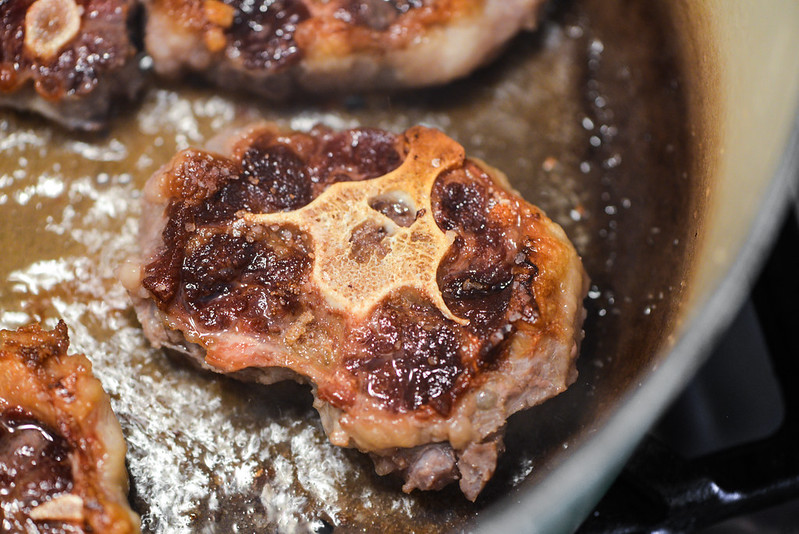 The came the searing of oxtails. This is another departure from the lamb barbacoa, but part of the original inspiration from J. Kenji Lopez-Alt. The idea here is that since chuck is not seared itself, the oxtails delver that important flavor element. I hadn't done it for the lamb previously because I figured the flavor of that meat was so strong and distinct, it didn't really need any additional help. 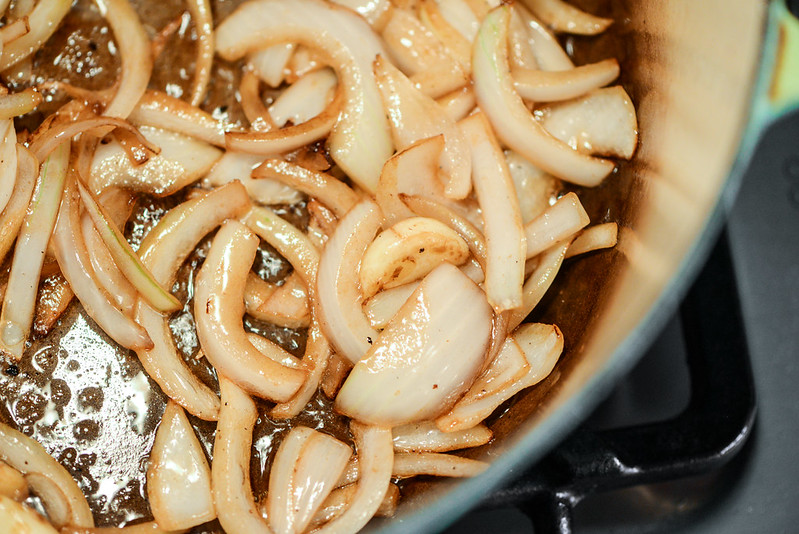 After the oxtails were well seared, I cooked a sliced white onion and garlic until they turned golden, followed by oregano, cumin, ground cloves, and cinnamon until fragrant—by now my kitchen was smelling pretty awesome. 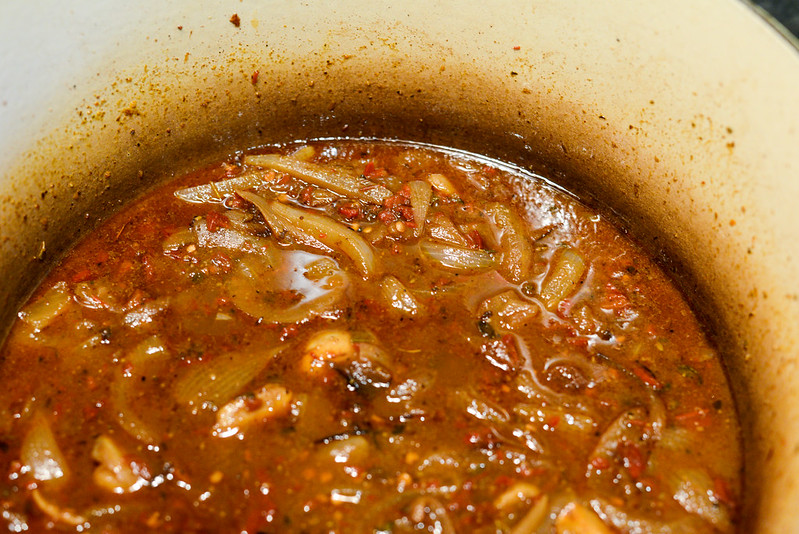 I then added in chicken stock, vinegar, and chipotles and simmered the entire mixture for twenty minutes, in which time the liquid reduced by half, thickening up enough to coat a spoon. 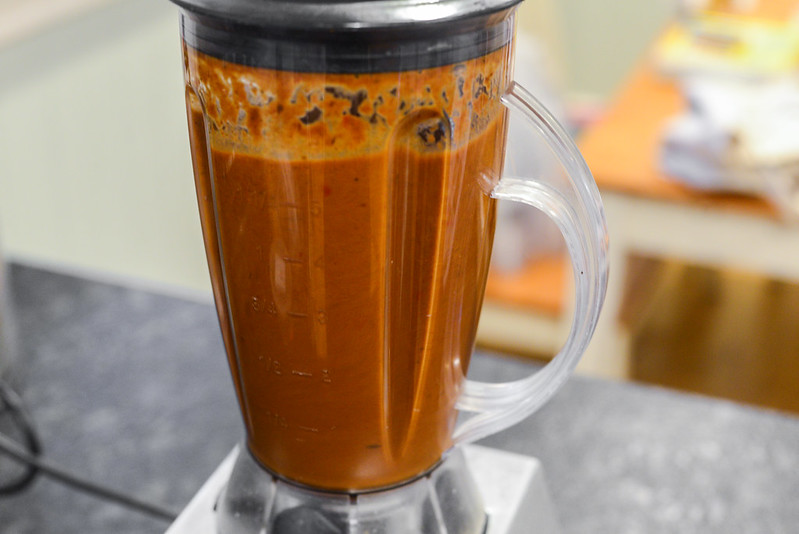 Then a quick stint in the blender along with the soaked chilies and their soaking liquid finished up the sauce, ending with an intense earthy chili flavor with a faint smokiness and heat, which came mainly thanks to the chipotles. 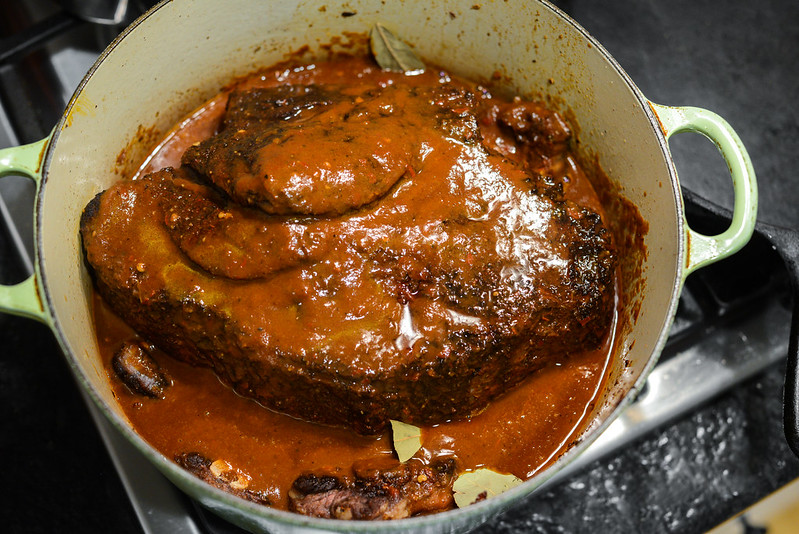 When the three hours in the smoker were up, I transferred the beef to my dutch oven, added in the oxtails, and then poured on the sauce. I then set the entire thing in a 250°F with the lid slightly ajar and let it cook until completely tender. This part can be done in the smoker too, but I had swapped the beef for other items there, making the oven the ideal, and easier, method to finish up the cook. 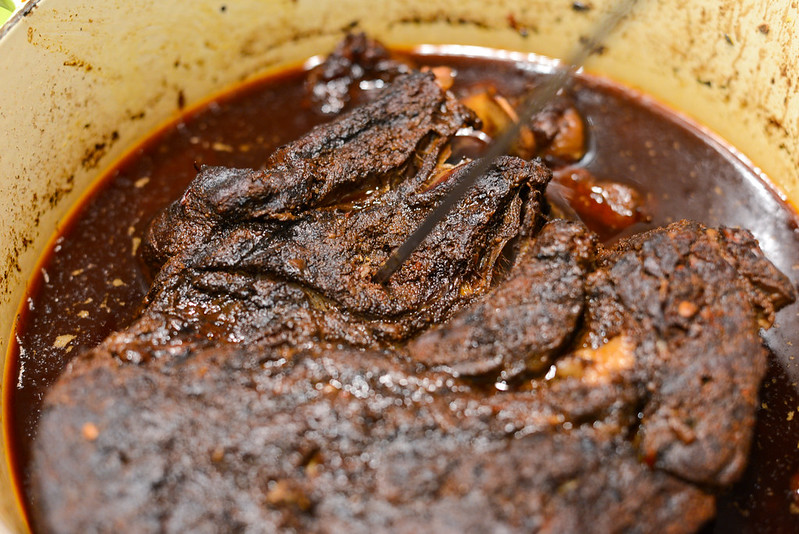 It took a little over three hours until the beef reached a state where I could pierce it with a skewer with almost no resistance. At this point, it's done and can be pulled and served, but the meat becomes more tender and the flavor even better if you let the whole thing rest at least overnight in the fridge. 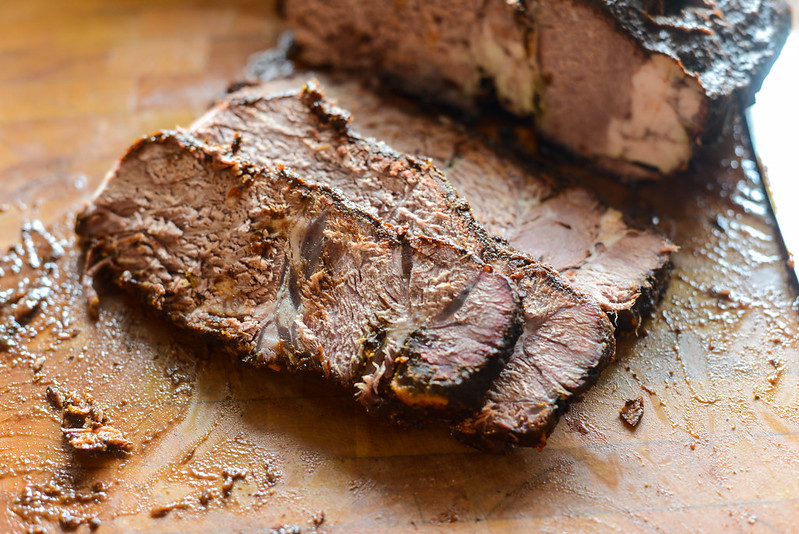 Once cool the next day, the meat was too firm to shred or pull, so I cut the chuck into slices about 1/2 and inch thick against the grain, thinking this would make ideal sized shreds of beef once the meat heated up and started breaking apart. 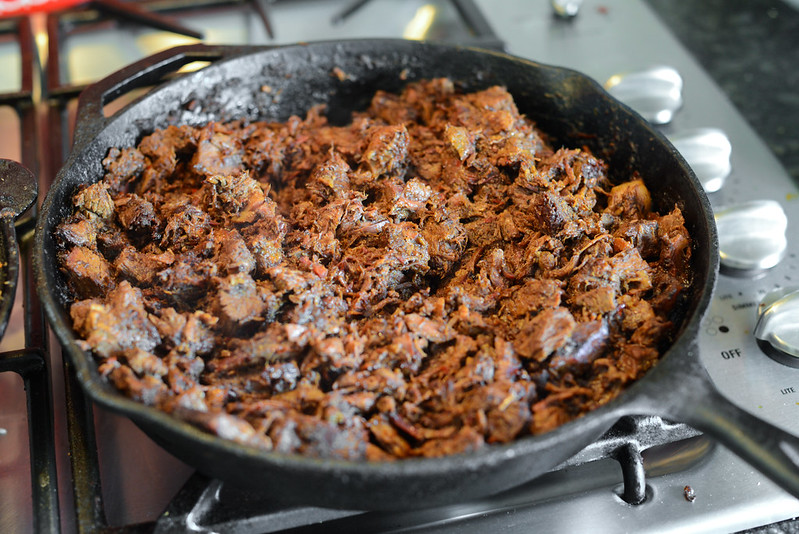 In the reheating stage, I failed to take a proper photo, so your stuck with this image with horrible color balance and before the beef was fully warmed through and broken down. 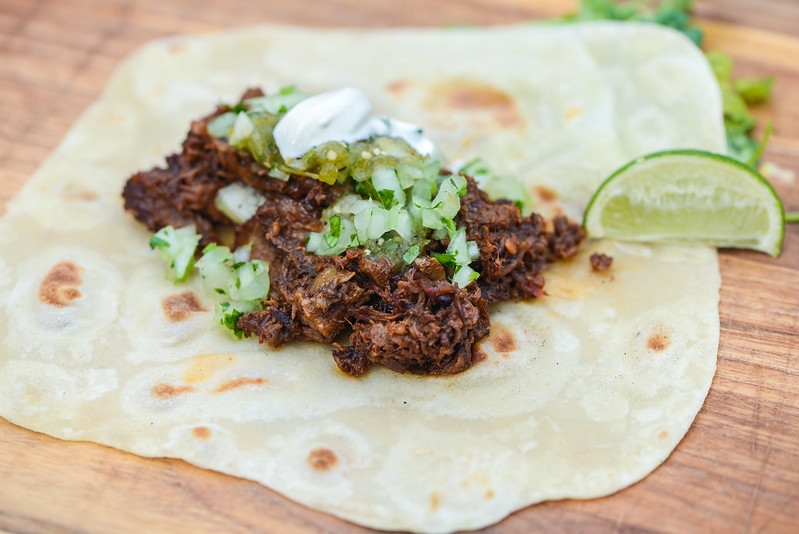 But you can see what the end result looked like here—super tender small shreds of delicious beef. Delicious is a bit of an understatement as this barbacoa had hugely immense flavor. The chuck alone brought a big wave of beefiness, but all the spices and sauce added an intensity of earthy chilies that paired great with the meat and got even better with the addition of the background smokiness and heat. To add to the overall excellence, I enjoyed the barbacoa stuffed into my homemade lard-laden flour tortillas and topped with onions, cilantro, and salsa verde. I can't say this recipe doesn't come without its work, but the fact that it's so good that I've not only made it multiple times, but decided to share almost the same recipe twice stands as a testament to how incredible this barbacoa is. 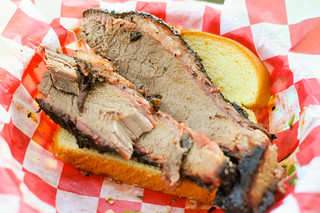 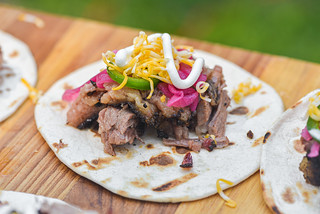