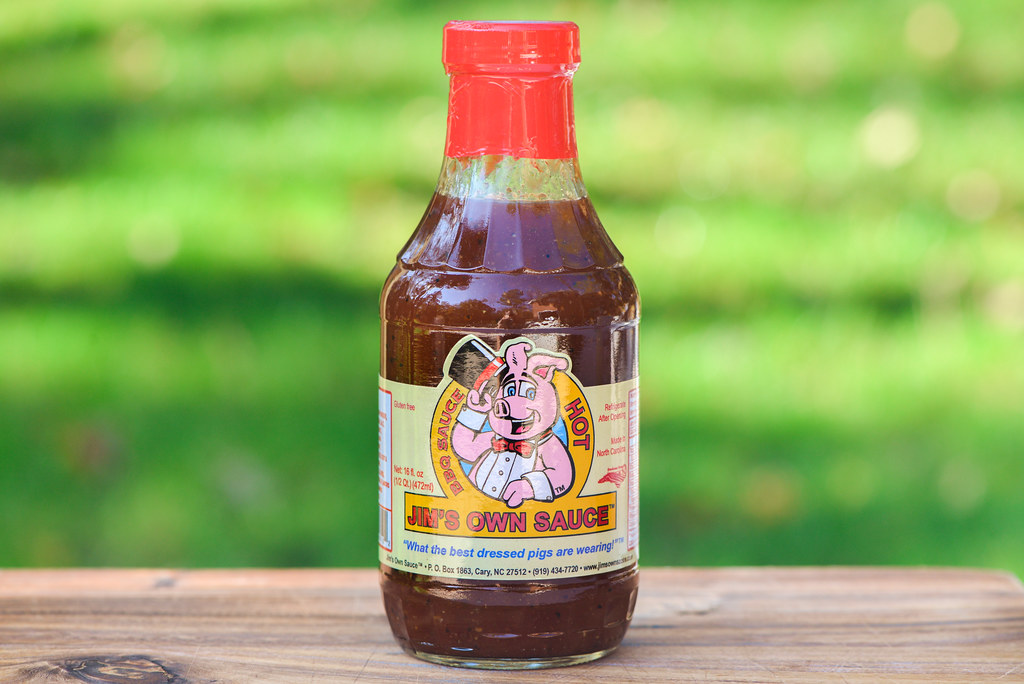 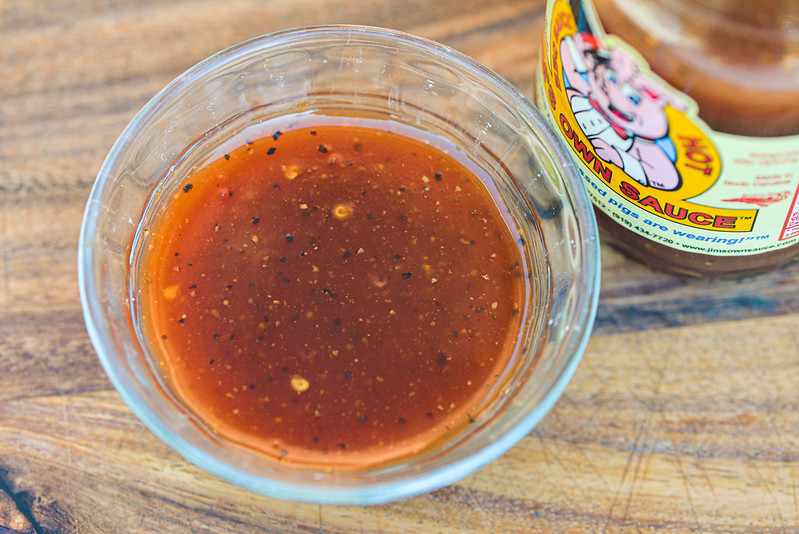 It's Jim Arnold's wife Amy who gets the credit for the real birth of the Jim's Own brand—in 1997 she brought some of her husband's ribs into work and there was a lot of praise for the sauce that adorned them. One of those colleagues was so fond of the sauce that he turned around and ordered 40 gallons of it. Jim, a teacher in Durham, NC, had been running a small sauce operation based on his Mom's recipes out of his home, but after that initial push, he transitioned into the sauce business full-time. Jim unfortunately lost his wife due to an illness in 2010, and following that he sold his business to Willem and Marilene van Schalkwyk, owners of Gentlewoods Food, Inc. based in Cary, NC. The couple have continued to cary on the Jim's Own brand which currently has six unique sauces along with many rubs and seasonings.

A strong vinegar tartness with an equally hefty peppery heat are the first things to have a presence in the aroma. While those two elements are dominant, there's enough sugary ketchup hanging out just behind them to hint at a sweet fruitiness at work as well. With a deeper whiff, a distinct Worcestershire complexity comes into focus along with the tell tale fruity character of habanero peppers, giving the ability to add direct classification to the heat.

This red-orange sauce's light hue and semi-transparency makes it super easy to see a plethora of spices that come in all different sizes and red, orange, black, and white specs. The sauce also has a glossy sheen along with a thin and watery consistency, which has it falling in a very fast, even pour off of a suspended spoon. Right at the end, the sauce stream changes to a few quick drips and then stops, leaving only a very thin coating of sauce left clinging to the silverware.

For all the tang and heat in the aroma, the initial taste of the sauce is surprisingly sweet. A sugary start mixes with tomato quickly to form a ketchup-like flavor that doesn't take long to be balanced out by vinegar. As the tartness starts, the Worcestershire does partial work at building barbecue complexity, with the rest of that equation happening via the spices. At first, it's a little bit of onion and a black pepper bite at work, then, as the sauce begins to exit the mouth, those habaneros take over and start a lip tingling and fruity heat that's enhanced by a ramp up in the vinegar too. This leaves an aftertaste that is strongly acidic and spicy, but there's enough sweet tomato still remaining to hold the entire barbecue profile together. 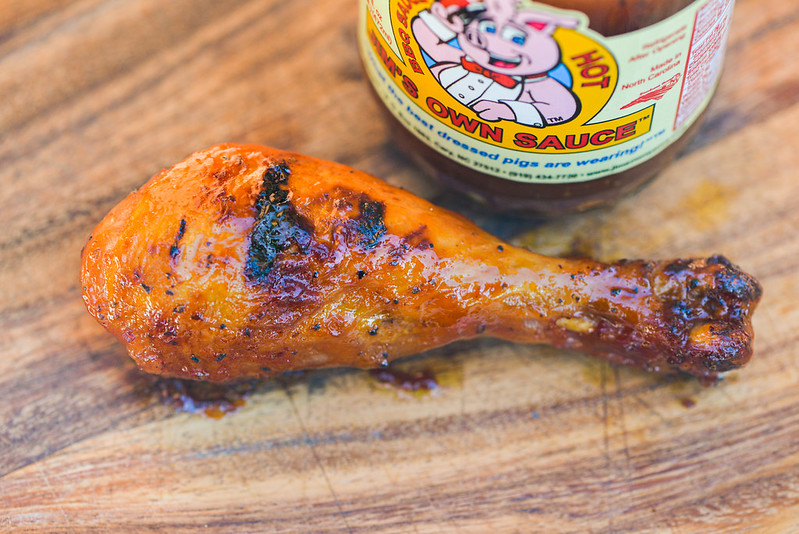 This sauce coated the chicken in a thin and even layer that baked down very well over indirect heat. The hue was very light at first, but it picked up a decent orange color with subsequent brushings. When moved to direct heat, there was attractive caramelization with no burning or sauce loss. The flavor remained pretty much the same as out of the jar except for a slight bump up in the sweetness. For the first few bites, this created a very pleasing sweet, tangy, and savory barbecue flavor, but then the heat and a little more tartness came in and provided a contrasting bite. It wasn't until the leg was done that the heat really reached a tongue tingling level, although that burn was not quite as strong as it was in the raw state.

I'm not sure why it took me so long to try out a Jim's Own Sauce—I've seen them on shelves since moving to Durham and there's multiple flavor variations, something I consider a plus when I'm on the lookout to expand my sauce reviews. I think it may have been because the watery appearance made me think this was going to be another standard North Carolina vinegar sauce that has a more singular usage, but I was left pleasantly surprised that, thanks to just enough ketchup, this is definitely more of an all-purpose sauce. I'm not sure if it's the fact that all my most recent "hot" barbecue sauces didn't quite hit the spot for me, or if this is truly in the top tier of sauces, but I was really loving how this was working on my taste buds. Despite a strong vinegar base, the sauce still delivered a full suite of flavor progressions from sweet to tangy to savory to spicy, all tasting quality and in harmony with each other. The heat was strong, but not overboard in a way that most people couldn't enjoy this sauce. I often end up recommending thinner, vinegar sauces for usage in their raw state, but this sauce also worked very well on the grill, and I think it's well suited to take most all grilled or smoked meats to the next level—you just may need an extra brushing or two when cooking to build up that ideal sauce layer.