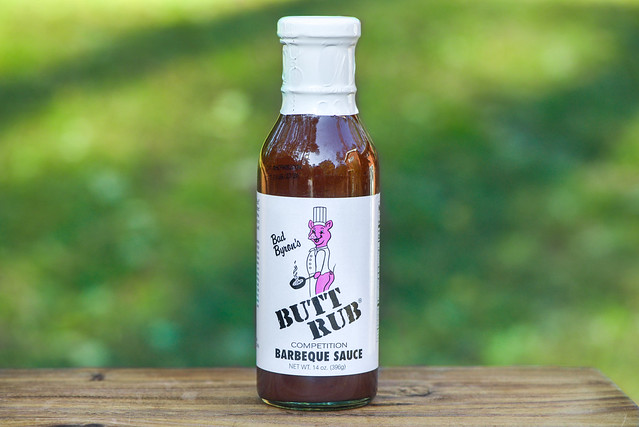 A bright, sweet tomato base is contrasted by an equal amount of tang and then backed up with Worcestershire, garlic, onion, and peppers to create a well balanced and crowd pleasing barbecue flavor. 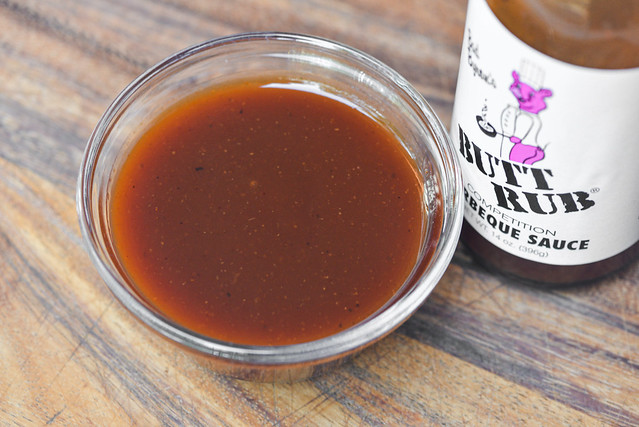 Byron Chism's barbecue story is reversed from the usual tale. While most folks start out with backyard cooking, then move on to competition, and then start selling their sauces and rubs, Byron actually created Butt Rub first in 1997 based on knowledge from his Texas roots and skills acquired at the Culinary Institute of America. His neighbor in Santa Rosa Beach, Florida helped further his love for smoking and grilling meats, and after getting Butt Rub into its first store, Byron then began competing as a way to help market his products. Between 2000-2007, Byron was honored by being in the top 10 KCBS cooks each year, and with those accolades, along with TV exposure, he's continued to successfully find a market for his rub and sauce.

A familiar tomato ketchup aroma fills the nose on first whiff of the sauce. Along with that fruitiness that has an amped up sweetness, there's an almost as strong, contrasting vinegar tang that cements the barbecue profile which is then further rounded out by complex Worcestershire and earthy peppers. Those peppers have a hint of heat that struggles to come out from behind the sugar, and there's a similar story for onion and garlic, which are there, but very light in the aroma.

This rusty orange sauce has a glossy sheen and is very smooth. It's semi-opaque, making it easy to see lots of spices in small black and white specs. The sauce runs medium-thin in thickness with a syrupy consistancy, which leaves it falling in a fast and even pour off a suspended spoon. It doesn't take long for the sauce stream to switch to fast drips and then transition to two or three slow ones before ceasing and leaving a thin layer of sauce left clinging to the silverware.

Just like with the aroma, the first taste of this sauce is a balance between sugar, sweet tomato, and vinegar. All three come in at the same time, but as the sauce settles on the tongue, more complexity builds first by way of a distinct Worcestershire flavor followed by background notes of garlic and onion. Next, the vinegar increases its presence, while the onion does the same, and the earthiness of the pepper works its way in. A little sweetness remains to give contrast to an even more prominent tang and medium heat that dominates the final notes and aftertaste. 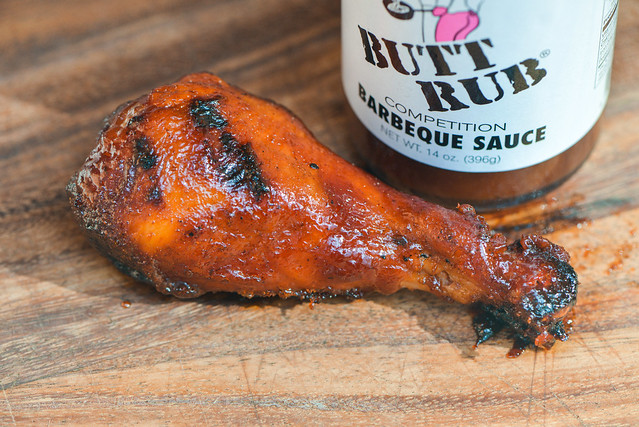 This sauce coated the chicken in a thin, even layer that baked down very well over indirect heat. Then, when moved directly over the coals, there was some nice caramelization with no burning and almost no sauce loss. The first few bites of the chicken brought with it a pleasing bright and tangy sweet tomato flavor that was in step with what was tasted out of the jar. With some subsequent bites, a little of that extra complexity from the Worcestershire and spices built up, but it remained more understated than it was in its raw form. The most notable difference in the sauce after being cooked were the caramelized bits, which added pockets of intense sweetness and tang.

When a bottle of barbecue sauce is labeled as "Competition," I'm expecting a strong wave of sweetness and a thick, syrupy consistancy that all combine to create that shiny and sweet piece of meat that judges love. This sauce delivered something a bit different though, and I think that speaks to its creator's path fo developing recipes for the backyard first over competition. Those common competition traits are there, but aren't as overdone as the average competition sauce, which allows more complexity from other ingredients to come through as well as makes the sauce more versatile and better suited for the common cookout. You're not going to be taken anywhere special in terms of flavor here, but you'll get a very crowd pleasing barbecue profile whose quality and brightness are many steps above your standard supermarket sauce and can handle lots of different applications both on and off the grill.