A Sea of Excuses & One Great Brisket 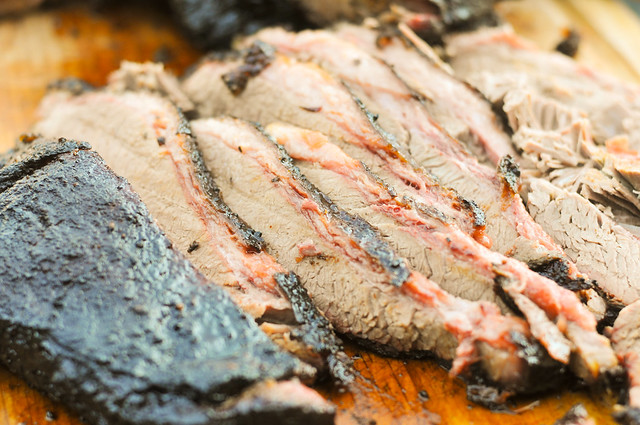 The seventh season of the Meatwave just ended, and looking back at the years of good times and great meats, there's one big hole in my repertoire that never ceases to be an embarrassment, barbecue brisket. In all the time I've been smoking, through the countless racks of ribs and pork putts, the photo above represents only the second brisket I've ever tackled. The reasons behind this are numerous, but there's no excuse that can truly do justice for the shame of admitting that one of my favorite barbecue foods is also my least seldom made. The years of barbecue have at least brought some quick brisket success my way though; even though this brisket was still a learning experience, it stood head and shoulders over my first, which was pretty decent to begin with. 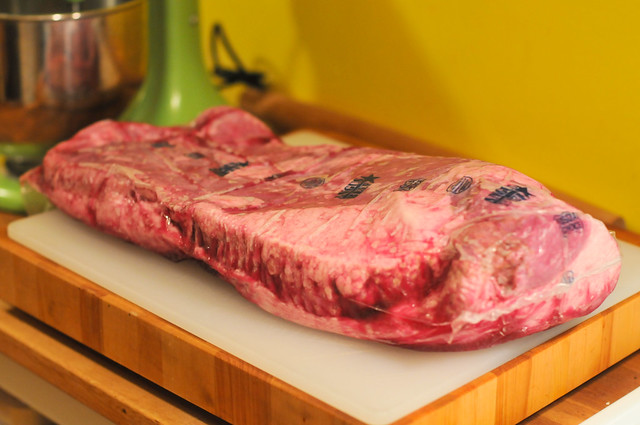 Ok, so here starts my lame ass excuses for not cooking brisket, starting with investment. A full, 12-14 lb packer brisket comes in at about the same price as three pork shoulders or four racks of spare ribs at my local butcher, and while brisket is a great bargain per pound, I've always felt the financial risk behind the pork products far easier to swallow, especially knowing that brisket poses a bigger challenge to perfection. So it wasn't until I was able to suck up the cost of picking up a whole brisket along with a few racks of ribs as a fallback in case of a brisket disaster, did I finally venture into the beefy wilderness. 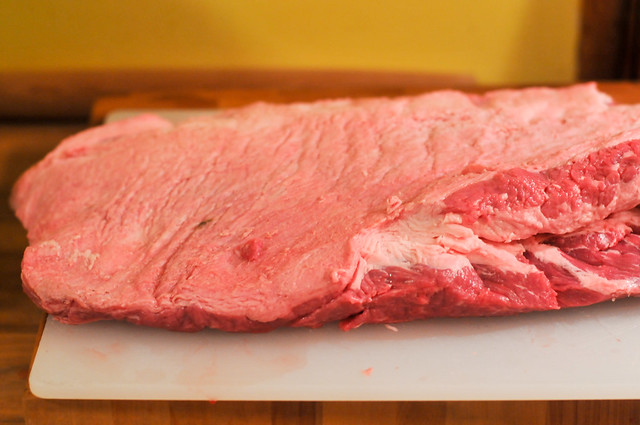 Once I had the brisket in at home, it was time to learn how to prepare this monster piece of meat. The first time around I trimmed up the top layer of fat to a nice 1/4-inch thickness well enough, but almost completely separated the point and flat trying to carve out some of the excess fat between the two pieces. With my second brisket, trimming went a lot smoother and I was almost completely satisfied with my ability, save a few places where I accidentally cut down to the meat. 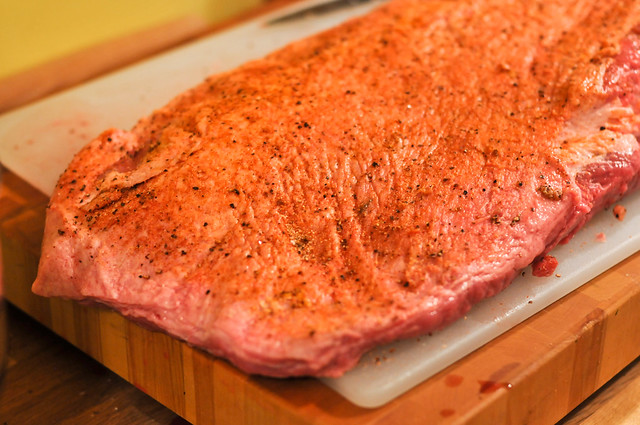 Another folly on the first go round was the rub. Since starting barbecuing, I've always preached and practiced making your own rub, but a few years back I had a few extra dollars left while at the Big Apple Barbecue Block Party, and picked up a package of beef rub from Southside Market after falling in love with their hot links and brisket. Seeing as they were beef experts in my mind, I used that rub on the brisket, and low-and-behold, as soon as I go against my own mantra, things fell apart.

The rub was primarily salt, leaving the bark salty beyond belief (at least for my taste, my salt lovin' wife thought it was just fine and dandy). Learning from that, I went with a simple, more balanced rub I concocted from salt, pepper, paprika, and cayenne this time, and coated the brisket a little more lightly than I would normally for ribs or pork butts as extra insurance against over seasoning. 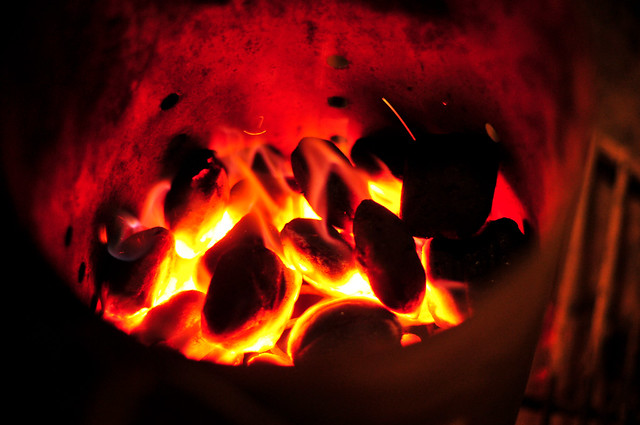 Ready for the next excuse for not doing brisket before—this is the lamest of them all—the length of the cook. With the Meatwave starting at 2pm and brisket taking around 16-18 hours to smoke, an overnight cook was a must. Prior to moving to my current residence, I had an incredibly nosy neighbor who was convinced I was going to burn down the neighborhood every time I fired up the smoker, and who gave me an especially hard time whenever I let it go overnight. Her craziness sparked paranoia in me, so I tried to keep that hassle to minimum and created a mental block where a 12-14 hour overnight cook for pork shoulders was fine, but a brisket was just asking for more trouble than it's worth. Luckily, my new neighbors are much more supportive (a few ribs here and there helped that along) and long, overnight cooks no longer give me any pause. 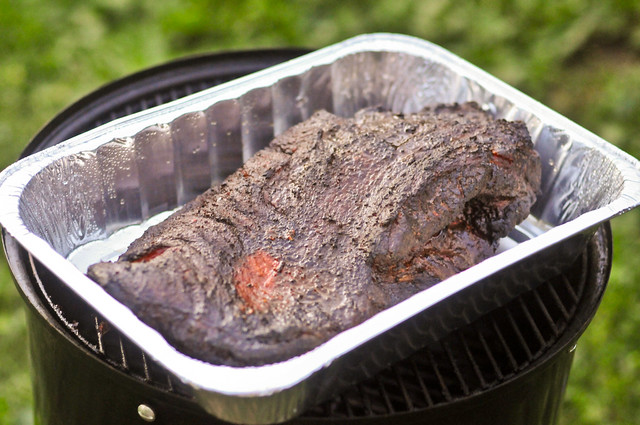 If I had only known a brisket could cook shorter and turn out great, maybe I would have gotten over that idiotic hurdle before relocating. See, my first brisket took a full 16 hours to cook, but for some reason, when I woke up at 6:30am to check on this, it had already reached the 195 degrees I was shooting for in a mere 10 1/2 hours. I still don't know how this happened—perhaps the smoker ran hot through the night—but I totally freaked and thought my fears of ruining an expensive piece of meat had come to fruition. I quickly took it off the smoker (I didn't remember to snap a photo until it was already in its transport vessel seen above), wrapped it in a couple layers of foil, then popped it into a cooler to keep warm. 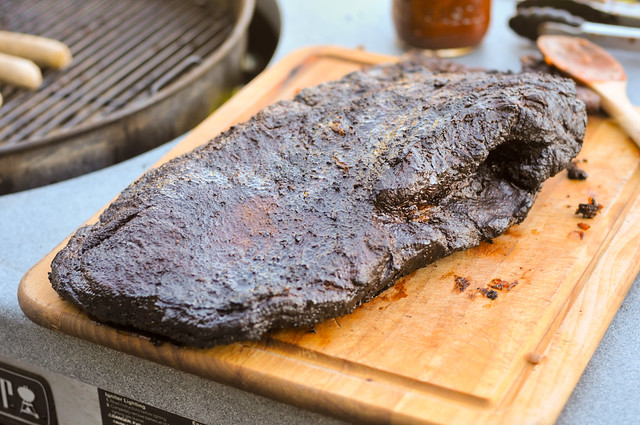 With over seven hours between the time the brisket was pulled and guests arrived, my day went from what was supposed to be pampering a smoking brisket to making sure a finished brisket stayed above 140 degrees until the time came to slice. Although the foil/cooler combination mostly did the trick, there was a little time near the end where I had to pop this big beauty into a warm oven to maintain temp. Once a critical mass arrived, I unwrapped it to find a stunning, glistening bark, covering a piece of meat calling to be to be devoured. 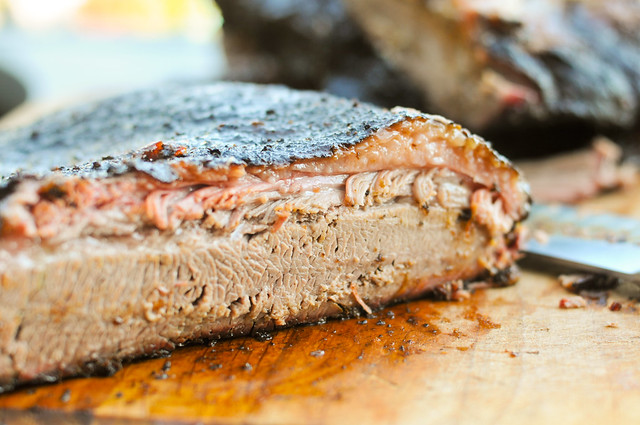 I learned the hard way that brisket can dry out pretty fast after sliced, especially in the cool fall air. To avoid ending up with a similar cold and dry brisket as happened before, I only sliced off what was going to be eaten at any given time, then wrapped the brisket back up and stored it in the cooler during the times in between. Sure enough, this solved the problem with dried out brisket, as everyone got juicy, freshly sliced pieces whenever they were ready to stuff themselves silly. 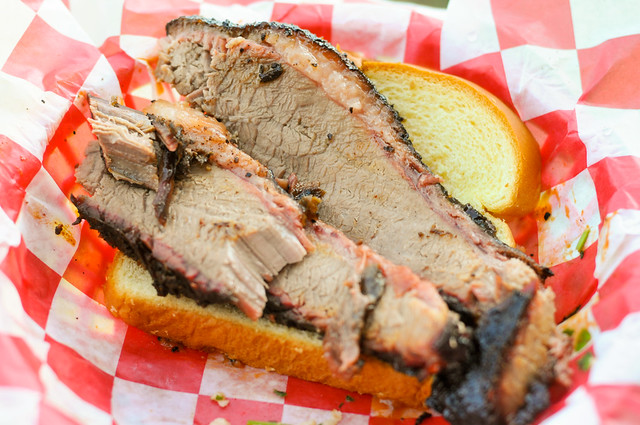 And here's the final product, a brisket that was tender, juicy, smoky and overall just delicious and a joy to eat. Despite my seeming success here, this brisket was still a far cry from the best of the best I enjoy on my trips down to Texas, but now that I've laid my brisket hang-ups to rest and realized that I can produce a decent side of beef, there's sure to be way more brisket down the road. One day I hope it becomes as second-nature as the ribs and pulled pork I've come to rely on as shining examples of my many years of work in honing some serious barbecue skills.

1 whole, untrimmed beef brisket
About 8 large chunks of smoking wood (I like a mix of oak and apple)

1. In a small bowl, mix together the salt, black pepper, paprika, and cayenne to make the rub. Set aside.

2. Trim the brisket of hard and excess fat, leaving 1/4-inch layer of fat along the top. Trim some of the fat between the point and flat sections, making sure not to remove so much that the two pieces separate. Sprinkle the entire brisket with the rub, patting it down to ensure adherence. Wrap the brisket in heavy duty aluminum foil, place in the refrigerator and let it sit for 2 hours and up to one day.

3. Remove the brisket from the fridge while you start the smoker. If using a Weber Smokey Mountain, light using the Minion Method with about 8 large wood chunks. Unwrap the brisket and place it in the smoker and cook at 225 degrees until an instant read thermometer reads 195 degrees in the flat section of the brisket. Figure about 1 1/2 hours per pound of brisket, but it can take longer or shorter than that.

4. Remove the brisket from the smoker and wrap in heavy duty aluminum foil and let rest for at least 30 minutes. Unwrap the brisket, separate the point and flat sections, then cut into 1/4 to 1/2-inch thick slices against the grain of the meat and serve immediately.