The Most Divine Swine 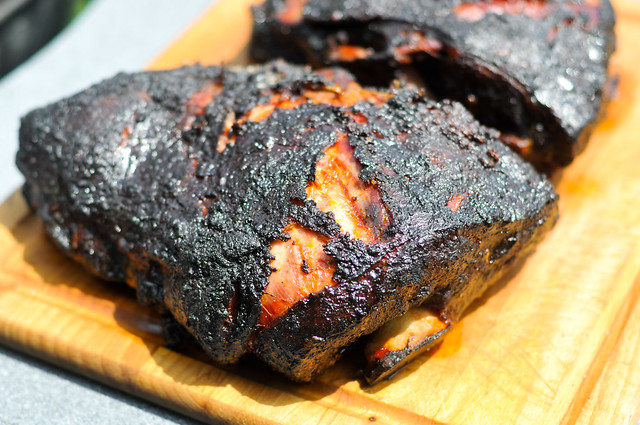 Compared to ribs, pulled pork didn't take me long to get it to a place I was happy with. In just about one and half Meatwave seasons, I felt my recipe for a smoked pork butt was pretty top notch. I actually preferred my homemade pork to most I got in restaurants and at the Big Apple BBQ Block Party, with one big exception, Big Bob Gibson's. To this day, I have not eaten a barbecued pork shoulder that is as juicy, tender, and flavorful as the ones that pitmaster Chris Lilly churns out. I figured that I could never match such a seasoned pro, and was perfectly fine with my own pork, so never bothered trying to match it.

Having a chance to sit down and talk swine with Chris Lilly the day prior to this year's Block Party, then getting some pork making tips the following day, and having eaten another one of his fantastic sandwiches, I thought I really should be shooting for the stars and decided to amp up my pulled pork game. After this resolve, was there any place else to start except for the recipe that I aspire to? 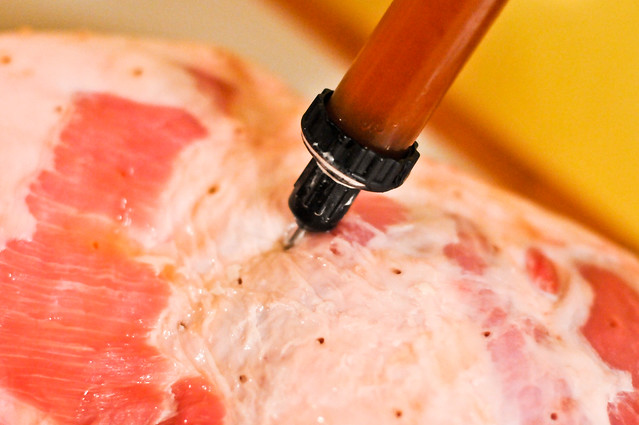 Where I start with a molasses-based brine for my pulled pork, Chris Lilly takes to an injection method—he said to think of it as a "quicky brine." Flavored primarily with apple juice, the liquid gets injected all over the pork butt, filling it with as much juice as it can take. Although I found something satisfying with my original recipe taking nearly two days from start to finish due to the 12 hour brine, there was something even more satisfying about taking a big needle to a massive hunk of meat—like payback for all those doctors visits. 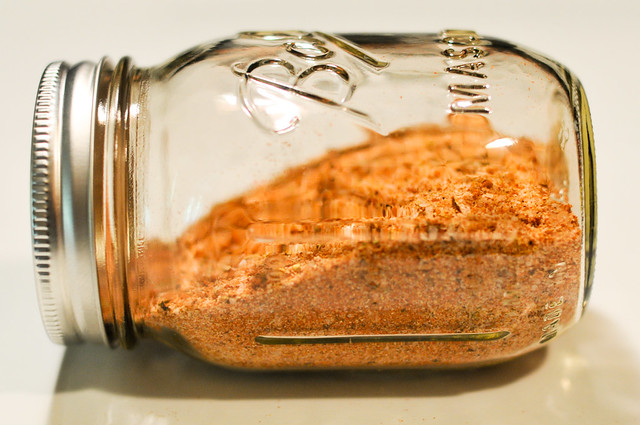 With the pork thoroughly injected, the rub can be applied right away. I tend to like my rubs on the spicy side, so the recipe for a more sugary one gave me pause. I definitely didn't want a pork that was overly sweet, but I also wanted to follow the recipe as closely as possible. I went with it and prayed for the best in the end, also knowing that the chili powder I make packs way more heat than what you get off the shelf. 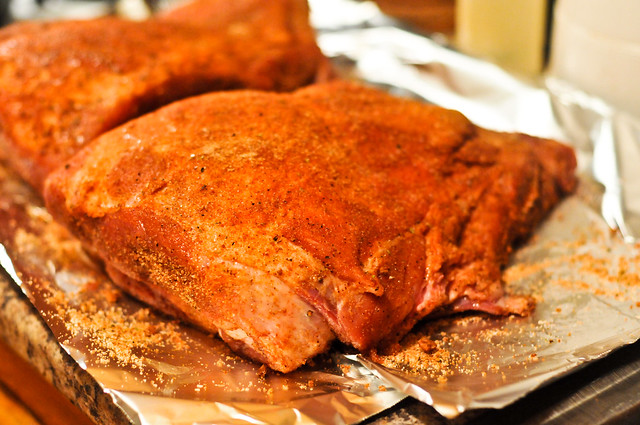 Although the original recipe called for the pork going straight onto the smoker, and there's great worth in a pork butt prep that only takes a few minutes, I have not had a piece of rubbed meat that hasn't improved with an overnight stay in the fridge. I foiled up my two beautiful butts and gave them a rest to absorb some of the flavors of the rub. 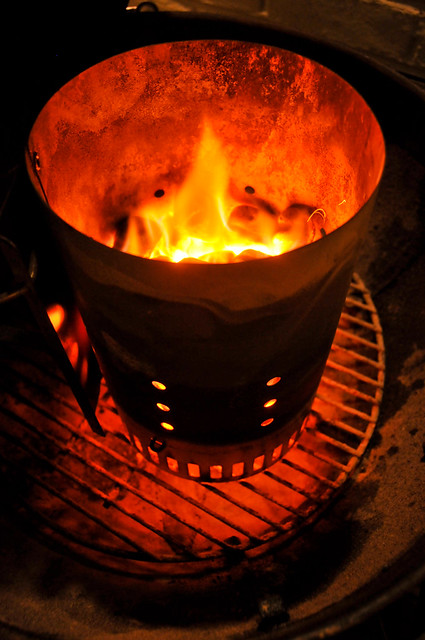 The next day couldn't have come soon enough—it was finally to cook! Needing the butts done at 2pm for Carne-val, I had to get them into the smoker by 10pm the night before. So a few dozen coals were lit around 9:30pm and, using the minion method on my Weber bullet, I had the pork in right on time. It only took about an hour for the smoker to reach 225, and there it stayed, steady for the entire cook, emitting the sweet smell produced by a combination of oak and apple woods. 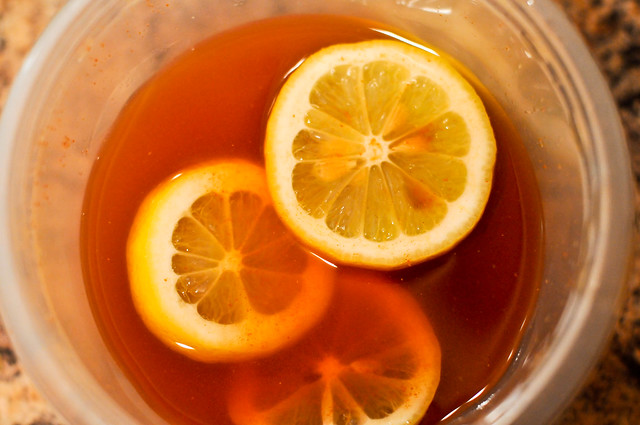 In the last few hours of the cook, Chris Lilly applies a vinegar sauce to the pork every hour. This represented a 180 to my usual apple juice spray with a spicy rub, turning it over and using a spicy mop on a sweet rub instead. The mop sauce is a simple mixture of vinegar, cayenne, salt, and lemon slices, and according to his book, was kept a secret until recently. 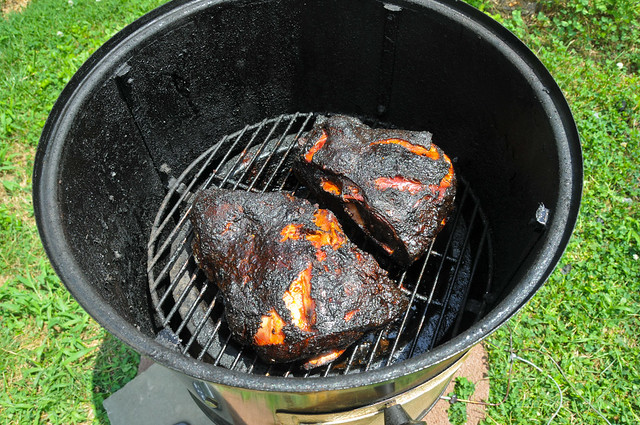 Almost like clockwork, the pork hit 195 degrees and was ready to come out of the smoker 16 hours later. Although I had been mopping them, it wasn't until they were done that I took a good long stare and marveled at their beauty. The bark was amazing, nice and thick with cracks exposing the juicy meat below. Despite my best efforts to keep them whole, they were so tender that they started to fall apart during removal. 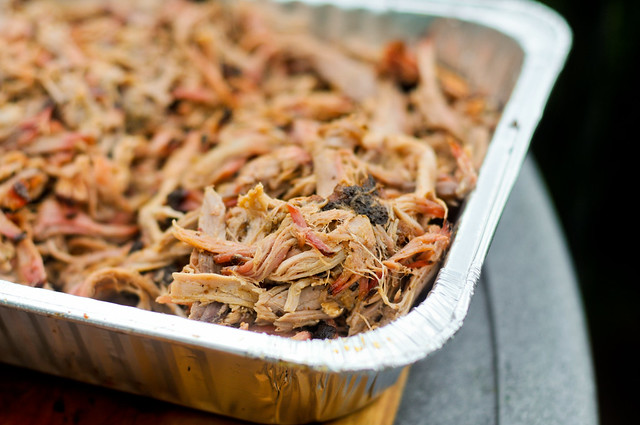 After a half hours' rest, I couldn't wait any longer and broke into the still pipping hot meat. I pulled as fast as I could, removing any excess fat along the way, until I had filled up an entire pan with luscious meat. The recipe didn't call for it, but I took a cue from the way Chris Lilly prepared his pork at the Block Party and mixed in some of the remaining vinegar mop with the final pulled pork, giving it an extra boost of tangy juice. 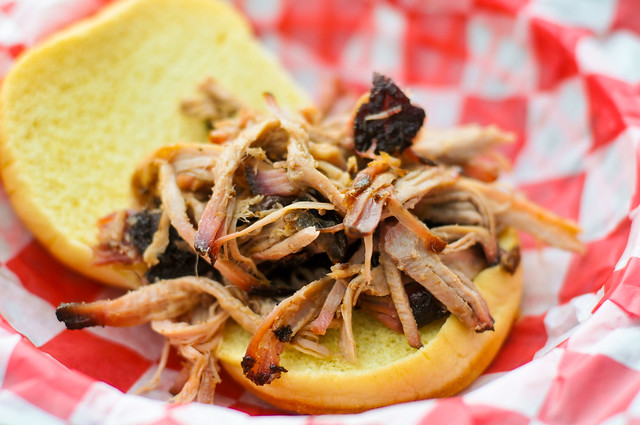 Now isn't that a sight for sore eyes? The beauty of it gets me every time, but the flavor put its good looks to shame. Now I won't be saying I've completely matched Big Bob Gibson's pork shoulder, but this came pretty damn close and definitely took my pork sills up a notch or two. Each bite oozes juice that is sweet, spicy, tangy, and, most importantly, porky. Nothing outdoes the natural flavor of the meat, instead the rub, injection, and vinegar mop only seem to enhance it, which is what makes this superior in my mind. It's so good, it needs nothing else, but if you were to add anything to this masterpiece of meat, I'd use nothing other than a NC vinegar sauce—anything else might could have the potential to mask its greatness.

1. In a small bowl, mix together all of the ingredients for the dry rub. Set aside.

2. In a separate bowl, mix together all of the ingredients for the injection. Using a meat syringe, inject the pork evenly at 1-inch intervals from the top side, using the entire injection solution. Dry the outside of the meat with paper towels and apply an even coating of the dry rub all over, patting it down so the rub adheres. Wrap the pork in foil and let rest in the refrigerator overnight.

3. Mix all the ingredients for the vinegar mop in a small bowl. Set aside.

4. Remove the pork from the fridge while you start the smoker. If using a Weber Smokey Mountain, light using the Minion Method with a mixture of oak and apple wood chunks. Smoke the pork shoulder at 225 degrees until the meat reaches 195 degrees, about 14 to 16 hours. In the last few hours, baste the meat with the vinegar mop ever hour.

5. Remove the pork from the smoker and let rest for 30 minutes. Pull the pork, removing any and discarding any visible fat. Sprinkle on some of the leftover vinegar mop, mixing with your hands to incorporate, then serve immediately.