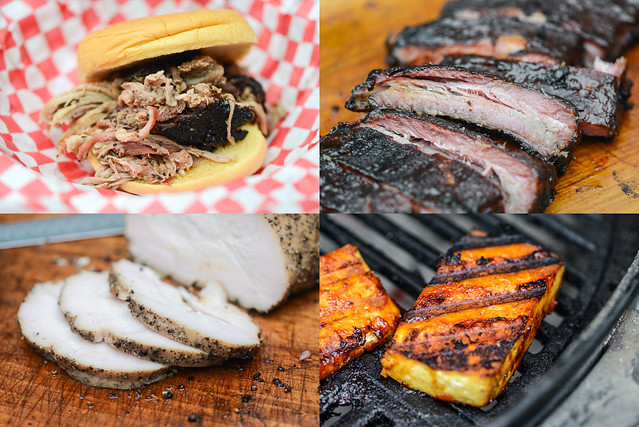 I haven't been so attentive to the blog recently, but that's for good reason—I've pretty much in non-stop motion for the past four weeks, a period that was kicked off with this Meatwave. The combination of the super hot summer and discovery of what it means to be a homeowner had me putting off the Meatwave ever since my housewarming cookout back in July. Now that I was ready to get things on track again after a prolonged absence, I felt the need to make up for lost time. So I picked up a ton of different meats to throw in the smoker, invited all my friends and neighbors, and put on an event worthy of being this year's Carne-val—our annual celebration of all that is meat! 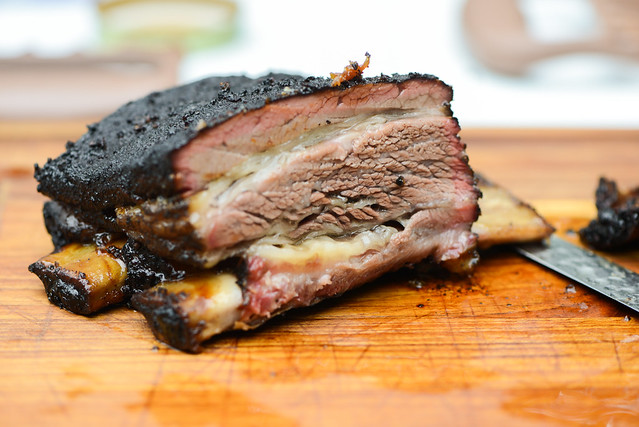 My initial idea was to get a few big chunks of meat, do them up Texas style with a salt and pepper rub, and just throw them in the smoker. My ambitions for a low effort, high yield event was hampered when I was unable to navigate the Durham meat scene to find reasonably priced Texas-style cuts like a whole brisket. I was able to find whole short ribs, but sticker shock left me asking the butcher to halve the rack, which did turn out incredibly tender and juicy as I've continued to hone my smoking skills since previous attempts. 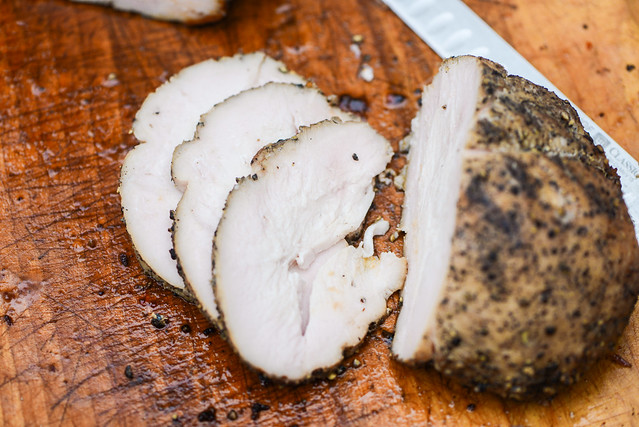 I didn't give up on my Texas theme quite yet, and ended up purchasing a couple boneless turkey breast roasts to give them the minimal Texas treatment. All I did to prep these were salt and pepper them the night before cooking, then smoked them slowly at 225°F over some pecan wood until they hit 150°F in the center. The end result was super moist turkey breasts with a powerfully peppery crust, just as I'm used to getting in the Lone Star State. 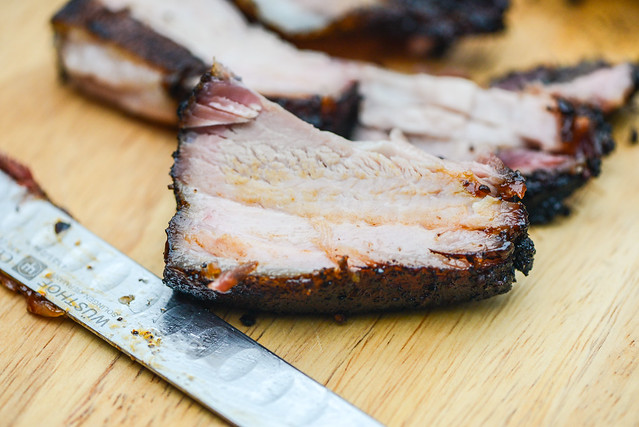 Preparing for this Meatwave ended up taking me on a grand tour of meat purveyors in Durham, and I was happy to find that my local Asian mart had an abundant supply of pork belly to be had. I picked up two chunks of this fatty pork and, again, did nothing more than cover them with salt and pepper and then smoke. This picture doesn't do the pork belly justice, as its immense fat was soft and glistening, almost melting in your mouth. Luckily I ended the day with one piece left, which will be transformed into barbecue pork belly buns at the next Meatwave. 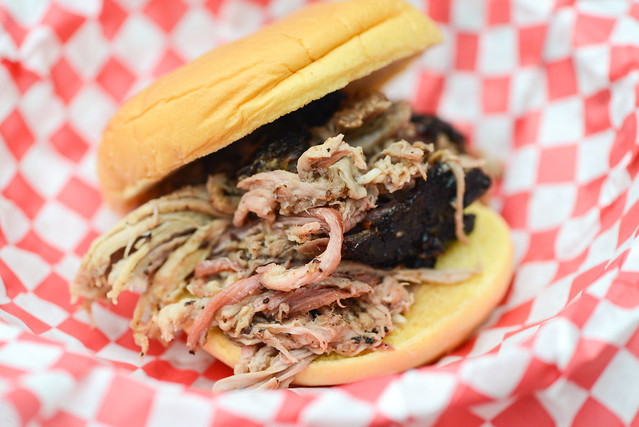 Since I literally invited the neighborhood and was short the brisket I was counting on feeding the crowds, I pivoted to another meat well suited for large gatherings—pork shoulder. I considered just going with salt and pepper here too, but then opted for the tried and true Big Bob Gibson recipe that never lets me down, and it continued to impressive yet again this day. 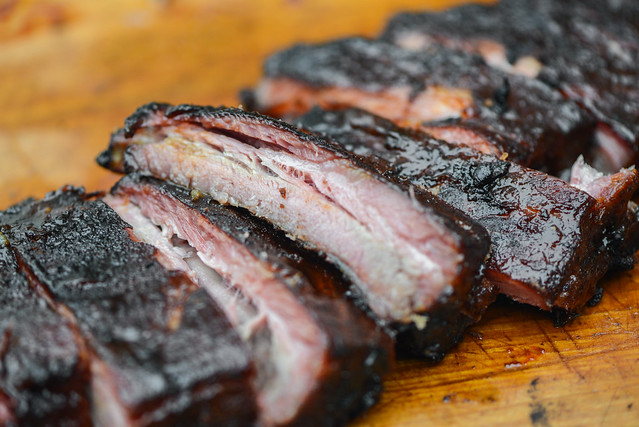 And I decided if I'm going all out, might as well go all the way and rounded out the menu with ribs. I used my own competition rub and sauce here, something I haven't done in a few years and I had almost forgotten how my endless tinkering with these recipes turns out some killer ribs. I was happy I went in this direction, as I feel like these really show off my craft more than anything else in the arsenal. 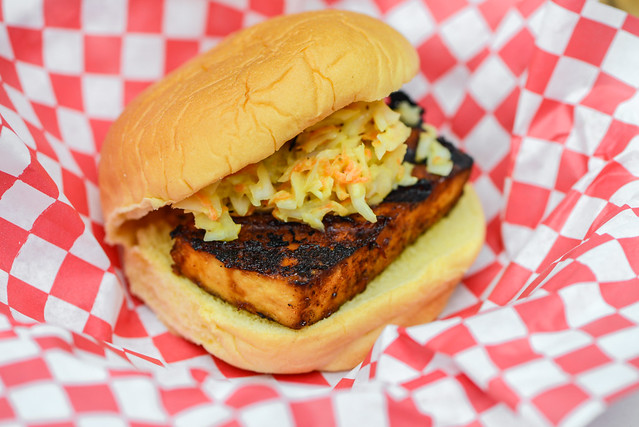 I didn't want to leave my veggie-dedicated peeps out, so I gave barbecue tofu a try. This was "barbecue" in the same manner as barbecue chicken—not smoked, but given a rub, grilled over indirect heat, sauced, and then caramelized over direct heat. I'm not much of a tofu guy, but I was told this was some real good stuff, especially when piled into a bun with a helping a my favorite mustard slaw. 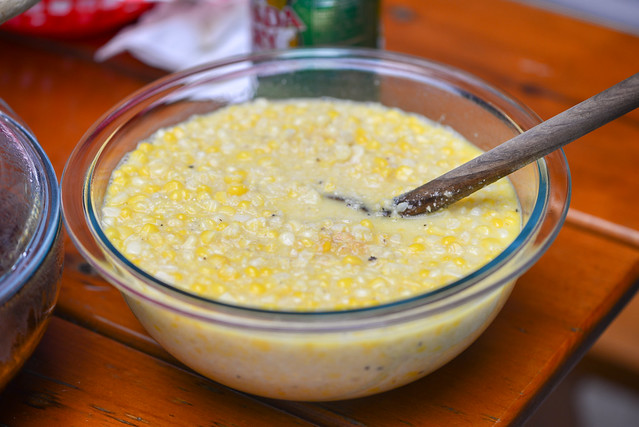 I also tried a new recipe to me to start off the sides—creamed corn. I went totally from scratch with this, starting with cutting the kernels from twelve ears of corn and using a spoon to extract as much of the milk as possible. This ended up making for a very fresh and um, corn-y, tasting creamed corn that was a far cry from the more bland and super heavy-cream soaked versions I'm used to.

I had also made a cucumber salad along with the corn and slaw, but failed to take a picture of it. 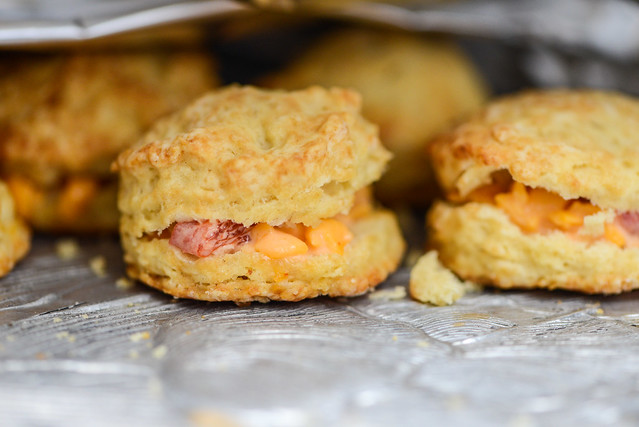 With so many guests, the desserts and sides were abundant this week. Among my favorites were these pimento cheese stuffed mini-biscuits. They were perfectly fitting for the menu that was going on. 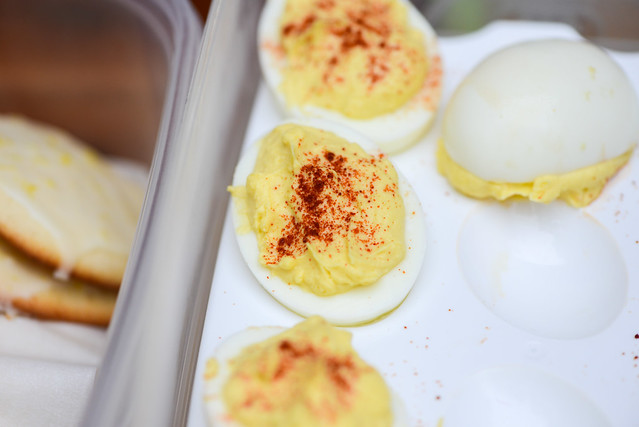 A close second were the deviled eggs Patrick and Rekha brought along. There was a misguided period in my life when I didn't like deviled eggs, so I tend to make up for that lost time by eating too many of them, which I certainly did at this Meatwave, continuing to stuff my face with these delicious eggs way after everyone had left and I was already fully stuffed. 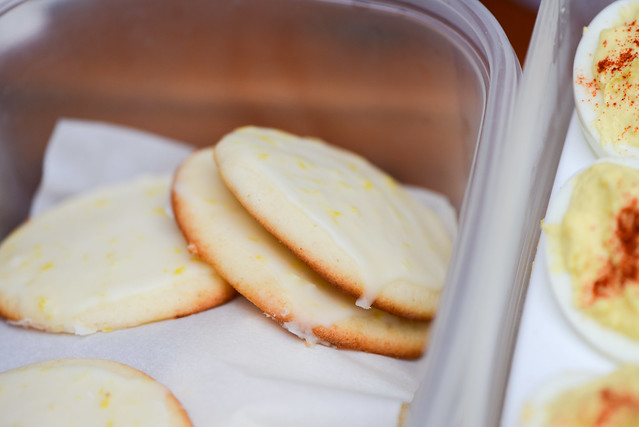 The cookie selection at this Meatwave was also impressive—these lemon ricotta cookies were just one of about four varieties to choose from. I would best describe these as like cake-y black and white cookies, but with a flavor that blows them out of the water. 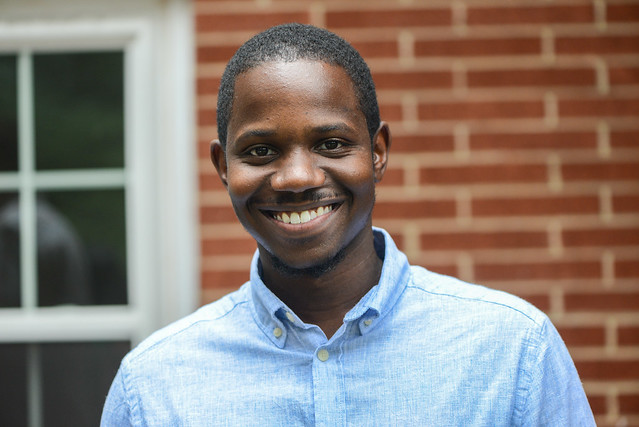 As bad as I was in capturing all the food of the day, I was worse as getting photos of all the people. I literally invited all of my neighbors, and the vast majority of them showed up. When the day ended, I realized I only took one of their photos, so Bernard, you get to represent the entire neighborhood crew. 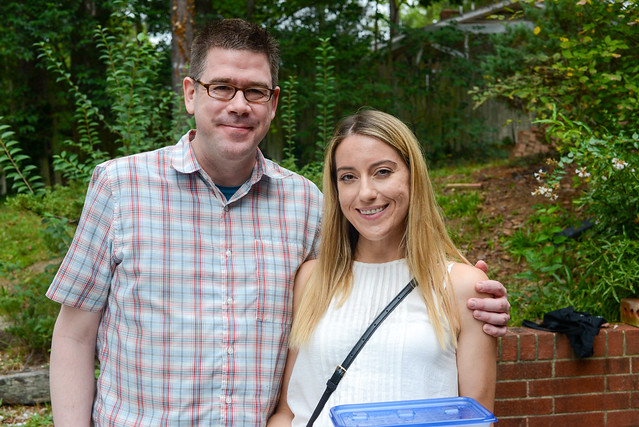 Along with the neighbors, our friends Andrew and Kim made it out. I'm not sure if I can trust them anymore though, as the previous week we were locked in an epic battle of Secret Hitler where Kim triumphed in destroying the liberal legislative body. 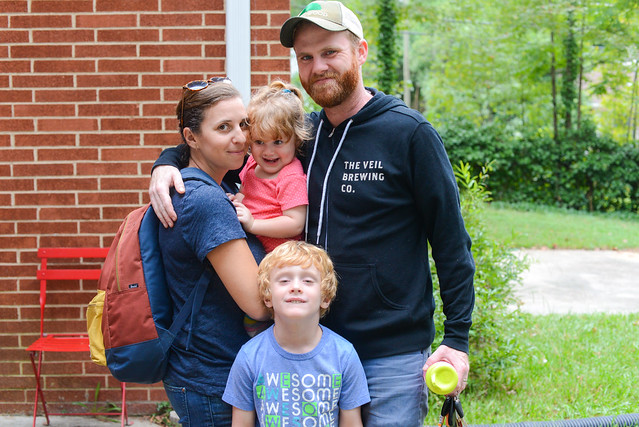 Next we have the Koen-Abramson clan. Believe it or not, I took about ten photos, and this was the most socially acceptable face Benji was able to muster out of the lot. 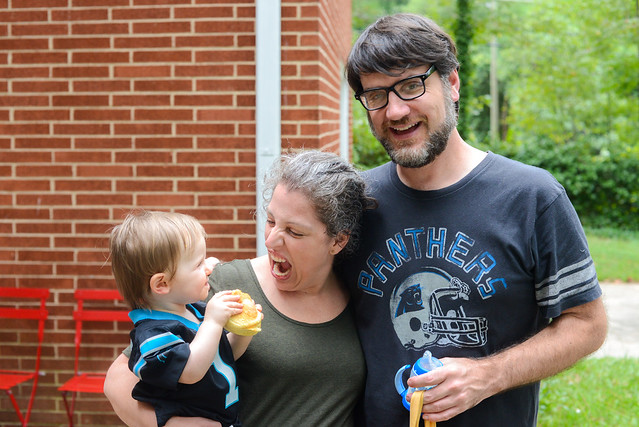 Lindsay and Chris made their first Meatwave appearance with little Alice in tow. Glad they were finally able to make it—they found themselves in the same moving/new home craziness we were in that derailed the Meatwave from its regular summer schedule. 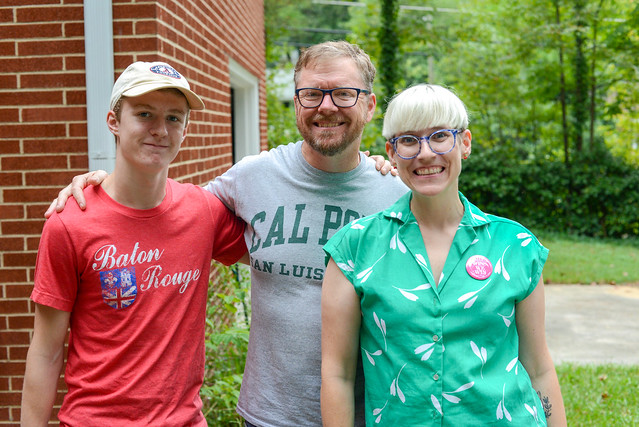 I have a feeling that Leslie, Steve, and Evan will end up being the most loyal of Meatwavers here in Durham. I can always count on them on doing their best to make it out, and it's thanks to Steve (realtor extraordinaire) that the Meatwave now has its new home. 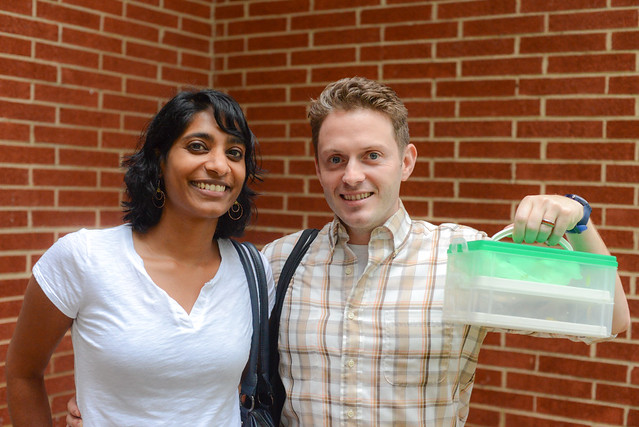 Last, but not least, is Patrick and Rekha. I imagined my life in North Carolina being closer and better connected to friends than I was in New York, and I feel like these two are a part of making that dream a reality. We wound up living just a mile apart and this summer has been a mix of going to each others barbecues, and to me, that's the life I want to be living.