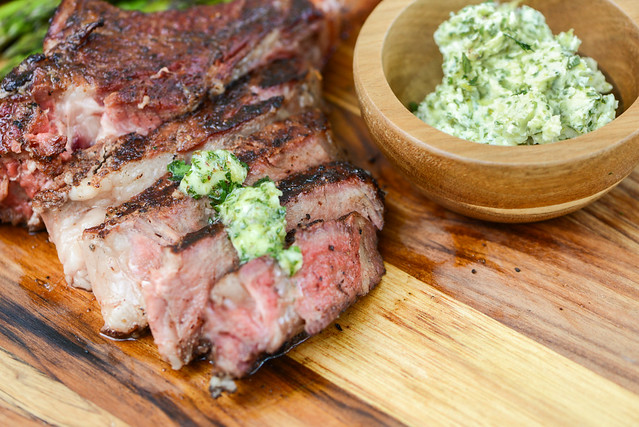 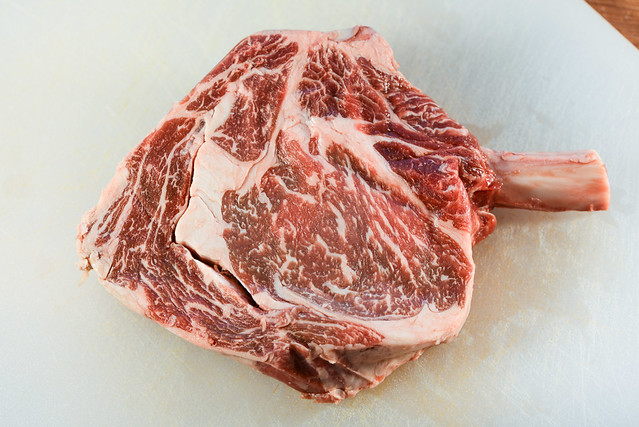 I say if you're springing for the good stuff, go all in and get yourself a prime, well marbled beauty of a piece of beef. This particular ribeye was an exemplary specimen with so much intramuscular fat that it was a sight for sore eyes. 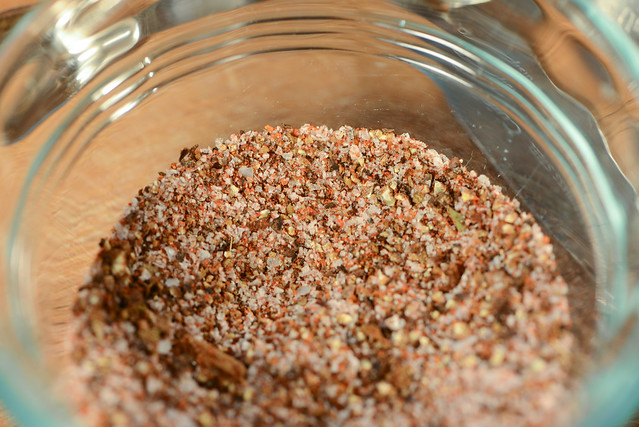 I tend to do nothing more than give my steaks a hefty coating of salt and pepper in order to let the natural beefiness take center stage, but this time around I decided to go a little fancier. Given that I had my heart set on smoking this giant ribeye, I went with a seasoning mixture that was a paired down version of a barbecue rub. Salt and pepper were the main players, of course, but to that I added chili pepper, paprika, and cumin to add layers of earthy spice that would be complimented by a cilantro-lime butter in the end. 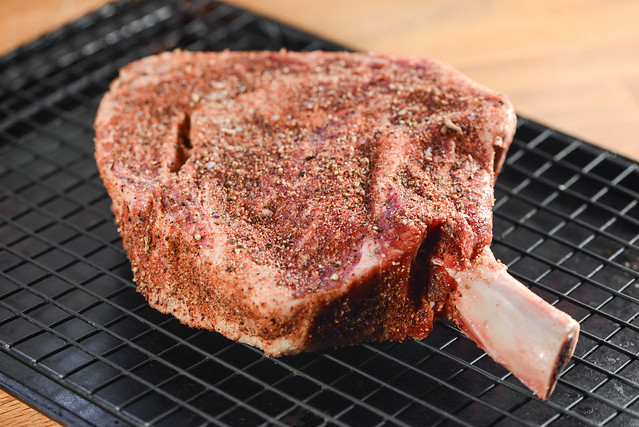 As with almost all steaks, it's best to allow it to rest for at least 40 minutes prior to cooking. In this time the salt draws out moisture, which is then reabsorbed into the meat, which leaves the steak with an intensified flavor. 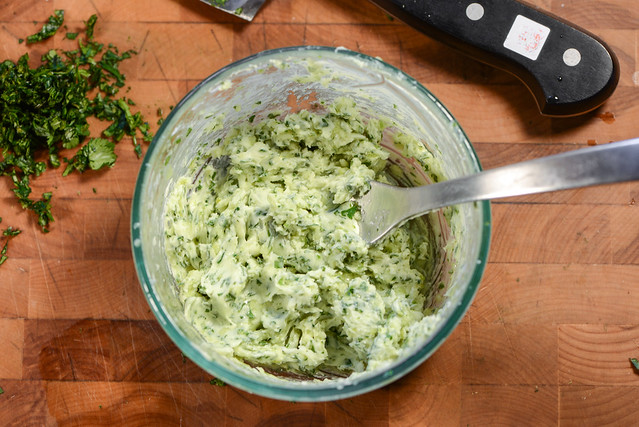 While the steak rested at room temperature—you can rest it for longer, but it should be done in the fridge then—I put together the compound butter. The idea was for this butter to add a hint of freshness along with richness to the completed dish. I kept things pretty minimal to accomplish this, mixing softened butter with cilantro, lime juice and zest, garlic, and salt. 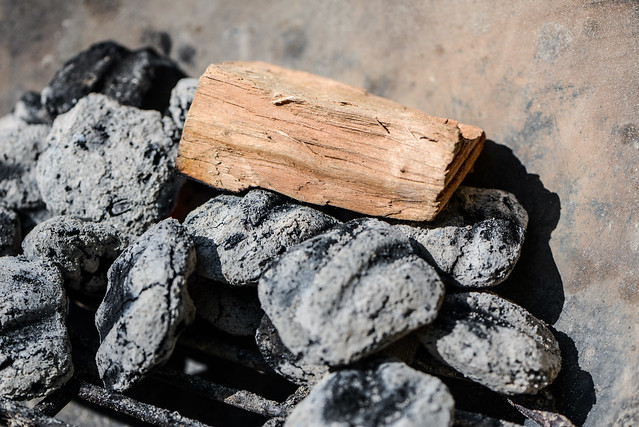 When it was time to smoke, I didn't want to bust out the smoker for just one steak that would later need the higher heat of the grill for searing. So to achieve a low temperature fire, I used only about 15 briquettes piled on one side of the charcoal grate in my kettle, and topped with a piece of pecan wood for the required smoke. 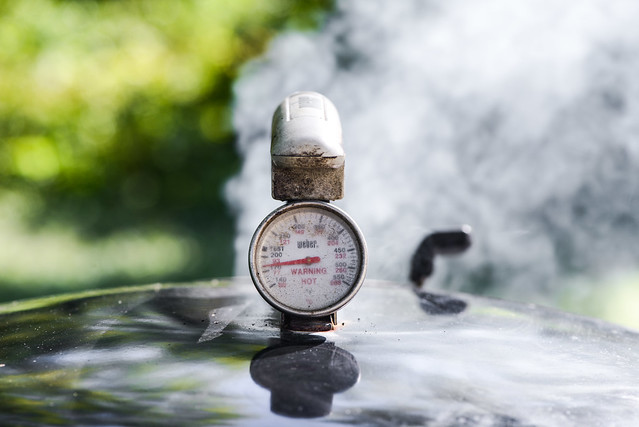 I then placed the ribeye on the cool side of the grill with the giant rib facing the fire since the meat closest to the bone cooks slower. I then covered and situated the air vent over the steak so the smoke would be drawn across the meat. This setup was successful in maintaining a temperature of around 200°F in the grill throughout the cook. 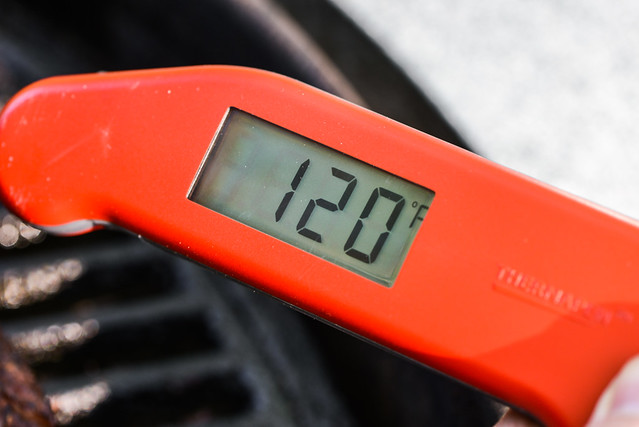 My goal in the smoking portion of the process was for the internal temperature of the steak to hit 120°F, which was 5°F shy of my final target for medium-rare. This took around 1 1/2 hours for this almost 2-inch thick beast. 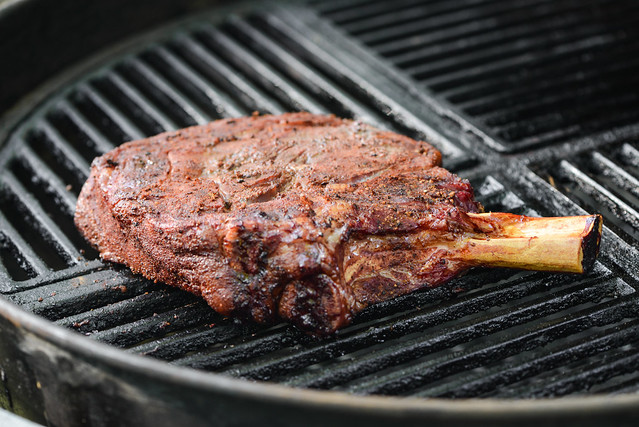 At which point, it looked like this—a mahogany exterior that had a dry appearance, but no crusty sear. That deep charred crust is what a grilled steak is all about, so the next step was all about developing that ideal exterior. 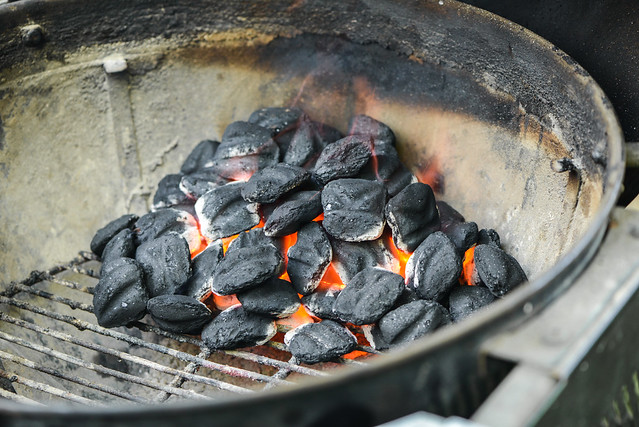 No 200°F fire is going to do the trick, you need an intensely hot set of freshly lit coals to do the job right. So I added just a little less than a chimney's worth of charcoal onto the almost now extinguished coals, and within 15 minutes, I had a blazing fire ready to go. 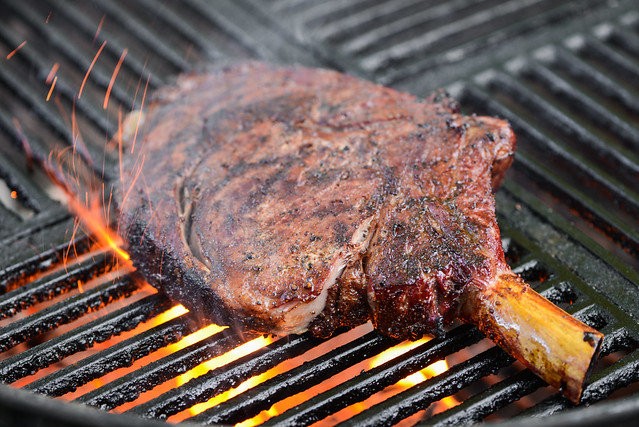 During the time the fire was lighting, the internal temperature of the steak dropped about 10°F, which was good since it would give me more leeway in getting it seared off without fear of overcooking. With the exterior of steak already mostly devoid of moisture, the ribeye developed a great crust in only a couple minutes, with me flipping the steak every 15 seconds or so for the most even cooking and searing. 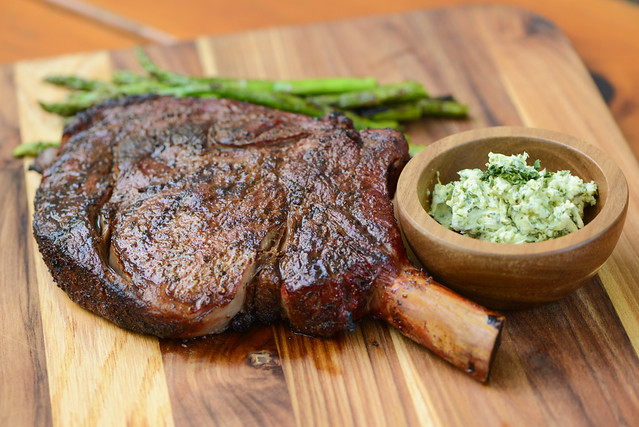 I then transferred the steak to a cutting board to rest for 10 minutes, and while I had a new fire at my disposal, I grilled off some asparagus to serve as a side. When it all came together, it made for one mouthwatering scene. 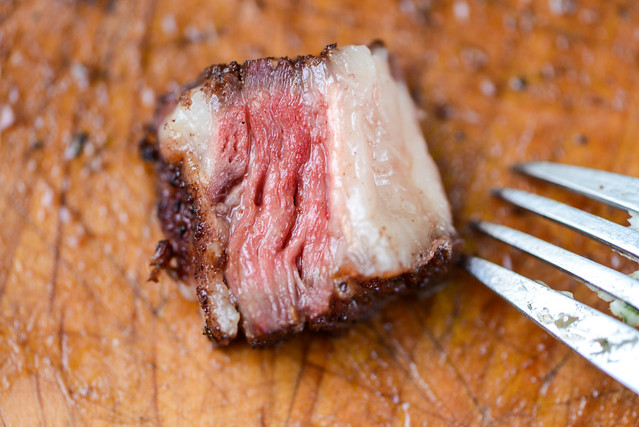 As much as I talk a skirt steak game, a perfectly grilled ribeye is up there at the pinnacle of what a cow has to offer. The flavor here was super beefy, and some of my favorite parts were the softened fat deposits that added an intensity that elicited a response of just closing my eyes and indulging in the shear awesomeness of this really great steak. The additional flavors introduced added a unique touch that all compliment the beef well—the spice rub brought along a background earthiness, while the butter did provide a freshness that was a welcomed counterpart to the otherwise heavy meal. The smokiness was there too, but mild, as it was the overall power of the beef that commanded attention, and it got it, in spectacular form.

As if a perfectly grilled ribeye isn't good enough, this recipe adds in smoke, a chili spice rub, and a cilantro-lime butter to further enhance this intensely beefy steak.