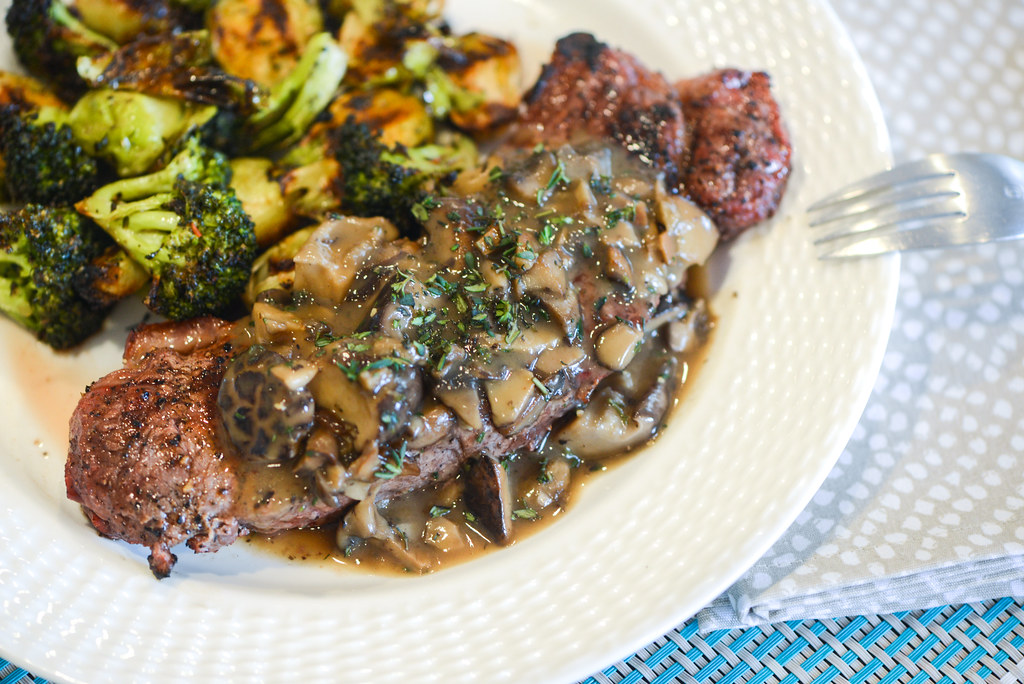 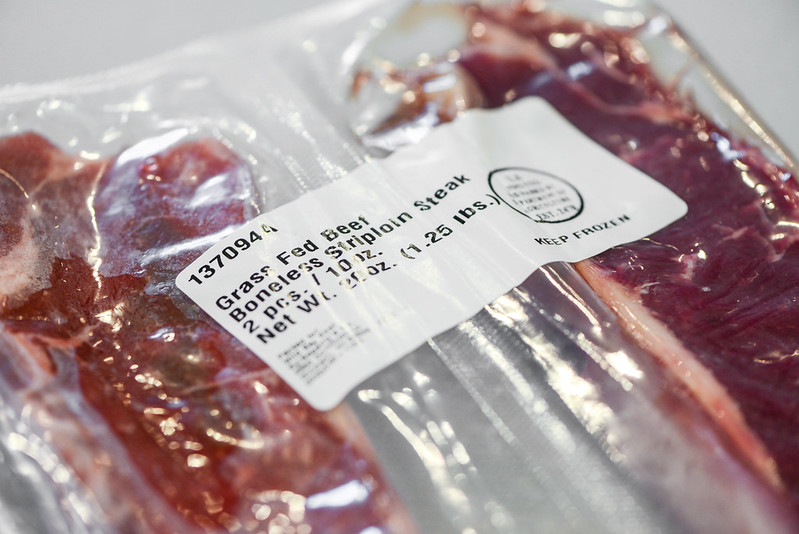 No longer a true grass fed novice, I knew how to correct some of the issues I had from the first go round. Most of it involved proper cooking, as the combo of very little intramusclar fat and a relatively thin, one-inch thickness combined to make a steak that cooked faster than I was used to. 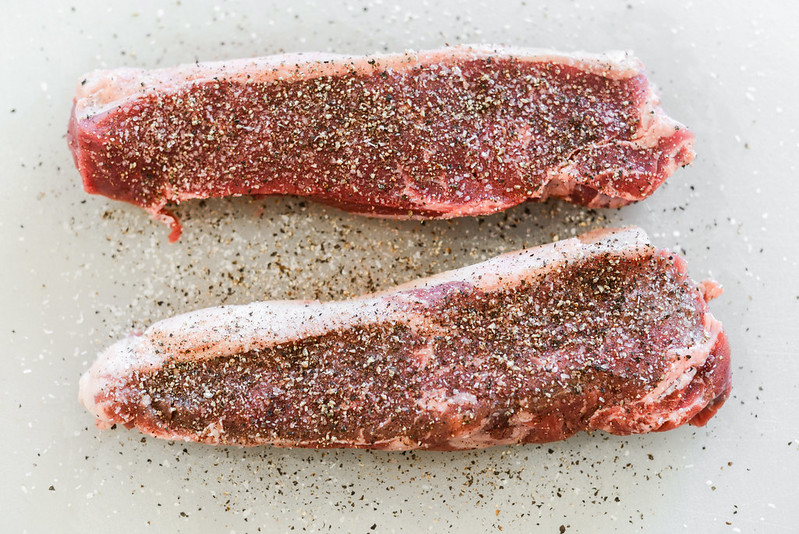 I started these steaks out as I would with any—with a generous seasoning of salt and pepper. I always do my salting of the steaks at least 40 minutes prior to cooking. This is the minimum time needed for the salt to do its magic of drawing out moisture and then reabsorbing it, leading to better moisture retention and overall flavor. If I'm seasoning less than an hour ahead of time, I just let my steaks sit out at room temperature, otherwise I'll stick them back in the fridge if it's going to be a longer stretch of time until they're cooked. 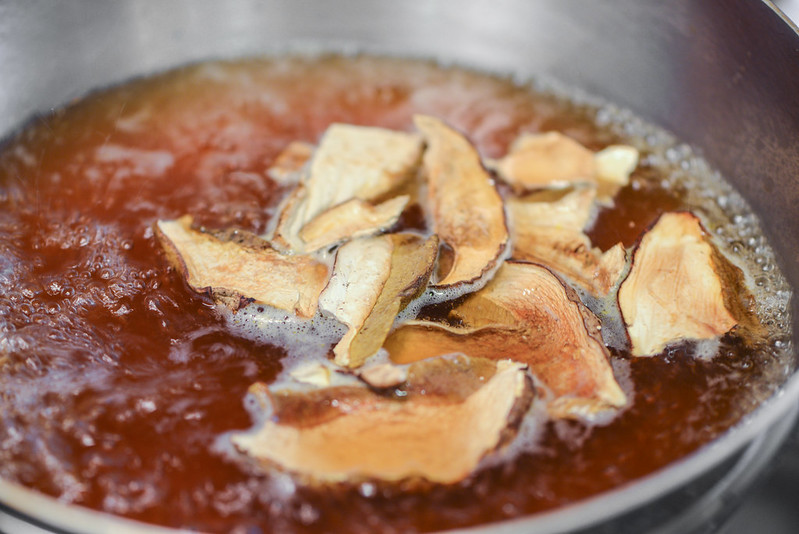 The mushroom gravy I used here was a recipe I developed a long time ago and have come back to a few times to continued great results. This gravy is incredibly savory with a deep woodsy mushroom flavor, and I pin a lot of those ideal qualities on the use of dried porcinis. I find soaking these rich mushrooms in the stock that will be used to form the gravy embeds the liquid with a strong mushroom flavor from the get go, and it's always good to start things off on the right foot. 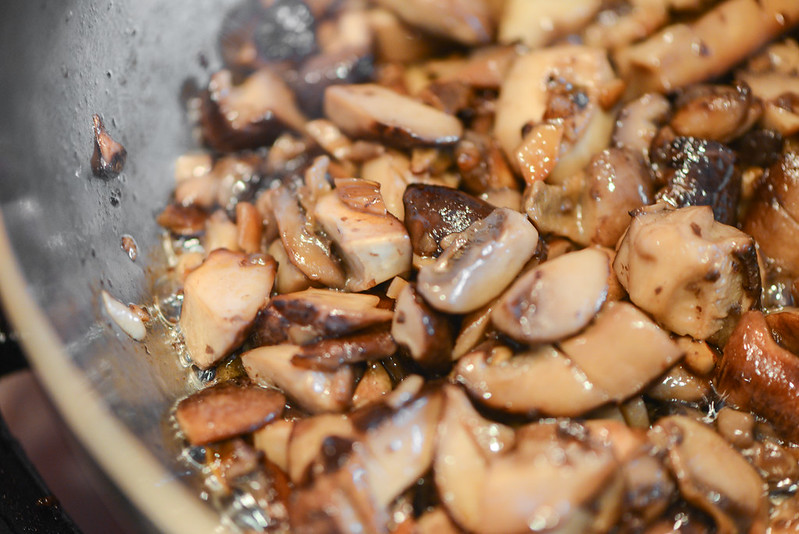 Of course, a buttload of other mushrooms helped too. I used a mix of cremini and shiitakes in my recipe, but you can really use your mushrooms of choice here. The main idea was to get a complex and varied mushroom flavor by both quantity and variety. To get the most flavor from the mushrooms, I cooked them until they released their liquid and then started to brown. 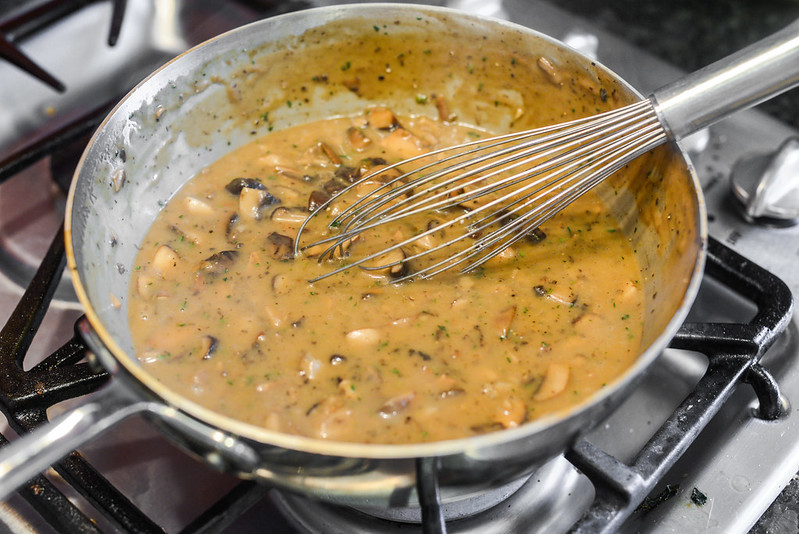 At which point I added in flour and cooked it for a minute until it lost its raw aroma. Then I whisked in the mushroom-infused stock and let the gravy simmer until slightly thickened. I then finished it up with a bit of dry sherry, fresh thyme, and salt and pepper to taste. This gravy turned out as rich and delicious as I remembered it and couldn't wait to see how it went with the steaks. 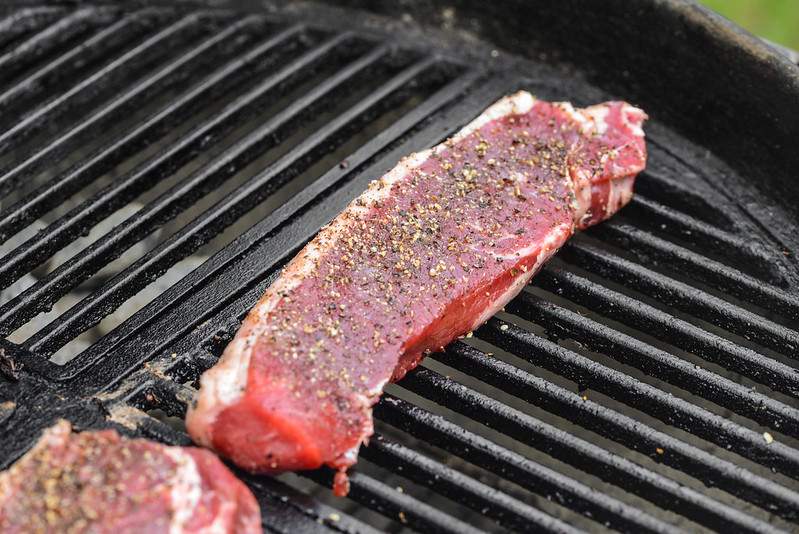 For the steaks, I used the reverse sear method to achieve the most even cooking with the juiciest results. This started out with roasting the raw steaks over indirect heat, which usually takes a bit of time and I'm used to being able to safely step away from the grill this step. This was my main folly in my last go round with grass fed beef—I went inside to photograph my side dish and by the time I came back, the steaks were already twenty degrees past the temperature I wanted them at. So this time I sat next to the grill, checking the temp every few minutes to be safe. 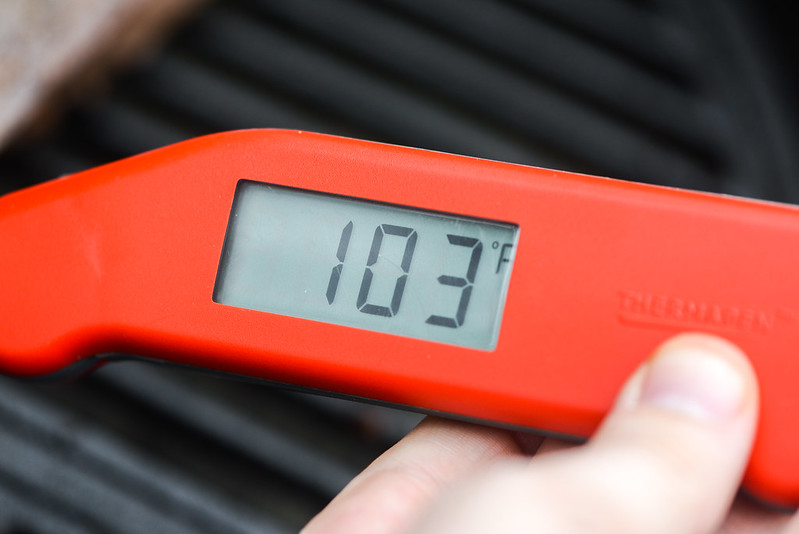 I was shooting for no more than 105°F, since I wanted my final temperature to be around 125°F for a good medium rare. Once I saw these steaks were close to my target, I moved them over to direct heat. 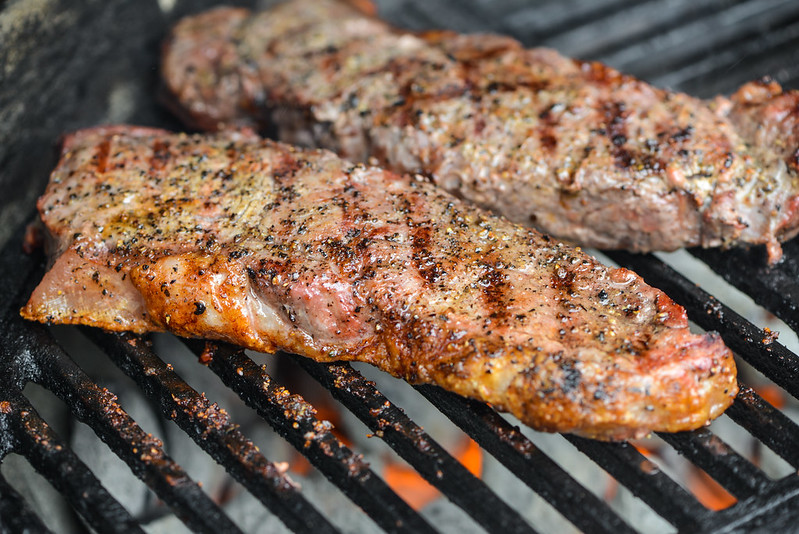 Now that the beef was already cooking for awhile, the exterior of the meat had lost a lot of moisture, which was great for getting a good sear on the steaks as fast as possible. While searing, I was flipping the steaks about every 30 seconds or so for more even cooking, and with each flip, I also took a read on the temperature. I like a deep, crusty sear, but the steaks reached their final temperature before that could happen, and I decided juicy meat was more desirable than a deep sear, so pulled them off to avoid overcooking. 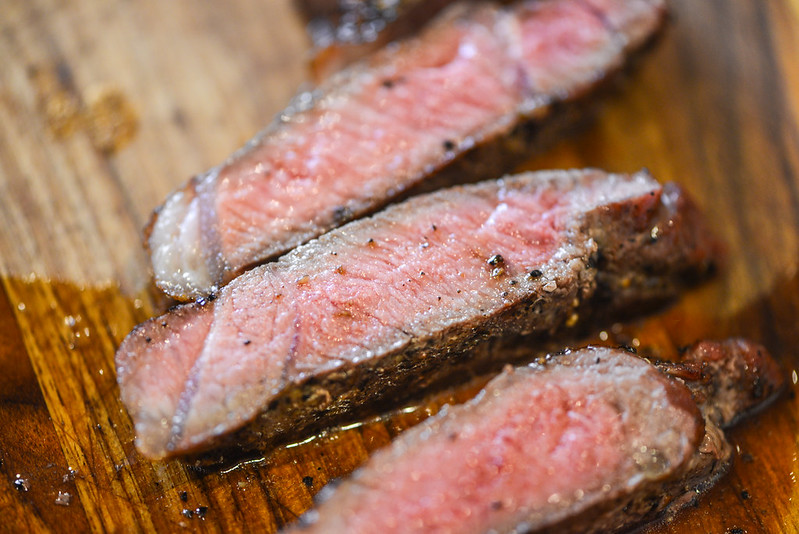 After resting for five minutes, I sliced into the steaks and was greeted by both a beautiful rosy red color almost from edge to edge, along with a ton of juice. My previous grass feds had the nice color, but lacked that glistening look, so I was much happier this time knowing I righted a wrong. 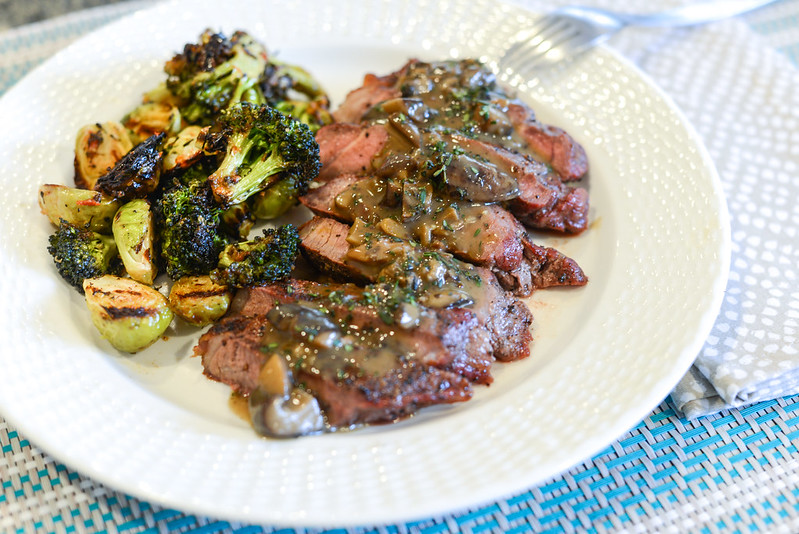 I couldn't wait to dig in, but after spooning on the gravy, my enthusiasm turned to frustration as I couldn't figure out a quick way to make these look really good in a photo. I didn't want to take so long that the steaks got cold though, so eventually just gave up and figured it was all good, especially since "ugly delicious" is so hot right now. And delicious they were. That gravy had such an amazing richness and savoriness to it that was hard to stop eating it by the spoonful when taste testing it, but it was even better when paired the strong meaty flavor of the grass fed beef, whose own juiciness really didn't need a crutch. Still, the two were a perfect match in my opinion, and I think this second attempt at grass fed steaks is proving to me that I'm understanding the unique cooking qualities and flavor much better than before and am looking forward to whatever I come with for next couple batches of steaks I still have sitting in the freezer. 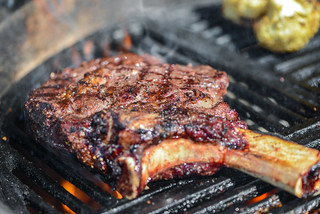