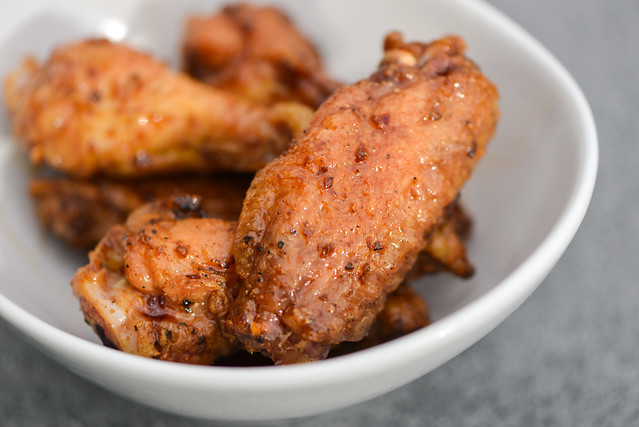 My gateway food into Filipino cuisine was chicken adobo. In the early years of dating my wife (a Filipina), the bright red meats, chocolate laden rice, fried pork knuckles, and other traditional dishes served to me were hard pills to swallow as I was trying to navigate a way into liking Filipino food. Back then I was not an adventurous eater, so I needed something familiar enough that I would want to eat, and that came in the form of chicken adobo.

This dish is comprised of chicken pieces simmered in a mixture of vinegar, soy sauce, garlic, bay leaf, and black pepper. It's simple, which made it appealing, but also provided a taste of the garlicky and sour flavors that are a common part of the Filipino territory. From that singular dish, I opened up and have embraced the food culture of this Southeast Asian nation. Chicken adobo has actually become one dish I rarely eat anymore—why get flabby chicken when you can have crackling lechon kawali or sweet barbecue—so I thought it was time to get back to a first love and see how I could translate into chicken wings. 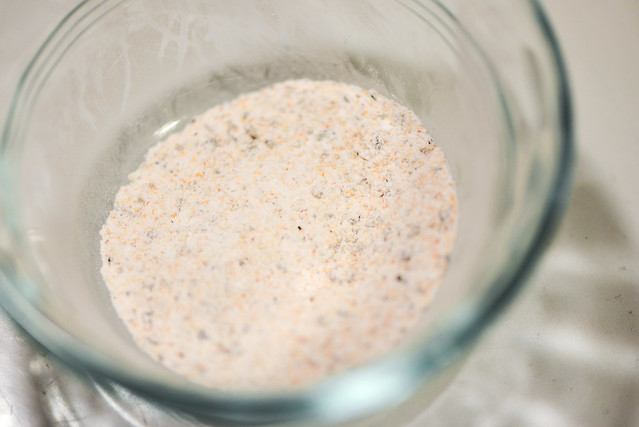 I knew I didn't want to do this in a traditional adobo style—the stewed approach would create a mighty tasty meat, but leave the skin soggy and unappealing, and with so much skin on wings, that's not a good thing. Instead, I went with my standard procedure to get crispy grilled wings, which involves coating them with baking powder and letting them air dry. 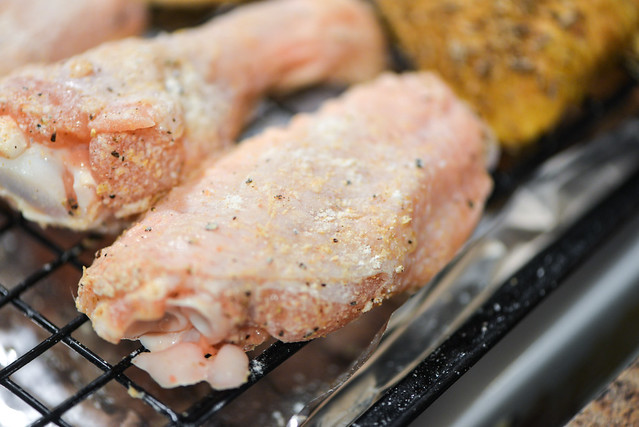 I saw this step a good point to start building adobo flavor though, so in addition to the baking powder, I added both garlic powder and black pepper to the "rub." All the wings were generously coated in it and set on a wire rack, placed in the fridge, and let sit for eight hours. 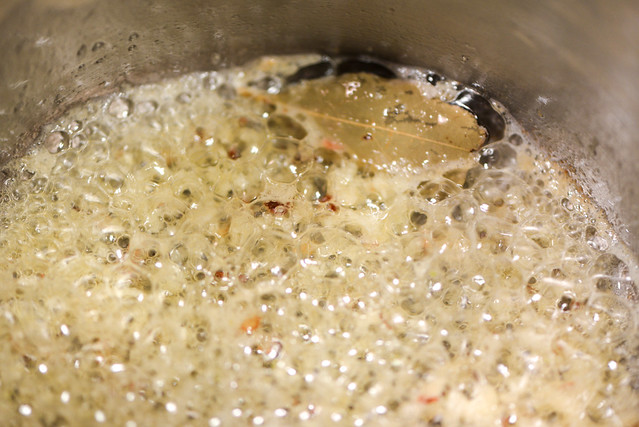 I wondered how I was going to get all that adobo flavor into the wings though. Luckily I had just gotten Marvin Galputos's The Adobo Road as a birthday present last week , and that book already has a recipe for adobo wings. It looked solid to me, so I decided to go with it, starting the sauce off by melting butter alongside a bay leaf. Garlic was then added and let cook until browned, infusing the butter with an intense garlic flavor. 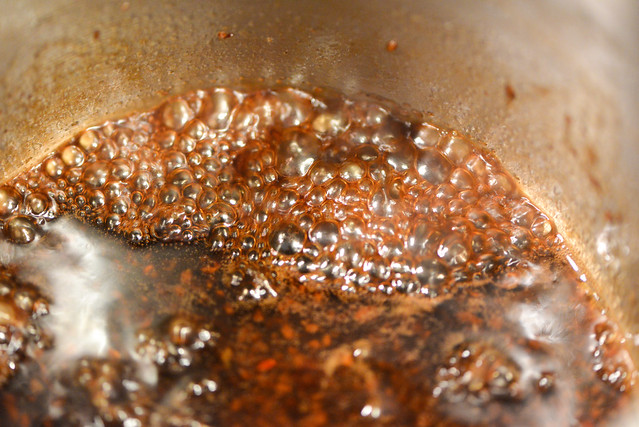 Next came the require vinegar and soy sauce, plus a little departure form tradition with brown sugar and red pepper flakes. The mixture was simmered until it thickened into a light glaze to ensure it would coat the wings nicely later on. 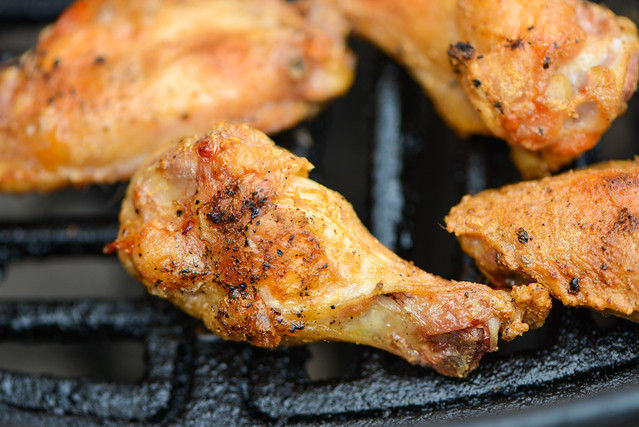 I then grilled up the wings over indirect medium-high heat until the skin was crunchy and the wings were lightly browned—about 40 minutes. 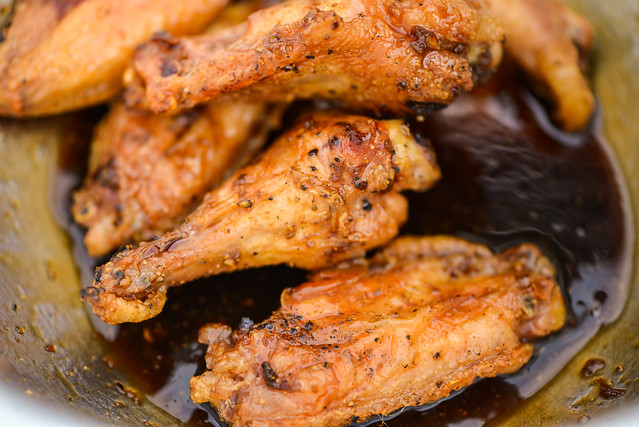 Then into the sauce those little chicken pieces went, tossed until they were well coated and had a nice glisten to them. 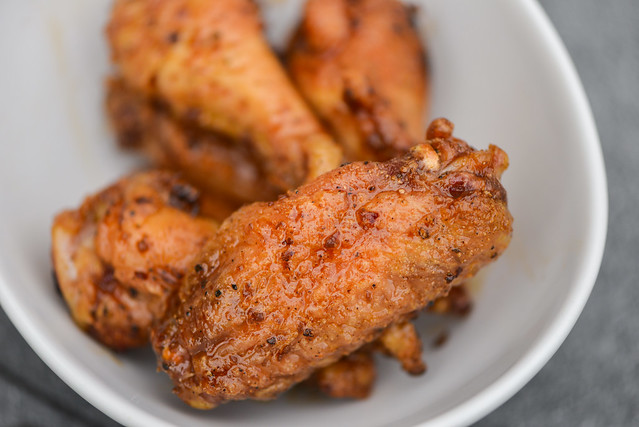 One taste of these wings brought me back to why I originally loved adobo so much. They had a sharp combo of vinegar tang and garlic bite that made them taste uniquely Filipino, along with depth from the soy sauce and bay leaf. These wings didn't stop there though, they added sweet and spicy components—a departure from traditional adobo that made them feel fully realized as chicken wings. I would say these made me want to go back a rediscover my fondness for chicken adobo, but really, they just left me wanting more of these wings, which I kind of liked better.

Building on the sharp and tart garlic and vinegar combo that's a Filipino standard, these wings are also sweet and spicy, making them go beyond their adobo influence.

Sauce adapted from The Adobo Road by Marvin Galputos.