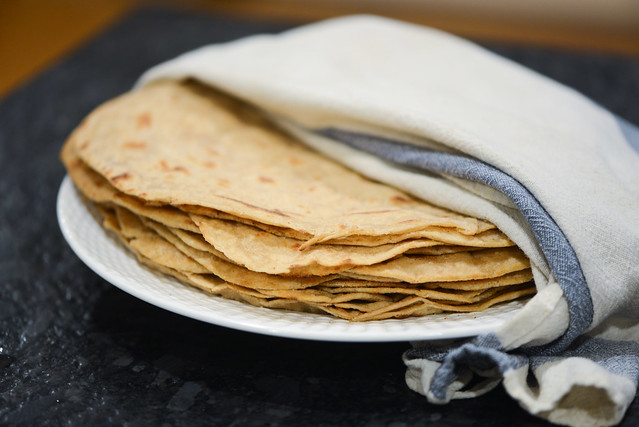 No Indian meal feels complete to me without some form of bread. I tend to opt for buttery, soft naan, but equally delicious are light and airy poori and flaky, layered paratha. I've been on kick of making Chinese scallion pancakes at home lately, and I couldn't help but notice that the interior texture of those layered breads were very similar to paratha. Not only did this make me crave some of that Indian bread, but also made me think I could essentially use the same process as scallion pancakes, just swapping some ingredients, and end up with pretty perfect paratha, so I tried just that. 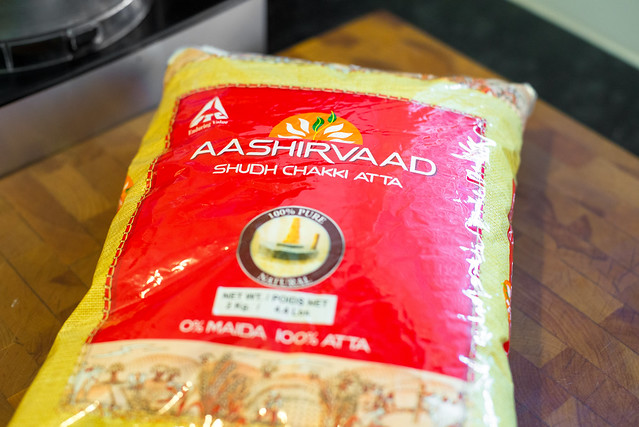 For the best paratha, I had to first start with the right flour. I knew this was atta—a high gluten whole wheat flour—but what I hadn't planned for was for my tiny local Indian market to have a variety of attas to choose from. With a little quick Google image search for "atta," I was guided to pick up this bag that seemed to be one of the preferred, or at least more common, brands. 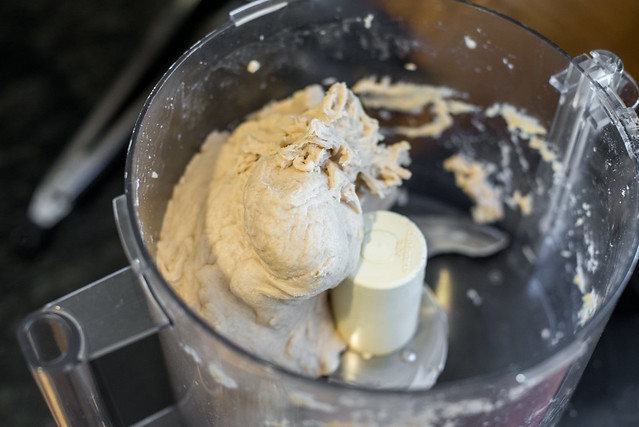 The pretty perfect scallion pancake process I've been using is from J. Kenji Lopez-Alt on Serious Eats. It starts by using the food processor to quickly bring the dough together, saving a fair amount of by-hand kneading. I used a ratio of two-to-one flour to water and added a little salt and a tablespoon of melted ghee to make the dough. After processing this for about 15 seconds, I had a solid ball that clung to the blade, which is the ideal consistency—if the dough doesn't come together, you can add additional tablespoons of water, one at a time, until it does. 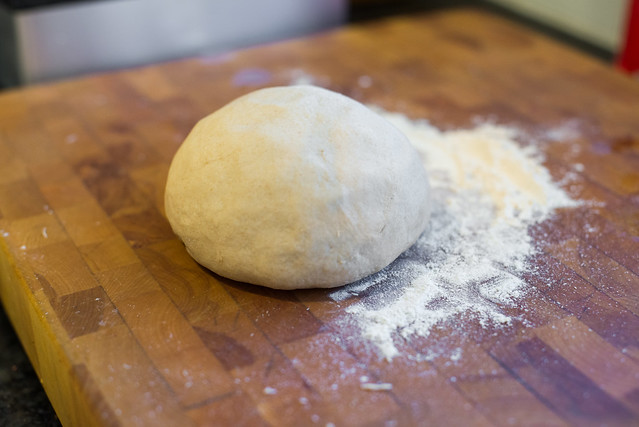 I then turned the dough out onto a lightly floured cutting board and kneaded it until smooth, which took a little under a minute. I then covered it with plastic wrap and let it rest for 30 minutes before dividing the dough into eight equal pieces and rolling each of those into a ball. 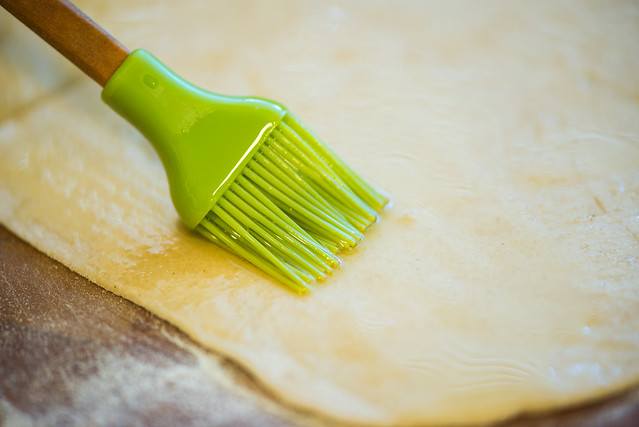 Next came the formation of all those flaky layers. It may sound a little lengthy or confusing in the directions, but once you have it down, it's actually quit simple. It began by rolling out the dough into a disc roughly seven inches in diameter. Then I brushed the exposed side of the dough with melted ghee—you can use regular butter here, but might as well pick up some ghee if you're already at the store procuring that atta. 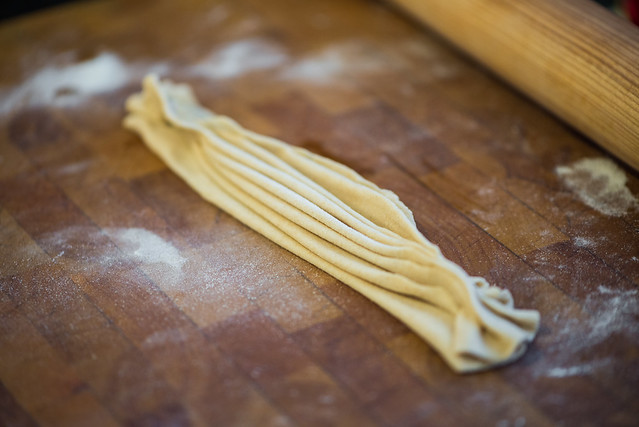 I noticed that many recipes for paratha recommend folding the dough in an accordion fashion next. I tried this but found a little more tedious and exacting than the method I had been using for scallion pancakes. 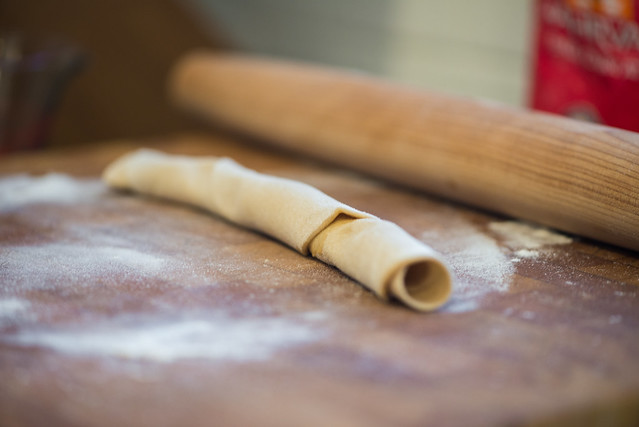 In that recipe, the dough is rolled up like a jelly roll, which is quick and easy. Side-by-side tasting of each method proved them almost identical, with the jelly rolled version ending up slightly more flaky, so I kept to this easier implementation in the end. 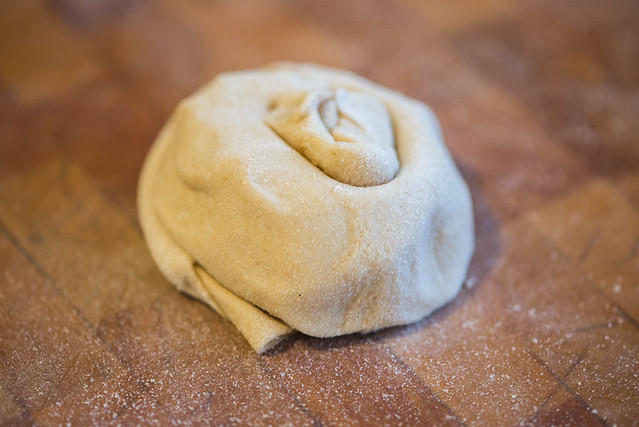 Once rolled up, I twisted the dough into a tight spiral shape and tucked the end under the bottom. 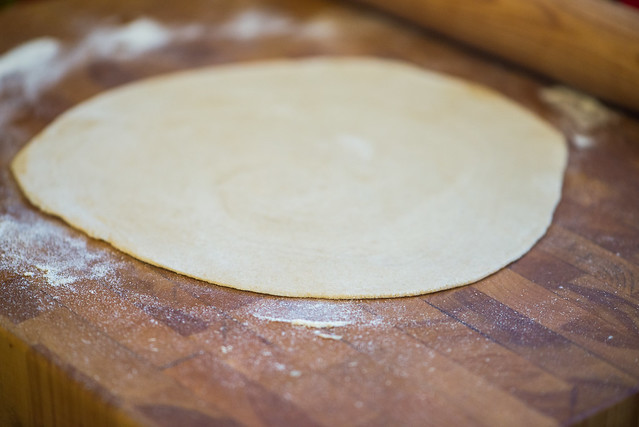 I then rolled it out into a disk again and repeated the entire process of buttering, rolling, spiraling, and re-rolling into a seven-inch circle. The doubling up here ensures the final product will be just as flaky as can be, which is the hallmark of the best parathas in my opinion. 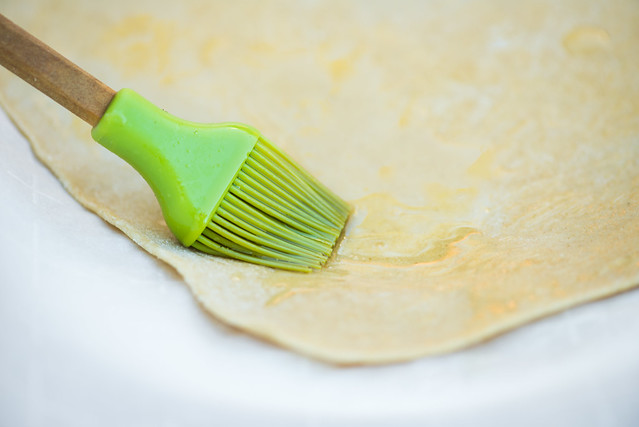 Normally paratha would be cooked in some ghee in a very hot cast iron skillet, and while I did cook some this way, I also used my grill to see how they fared over a direct fire. To replicate that extra butteriness when cooked in ghee, I brushed both sides of the dough with some before putting the them on the grill. 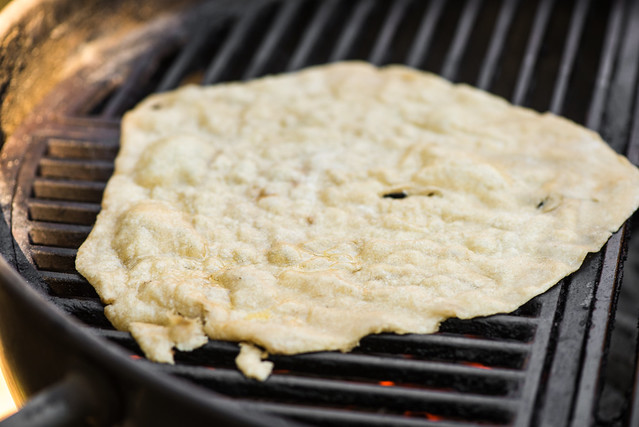 I then cooked the bread over direct heat, waiting for the dough to bubble and char on one side before flipping. Over a very hot fire, this took under a minute. 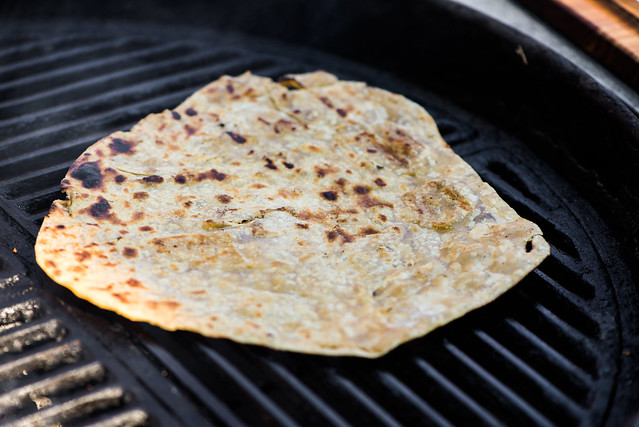 Then I let the second side cook until it was lightly charred, at which point the entire thing was cooked through. I transferred each piece of bread to a plate and covered with a kitchen towel until they were all done. This final rest not only keeps the parathas warm, but the steam helps soften them to create the best final consistency. 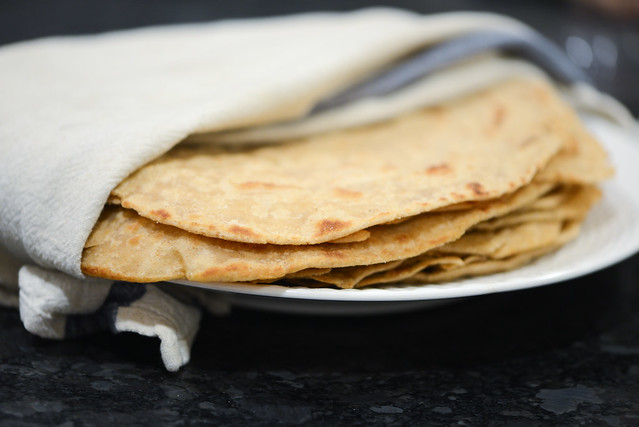 Man were these awesome and they cemented a feeling that Indian breads are pretty magical. The parathas were soft with a great flaky texture. They had a nice flavor from the wheat flour and a richness from the multiple brushings of ghee throughout the process. I had made these for a Meatwave, so did two batches originally, but couldn't stop myself from eating one after another as I cooked them off. This forced me to put together a third batch to ensure there would be ample bread for my guests to offset my gluttony these fresh parathas brought on.

Rich, flaky paratha is an amazing Indian bread that's even better when made at freshly at home.