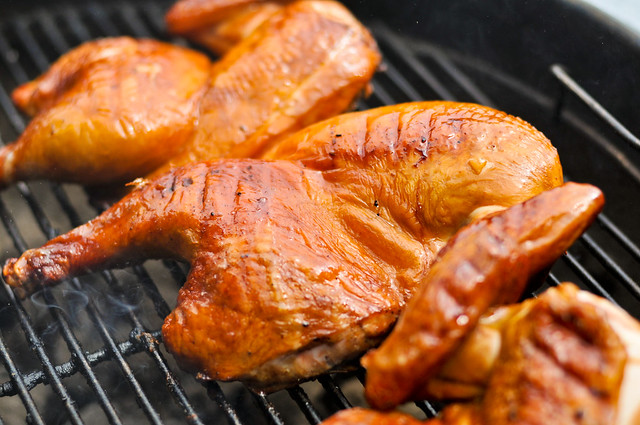 I have a constant battle with authenticity in my recipe development. Trying to remain true to a particular dish can be a challenge without the means to be able to travel everywhere and see how the food I'm trying to replicate is actually made and tastes. At the same time, veering too far off the path of a perceived dish can be construed as major wrong to those who hold that food near and dear. That's how the story went with this Hawaiian Huli Huli chicken, who's recipe I pulled from Cook's Country, cooked, and posted on Serious Eats. What followed were a fair amount of comments about how it's not the real deal, and therefore not worthy of its name. So authentic it may not be, but I think you shouldn't let that get in the way here, because this chicken was insanely delicious. 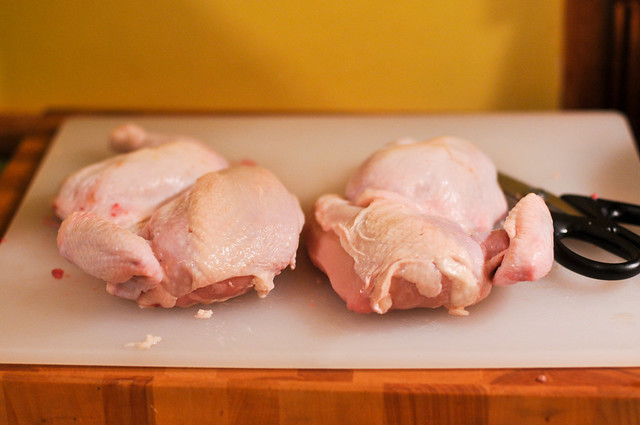 Huli Huli literally means "turn turn" in Hawaiian. While this recipe takes a departure from the rotisserie the chicken would normally be found spinning on, it does start with what seems to be norm of butterflied chicken. The only difference here is the bird was further split into two equal halves for some easier management on the grill. 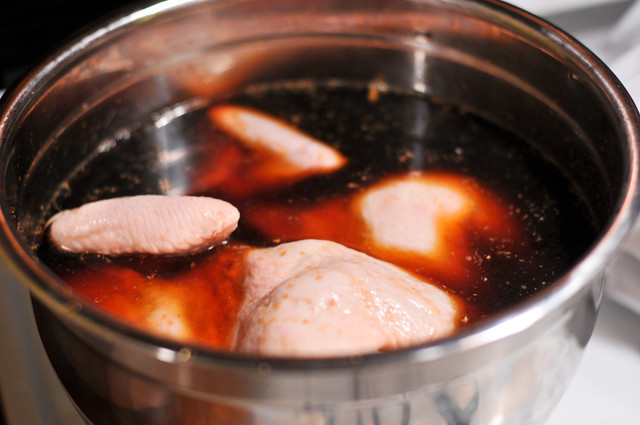 Next the chicken halves were given a brine. Bringing in some Asian influence, this consisted of soy sauce as the salty base, with garlic and ginger added to that to make a brine that not only increased moisture, but flavor as well. 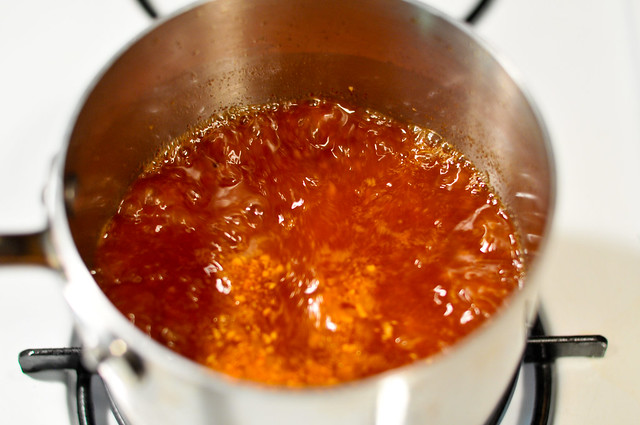 While the chicken was brining, I put together the glaze. This is where some commenters really took issue, noting that the pineapple juice base is not a normal ingredient here, and that too many people equate the addition of pineapple as a qualifier to deem anything "Hawaiian." That may be true, but I stand by this sauce being amazing no matter what the misgivings may be, and can't imagine changing it after trying it. Along with the pineapple juice, there's soy sauce, brown sugar, ketchup, vinegar, garlic, ginger, and Sriracha, which boils down to an intensely sweet and fruity glaze. 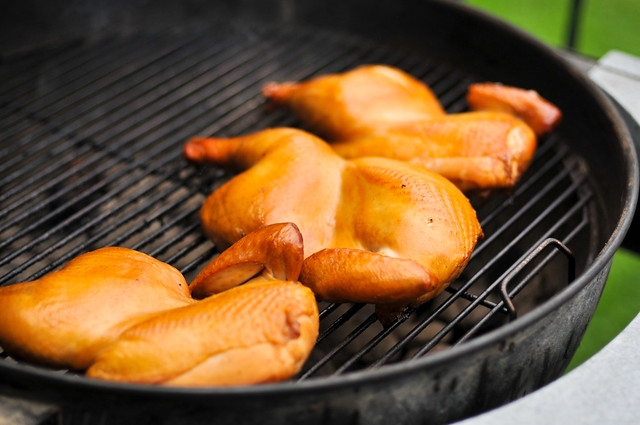 Following a few hours in the brine, I placed the chicken over indirect heat, skin side up, with a couple small chunks of smoke wood added. After removing the grill cover 30 minutes later, I was greeted by these incredibly beautiful orange-hued birds. They already looked good enough to eat, but I hadn't even reached the turn yet. 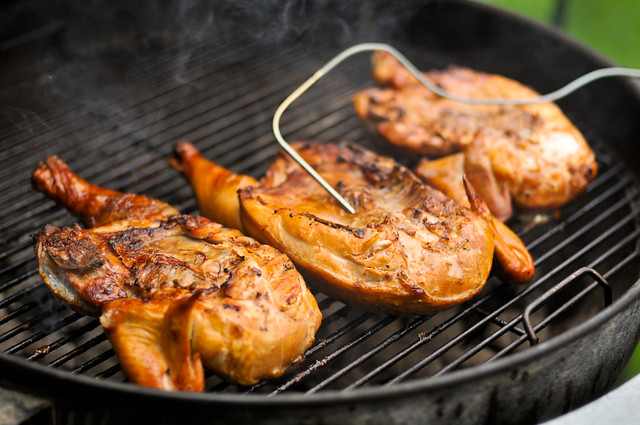 The turning of Huli Huli chicken on the spit helps the chicken cook evenly, get a nice skin, and adds a little insurance from the sauce burning. To achieve some semblance of this sans-rotisserie, the birds needed to be flipped about half way through. Once face down, the previously top side now enjoyed the same heat the bottom had just gotten, which also brought along the power to add a little crunch to the skin. 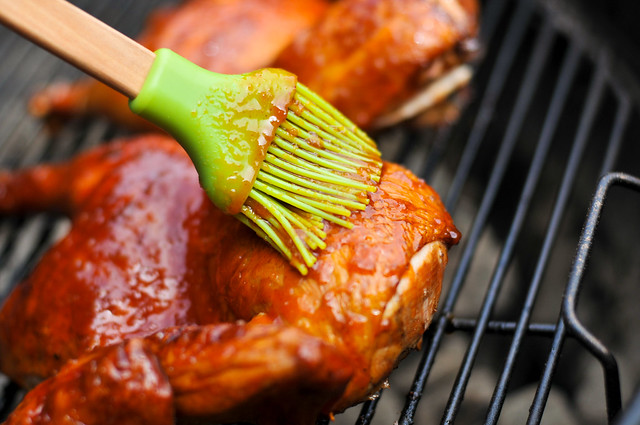 After another 25 minutes, these were ready for their final flip, followed by a basting with that delicious sauce. Since the glaze was already pretty thick, it didn't need the time to cook down like a normal barbecue sauce, so after just a minute more on the grill, they were ready to eat. 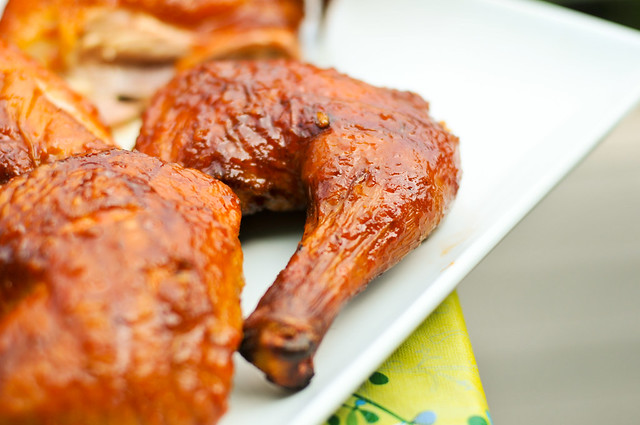 The final product is a true triumph in barbecue chicken. It's smoky, juicy, fruity, sweet, and tangy—so many excellent flavors that come to together into bird that puts those standard tomato-based sauced chickens to shame. Despite being such a successful bird—seriously, you need to try this recipe out—I'm still left wondering what I'm losing following a version of Huli Huli chicken written some 5000 miles away in Vermont. Guess I better start saving for the Hawaiian getaway to find out, right?

Influenced by the traditional Hawaiian rotisserie chicken, these birds are a true triumph in barbecue chicken. They're smoky, juicy, fruity, sweet, and tangy, putting those standard tomato-based sauced birds to shame