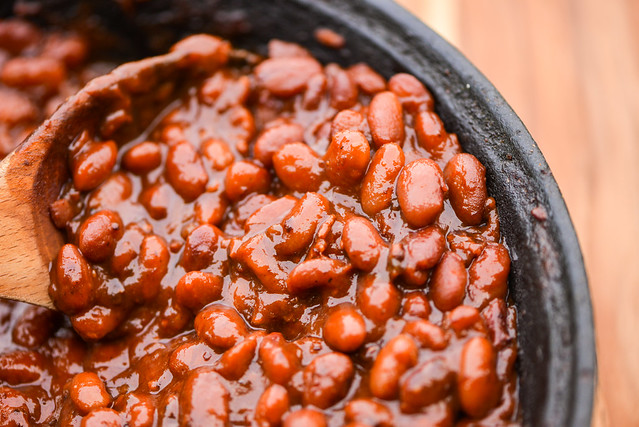 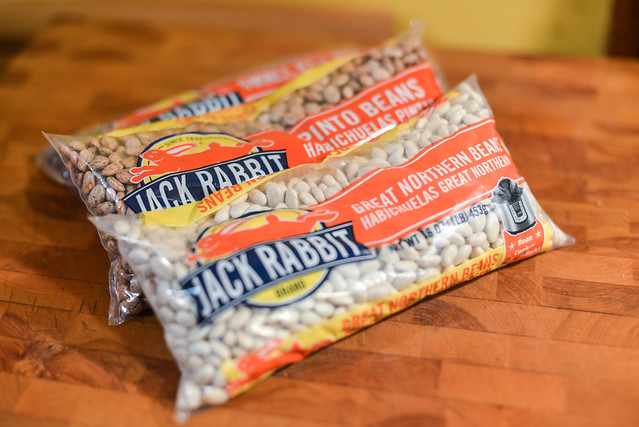 Having made both bean recipes for years now, it was easy for me to pick out the best aspects of each and add my own stamp on it to get me closer to my desired end result. There's no doubt the from scratch beans have a depth of flavor and more tender bean than the recipe that starts with a series of cans. So I began my journey here with dried beans, opting for a variety because I really loved how different beans added additional flavor and texture in Mike Mills' recipe. 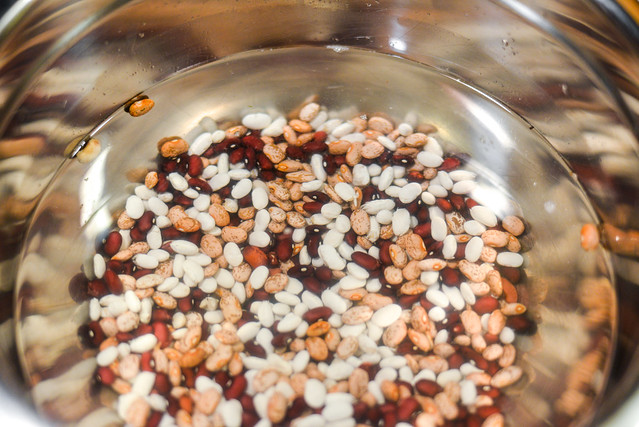 I used an equal amount of three bean varieties—great northern, pinto, and small red beans—to get a pound total, which I then soaked in salted water overnight. Common practice usually forbids salt at this step, but the truth is that soaking in salt water actually results in creamier beans and helps keep the skins from breaking apart during the long cook on top of adding additional seasoning. 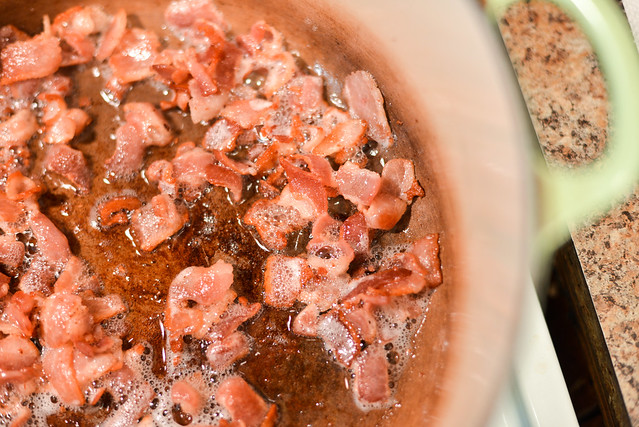 It's hard not to love Alton Brown's recipe that begins with an entire pound of bacon, and while there's fun in saying there's that much salty, fatty pork in my beans, I think it's a bit overkill. So I kept the bacon, but cut it back to half a pound, which, by the time it was rendered and crisp, there was more than enough fat to sauté the veggies in. 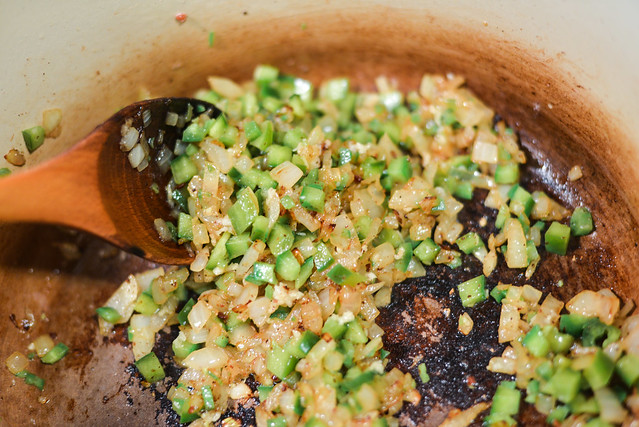 Of which I used onions, jalapeños, green bell pepper, and garlic. I cooked these until softened, a process I also use to start off my own barbecue sauce recipes. 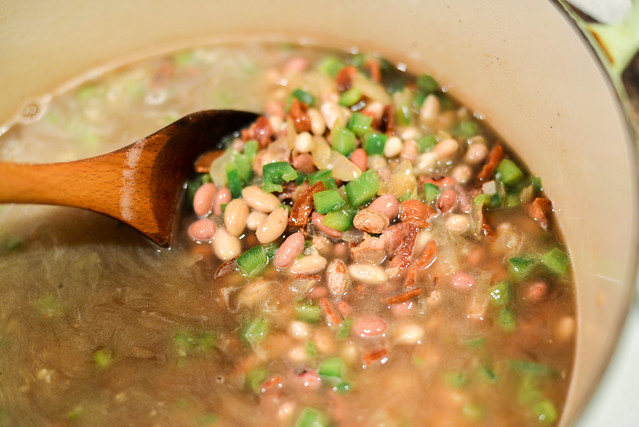 Next I strained the beans and added them in along with chicken stock and water for the liquid. I then let the beans simmer for one hour prior to adding the rest of the ingredients. The reason for this step is that acids can inhibit a bean's ability to cook, so I wanted to let the beans begin to cook before the introduction of items that could alter the process. 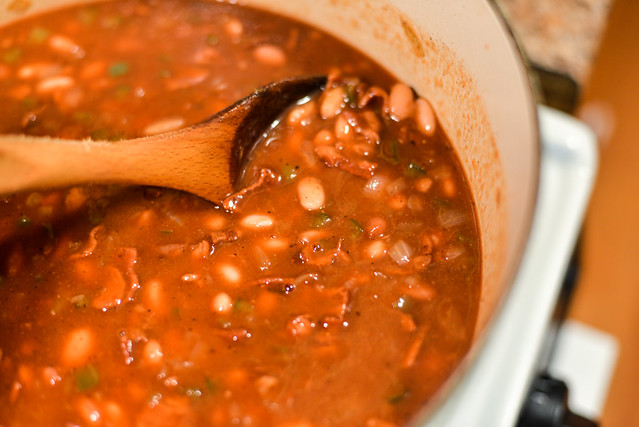 The final set of ingredients were mainly what I would use to create a simple, standard barbecue sauce—ketchup, vinegar, and mustard, along with brown sugar, honey, molasses, barbecue rub, and hot sauce. When added to the still very liquid-heavy beans, it formed a really, really thin barbecue sauce, but there was still hours of cooking ahead, ample time for the sauce to reduce and thicken. 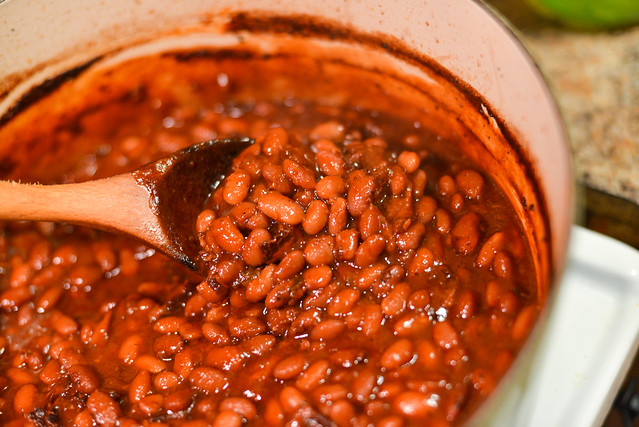 After three hours in a 300°F oven, the beans emerged almost completely soft and creamy throughout and with a much thickened sauce, albeit not quite standard barbecue sauce consistancy yet. So to finish up the cooking and further reduce the sauce, I cooked the beans for their final hour without a lid, after which time they looked like this—intact, soft, and creamy, suspended in a medium-thick, concentrated barbecue sauce. 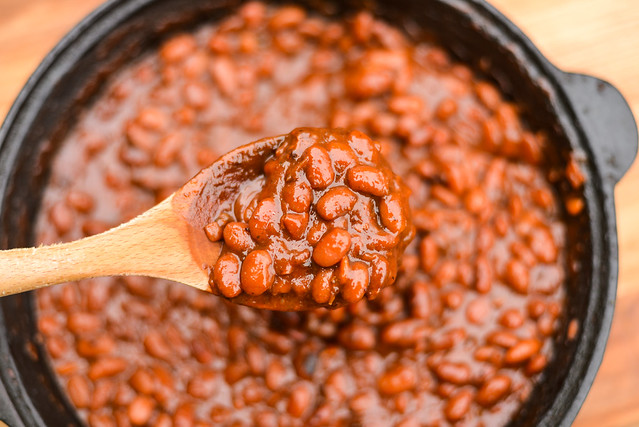 The flavor was pretty spot on too. While Alton Brown's recipe creates a molasses-heavy flavor and Mike Mills' strongly features sweetness, these beans struck a greater sweet and tangy barbecue balance with slight kick of heat to further enhance the overall complexity. Although pleased with the results, I see this as just a start to developing even better barbecue beans down the road. My head is already swarming with ideas like using burnt ends or pulled pork to impart the meaty smokiness that bacon served here, or taking the ingredients in a direction that more closely resembles my barbecue sauce recipe that has adorned awarding winning smoked meats in the past. Still, this current recipe is a step in the right direction and I'm sure it'll produce barbecue beans you're bound to love.

Starting barbecue beans from scratch results in an extra creamy texture with an excellent concentrated barbecue sauce flavor that make them well worth the time.