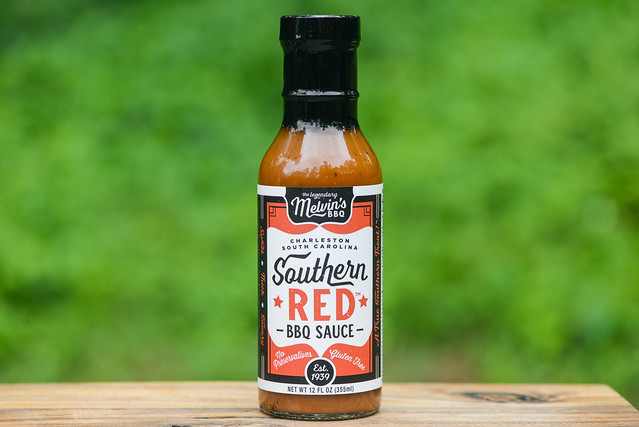 Finding a great footing with mustard, Melvin's Southern Red BBQ has an excellent spicy and complex flavor out of the jar, while veering nicely to being sweeter after cooked. 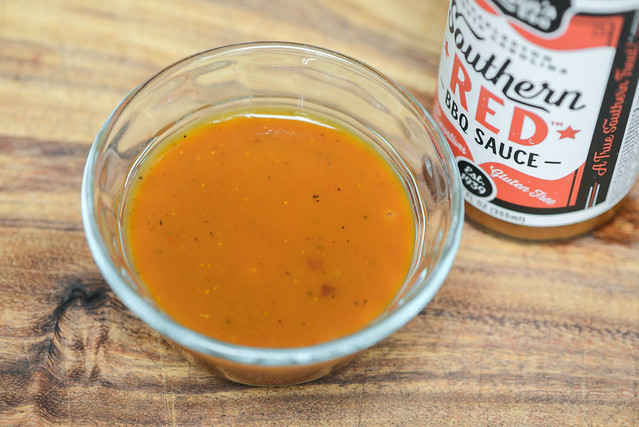 Melvin Bessinger's is the namesake of this sauce, but it was his father, Big Joe, who started the Bessinger family's life in barbecue. Big Joe had developed a sauce that gained some local notoriety, which led him to start a short lived restaurant called Holly Hill Cafe in 1939. It wasn't until after arriving home from WWII that Melvin followed in his father's footsteps and opened Eat at Joe's. Melvin then took a break for college before returning to the restaurant business in 1961 with a barbecue drive-in concept called Melvin's Piggie Park Drive-In. In the 1970s, the Bessinger brand really began to take shape, and then in the 1980s, Melvin's son, David, became more involved in the business and started bottling and selling the family's sauce. The father and son duo then went on to expand to a chain of restaurants under the name Melvin's Legendary Barbecue, then scaled back to just the two locations that remain today in Charleston and Mount Pleasant, South Carolina. At the age of 71, Melvin finally retired, then passed on at the age of 89. David continues to run the Melvin's restaurants and brand, which seem to be expanding their reach and products in recent years.

The initial aroma is an nose tingling mix of tart vinegar, sharp mustard, and sweet ketchup. The mustard and vinegar combo makes this sauce more pungent than most, but there's a medium sweetness that takes some of that edge off. On a few deeper whiffs, the distinct earthy and spicy peppers come out along with a mellow smokiness and a bit of onion.

This rusty orange sauce has a glossy sheen and smooth texture. It's mostly opaque, but it's still easy to see a lot of spices that are mostly small white and black specs, but with a few larger red chili bits floating around. The sauce's thickness is medium-thin and falls off of a suspended spoon first in a large drip, followed by a quick and even pour. As the sauce slows, a few slow drips release before ending and leaving a medium coating of sauce left clinging to the silverware.

The very first taste of this sauce is pretty sweet, but the heavy hand of vinegar and mustard quickly come in and add a lot of tartness to the initial sugary tomato flavor. This creates a really complex profile nearly instantaneously, which continues to grow more layered as notes of onion, garlic, and pepper emerge. As the sauce settles on the tongue, the bite of mustard gains more prominence, then mixes with the heat of the peppers to create a burn that, when combined with increasing vinegar tang, leaves a mouth tingling heat with a hint of smoke as the aftertaste. 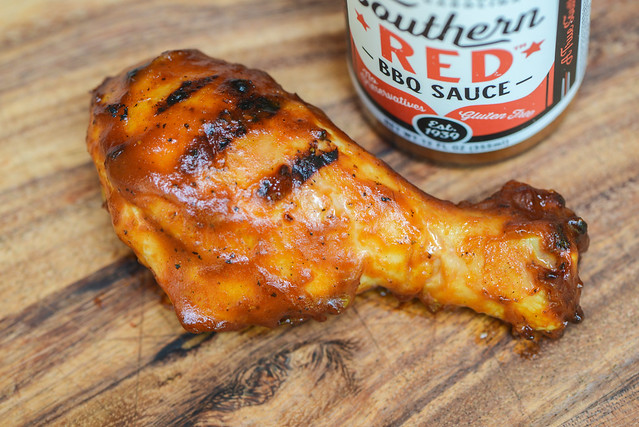 The sauce coated the chicken in a thin, even layer that baked down well over indirect heat. When moved directly over the fire, there was some really nice caramelization with no burning or burn off. The sweetness amped up after being cooking, striking a more harmonious union with the vinegar and mustard. This also left the heat experienced out of the jar more subdued, but not totally gone. It was a flavor that complimented the light taste of the chicken very well, working with the meat rather than masking it.

Melvin's Golden Secret was one of the earlier sauces I pulled off the shelf after moving south to North Carolina, and it left me fairly impressed. Since then, I've seen the Melvin's packaging change, as well as the sauce line-up expend, so I figured it was a good time to give one of the newer varieties a shot, and I'm glad I did, because this Southern Red variation was even better. Mustard can be a hard card to play in barbecue sauce due to it dominating presence, but this sauce uses that pungent and spicy flavor really well against the ketchup and vinegar, creating a great tartness and heat out of the jar, and a well balanced sweet, tart, and spicy profile after being cooked. It was a mix that worked especially well on chicken, which is usually a good match for mustard, and I think it would be equally great on pork products like chops, ribs, and smoked shoulder. I can imagine it would also make a great dip for beef, although I would opted for the stronger and spicier flavor experienced out of the jar in that application over the sweeter taste after being cooked.