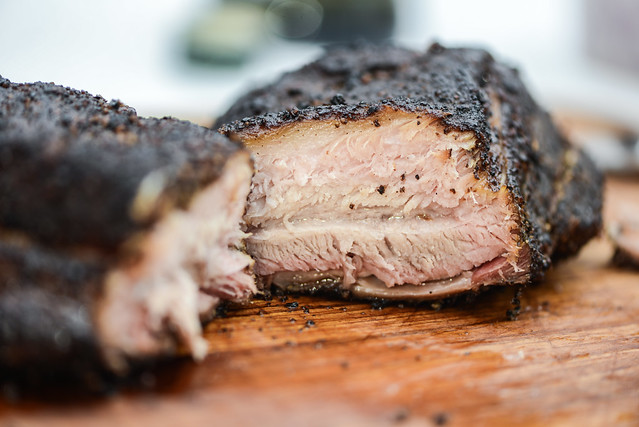 I'm starting to get ready for my annual pilgrimage to Texas. While holidays with the in-laws serves as the official reason for the trip, I use this time of year to also try out at least a couple new (to me) barbecue joints. Luckily the barbecue scene in Houston is starting to take off—what used to be slim pickin's has bloomed into numerous really excellent options for slow smoked meats. Killen's is regarded as one of the best-in-breed in Houston, and I totally concur after ordering all the meats on my first trip there, plus a side of chicken fried steak for good measure. While there wasn't one low point in that meal, it was oddly the pork belly that left an impression on me since this cut has rarely stood up against the beef ribs and briskets at other establishments. This particular piece of belly had luscious, soft, and flavorful fat paired with the ubiquitous Texas salt and pepper bark that combined to make some fine slices of barbecue. So in anticipation of a trip filled with such delectables, I decided it's an apt time to share my attempt at some Texas-style smoked pork belly. 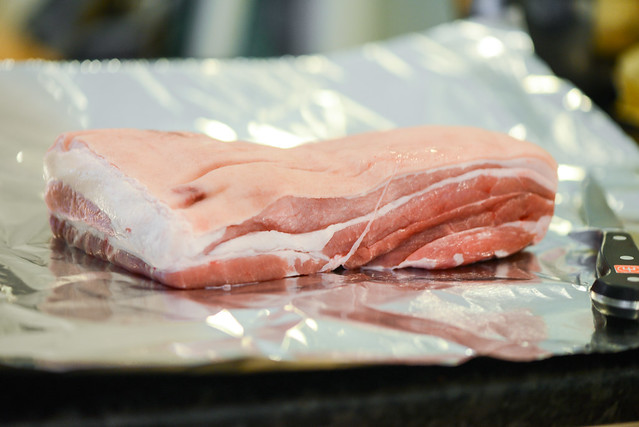 Pork belly has been no stranger to my smoker, but previous attempts have been mediocre at best. My issue has consistently been not being able to get that super soft, melt-in-your-mouth fat that makes the best pork belly a delight. I've been learning the ways to achieve this though, so had high hopes that this time around, my two pieces of boneless belly would be a marked improvement over past takes. 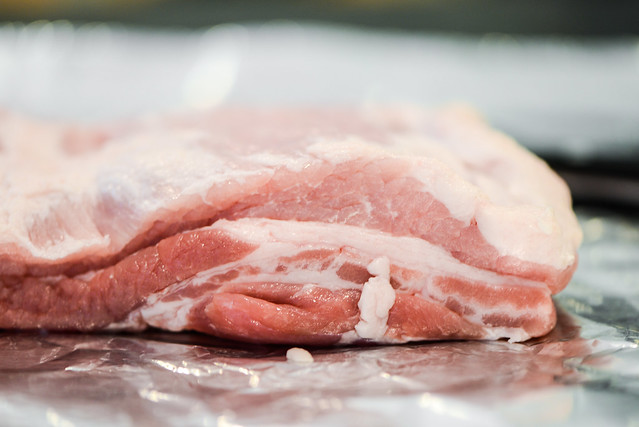 I got my belly at the local Asian mart—I've always found ample belly at good prices at these speciality groceries—which came with the skin on. Since slow smoking doesn't make for great pork skin, and to increase the surface area for the rub, I removed the skin from each piece of belly. 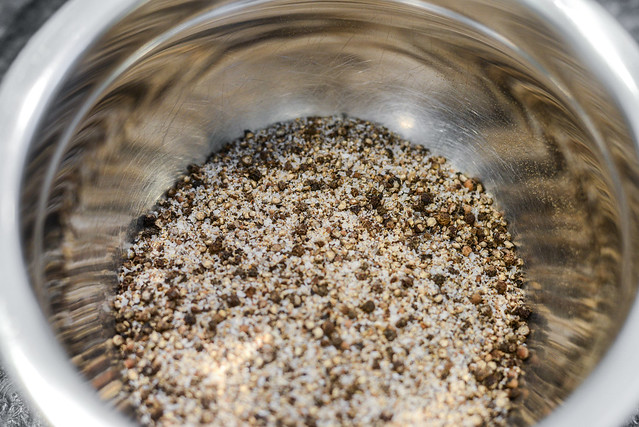 I then mixed together a rub that was comprised of nothing more than salt and pepper. While the simplicity of the rub is great, there are a couple things to keep in mind to make it ideally Texan. First, the pepper should be coarsely ground, which helps create a sharp peppery bite and a bit of crunch in the final product. To achieve this, I always start with whole peppercorns that I grind in short pulses in my spice grinder, checking between each pulse to ensure a proper grind. Second is the balance between salt and pepper. I used to go half-and-half here, but have become more attracted to super peppery crusts, so have upped my pepper content accordingly to get the right bite. 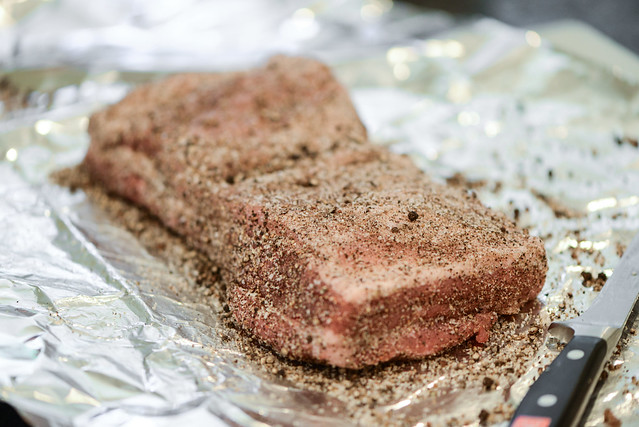 Once I had the rub made, I coated the belly with it in a liberal fashion. I always worry I'm going to end up making my meat too salty when I do this, but I've yet to encounter that problem, so don't be shy with when applying the rub. 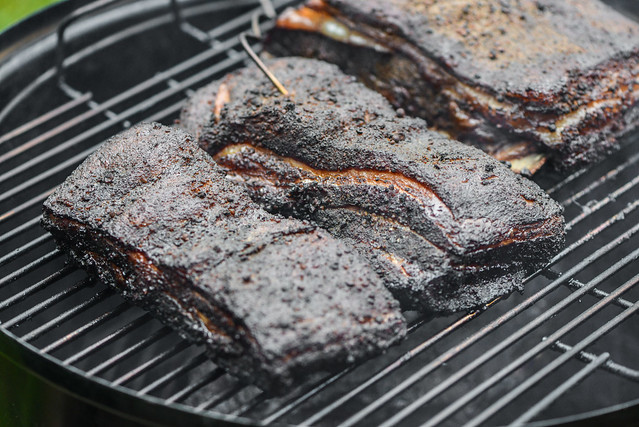 Then it was off the smoker, where I was hoping to correct past errors in my pork belly process. I had been cooking my belly to 165°F or just above, but in reality that's just the temperature the meat is official "done," but not when the fat has rendered and softened to its ideal consistency. I've been cooking my brisket and beef ribs to 203°F, at which point they're jiggly and have that wonderful soft, oozing fat that makes barbecue so great. 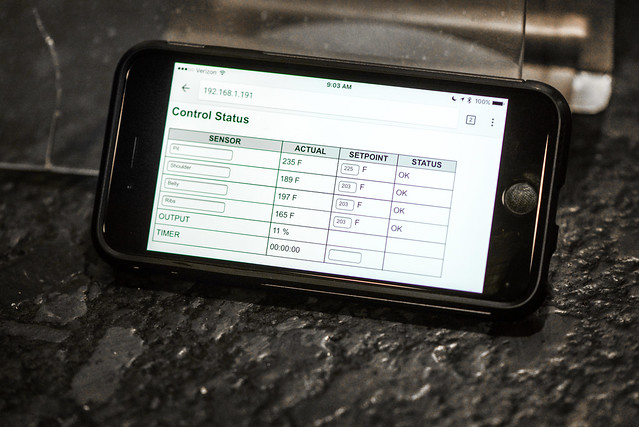 So I employed my trusty BBQ Guru and set the target meat temp to 203°F on the belly and let it smoke at 225°F until it got there. This clocked in around the 7-8 hour mark, which was many hours longer than I had cooked belly in the past. 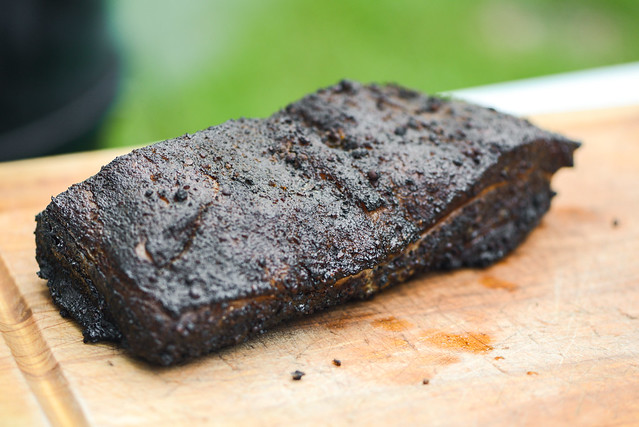 When I removed the belly from the smoker, it has the tell tale jiggle that made me giddy thinking I had achieved the ideal belly I was after. It wasn't quite time to find out though, since I've also learned a rest for a couple hours is also pretty essential for getting the perfect consistency. So I wrapped each piece of belly in plastic wrap—you can used butcher paper or foil as well—and placed them in the Cambro until guests arrived and it was time to serve. 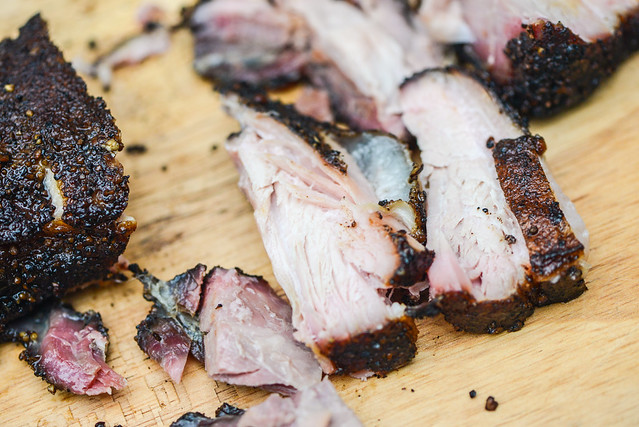 That period of time ended up being longer than the couple hours rest I was shooting for, and when I finally did unwrap the belly to serve, it had cooled more than I had wished. Still, the meat and fat were soft and delicious, and bark was intensely peppery with a light crunch that mimicked the Texas barbecue I love. I feel like if I had sliced into the meat sooner, it would have been closer to ideal, which is a huge accomplishment for me. Being close wasn't so bad though as it just whet my appetite for the true stuff down in Texas, which I'll be eating up in just a weeks time to end this year on a high note.

All it takes is salt and pepper and a long smoke to make incredibly delicious pork belly with luscious, soft fat and an intensely flavorful crust.