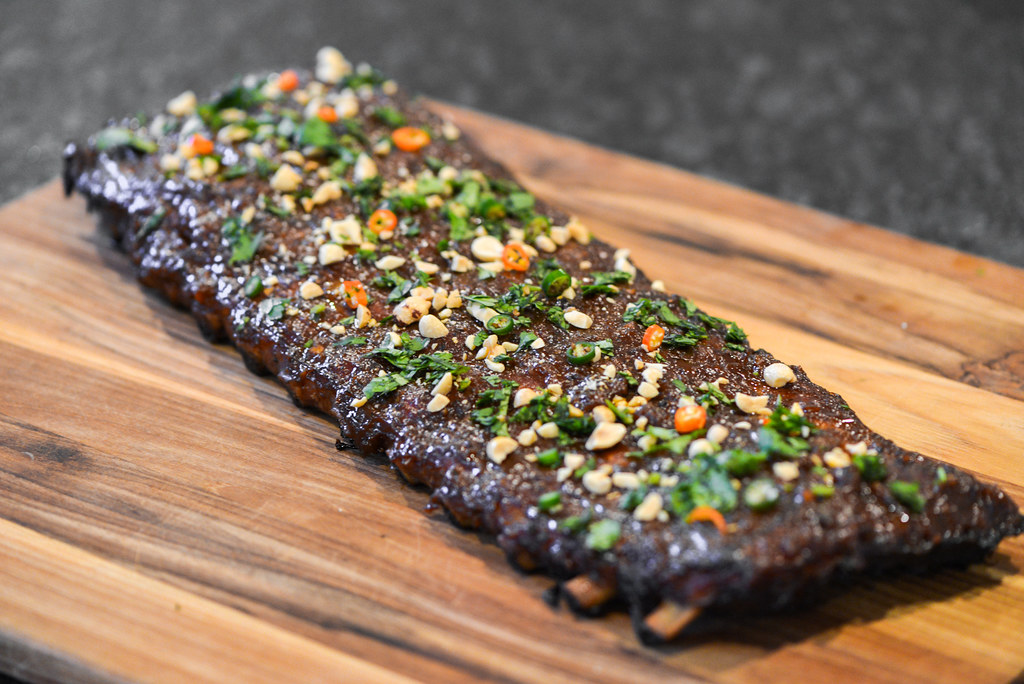 The single best barbecue experience I had in 2019 was at Blood Bros. BBQ in Houston. That's saying a lot given that I also had my first taste of many other establishments churning out top tier smoked meats—Truth BBQ, B's Cracklin' BBQ, Grady's Barbecue, Sam Jones BBQ, and Buxton Hall. What was so exhilarating about Blood Bros. to me was not just the quality, and every meat I tried was stellar, but the effortless melding of barbecue with other cultural influences. In general, this is what makes eating in Houston more exciting than most places, the melting pot of cultural inputs ends up outputting food in a manner that doesn't feel forced—it's not "Fusion" food, it's just their food. A group of Vietnamese friends started up Blood Bros., and the menu feels like an organic a sampling of everything they grew up eating in Houston that resonated with them. It's mostly Asian, but not strictly so, and sometimes Vietnamese, and other times not, like Thai sticky peanut butter ribs, which was one of the standout meats for me. During this quarantine period I was having very fond memories of those ribs and decided to make my own recipe for them as an ode to Blood Bros. 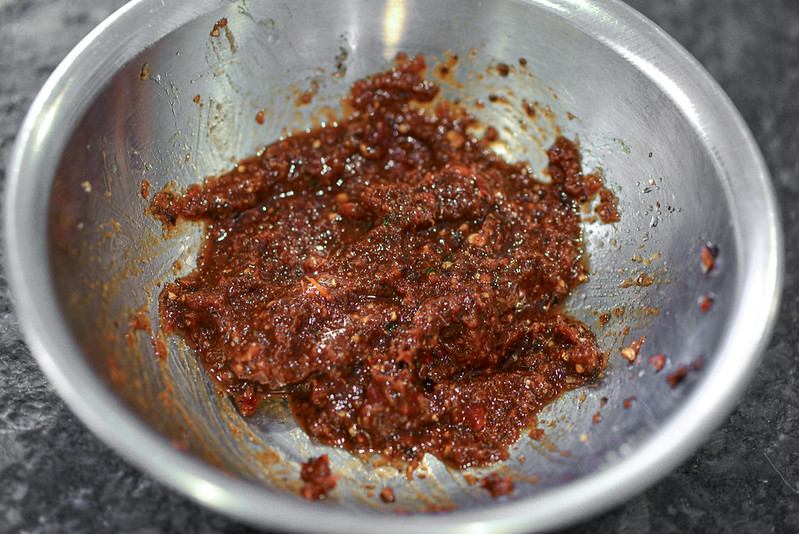 I have no idea what the Blood Bros. recipe is for these, I just knew that they blended Thai cuisine and American barbecue really well and didn't hold back on the spicy. So I used my personal knowledge of each cuisine to devise a recipe I thought would do the inspiration justice. It started with some homemade red curry paste, and I highly recommend making this stuff at home in a mortar and pestle for maximum flavor. I used the curry paste as the base of a wet rub, to which I added fish sauce, brown sugar, salt, and black pepper. 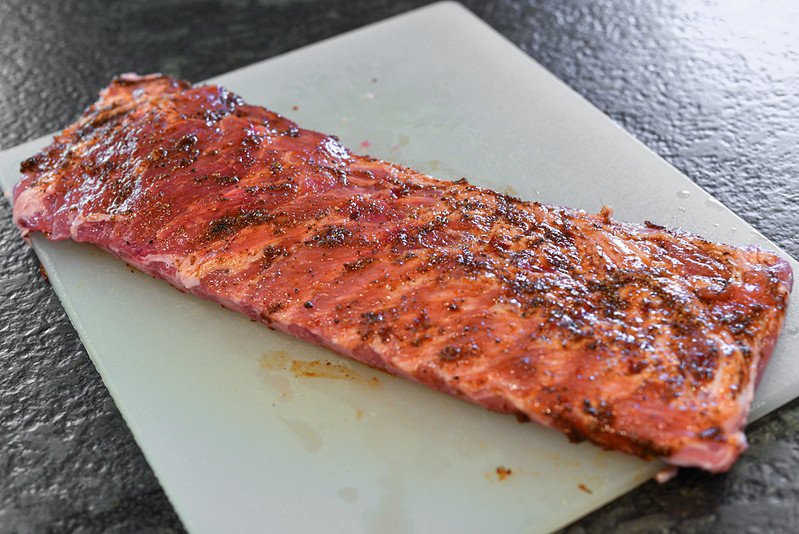 I then slathered the sauce all over a rack of St, Louis cut spare ribs. They definitely looked a lot different than the dry rubbed ribs I'm used to making, but I figured different is the right development path for this recipe. 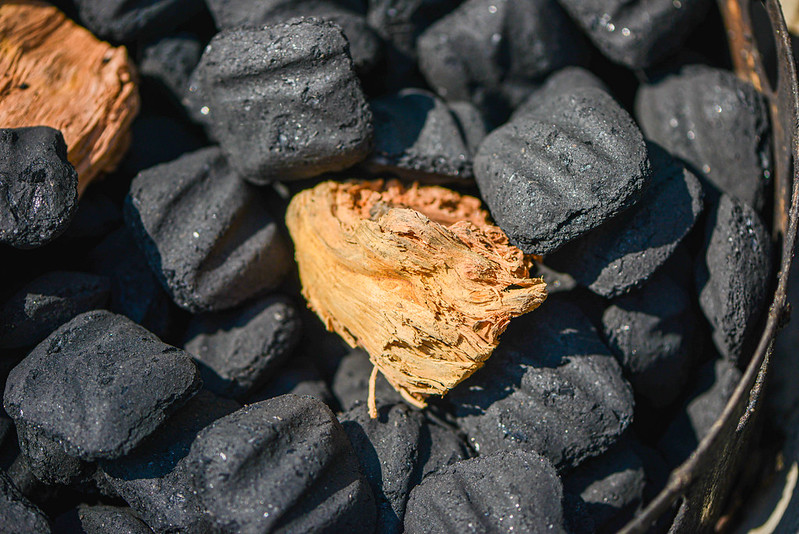 Next I placed the ribs in the smoker that I had running at 225°F. I used a couple fist-sized chucks of apple wood to impart a light smokiness. I chose a more mellow wood because I thought without the heavy spice layer of normal barbecue, heartier woods could end up tasting a little too overpowering in this scenario. 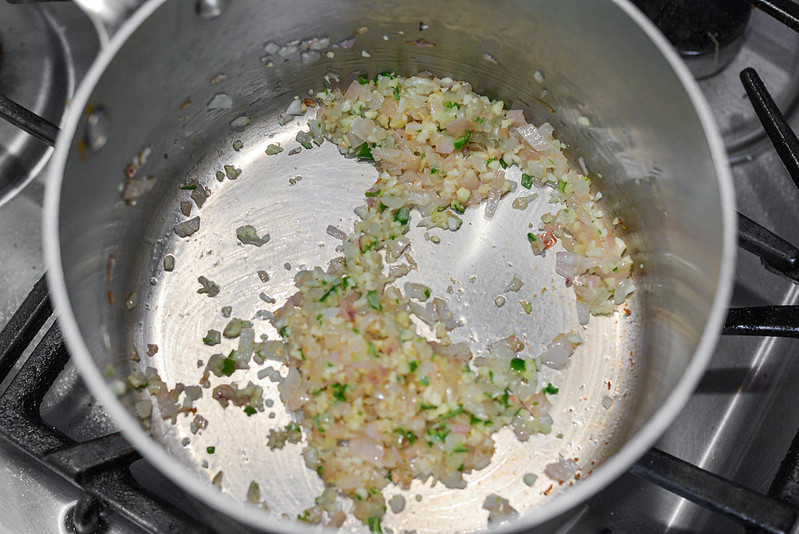 Once the ribs were going, I went back inside and started on the sauce, which is the heart of the flavor of this recipe. I looked at my normal barbecue sauce recipe and started subbing out ingredients and changing quantities in a way that would make it taste like a melding of American barbecue sauce with Thai flavors. This began by swapping onions for shallots, which I sautéed and then added in a larger the usual amount of garlic along with ginger and Thai bird's eye chilies. 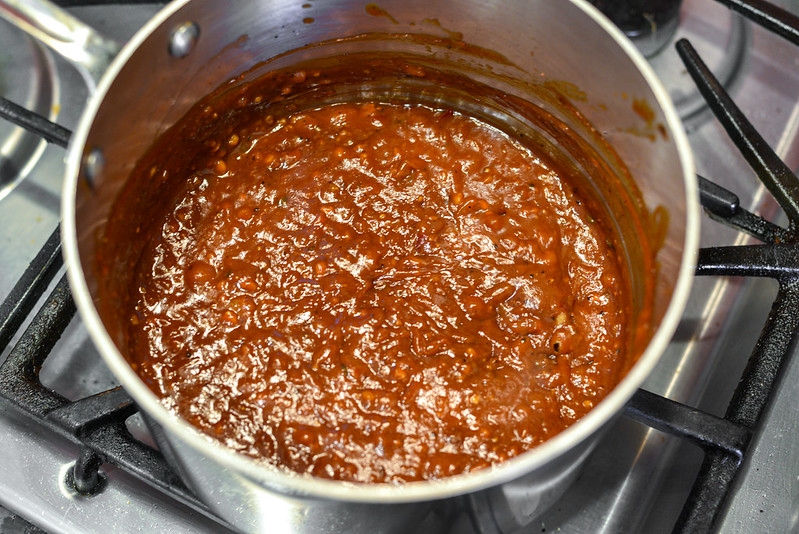 Then I whisked in the foundational ketchup with a fair amount of creamy peanut butter, providing the ribs namesake flavor and sticky character. To that I added rice vinegar, brown sugar, soy sauce, red curry paste, fish sauce, and lime juice. After cooking for bit to meld the flavors and thicken slightly, I seasoned the sauce with salt and pepper but something felt like it was missing. I was racking my brain on what to add to give the boost of flavor I thought was absent, and finally I had an idea—I added in a squeeze of tamarind concentrate and that ended up providing the perfect sour note and little extra savoriness to make the sauce feel complete. 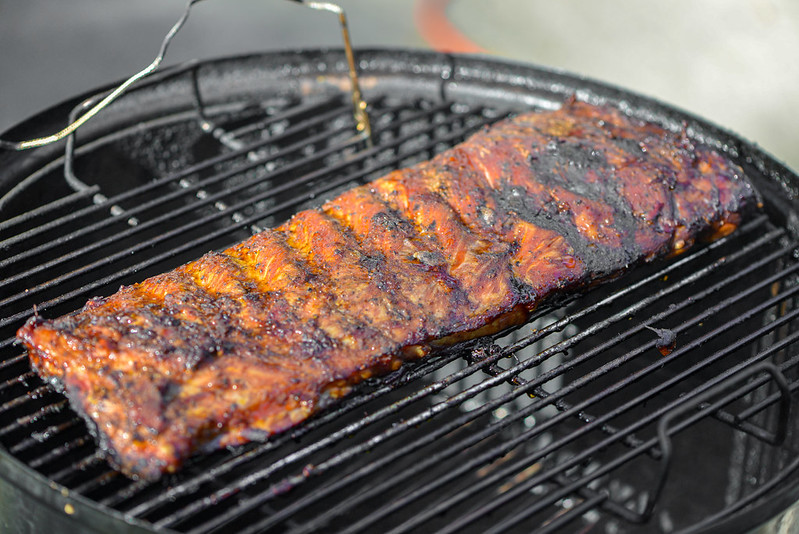 With the usual barbecue ribs, the exterior starts to darken and turn overly brown or black after a few hours of smoking, which is why I spritz the ribs with a liquid—normally apple juice—when they hit a good mahogany color to avoid overcooking the rub. I had originally planned on doing that here, using rice vinegar to spray them down, but the ribs didn't turn a deep red until right at the end of cooking, so it wasn't needed at all. 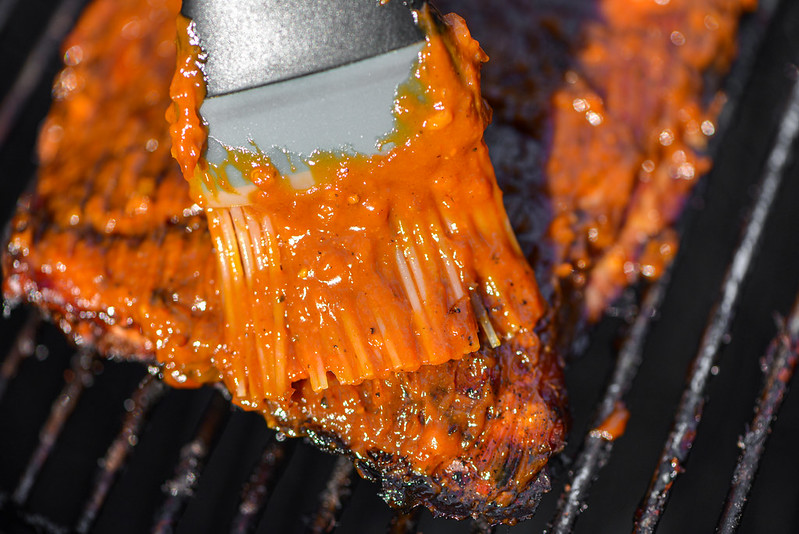 At the same time they started to look beautiful, they were also almost done, which I tested by lifting one end of the rack with a pair of tongs and judging how they bent. So with just 30 minutes or so of smoking time left, I applied the sauce generously, wanting that thick and sticky sauce coating I experienced at Blood Bros. 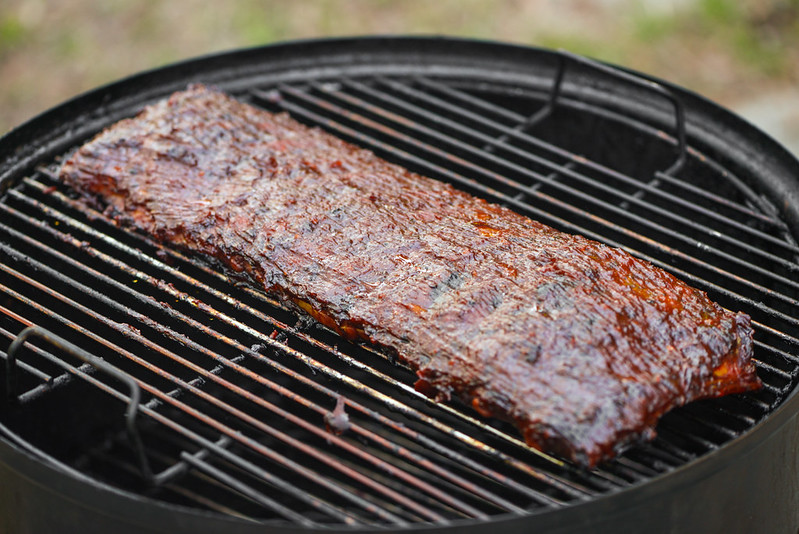 And after the last stint in the smoker, they were done and looked good, but they were about to get a whole lot prettier thanks to a garnishing of cilantro, peanuts, and pepper slices. 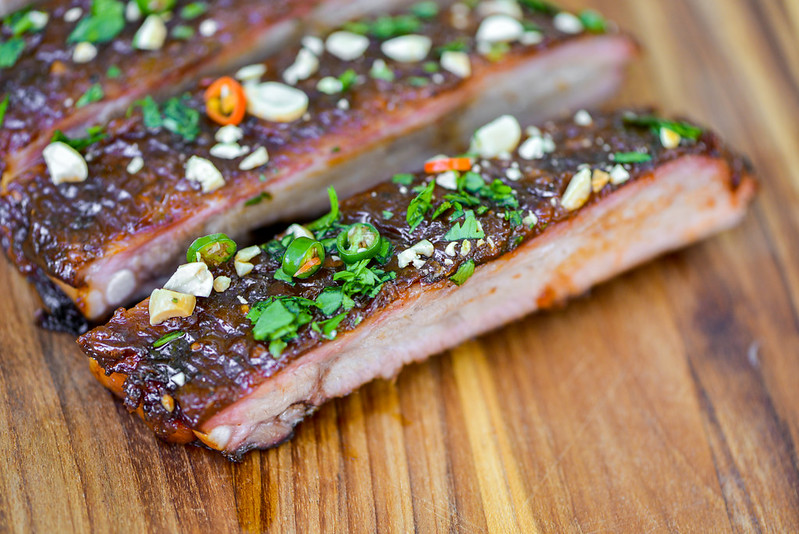 By now my mouth was watering and my anticipation for a taste of these ribs had grown even more, making the obligatory photo shoot before eating feel even longer than it normally does. Upon that first bite, I was brought back to my memories of how excited I felt eating each dish at Blood Bros. While the ribs tasted familiar, they were not an exact copycat recipe, which in a way I preferred because they were more representative of my experience and skills, even if the original concept was not my own. They still had the seamless blend of cuisines going on for them, with the smoked pork and complex, layered sauce making them solidly American barbecue, but the overall flavors more reminiscent of Thai cuisine with a strong heat backed up by acidity and complimentary herbal notes. The peanut butter in the sauce also pushed them further in the Thai direction while also delivering the "sticky" promise of the recipe title. I can't wait to go back to Blood Bros. and try even more things, but the only problem is that there's so much great and utterly unique food in Houston that returning to the same place twice is not something I do often with all there is to try there that really can't be had, or at least doesn't feel the same, anywhere else.