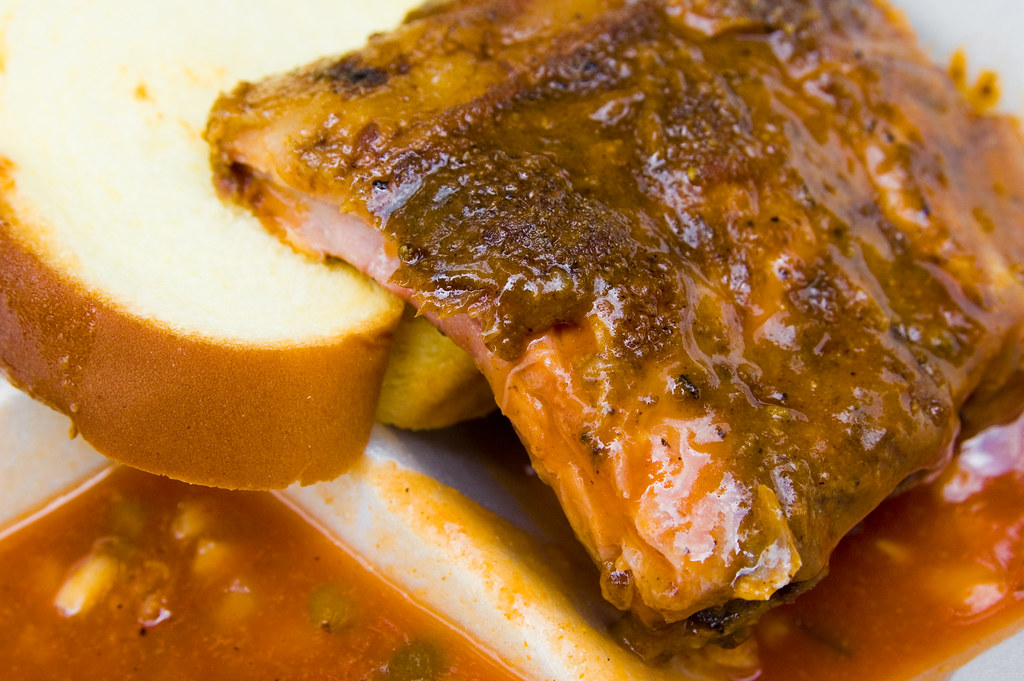 When you normally exit the subway in NYC during the summer months, you're greeted by the wonderful aroma of urine and/or rotting garbage, but there's two days a summer where, upon your exit at 23rd St and 5th Ave, you're nose is filled with nothing except the sweet smell of barbecue. When this happens, you know the Big Apple Barbecue Block Party has finally arrived, and the long wait is finally over. Although I wish it could last forever, I know that good things don't last, so I get as much 'cue into these two days as possible. 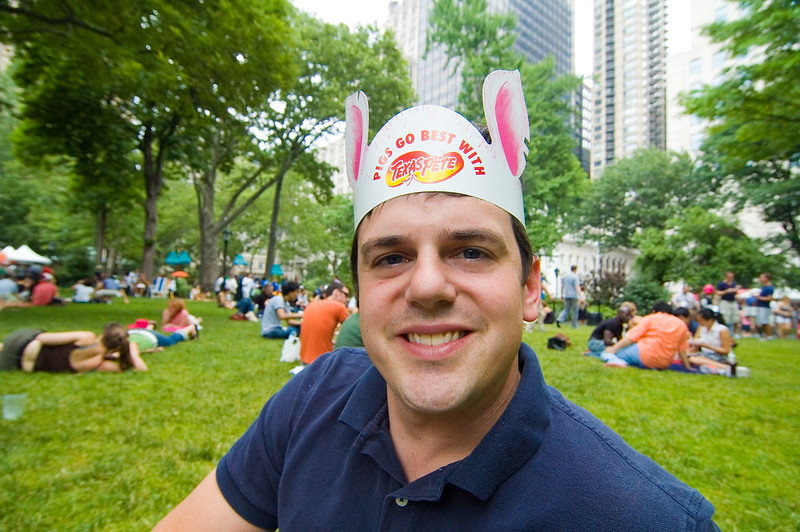 Even though I obviously go for the 'cue, bbq is always more than just food to me. I like nothing more than sitting around with all my friends, chatting and chowing down...now that's real bbq. The block party is no different and I make sure I can get a nice posse together to accompany me to the event. I buy myself a Fast Pass, which allows you into special shorter lines to get your cue, and then share the pass with all my friends. This year's group was almost completely different than last years, so it was nice being able to share my Block Party knowledge with a new set of friends, and watch them as they experience some of the best barbecue you can get in this country. 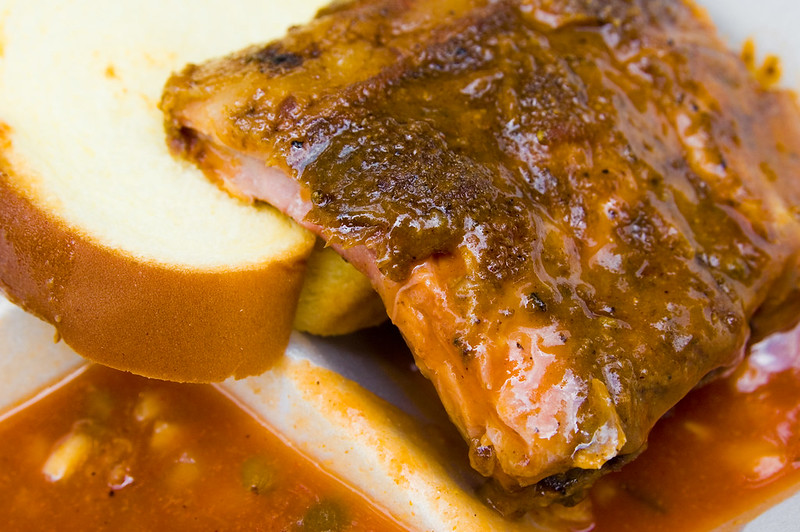 First stop of the day was for Mike Mill's championship ribs. We strive to get to the party as close to opening time as possible just for these ribs. Expectedly, these ribs are some of the most popular at the event, so the line often gets long and the tend to run out before the day is done. The attention these ribs get is totally just, seeing as they can do no wrong. The meat is always perfectly tender, the slightly spicy, slightly sweet sauce mixes very well with the rub, and although they're pink all the way through from smoking, the smoke flavor never overwhelms. As long as Mike Mill's is back next year, I'll be there first thing again for another helping of these excellent babies. 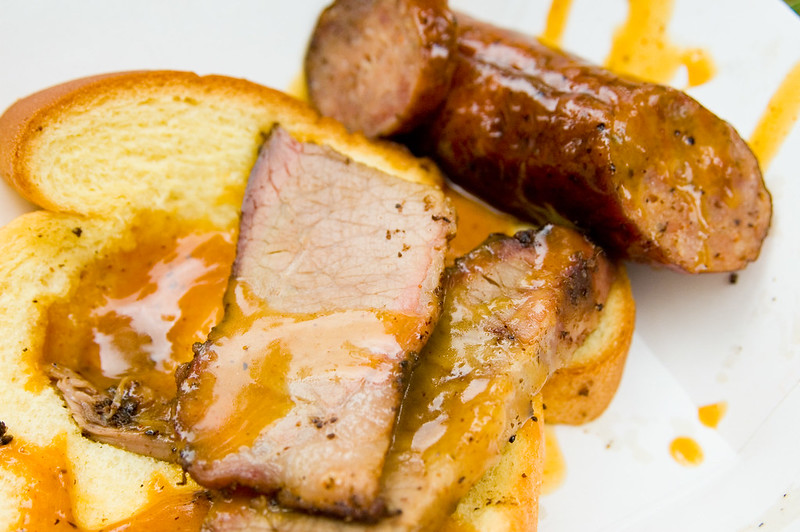 Second up was the Salt Lick for some brisket and sausage. This has consistently been my second favorite at all the block parties, hence that it was the second 'cue I had to have. This actually did not live up to previous years though. My brisket was nice and tender, but a little dry compared to what I remember from the past. The sausage was still dead on though, and I can't get enough of them, so I'm now thinking of trying my hand at making these hot links for the next Meatwave. 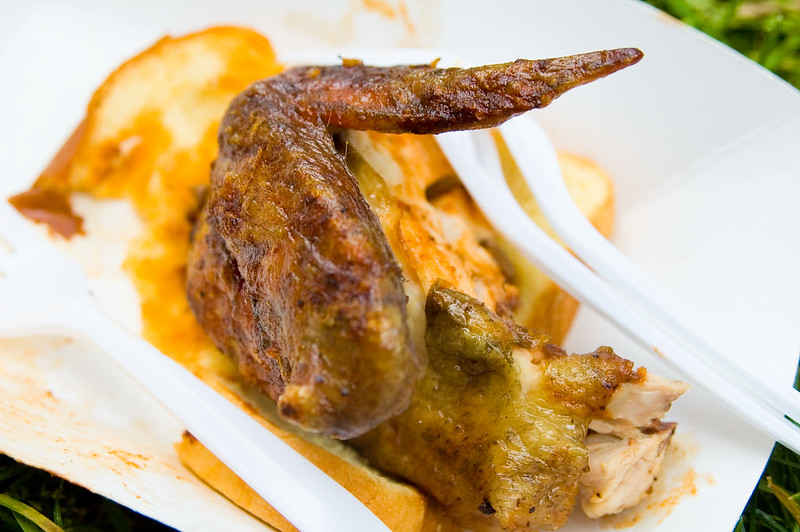 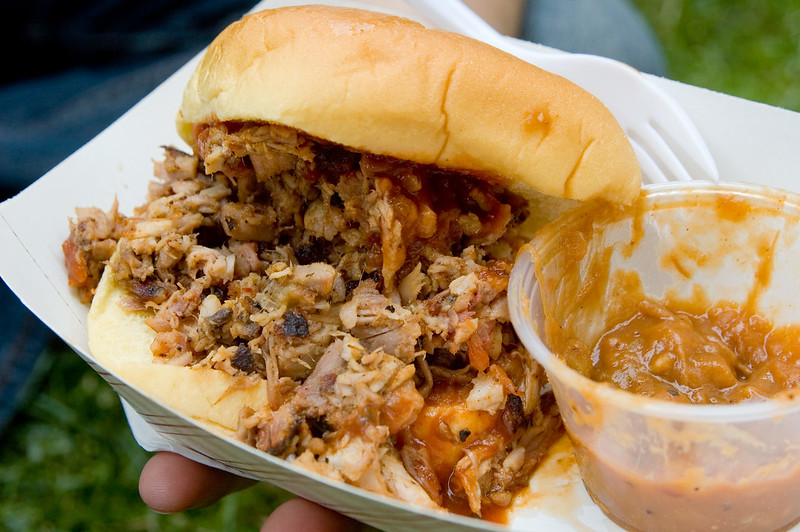 The Fast Pass was also used by Lauren to get some barbecued chicken from Blue Smoke. Then by The Mikebot for his favorite of favorites, pulled pork that came from Dinosaur BBQ. I did not personally try either of these, seeing as they were not my lunch, but I heard good things from both eaters about their respective 'cue choices. 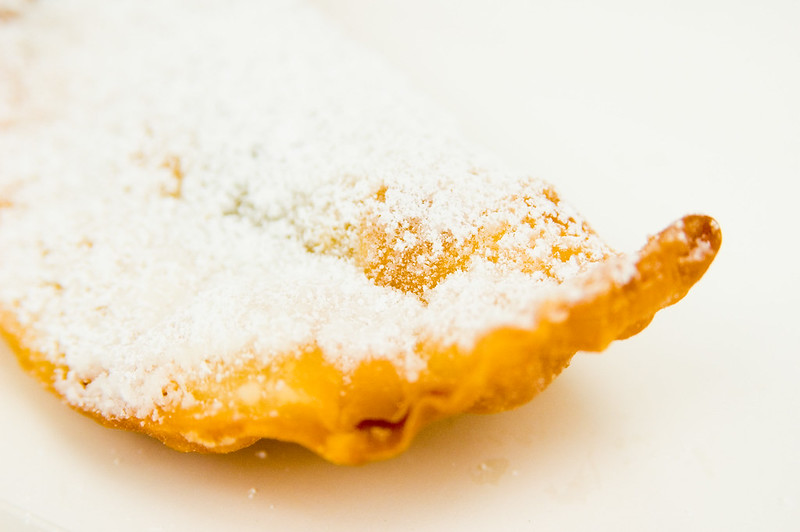 Now for one of our most anticipated new items, and ultimately the biggest letdown, the fried pies. k-money dropped $4 on one of these tiny little pies, which she did enjoy, but in the end could not find the value in it. When I read "fried pies" on the BABBQ site before coming, I guess I was kinda expecting a regular piece, just deep fried, and that would be amazing. Instead they were small pocket pies, like empanadas, stuffed ( the term used loosely here, since there wasn't much stuffing) with apple pie filling. I don't know if my own imagination killed these, but it they just seemed wimpy and couldn't hold their own compared to everything else being served around it. 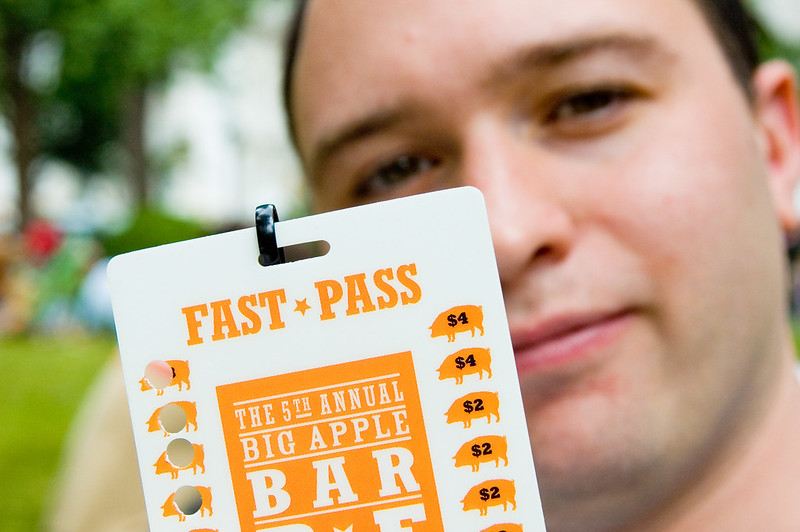 So one day down, and about 90% of the fast pass already used. It's already almost midnight, so I best be getting to bed, since the sooner I sleep, the sooner tomorrow's 'cue will come, along with a new set of friends to share with. Until then I'll leave you with some barbecue scenes to fill your dreams. 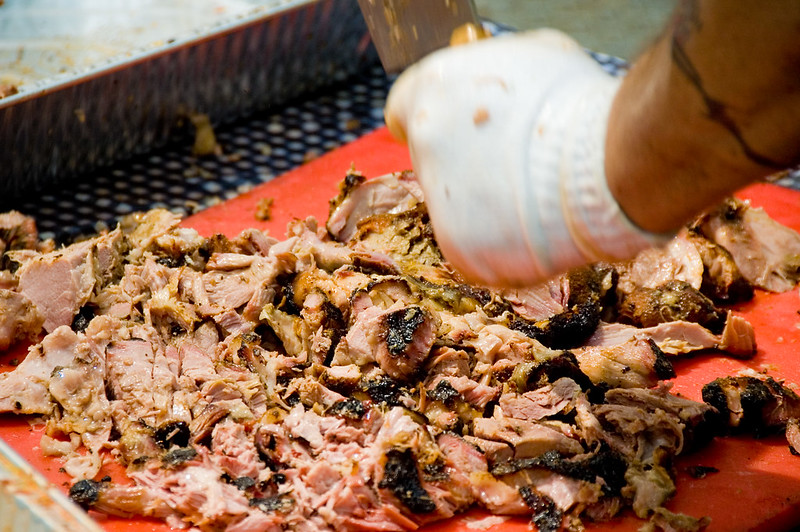 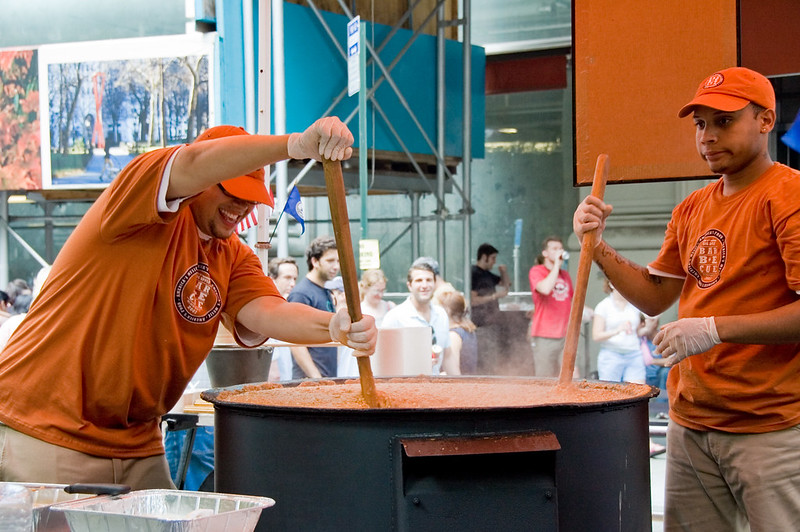 Stirring the Brunswick Stew at the Proclamation Stew Crew. 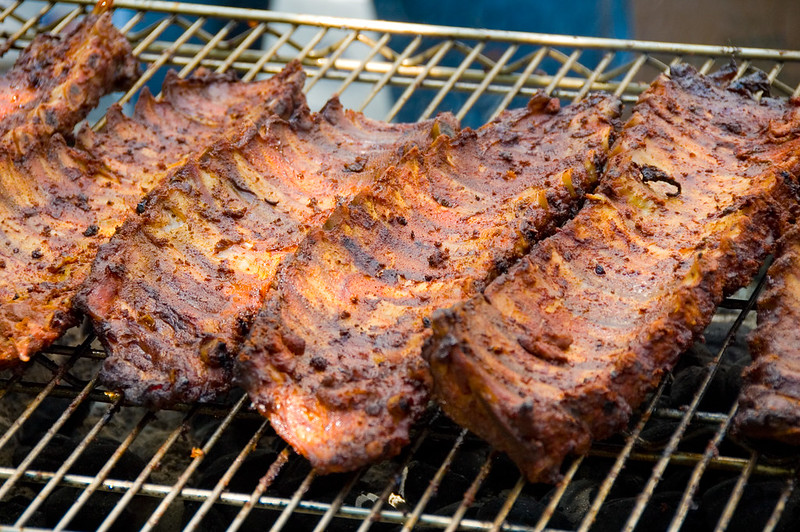 Baby Back Ribs at Rack & Soul. 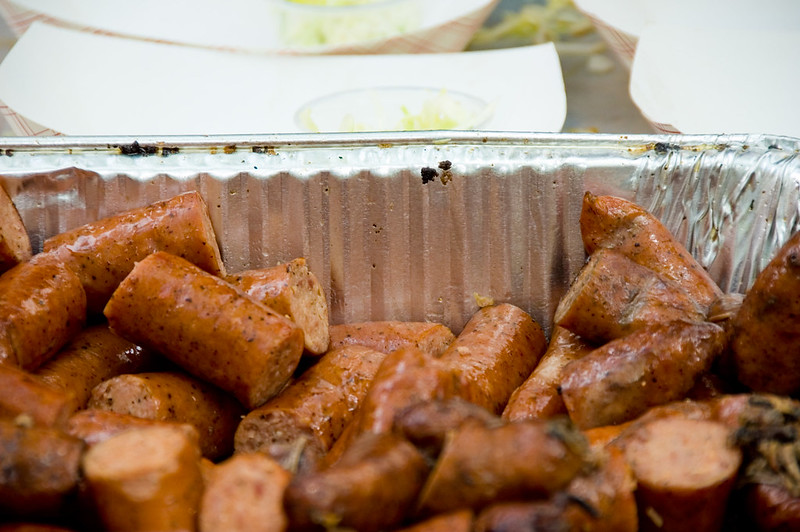 Sausage at the Salt Lick. 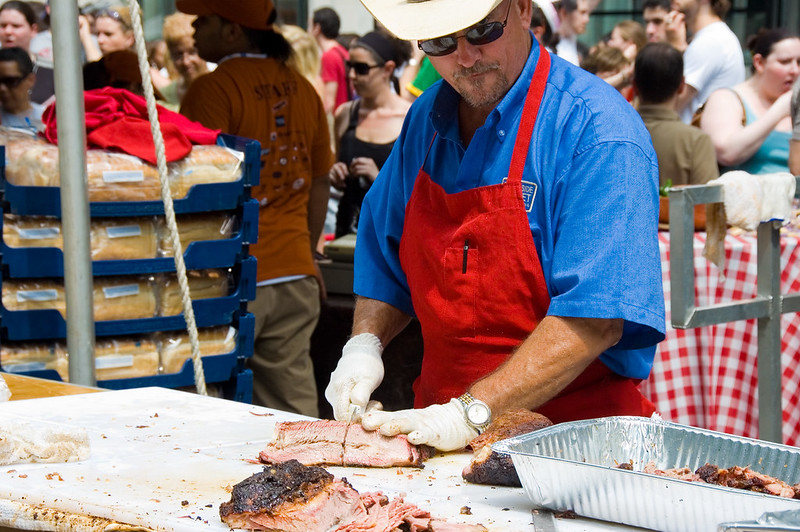 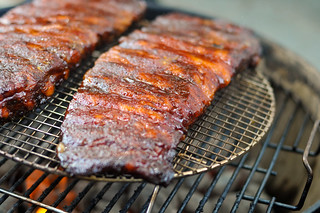