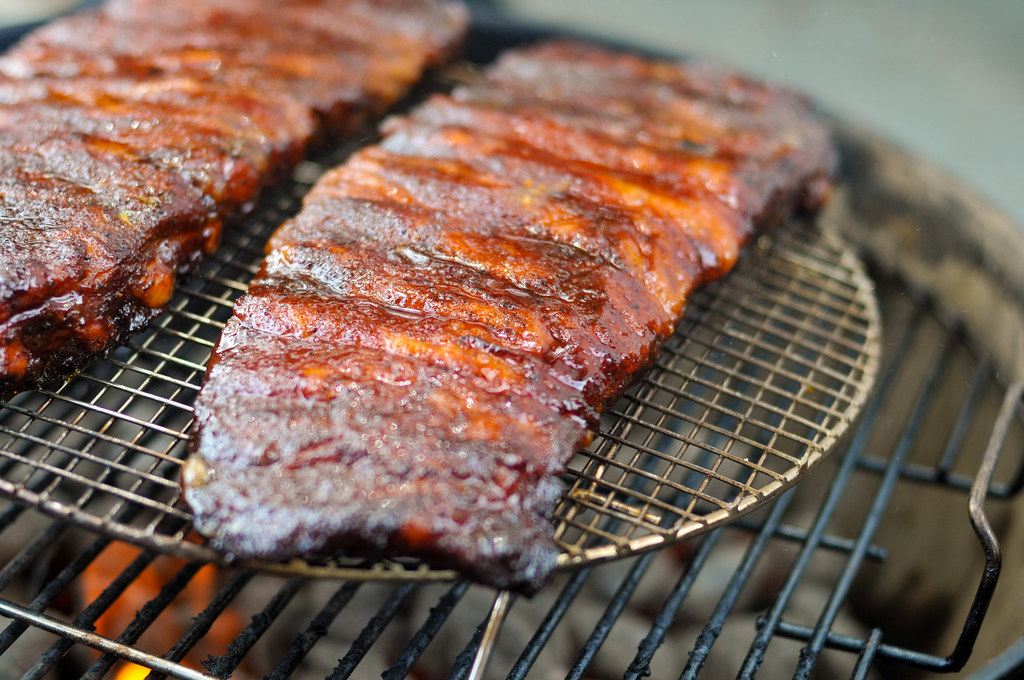 Ever since my first visit to a barbecue competition I've been thinking about jumping into the game. Joining into a strong community of people who share a similar passion seems like a logical step to take my cooking from the backyard to the next level. Although the basics of cooking in a competition are the same as I'm already doing—rubbed, cooked low-and-slow, then sauced—there are techniques and flavor profiles that set apart award-winning 'cue from what you find in a backyard or at a restaurant. I admittedly know little about this side of barbecue, so I was grateful and excited when Clint Cantwell, the pitmaster behind Smoke in Da Eye, let me join him for a day of cooking at the Battle of the BBQ Brethren, a sanctioned event out on the Island in Manorville, New York. 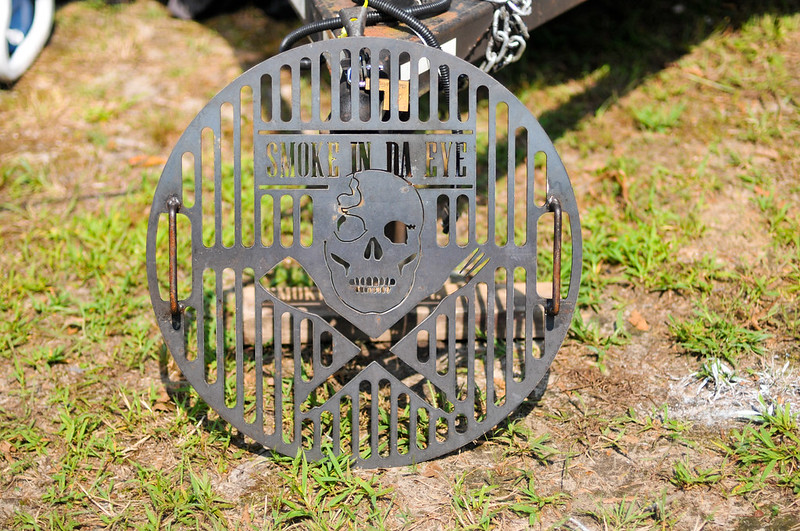 I first met Clint back at Grillin' on the Bay in March and quickly found him to be one of the most welcoming and easiest pitmasters to talk to—it helped that we have common interest in blogging and he's also the editor at Kingsford's grilling.com. I was already familiar with Smoke in Da Eye due to this winning team's heavy media coverage everywhere from CNN, to Fox 5, to Serious Eats, but I was happy to finally meet the man in person. As I got out of house more and to barbecue events around New York, I've been seeing the same faces again and again, with Clint being one of them, so I felt no hesitation in answering a call he made for a little help at Battle of the BBQ Brethren. 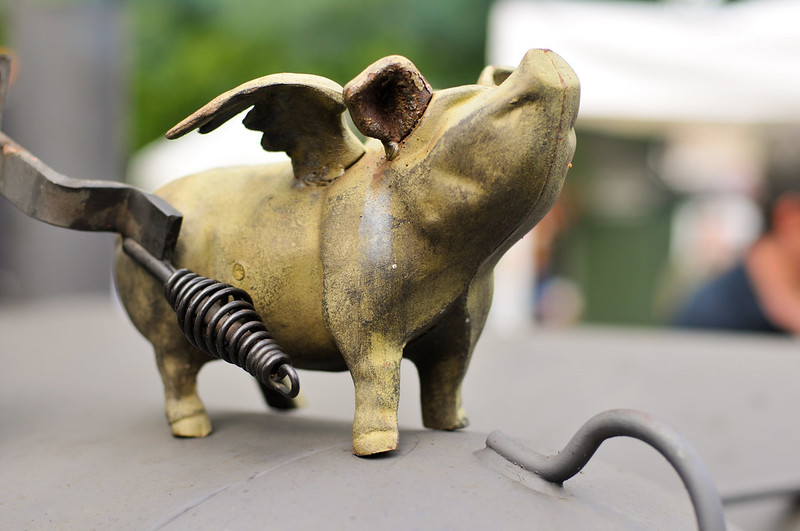 This particular competition is two days, with a New England Barbecue Society sanctioned grilling component on Saturday and the KCBS barbecue competition on Sunday, for which I volunteered to help out Clint.

On the train that Sunday I was lamenting my choice of day a bit as I sped through southern Long Island towns, not seeing much out of the window due to the heavy rains limiting visibility. Arriving in Speonk right in the middle of a downpour, I caught a cab to Manor, arriving at the muddy, tent filled site around 10am. 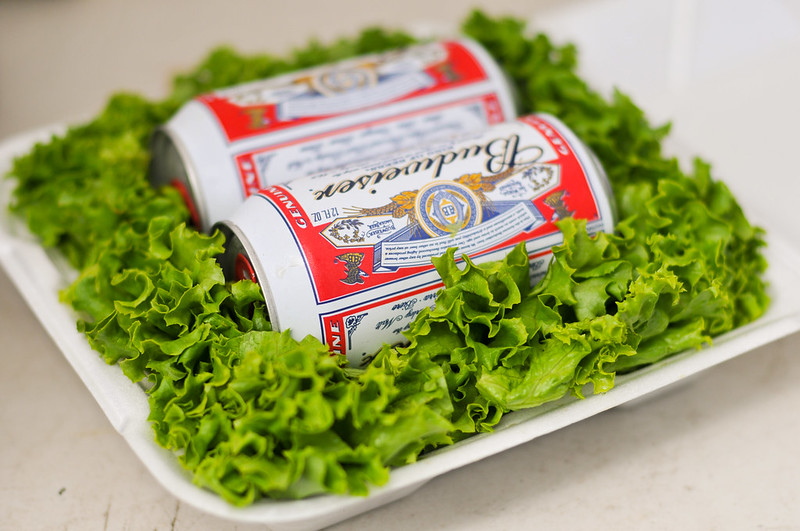 With Saturday night at his disposal, Clint already had most of the meat prepped and smoking by the time I showed up, including all boxes filled with lettuce and holding beers (some that I later drank) to imprint the space that the meat would later fill. 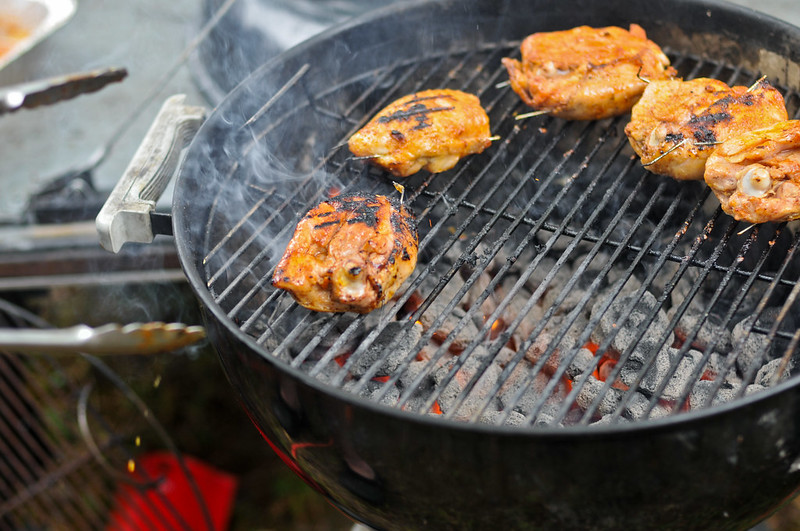 The first turn in was chicken at 12pm. This was the calm before the storm as the first hour and half was spent lazily checking brisket temps, watching ribs, and waiting for the chicken to slowly cook. It wasn't until the last 15 minutes prior to turn in that things started to amp up with a sudden turn to the hectic as the chicken needed to be quickly grilled to give the skin a slight crisp and color. 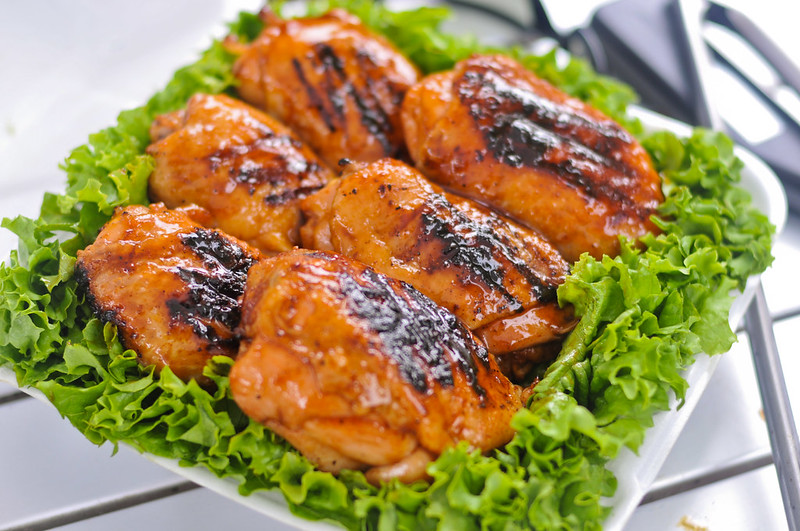 In the 5 minutes before noon, Clint picked the most consistant pieces of chicken, dapped them with a little sauce, and artfully arranged them in the box. While he wasn't happy with the state of the chicken skin, the thighs I ate while he was out on box delivery were filled with a sweet and tangy flavor, and me and my fellow teammates nearly finished them all off. 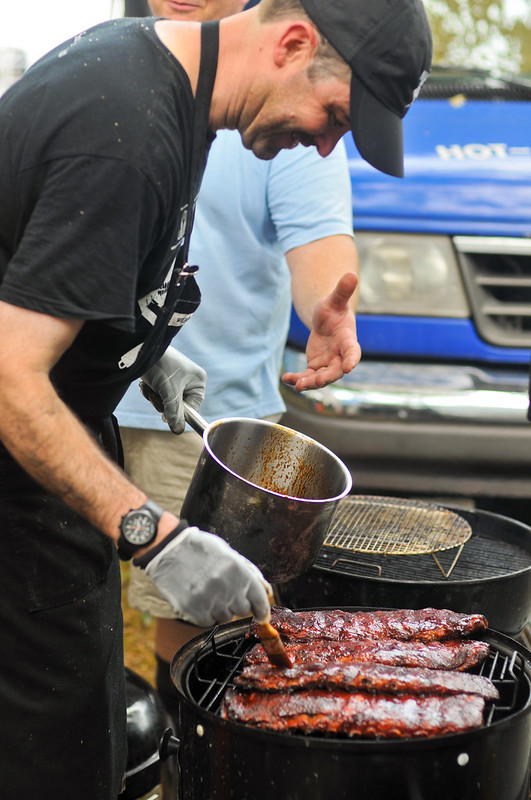 Eating had to be done fast as the next turn-in, ribs, came only 30 minutes later. When we first pulled the ribs from the smoker, we all knew these were going to be killer—they had just the right bend and picture-perfect bark. With a little finishing sauce done on grill, they were ready to be boxed. 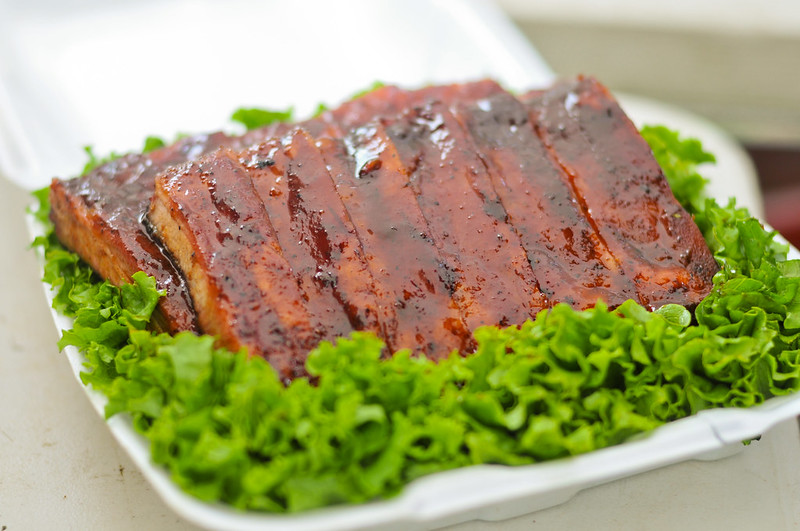 Like the chicken, Clint picked the best looking of the bunch—12 ribs out of 48—boxed them and gave them a final touch-up. Judging by looks, we all felt that we had a true a true winner on our hands, a sentiment that was only further solidified once we dug into the remaining racks. The ribs were cooked perfectly and had sweet finish with just a little spice that gave a balance to the sugars in the rub. 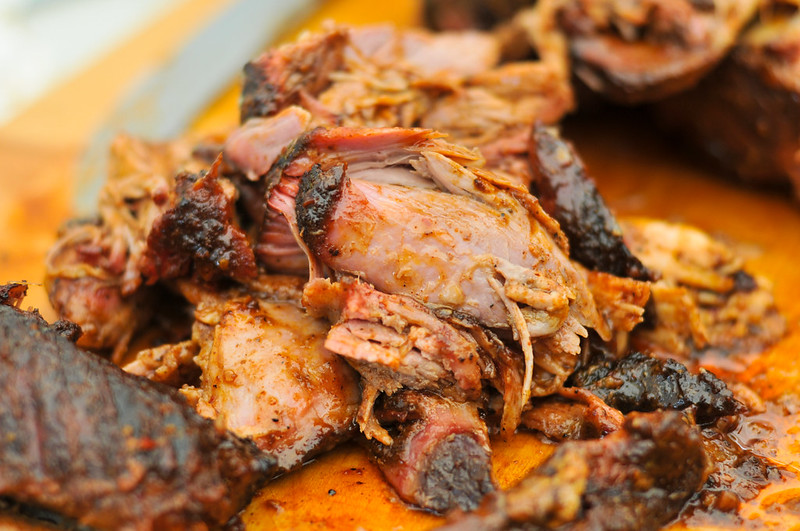 As I finished my last rib—I ate 1/2 a rack of these wonders—it was time to start on pork. With the butts done early in the morning and just being held all day, there wasn't much to do except pull them and add some of the meat juice that was resting in the foil back into the pork to drench each piece in flavor. 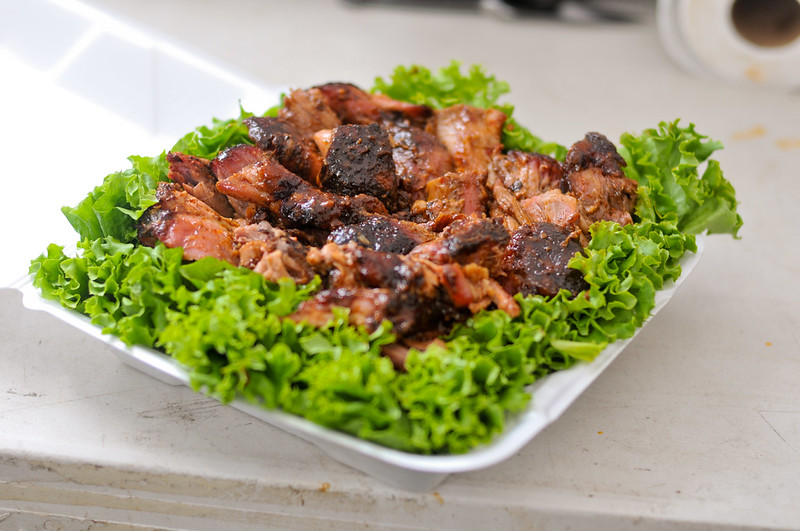 While I'd seen rib and chicken boxes prior to this weekend, I had not seen how pulled pork was boxed, so this was particularly interesting to me. I watched Clint feel for the most tender pieces of pork that also had a nice portion of bark, then arrange those he deemed worthy in the box to make a giant pile of meat seem more appetizing then you might expect. Since the pork was already so flavorful with its own juices, this only got minimal sauce to add a little glisten to the presentation. 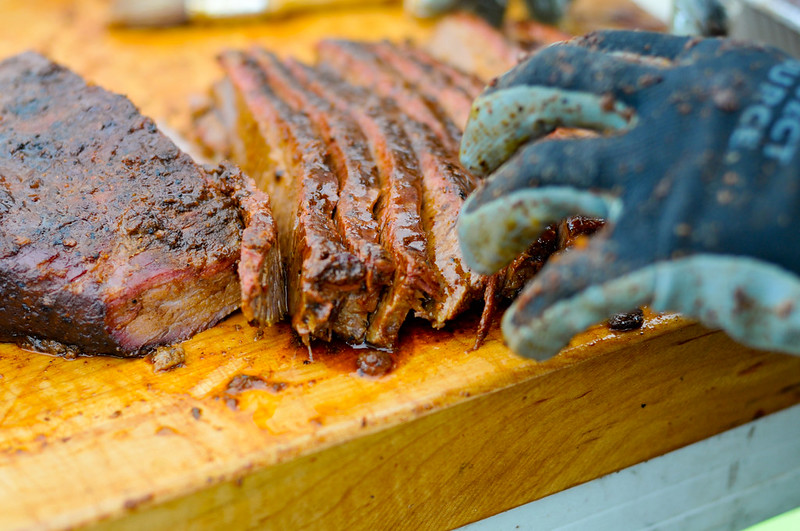 The final turn in was brisket at 1:30. Prior to slicing, we gave the whole briskets a little time on a hot grill to give the bark a little extra crisp. Then the flat was separated from the deckle and the flat was sliced and deckle was cut into chunks. In contrast to brisket I've made at home, which has the minimal flavors of a simple rub and smoke, this brisket oozed a beefy juiciness from and injection done prior to cooking. Each bite was so packed with flavor that we were all certain this was as much of a winner as we deemed the ribs. 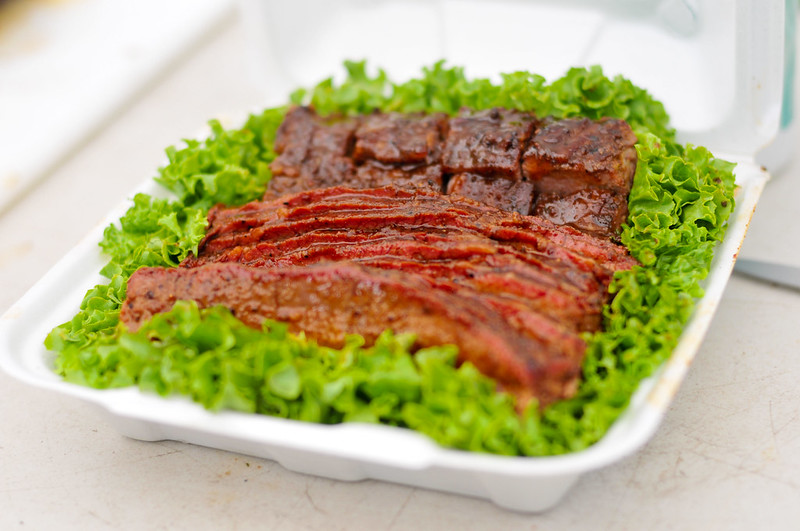 Content with what we had, the brisket was boxed and run over for the final turn-in. While that was happening, I indulged in more than healthy amount of the fatty, delicious deckle as the pressures of the day were over and things took a more relaxed feel. 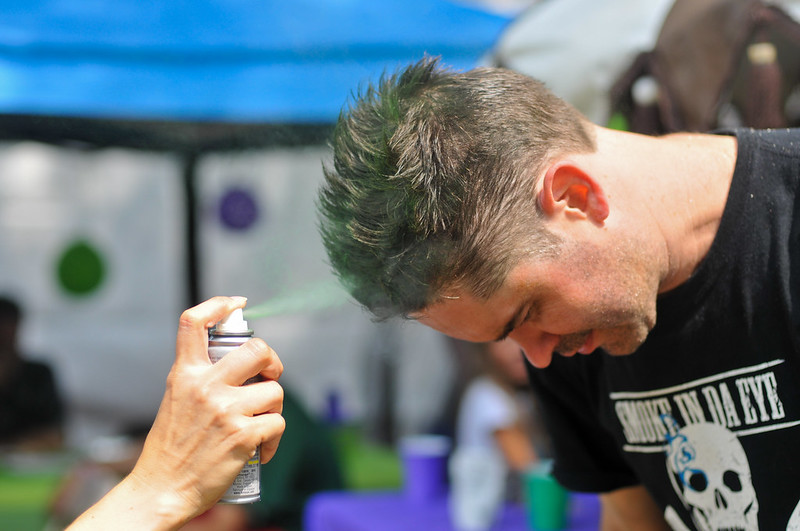 With the hard work over, it was just a matter of waiting for results 3 hours later. In this time, we took advantage of what was now a beautifully sunny day—though a tad humid for my taste—to walk around and take in some sights and more food. Clint got the green hair treatment from our neighbors at Smokenstien & The Monster Crew. 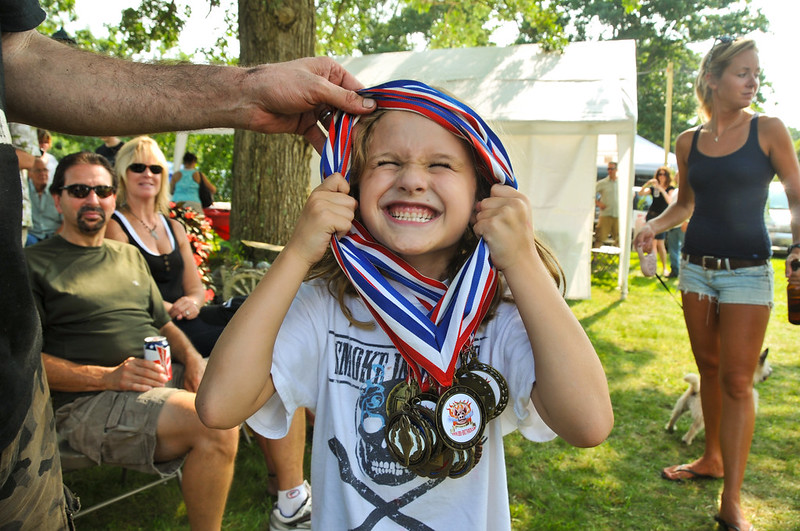 After a couple beers and some downtime, we started to pack it up, but the announcing of the results came quickly. At that point, everyone stopped what there were doing and headed to the large tent, where the barbecue had earlier been judged, to eagerly await who would take home top honors. While anxiously awaiting the announcements, Clint's daughter Anna showed off some of his previous achievements. 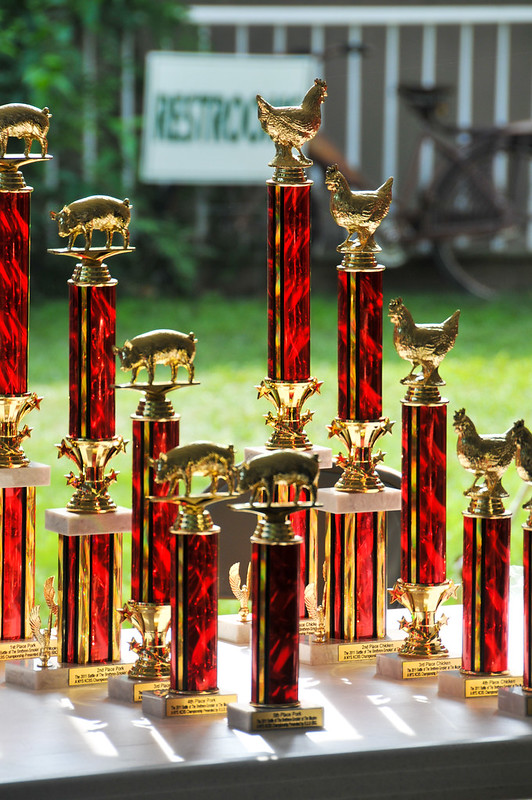 So how did we do? Clint was on with his chicken predication—we didn't even place in the top ten. Directly following was a big win though, with ribs taking a strong 3rd place. That win was immediately followed by a ribbon for 8th in pulled pork. Finally, we were all left a bit dumbfounded when we didn't rank in the top 10 in brisket, as we all felt we had a winner on our hands with a brisket that was stronger than any other we tasted. 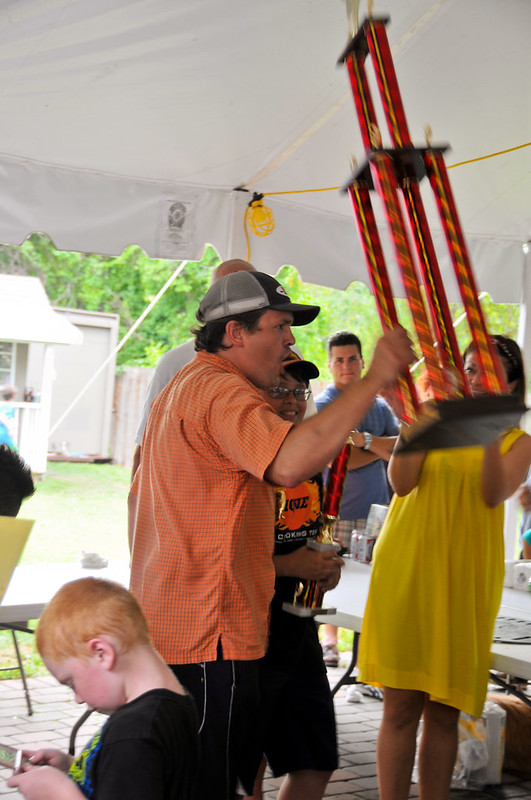 While two decent wins were not enough to bring us to the top three in the competition, seeing the excitement this grand honor brought to other teams was a pleasing feeling. I-Que took the top billing on top of a long line of great seasons for them.

At the end of the day I found myself exhausted, but happy, and swimming in thoughts of my own entry into the barbecue circuit. I learned a bit from watching Clint and others on what I need to get myself started up, but with such a variety of techniques and flavors I experienced, it will probably take me years to figure what works best to win competitions. Will I even make it that far? Only time will tell, but my wife is already scared on how far I may end up taking this and I haven't even begun! 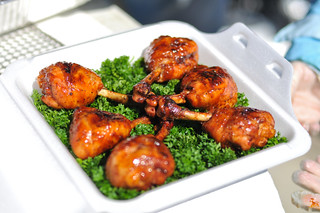