How to Grill Hot Dogs 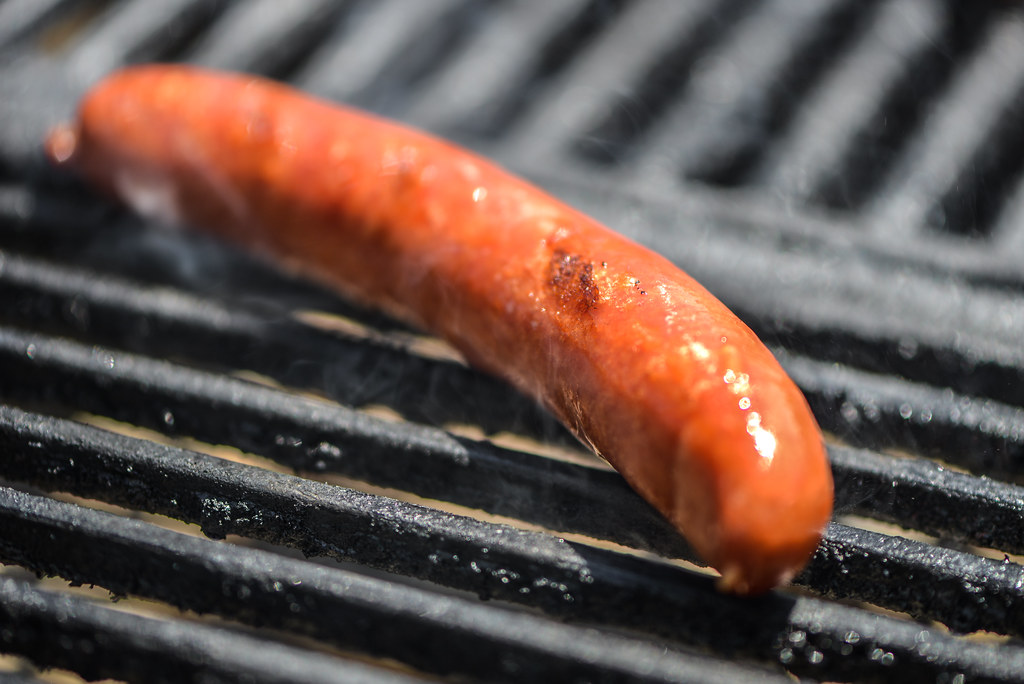 There's rarely a day in the summer when there aren't hot dogs in my refrigerator. No matter what fancy thing I may be grilling, they're always a welcome fallback for when a recipe goes wrong or I have guests over and need a little extra meat to throw on the grill.

On one level, cooking them is a somewhat foolproof process—they come precooked and their high fat content helps keep them moist even after they've been on the grill a little too long. But on another, there's definitely a difference between a good grilled hot dog and great one. Although it may sound a little counterintuitive, there are tricks to grilling these emulsified sausages that can make them the best they can be. 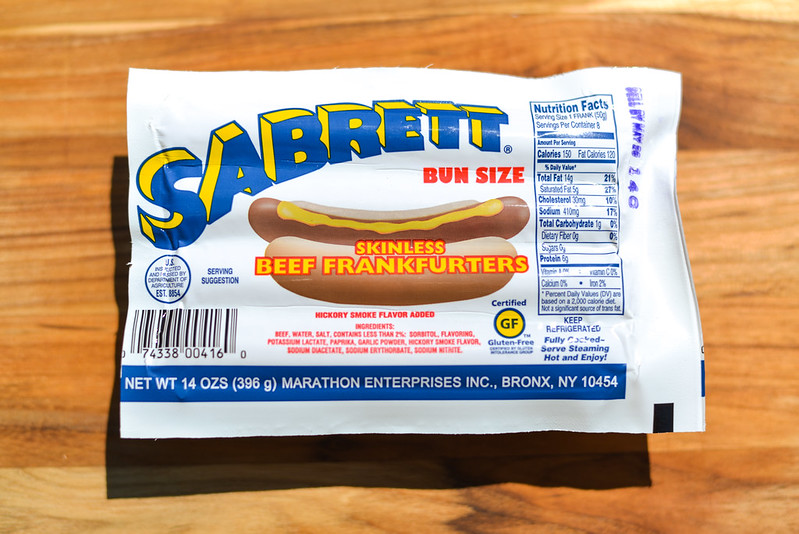 The first step to grilling the best hot dogs is picking the right ones. First, there's the type of meat. When I talk about hot dogs, I'm always referring to all-beef franks. Sure, there are pork, chicken, and turkey dogs out there, but none of those taste as good to me as beef. In my experience, beef is the only meat that can stand up to classic hot-dog seasonings, like garlic, onion, paprika, mace, mustard, and coriander, and still maintain its bold, meaty flavor.

You also have the choice of cured or uncured hot dogs. Cured hot dogs are made with sodium nitrite, which extends the shelf life, helps prevent nasty forms of bacteria, and gives the meat a reddish hue. Curing is pretty standard in hot-dog making, but some fear those additives for health reasons (I'm not one of them), so uncured dogs have been gaining traction in recent years. Many of these uncured brands will advertise "no nitrates or nitrites added," but that doesn't mean they have none at all. Instead they may contain nitrates (possibly even in larger doses) from natural sources, such as celery, which provide some of the benefits of regular cured dogs. 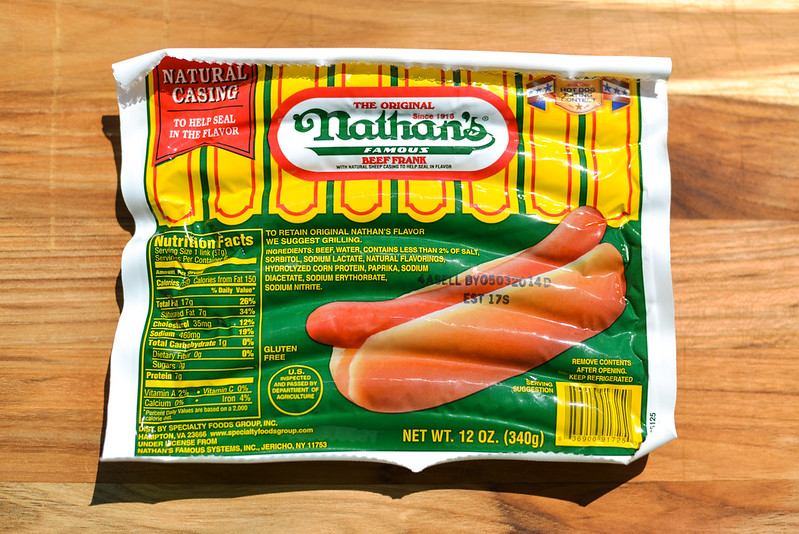 The final choice is between skinless franks or those in natural casings. Skinless dogs are cooked in a synthetic casing that is removed before they're packaged, and is what you find on most shelves these days. While hot dogs in natural casings are harder to find, I'm going to be frank and say you're doing yourself a disservice not to try to track them down. Hot dogs stuffed into sheep's casings have that snappy shell that, in my mind, makes a hot dog truly great. Natural casing dogs from Nathan's are easy to find in the summer in New York, and as soon as I notice them beginning to disappear after Labor Day, I buy a bunch of packages and freeze them to get me through the winter.

How to Grill a Skinless Hot Dog 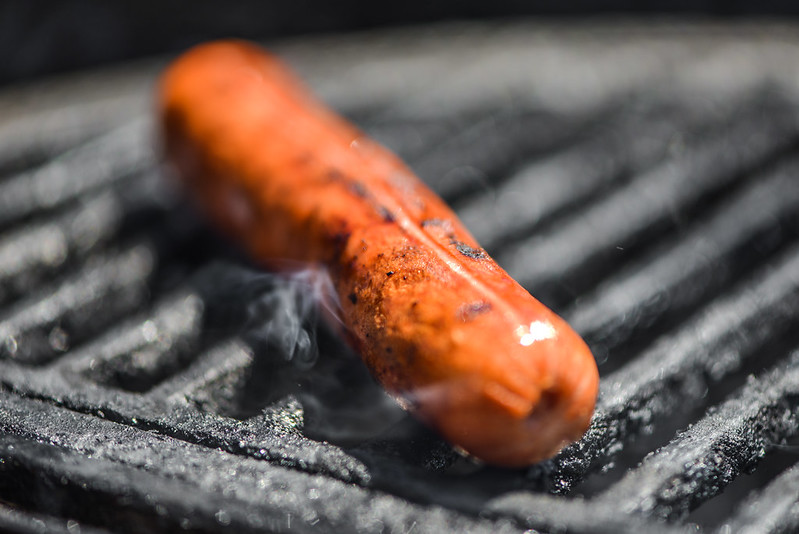 Because hot dogs are sold fully cooked, it may seem like all you need to do is put them over a hot fire until they're sufficiently heated through. That certainly works, but it also creates a suboptimal end product. I tried grilling both cased and skinless hot dogs directly over freshly lit coals and the results spoke for themselves. 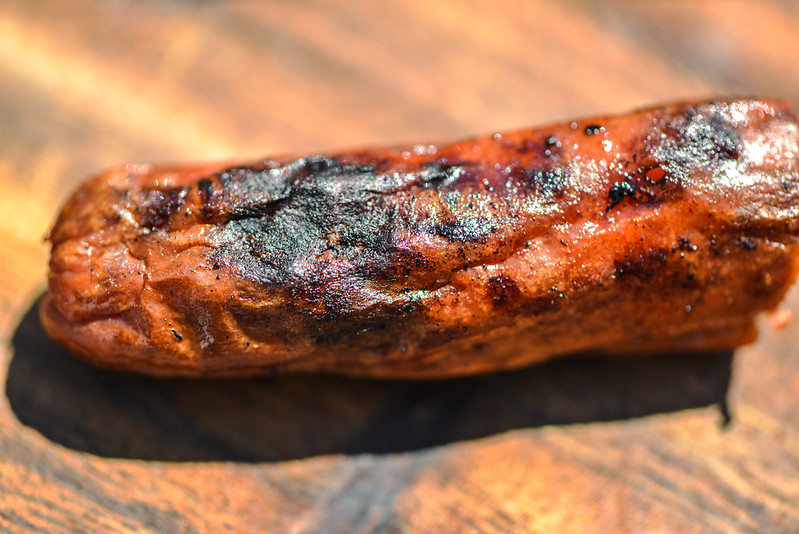 The skinless franks looked plump and juicy while grilling, but once removed from the heat, they deflated and shriveled up. The center of the sausage was still moist, but around the edges it began to dry out and had a papery, almost leathery exterior that added chew instead of snap. 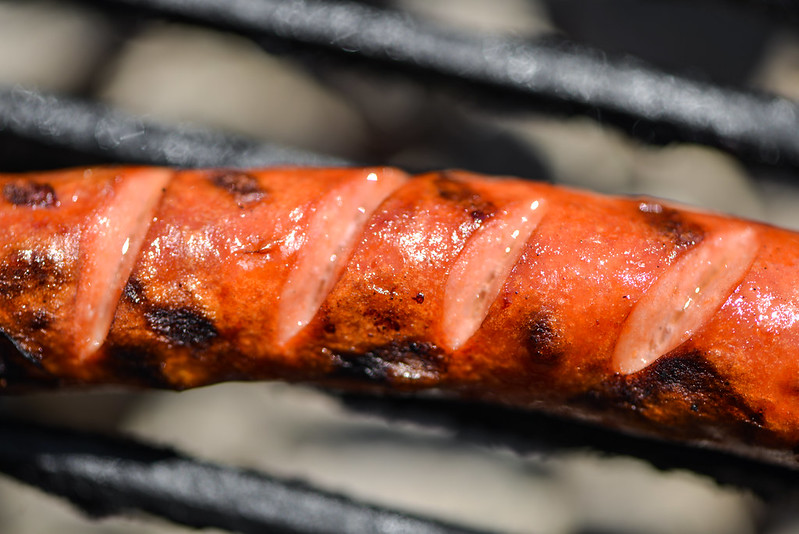 To prevent these unsightly and undesirable shriveled hot dogs, I've been slashing skinless franks for years. This entails making a few cuts into two opposite sides of the hot dog before grilling. Then, when on the grill, these slits expand open, which allows the heat to reach the center of the sausage more quickly, resulting in a shorter cooking time. Skinless hot dogs cooked this way stay plumper and juicier and don't suffer the same shriveling of the skin. 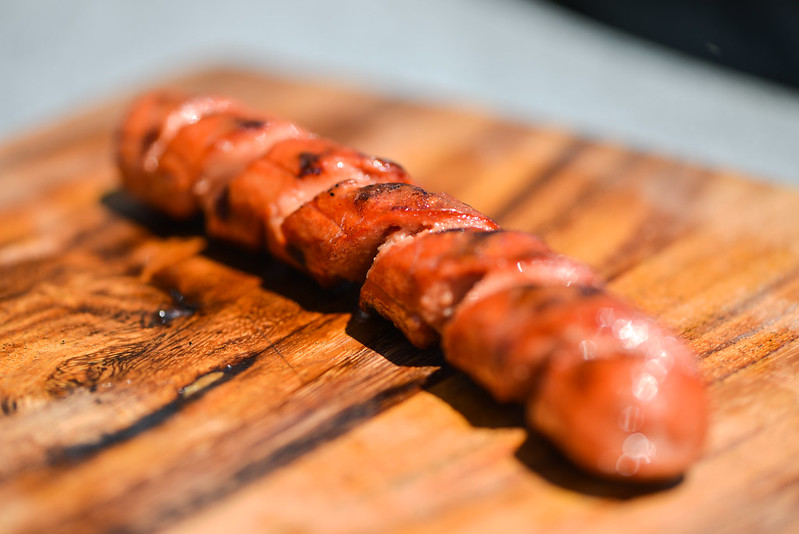 You can take this method one step further and spiral cut your hot dog by skewering it and making one long, spiraling cut along the entire length of the sausage. Lots of people love this method, but to me, the slashing technique is quicker and better. Sure, the spiral has a cool appearance and you get more crispness by increasing the hot dog's surface area, but it's also easier to overcook and dry out.

How to Grill a Natural Casing Hot Dog 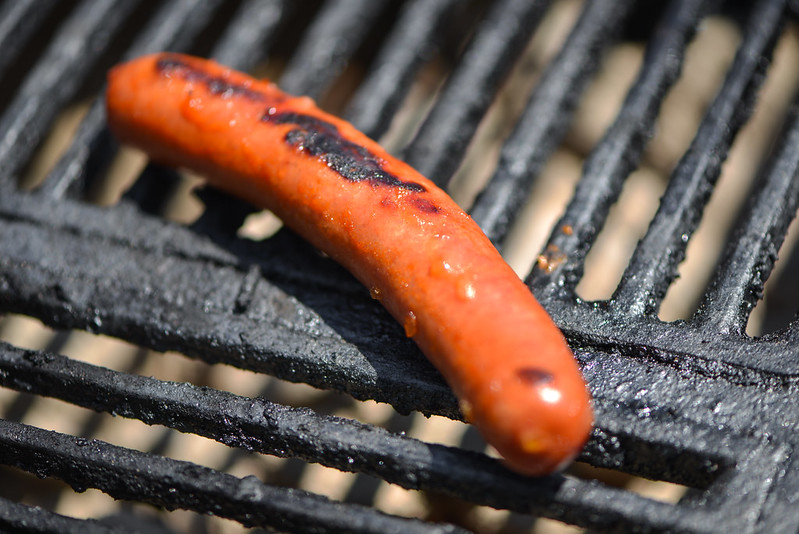 For cased dogs, I take a different approach. When cooked whole over direct heat, they fared better than the skinless, with the casing generally helping to protect the meat from drying and shriveling. But a small percentage of them burst and let essential juices leak out. 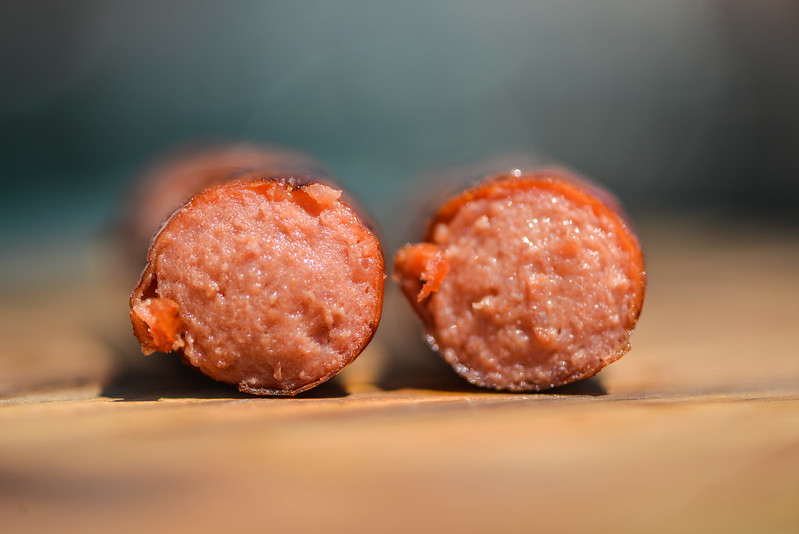 I wouldn't slash cased dogs, though, because those slits can further expand and tear during cooking. So, to make the absolute best hot dog I could, I turned to an old article from my editor over at Serious Eats, Kenji, on the science of grilling sausages. 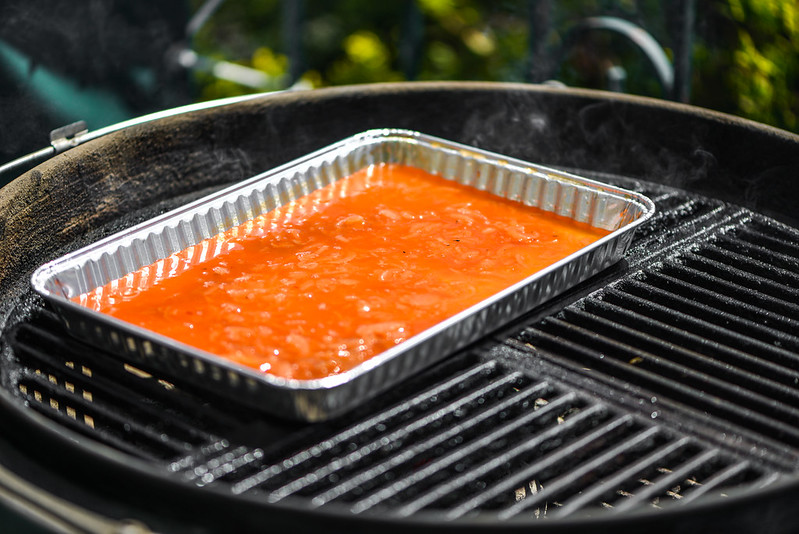 In that article, the best method was laid out as first simmering the sausages in a flavorful liquid over indirect heat until cooked through, then quickly searing them over direct heat. I totally get how this is best for fresh, uncooked sausages, but hadn't considered whether it would work for hot dogs as well. 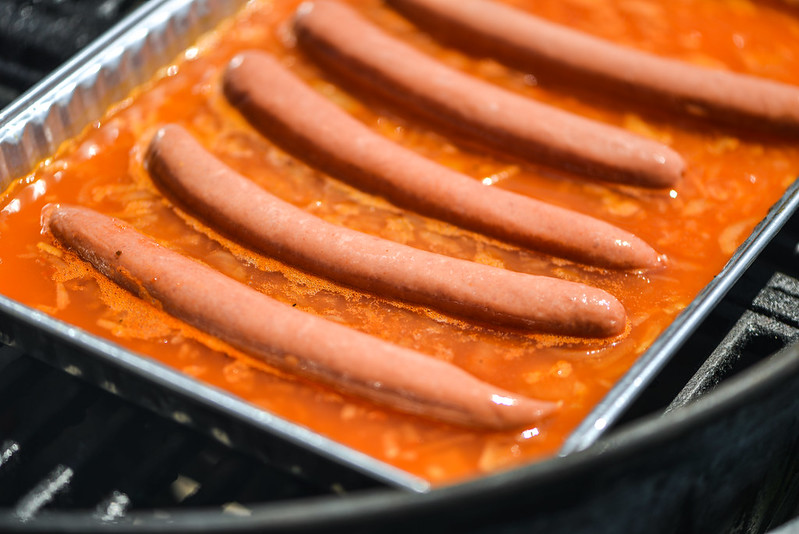 I finally gave it try, setting up a small disposable aluminum roasting pan filled with Sabrett's Onions in Sauce mixed with a can of beer. I brought that mixture to a simmer over direct heat on the grill, then slid it over to the cool side, added natural-casing Nathan's hot dogs, covered the grill, and let them cook until heated through. I then plucked the hot dogs from the liquid and grilled them over a hot fire where they charred super fast, without a single casing splitting. 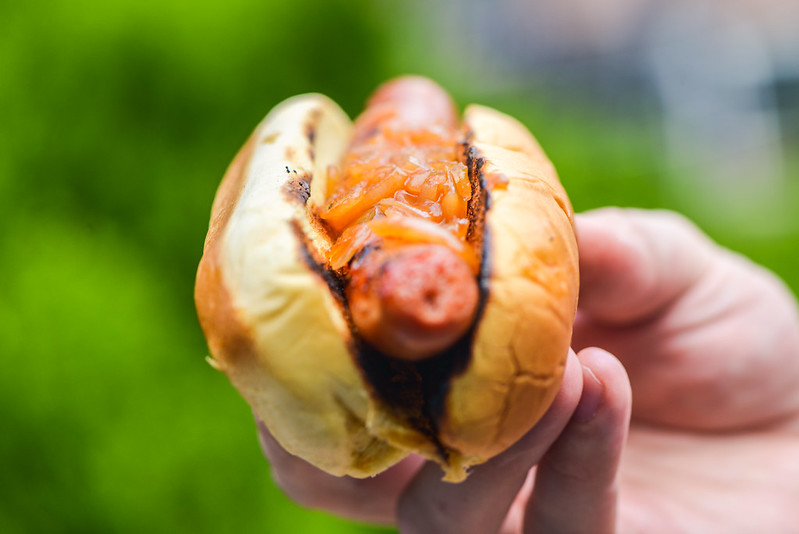 These were certainly the best of the lot that I made that day, juicy from edge to edge, with a great snap and a light char. I'm totally sold on this method for all hot dogs, including skinless ones, though I may sometimes still slash the skinless franks if I don't have enough room on the grill for a hot-dog hot tub. 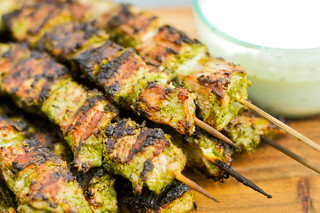 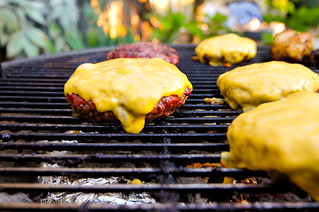 How to Throw a Killer Backyard BBQ