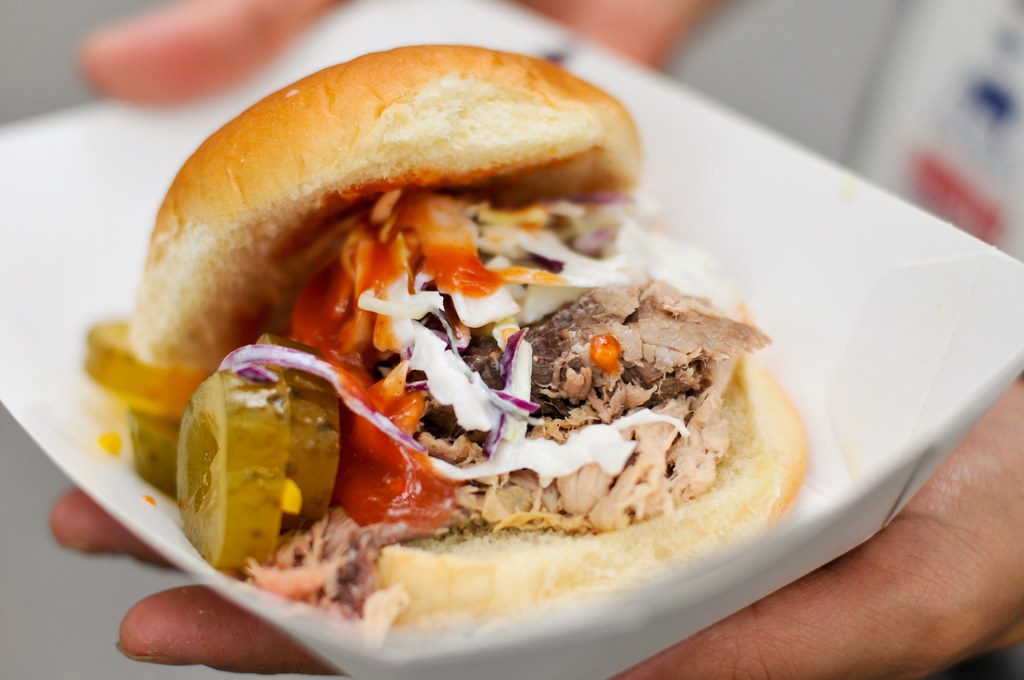 Hells yeah! In the 9th year of the Big Apple BBQ Block Party I finally accomplished what I've failed to due previously, sample every single piece barbecue being smoked up by the 16 pitmasters that assembled onto Madison Square Park this past weekend. I believe I've been to all of the previous Block Parties except two, and while I've strived so hard to meet meat my goal each summer, I ultimately left dejected and a feeling more like a glutton than meaty achiever. This has all changed now—I am triumphant, feeling well-deserved of my self-described title of "Meatmaster." In a celebration of my victory, you will now have to endure a mega-post of everything I ate on this Meatwave field trip, which would have never had been accomplished without the help the great Meatwavers I'm lucky to have as friends. 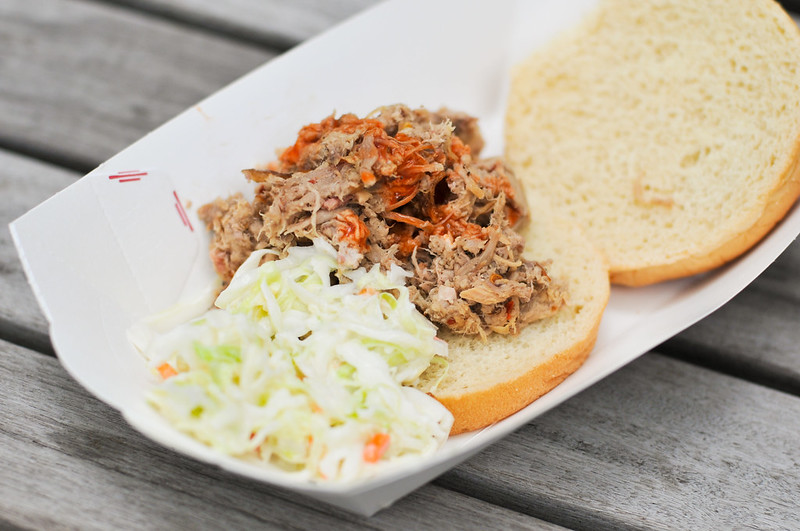 First thing we did this year was get in line for Ed Mitchell, whom I missed last year due to a shortage of swine by the end of the day. This year he was smoking whole hog and turkey in his stout, individual smokers. Although not quite the greatness I remember from years passed, the whole hog sandwich was still incredibly juicy with a nice vinegar and peppery kick. 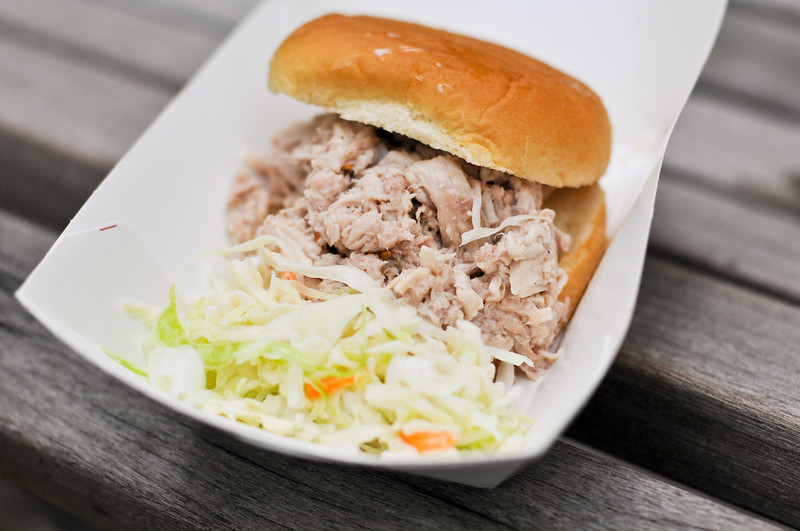 I think this is the first year turkey was on the menu at the Block Party, and there was no one better to tackle it than Ed. While I wish it had been smokier—there really wasn't any smoke flavor to speak of—the meat was still probably the moistest turkey I've every had. 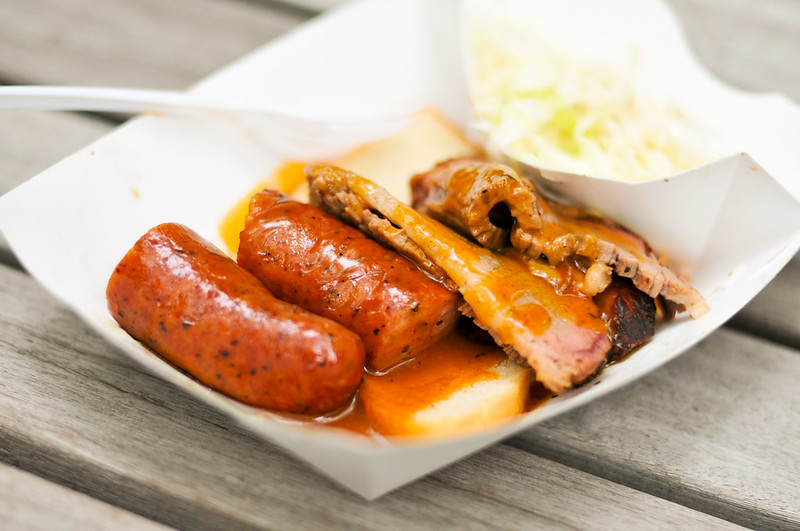 Salt Lick was next, since they were missed last year due to Pitmaster's Michael Rodriguez broken leg. Our brisket was smokey with a good beefiness, but on the dry side—other Meatwaver's were more fortunate with fattier cuts. The sausage, on the other hand, was excellent. Getting up into Southside territory, it was spicy and smokey with a great snap that oozed juice when bit into it. 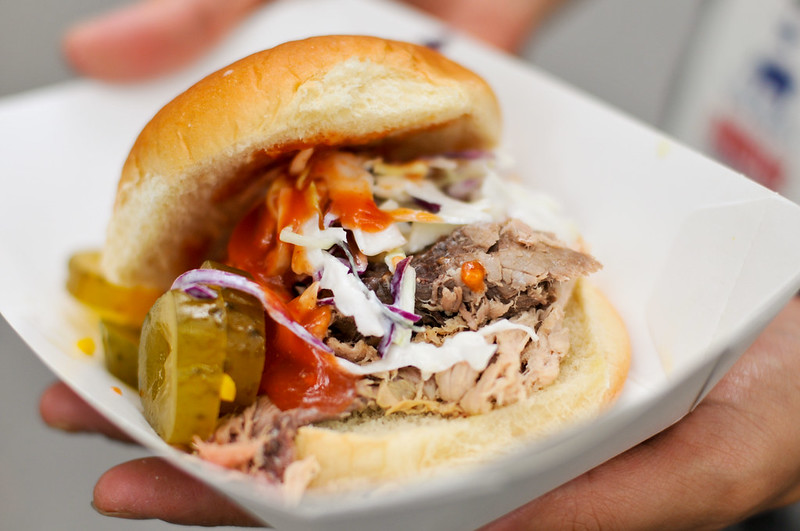 On to Martin's, who was also doing whole hog and was my favorite of last year. Again, another barbecue not living up to previous memories, this was at about the same level as Ed's, but had slightly sweeter flavor and was not as chopped. 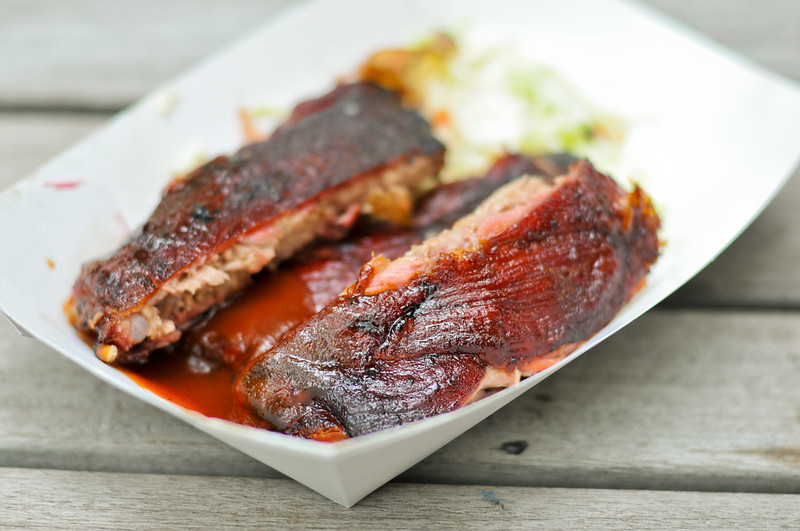 My first Baker's Ribs from Dallas, which had an excellent looking bark. As I tried to tear a piece off to try, all the meat came clean off the rib, meaning the ribs were a bit overdone. Those great looks didn't translate into a whole lot of flavor, as I was underwhelmed by the pretty neutral tasting meat and crust. 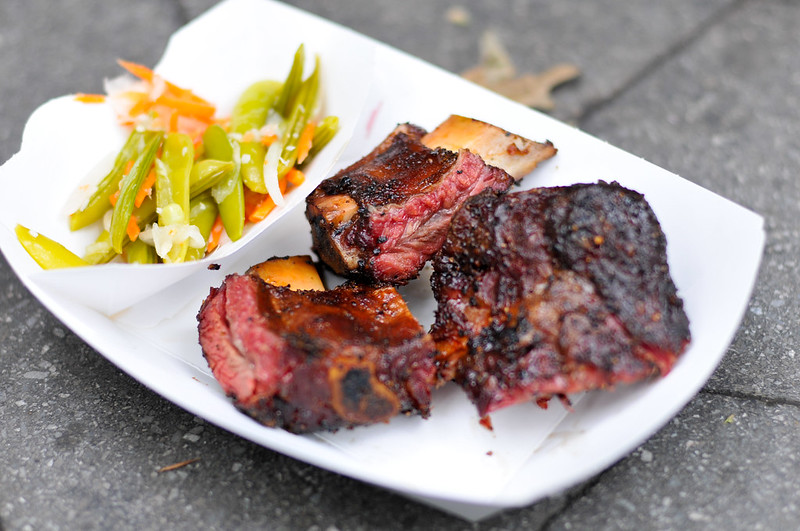 I usually tell people to stick to non-New York joints at the Block Party, but that might have to change as the pitmasters in my home city have been proving themselves year after year. Kenny Callaghan's Texas Salt & Pepper Beef Ribs are just a pleasure to eat every time I have them. Insane smokiness—achieved by charcoal alone—paired with a deep, peppery crust and a heavy beefiness made this a real standout of the offerings. 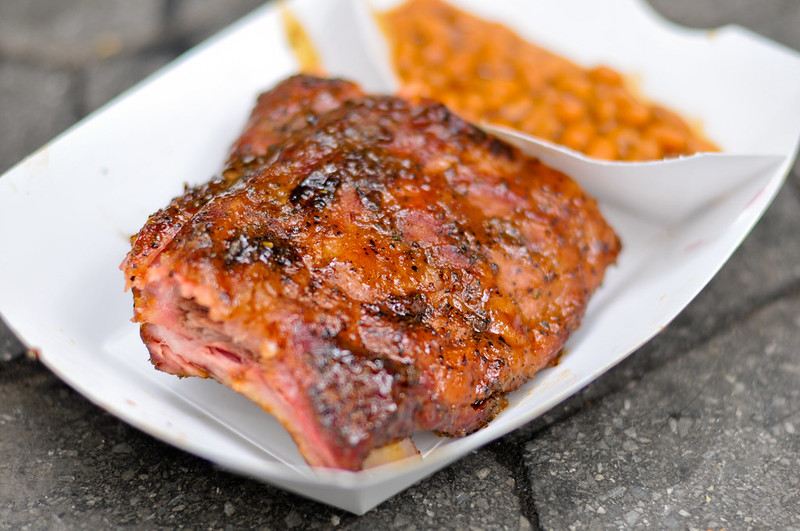 Pappy's Smokiness knows how to barbecue a rib incredibly well. Having the right pull from the bone and nice smokiness, my only qualm with these were their sugar-heavy rub. A total matter of preference, I veer toward the spicy, so these ribs just aren't my cup of tea, although I recognize the skill that goes into them. 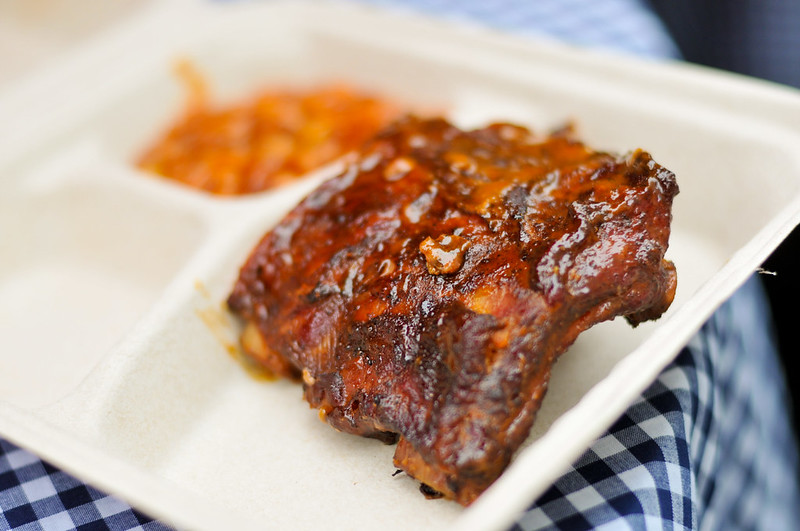 Mike Mill's baby backs almost never fail to impress. They have all the qualities of the expertly smoked ribs of Pappy's, but a slightly spicy, slightly sweet finish that strikes the right balance without overpowering any of the natural porcine flavors. 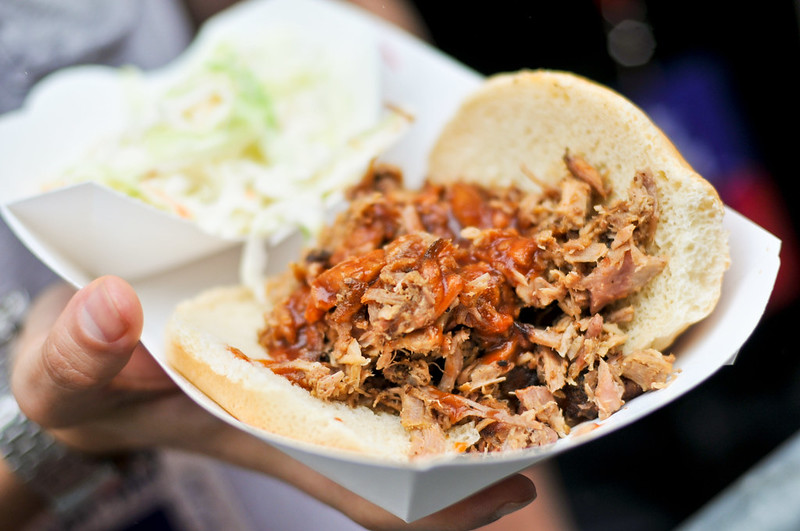 Jimmy Hagood from BlackJack Barbecue knows how to show off his cue—chopping pork shoulders in front of a crowd and feeding the first cuts to some lucky ladies enduring the long lines for a sandwich. He's turning out really juicy pork that has a light smokiness, but is ultimately missing a little something. 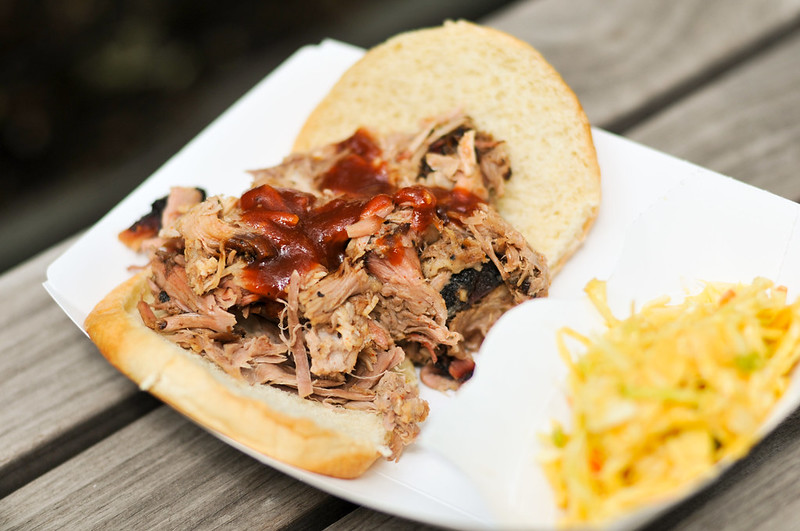 Now we're on day 2, where we went to Big Bob Gibson's first to beat the inevitably long lines that were already forming at 10:45am. My clear favorite pork shoulder from last year, this year was a little off. Tasting more injection than pork, the loss of balance to its natural flavor dropped this sandwich down a notch this year—but just a notch, it was still pretty freaking good. 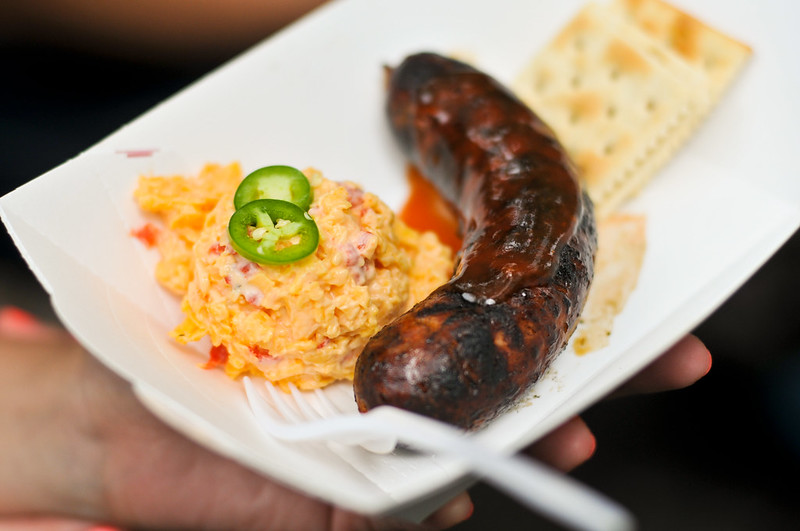 I love me a good sausage, but the real attraction at Jim 'N Nick's Bar-B-Q is the pimento cheese. Going as far as printing the recipe for it on his business card, Drew Robinson is a master of this excellent cheese spread, while the sausage I had was spiced nicely but a bit too charred and tad too dry to compete with the likes of the Salt Lick. 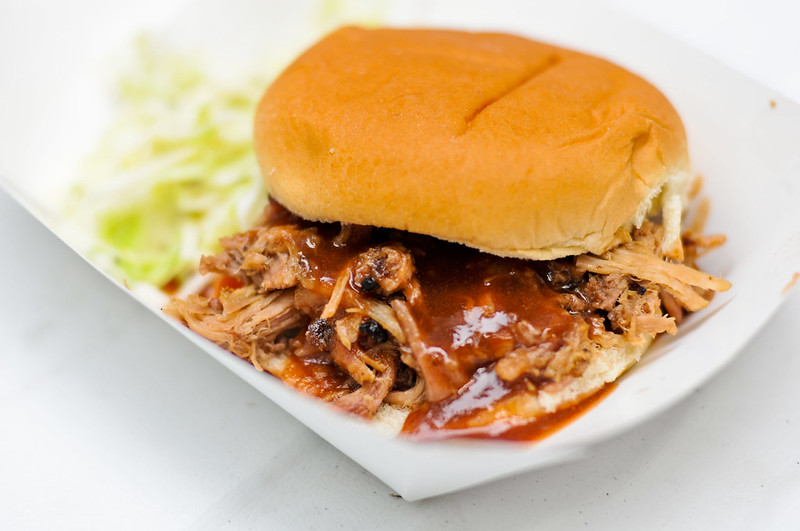 Ubon's are the greatest of the lot to stop in and chat about barbecue with at the party. They're also churning out a moist and tender pork shoulder, although it suffers that similar lack of something special as BlackJack's. On the other hand, Ubon's has an excellent sauce to top their pork, which balances things out. 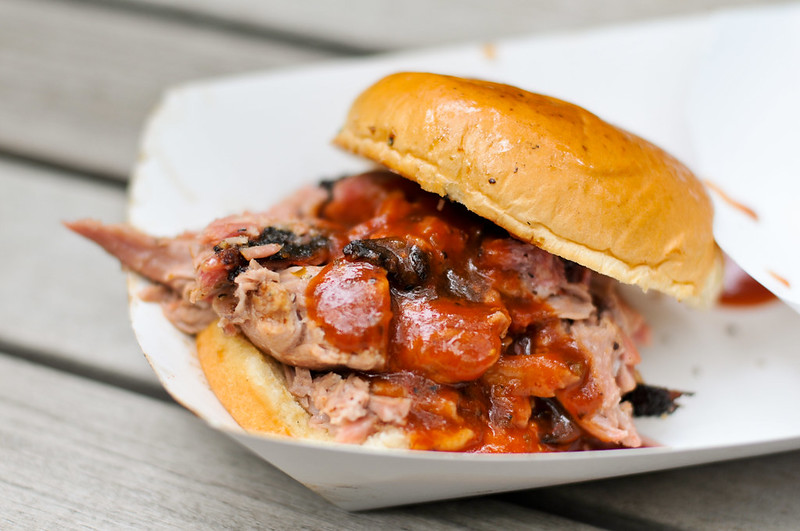 Taking the prize for my favorite of the day was Dinosaur Bar-B-Que. I've been speaking to gospel of John Stage's Block Party pulled pork for years now, but he was really rocking it this weekend. Full of smoky flavor, porky juice, and a nice pepperiness, this was everything I think pulled pork should be. 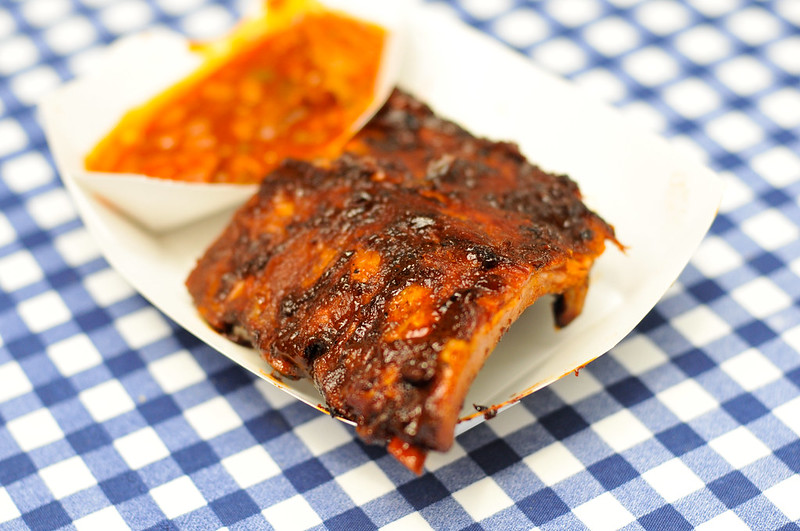 I've never had Rack & Soul, but after winning the Serious Eats NYC rib-off, they've been on my short list of must-haves. Unfortunately they were off today. Dry and little tough, with the type of sticky, sugary crust that doesn't appeal much to me, I was left disappointed. My partner in barbecue-crime for the weekend, James, confirmed these weren't up to the quality in the Serious Eats sample, so I'll have to go to restaurant and give them another shot. 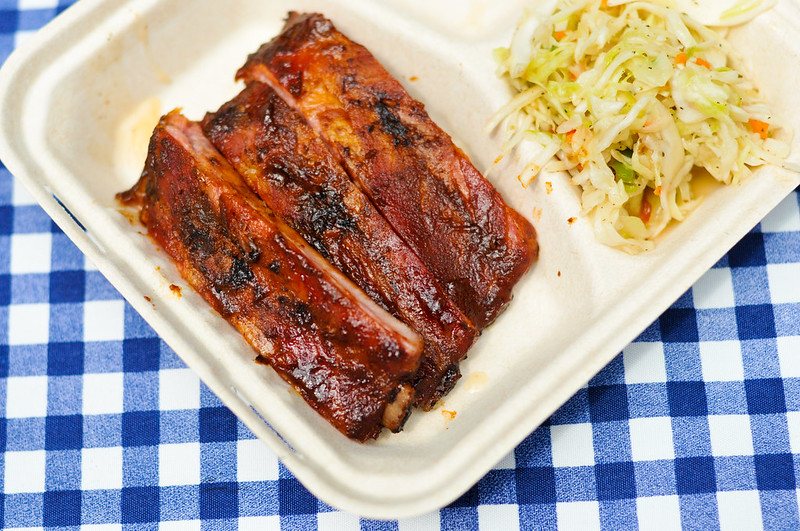 Another set of well executed ribs, these from Tommy Houston of Checkered Pig. Although nothing mind-blowing, these ribs were cooked perfectly and had a nice bark to sauce balance that made them a pleasure to eat. Now only if they'd let him make his excellent hush puppies at the Block Party! 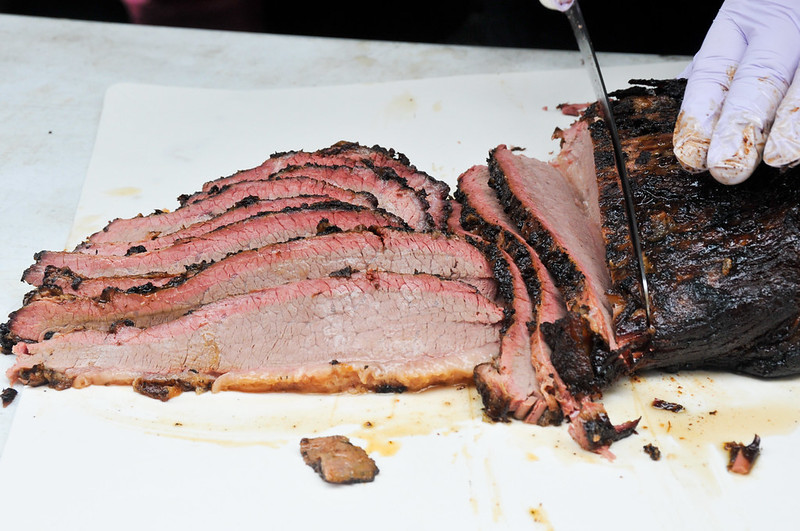 My mouth was watering watching Myron Mixon skillfully slice a brisket that looked incredibly smoky and juicy. Anticipation only built as we waited for him to finish the entire side of beef, so much so that my hopes may have been too high when I finally tried it. Lacking flavor, this brisket fell flat, which was a sentiment I felt after having a slice last year as well—I was hoping the presence of Myron this year would correct that. 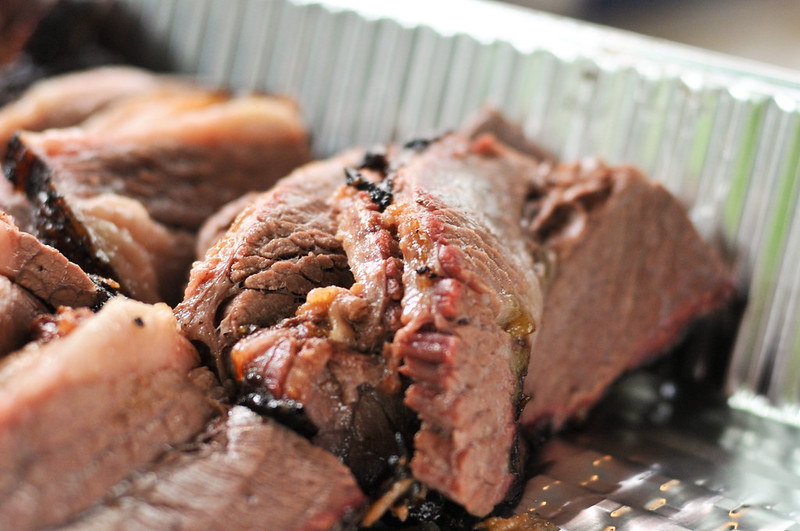 Ending the barbecue on a high note, Hill Country's brisket was kickin'. I got a nice fatty piece that had crazy flavor throughout and an excellent spicy bark that I made sure to get into every bite. Like I said before, New York has really been upping their barbecue game and Hill Country is further proof that they shouldn't be discounted in your future Block Party endeavors. 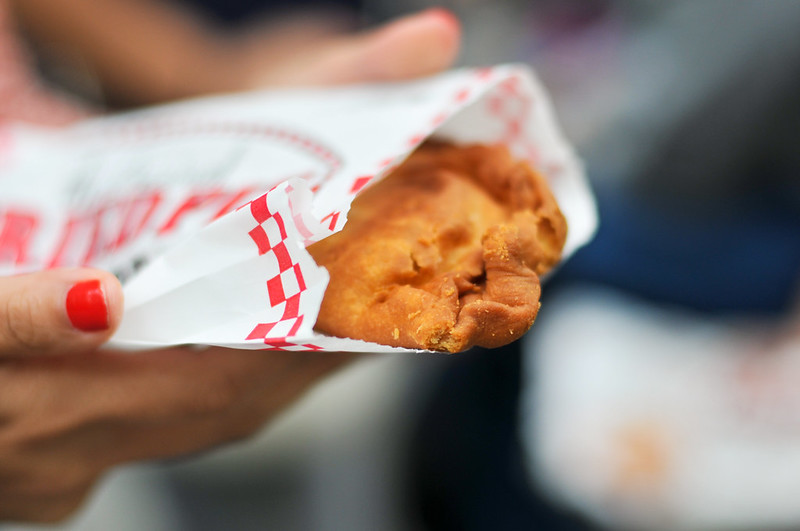 Not to forget dessert, we also picked up a series of pies from the unorganized mess that was The Original Fried Pie Shop. Luckily the pies were better than their service, with blackberry being my pie of choice. 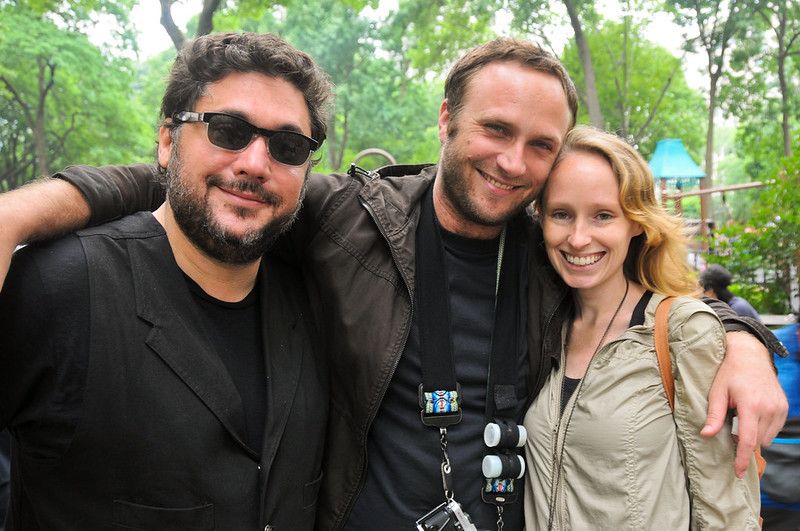 Whew, enough barbecue for you? No? Me neither, but that was a pretty impressive spread, right? Getting through all that 'cue would not have been possible without my most excellent friends who joined me on this quest. First to get there on Saturday was Karla and Craig along with their friend Jay (I think...sorry if I'm remembering his name incorrectly). They made a great early effort, eating more barbecue than one really should before lunch time. 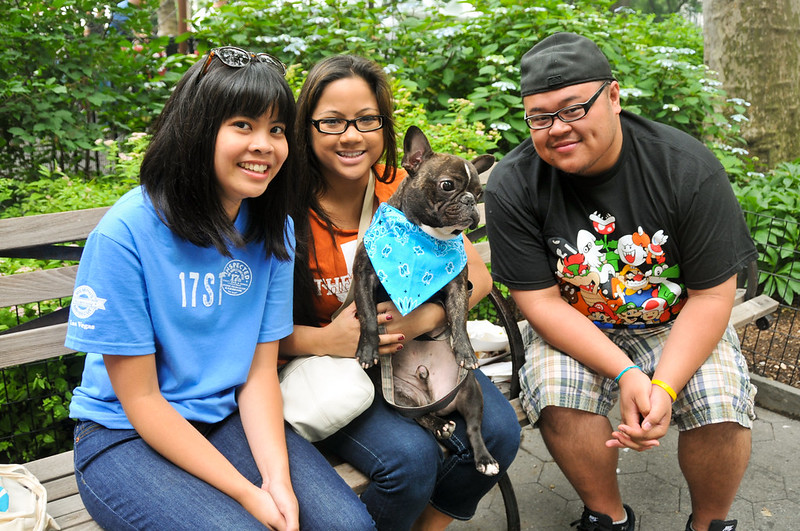 Trecyi and Tito did a double day adventure with us, eating nearly as much as I did. Of course, my beautiful wife Kris was with me the whole time and is now also an honorary member of 17th Street! Special thanks to my friend Amy for the hospitality she's shown us throughout the years. 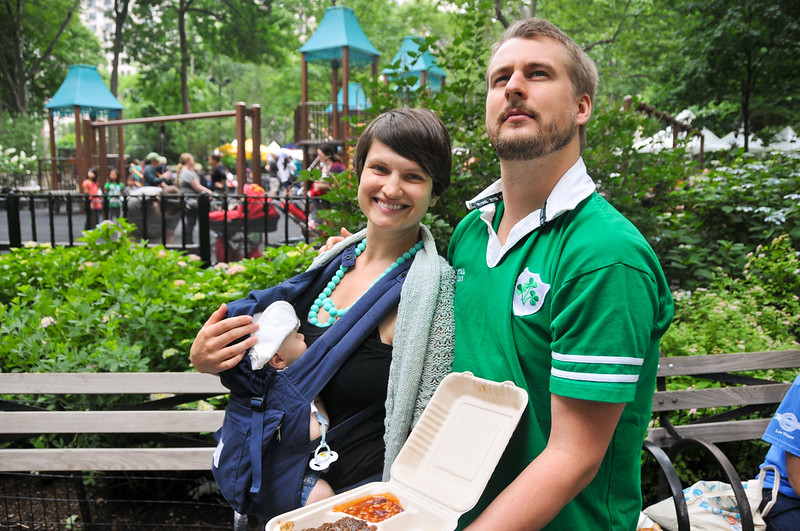 Nick and Sara also came with Block Party first-timer Marley. Although the little guy isn't quite at barbecue eating age yet, Mom and Dad were more than happy to eat his share.

Another shout-out goes to Susan and Michael, who I failed to get a photo of, but made it out to their first, of hopefully many, Meatwaves of the season. 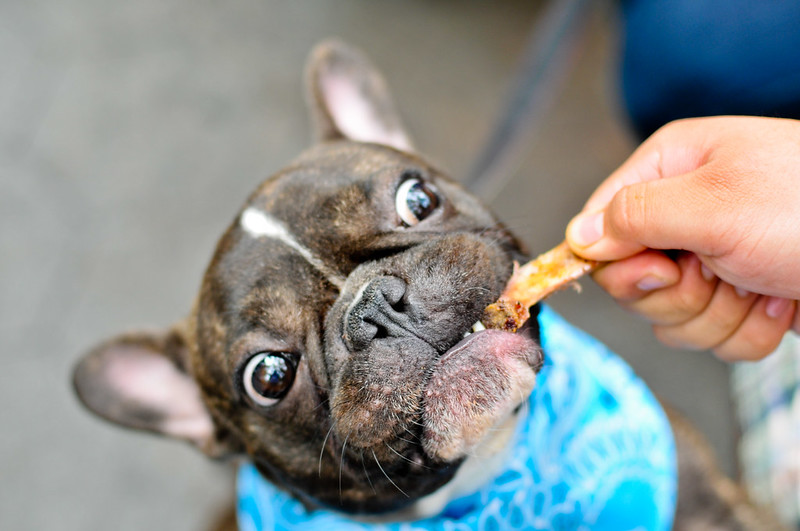 Last, but not least, my favorite Frenchie in the whole wide world, Porkchop! Given the chance, Porkchop would put us all to shame with his serious barbecue eating skills, which is just one reason he's so close to my heart. Maybe next year I'll have to make a bet with the little fella: seconds on all or face a losers disgrace. 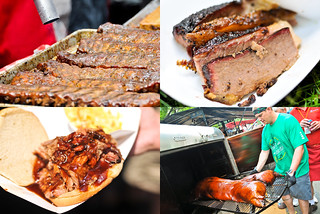